Magda, Aristede and Jamison come up from the cellar. She begs them not to make her take them to Barnabas' coffin, but they insist. 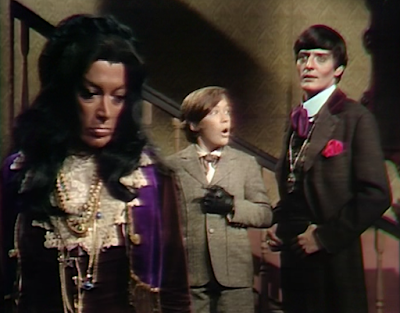 Magda brings Aristede and Jamison to the room with Barnabas' coffin. She goes to leave, and Aristede tells her she has not been dismissed. She doesn't want to watch him die. Aristede picks up a piece of wood and a mallet to stake him. Jamison assures him that Barnabas is powerless. Magda again tries to leave, but Jamison says she can't leave, because they haven't seen what they came to see yet. Aristede opens the coffin. It's empty. He asks Magda where he is. She explains this is where he stays, and she doesn't know where he is. Jamison closes the coffin and says she's telling the truth. He believes she doesn't know where Barnabas is. He says Barnabas will come to Magda tonight, and tell her where his new hiding place is. Then, she will tell them, and they will take care of Barnabas tomorrow. Jamison suggests there could be valuable information at the old house. 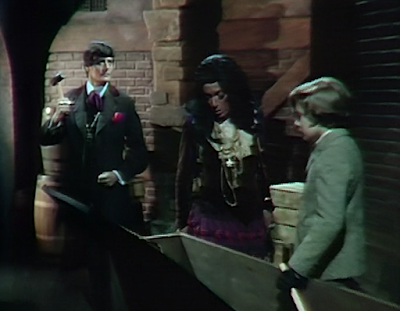 Aristede comes downstairs with Barnabas' papers and diaries. He doesn't understand what the point is searching for them. Jamison says that somewhere in the house is something that can help him. He turns to his bookshelf. Aristede points out Shakespeare. Jamison finds the Collins' Family history, with a publication date in the future—1965. He says the book is what they were meant to find. 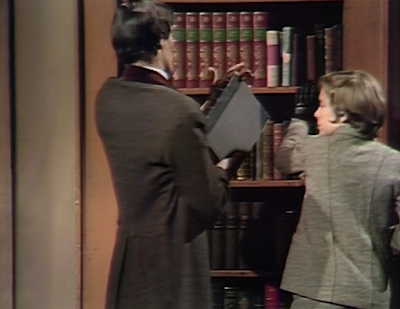 Aristede reads the family history, and doesn't understand how a book could be published in the future. He thinks that it's too detailed to just be a joke. Jamison explains that someone has traveled through time. And if he were to do the same, he could live forever. He sends Aristede to fetch Quentin. 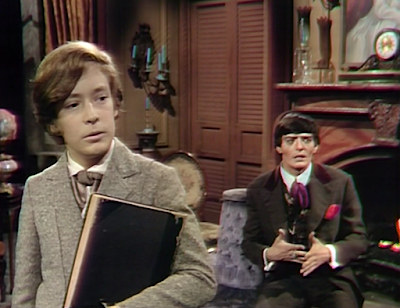 Charity tosses and turns in her sleep. She dreams of Quentin. In her dream, she gets up when she hears him calling. She then hears a wolf howling. Next she hears Quentin's theme, and sees Jamison standing in front of the portrait of Quentin. She asks if the portrait changed for him, too. He laughs at her, and tells her Quentin is a lost soul. He tells her Quentin is hiding from her. 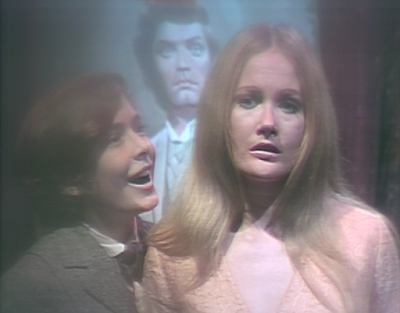 Quentin appears before her. He asks if she knows the truth. He asks if she wants to make him feel good, and tells her to sing for him. She does, and she transforms into Pansy Faye. She stops and can't find Quentin. She goes outside and finds him in the arms of another woman. She asks who the woman is, and she disappears. 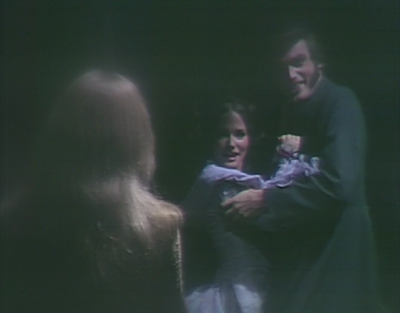 Quentin leaves, and Magda appears, telling her to forget Quentin. She tells Charity that she knows his secret. Magda leaves and the other woman appears. Behind her, Quentin appears. She tells Quentin that she hates him as he kisses the other woman. She wakes from her dream, and decides Magda will know what it means. 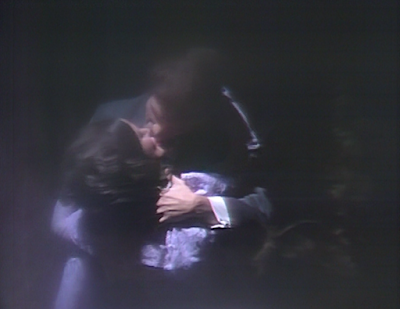 Aristede drags Magda in to see Jamison. Jamison asks her who brought the Collins family history to the past. She tells him that she's never seen the book before. They press her, and she says that a girl named Vicki brought it from his own time: 1969. They ask why, and she says it had to do with a sick child in 1969. They ask how he traveled through time, and she says she does no. Jamison asks who else knows about Barnabas. She says that no one else knows. He says they'll have to convince Barnabas that it's better to travel with a companion. 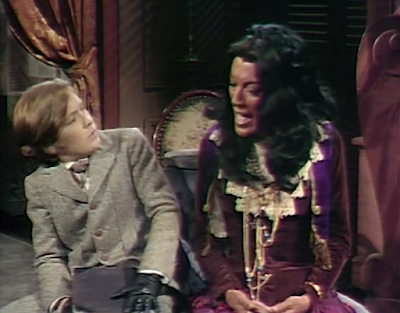 Charity stumbles across Quentin's unconscious body in the woods. She goes to get help, and screams when she sees a bloody woman on the ground next to him. The woman stirs, and calls Quentin's name. 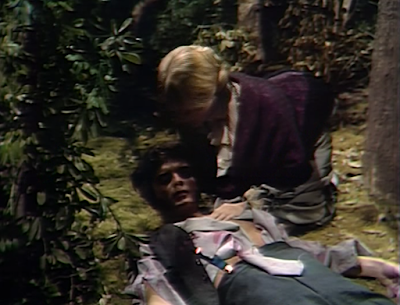 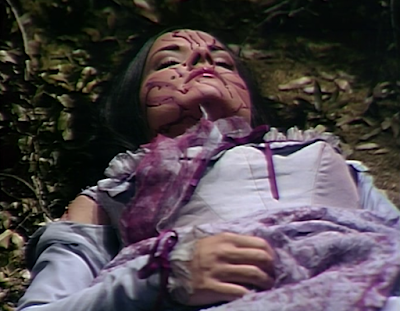 John: I think Barnabas traveled into the future to read our blog. That, or for some other reason he was finally smart enough to put a back-up plan in place for his daily sleeping arrangements.

Christine: Since when did Barnabas ever sleep in a plain old, no-frills pinewood box anyway? In Episode 781, Trask marked his nice, plush, satin lined coffin with a cross and chained it up so he couldn't use it, but in Episode 784, it's in the cave where Evan Hanley finds him. It could be he left it there, but why would he leave his favorite coffin in the cave and keep his spartan backup at the Old House, instead of the other way around? 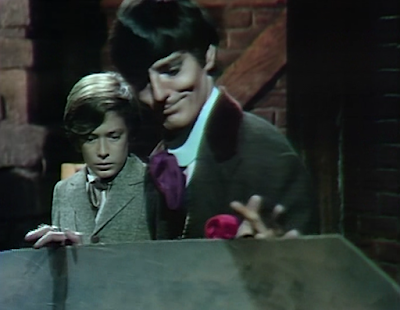 John: Again, I'm amused that Petofi waited 99 years and 11 months before he worried about coming up with a plan to survive. Does he really think time-travel will save his butt at this point?

Christine: I think his plan to survive was to get the Hand back, though he's not been very successful in that endeavor. Perhaps possessing the mind of a young boy is having a deleterious effect on his thought process.

John: I wonder if they decided to let Quentin's latest victim live long enough to say his name so they wouldn't have to depend on her staying still to play dead?

Christine: I wonder if Charity is obtaining some of Pansy Faye's mentalist powers from her possession. I initially thought Petofi may have sent her the dream, but he was too busy grooving on the Collins family history book and dreaming about time travel to have done so.