Judith sees Minerva in the drawing room, but tells Trask that she doesn't. Trask tells her to repeat that she is Mrs. Trask. He sends her up to her room. She asks if he'll be joining her, and he says he has things to do. He asks her if she's afraid, and she says she's not. She looks back at Minerva once more, who looks back at her. She then heads upstairs. Minerva follows her. At the top of the stairs, Judith turns and tells her not to come any closer. 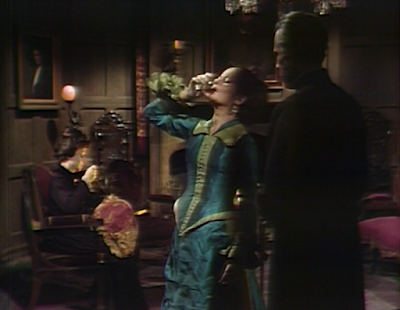 Judith locks herself in her room, but sees Minerva is already inside. Trask surprises her, and Judith tells him that she followed her into her room. She points to her in a rocking chair, and Trask denies anyone is there. He grabs her and forces her near the rocker. She runs from him. He asks why she's making a demon of Minerva. He slaps her, and tells her that's better. He tells her to stop crying and listen to him. He tells her that Edward is disturbed by her recent behavior, and is considering having her institutionalized. She can't believe it. Judith asks Trask to make Minerva stop rocking. He says he can't bear talking to her like this. She begs him not to leave her alone with Minerva, but he does. He locks the door behind him. He tells her that he's going to pray for her. 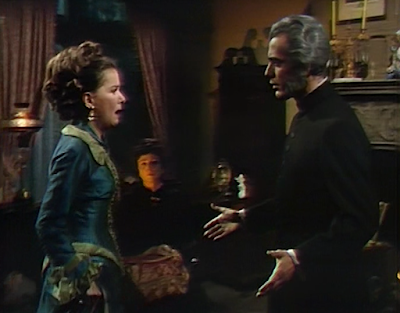 Magda goes to the Gaol to see mangled-face Quentin. She tells him that Barnabas is coming to get him out. The deputy comes in to see if she's had any luck with the stranger. She says they won't know until later, and leaves. 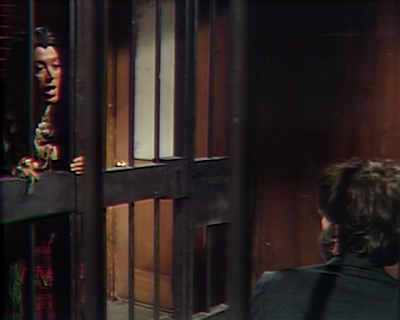 Judith tells Minerva that she won't get her. Trask returns, and Judith thanks him for praying for her. She tells him that she's rid of her illusion, and that she no longer sees Minerva. He asks if she's sure, and reminds her that she lied to him once before. He says he truly hopes so, but points out this isn't the first time that she was disturbed. 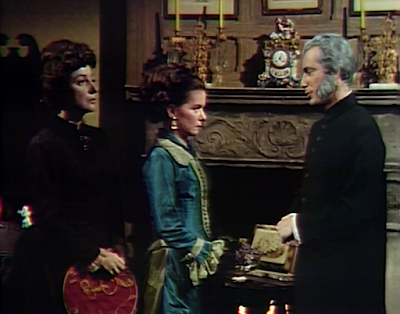 He wonders if something about her reaches out to unnatural creatures. She reminds him that his own daughter was bitten by a vampire. She starts downstairs, and he tells her to stay and rest. He tells her that she could learn to sew. He describes how Minerva used to sew, as she continues to do so in the rocking chair. He leaves Judith in the room with Minerva. 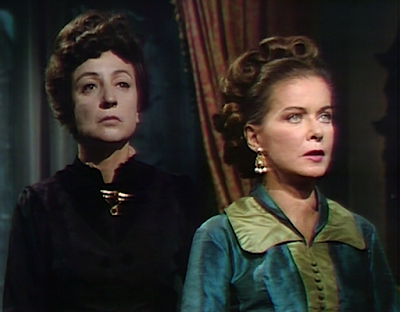 Magda arrives at Collinwood, and tells Trask Judith sent for her. She starts upstairs, and Trask tells her they haven't finished talking. He says she wouldn't want her sister's two children sent away. She asks what he wants her to do. He starts by telling her to address Judith as Mrs. Trask. 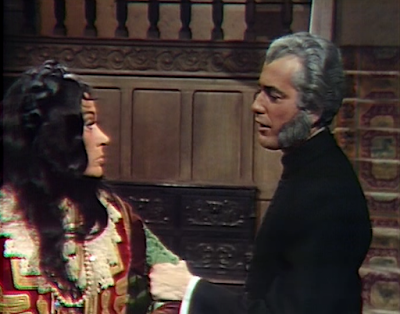 A bat flaps outside of the Gaol. Quentin hears a struggle in the lobby, followed by approaching footsteps. The cell door opens, and he is able to escape, past the deputy who has two bloody bite marks on his neck. 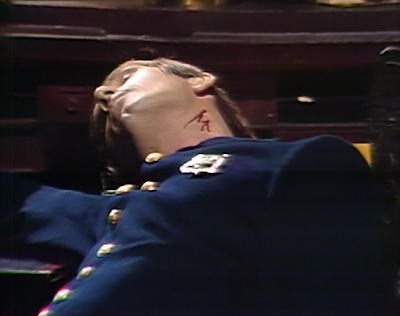 Magda arrives in Judith's room. Judith says the ghost of Mrs. Trask vanished minutes ago. She says she was sure Magda would be able to see her. She then notices that Minerva is back in the rocking chair. She asks Magda to confirm that she can see her, and she denies that she can. 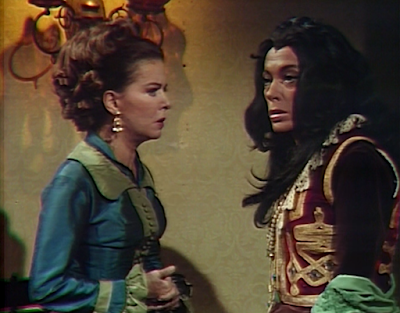 Magda comes downstairs and tells Trask that she denied seeing Minerva's ghost.  He tells her that her business is finished. She says she recognizes him for what he is—a swine! 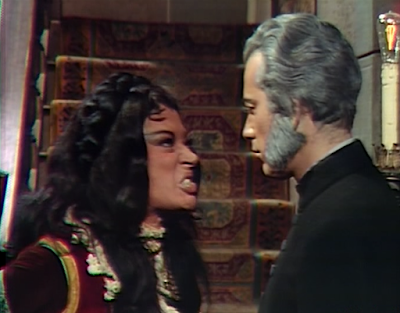 In the middle of the night, mangled-face Quentin arrives at Collinwood. He looks around and wonders why he's there. He plays the record on the Victrola, which is his theme. 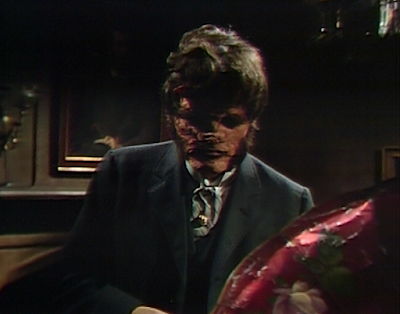 Judith hears the music downstairs and goes to investigate.

Quentin listens to his theme, and begins to recite the lyrics. Judith enters, and screams when she sees the mangled-face man. He tells her that he's Quentin. She says she's afraid, and refuses to believe he's her brother. He tells her the police are after him. She turns to leave, and runs into the ghost of Minerva, poised with a knife and ready to strike! 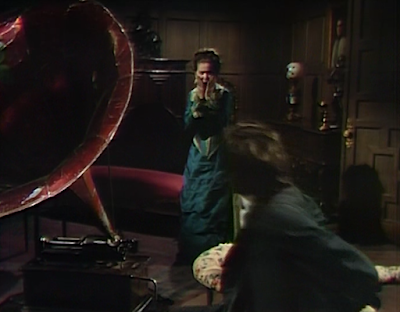 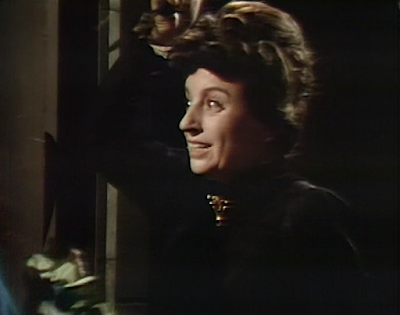 John: I know that we've come to believe Trask was an abusive guy, but even I must admit to being surprised when he slapped Judith out of the blue. I guess the silver lining is that he appeared to feel better after doing so. 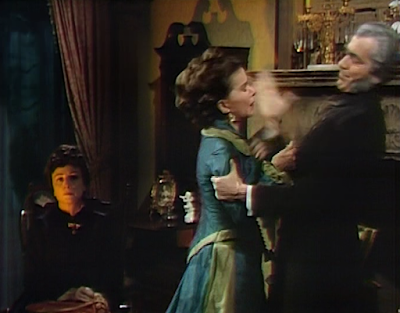 Christine: I wasn't surprised by the slap, since he has a history of slapping women, but I was surprised by the delayed sound of his slap. It's always great to have a villain to hate on the show, and Gregory Trask is one of the most loathsome we've seen yet. Magda is right, he is the lowest! Too bad she didn't have the guts to tell Judith that her husband asked her to deny seeing Minerva, and conspire with her to turn the tables on him. 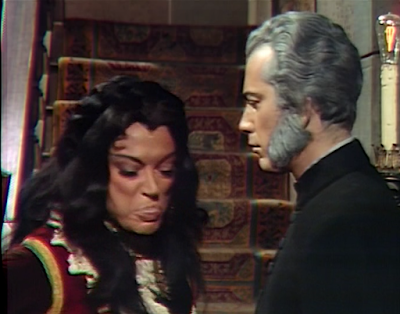 John: I was a little troubled by Judith today. I would be willing to buy that she developed a comfort level ignoring Minerva's ghost, since she really didn't do anything threatening (until the end of the episode), but then she would seem to revert back to sheer terror at her presence.

Christine: I never enjoy when a storyline requires Joan Bennett to act like a helpless woman. That type of role just doesn't suit her well.

John: Forget what he looks like with the mangled-face—how is it that Judith could not recognize Quentin? I mean, he's as tall as Quentin, he sounds exactly like Quentin, and he dresses in Quentin's only outfit. Even the werewolf doesn't dress in Quentin's clothes!

Christine: And he's reciting the lyrics to his theme song. Perhaps it's another effect of the Hand to make a person unrecognizable despite the fact that they're totally recognizable. As with Evan, Quentin's mangled face deteriorated even more today. So, I guess Hanley is controlling Minerva's apparition after all, because I would expect Minerva's ghost to go after her ex-husband with the knife before Judith or anyone else. 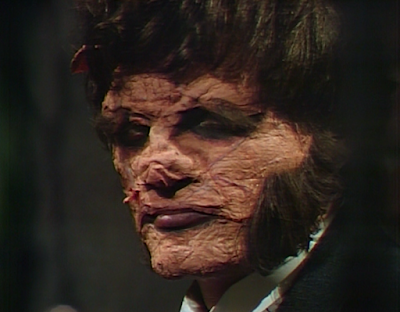 I often wonder what the TV viewers in 1969 thought of all this. This is my 3rd trip thru the entire series and even with repeated viewings and all the discussion we now have on social media, I'm still perplexed by some of the happenings. I guess that's one reason this particular show continues to fascinate after all these years!