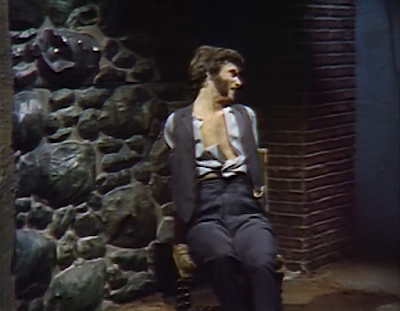 Having reverted from his werewolf form, Quentin is tied to a chair somewhere. Aristede comes downstairs and tells him that when he wants something, he'll let nothing get in the way. Quentin says he doesn't have the Hand anymore. Aristede says he knows, and tells Quentin that he's going to help get it back as he unveils a pendulum. 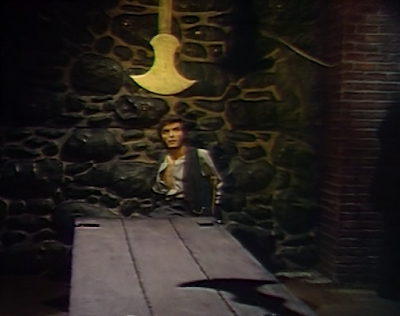 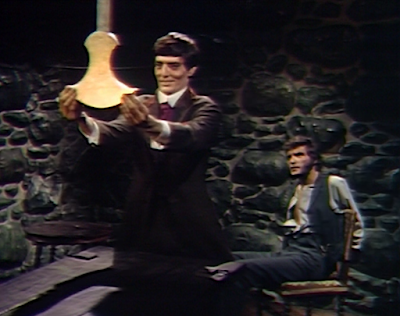 Barnabas comes to Collinwood to see Angelique. He says something important happened after she left. She tells him she has gone to great pains to disassociate herself from him. He tells her that he needs her to give him the Hand. He says that a gypsy has come to end Quentin's curse, but she needs the Hand.  Angelique asks if she intends to keep the Hand, and he says that's her price. She refuses. He tells her that if she has any feelings, she'd be willing to help Quentin. She asks him to promise not to interfere with her plans for Quentin, and she will give him the hand. He tries to explain how he's trying to save people in the future. She says she doesn't care, and he agrees not to interfere. She tells him to meet her in the woods and she will bring the Hand. He turns to a bat and flies off. 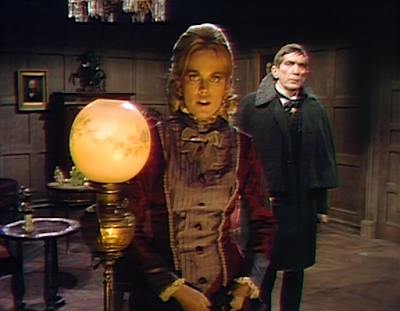 Astride has Quentin get on the table under the pendulum. He does, at knife-point. Aristede ties him down. Quentin offers to help him get the Hand, and Aristede says the plan has already been set in motion. He adds that his life depends on someone who loves him. He stuffs a handkerchief in Quentin's mouth so he can't scream, and then swings the pendulum. 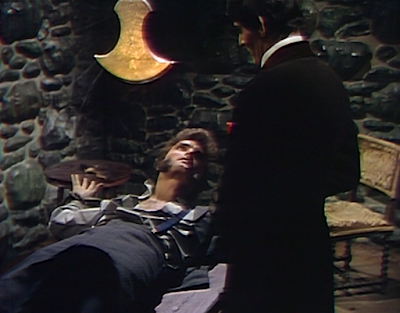 Barnabas returns to the old house with the box. He opens it to show the Hand to Julianka. She says she needs the Hand in order to remove the curse. He gives it to her. She pulls a knife on him and says that she came to get the Hand, kill Magda, or both. Barnabas asks about the man who he was trying to help. She says Magda cursed the man. Barnabas offers to pay her to help Quentin. She runs out with the Hand. 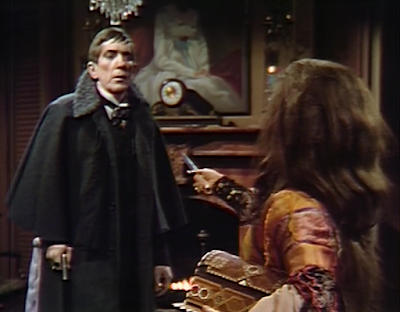 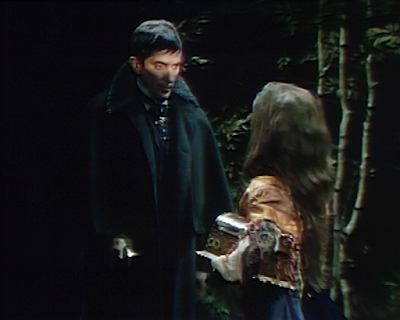 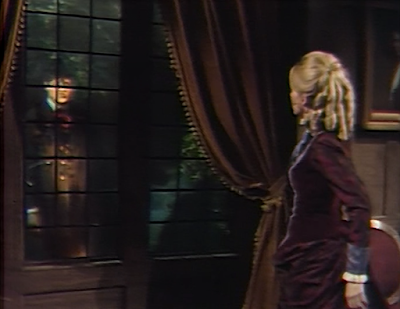 Barnaba tells Julianka that he will keep the hand until she needs it. She tells him to bring Quentin to her and she will do what she needs to do. He tells her that he will bring Quentin to her tomorrow night. He adds that someone else tried to use the Hand on him. She says that when used by the wrong person, the Hand is uncontrollable, and almost always evil. She says that once she has removed the curse, he must let her leave with the Hand. 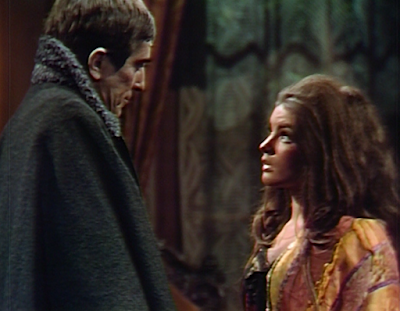 Angelique meets Aristede in the woods. He tells her that she is not a puppeteer. She asks him what he wants, and he says he wants to talk to her about her fiancé, Quentin. He asks if she intends to marry him. He tells her that Quentin only has 30 minutes to live. She asks where he is. He asks if she intends to choke him again, and she says she can do far worse. He tells her to give him the hand, and Quentin will live. He adds that if she does anything to him, she will lose Quentin. Aristede asks her for the hand again, and tells her she only has 28 minutes... 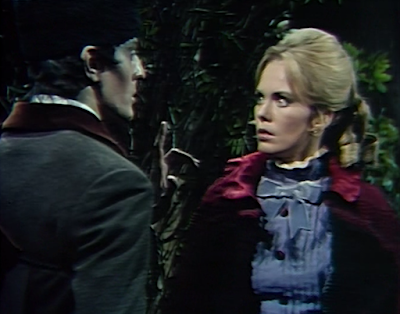 The pendulum swings closer to Quentin. 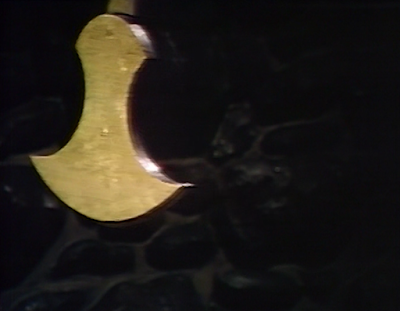 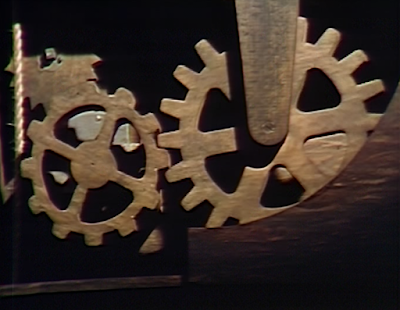 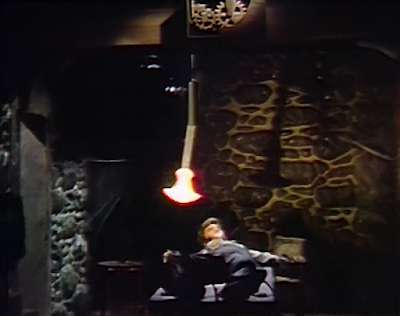 John: So are we to understand that the hand took back Quentin's mangled-face? I have to say, it's a little disappointing that the writers couldn't come up with an explanation for why the hand mangled-faces, or how the mangled-face characters were magically cleared of their affliction.

Christine: I can understand how the wrong person using it could mess up someone's face, but there's no real explanation for how they were cured. It may be that the effects of the Hand wear off over time, though it remains to be seen if this will always be the case.

John:  It's Poe-Day in Collinsport! I do wonder where one finds a rental with a pendulum on such short notice in the days before air bnb? 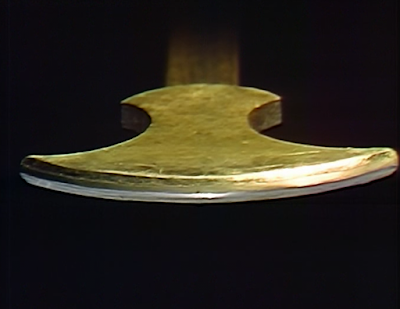 Christine: Perhaps they got it on loan from Roger Corman. What a great way to end the week!

John: I'm concerned that my new favorite gypsy Julianka isn't going to last much longer, having attempted to betray Barnabas. Not to mention that I doubt Quentin will be freed of the werewolf curse any time soon! 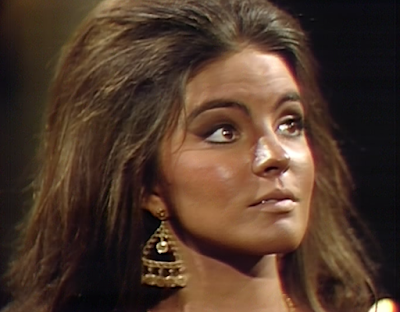 Christine: Now may be a good time to recall that back in Episode 767, Quentin told Jamison in a dream that he died because of three things: First was the discovery of a silver bullet at Collinwood. Then there was the murder of someone who could have helped him. Finally, the one person he loved turned against him. The bullet was discovered right off the bat, but the other two events have not yet occurred. Will Julianka be the murder victim or Magda? And who will be the one who turns against him? 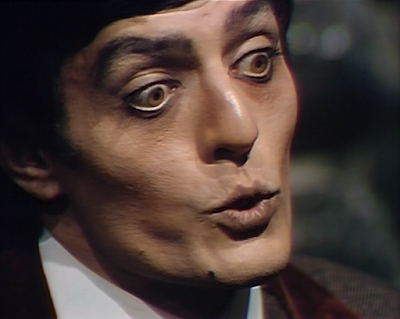 I heard about her condition, but I was hoping not to hear this.
But at least I heard it here.