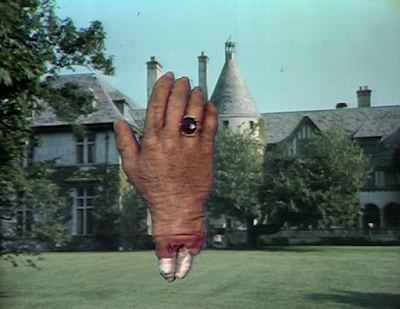 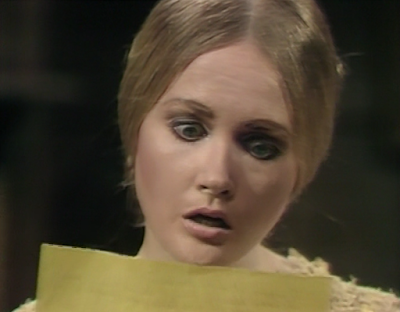 Trask grabs it from her and asks her where she found it. She says it was on the desk, and he said he watched it burn. She asks if he knows about it and he says she shouldn't give credence to this attack on her father. She denies believing it. He asks her who was responsible for her mother's death, and she says it was Tim. He berates her for acting like a streetwalker last night, and claims she's under Lucifer's power. She denies it. He pushes her to her knees and tells her to pray. 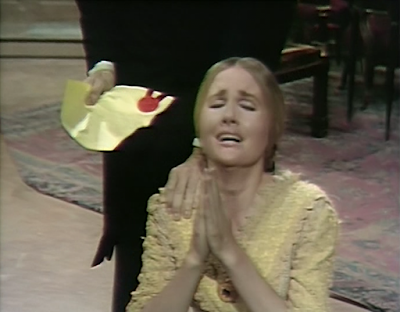 Magda checks on Jamison, who is locked up in the basement of the old house. He smiles, and then frowns. He asks if she's been assigned to guard his cell. She says there's a good reason why he's being held. He tells Magda that the truth can be destructive, and says that many are suffering in Collinwood. He tells her that her time will come. She says she doesn't believe him. He tells her that Trask felt the same, and now things are happening to him. He's trapped alone with his conscience. 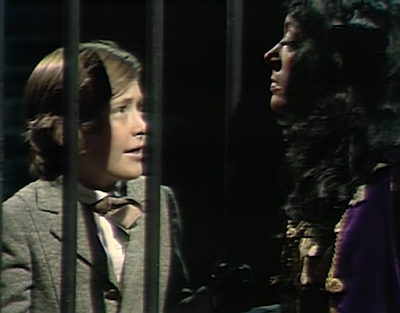 Trask takes the confession to the fire, but doesn't put it in. Instead, he rips it up. A wind howls outside. He throws the scraps away, and the door to the garden swings open. He closes it, and looks around the room. He calls to Minerva, and tells her to leave the house. He begs her to stop. The howling wind stops. He tells Minerva he is innocent, and the wind howls once more. It stops again, and Charles Tate asks him if he's alright. He asks Trask who Minerva is. Trask tells him that they're the only ones in the room. He asks Tate who he is, and he tells him he's been commissioned to do a portrait of Quentin. 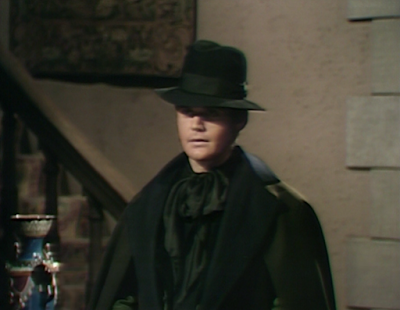 Trask recognizes his name, and suggests he must command a large fee. He tells him that Quentin can't afford to commission a portrait. Tate says his grandmother paid for it. Tate says he's taken a studio in the village. He points out that Quentin doesn't want him to do his portrait. Trask apologizes for Quentin's behavior. Tate asks if there might be photographs he could use. Trask opens the desk and a copy of the signed confession slips out. He grabs it, and continues looking for a photo of Quentin. He pulls it out and hands it to Tate. Trask asks him to consider doing a portrait of Charity once he's through with Quentin's. 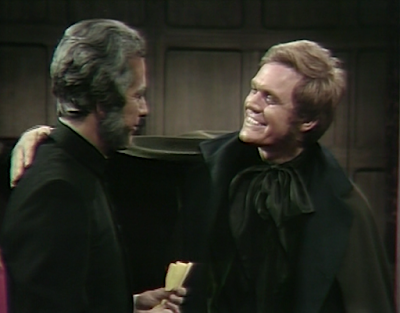 Quentin sits in his room, listening to his theme, when Charity enters. She invites him to join her for a walk on the beach. He says he doesn't like walks. She says they could sit and talk. He tells her she picked the wrong day. He tells her to leave, saying her father wouldn't approve of her being there. She tells him she heard Barnabas in his room last night. She says she's not going to tell her father, and he should remember that the next time she invites him somewhere. As she leaves, Magda enters. She says Jamison insists on seeing him. He asks if he's still possessed by Count Petofi, and she says yes. 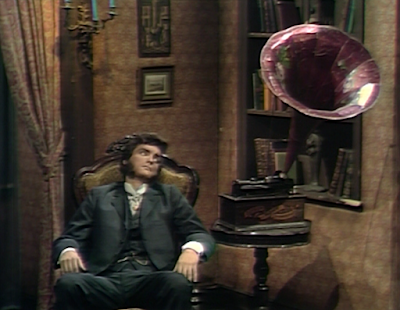 Jamison offers Quentin an opportunity. He says he knows about his problem. He offers to cure him in exchange for his freedom. Quentin says he offered to help him before, and it didn't help. Jamison gives him his word. Magda comes in and tells Quentin he's a fool if he listens to Petofi. She reminds him that Petofi can't cure him without the Hand, and he doesn't have it. Jamison tells Magda that he warned her. 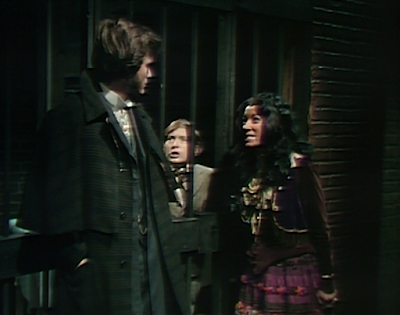 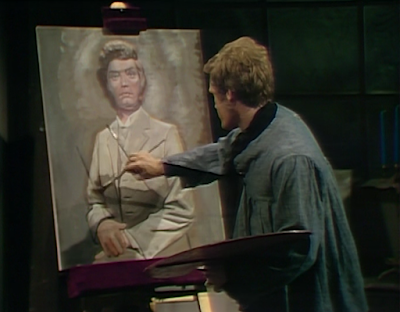 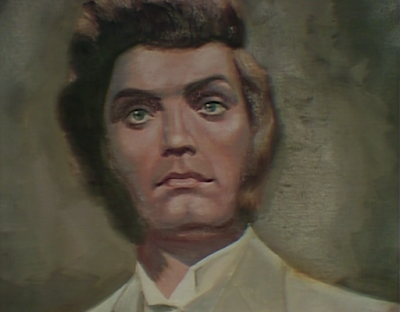 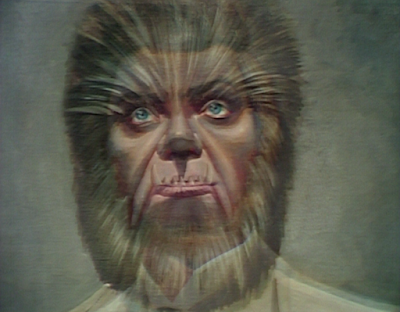 John: I thought for a second Trask was possessed by Roger Davis when he started grabbing his head. 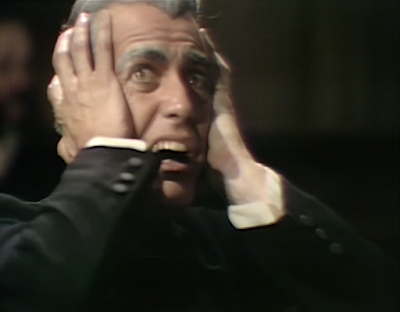 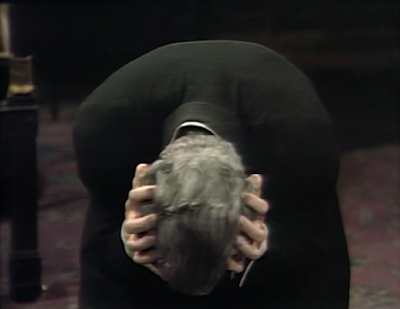 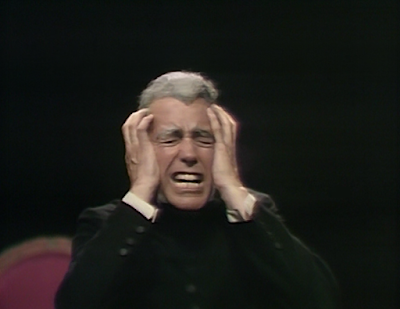 Christine: I don't think we've seen this caliber of acting since dear Dr. Lang was on scene. Head grabbing may be part of Petofi's curse. Trask is not the only one who's been afflicted. 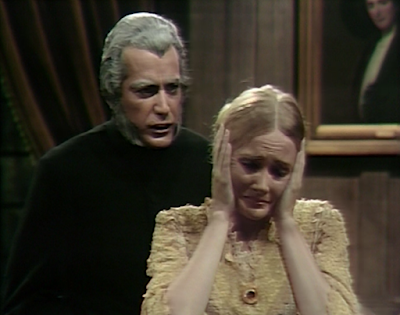 John: Do you think Tate rented what would become the Evans' Cottage in the future? It's a veritable painter's paradise. I wonder if any of Tate's paintings are lying alongside Sam Evans' work in 1967...

Christine: It certainly looks like the Evans' cottage. Those large windows surely make great lighting for painters, which must be why the place is rented out to artists as a studio. Tate said he did portraits, so I wouldn't expect any of the landscapes at Sam's to be his. I am hoping the portrait of The Mustache Man will show up at Tate's.

John: I don't know if my Dorian Gray prediction will come true, but the fact that Quentin's portrait can change into a werewolf portrait is a pretty cool feature.

Christine: That cool werewolf portrait has earned Charles Delaware Tate his own space in the Dark Shadows Gallery, though I do wonder why he's painted Quentin with a lazy eye and blonde hair on one side of his face. Perhaps he's not done yet.