In the Collinsport Gaol, Edward watches the werewolf change into a man with a mangled face. He doesn't recognize him as Quentin, and demands that the man tell him who he is. Mangled-face Quentin is unable to speak. 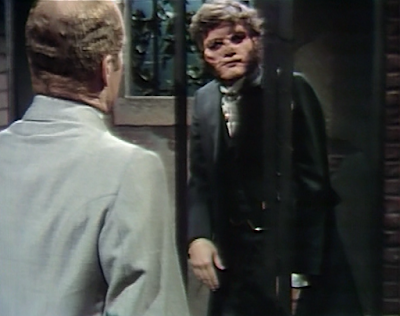 Magda arrives at the Gaol, and says she doesn't understand. Edward says that she knows who the creature is, and she says she is not. He asks why she's there if she doesn't know who the man is. Edward says that if the man could speak, he's sure he could tell him something about her. Edward says it's just a question of time before he finds and destroys Barnabas. He suggests that she should consider helping him. He tells her that he'll be at Collinwood, and starts to leave. When she stays, he says he assumes her curiosity is not yet satisfied. He tells her to pass on to the creature that his days are numbered. 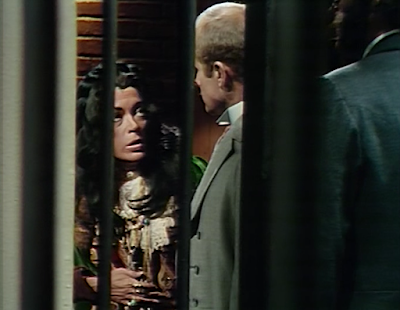 She asks Quentin if he understands what happened. He says that nine gypsies took him to the Forest of Oshden. She says he's different because of the hand, and his secret is still safe because Edward didn't recognize him. Quentin speaks of nine gypsies, and Magda realizes that Quentin doesn't understand what's going on. She goes to find Barnabas. 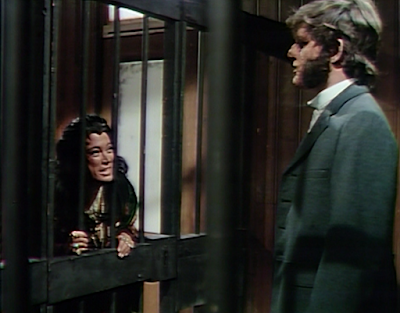 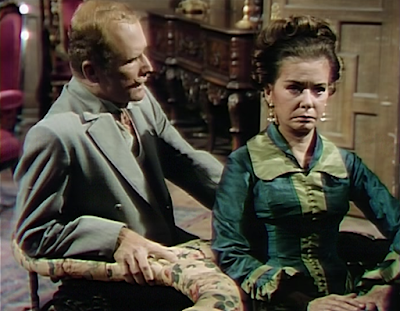 He leaves to his study. Judith wonders why she dreamed of Minerva Trask, and why she kept warning her of danger and the Queen of Spades. She turns away from a desk, and when she looks back, her playing cards are laid out. She screams and Edward comes running. She flips the top card, revealing a Queen of Spades. She says she's calling, and wants her to go to her. As she leaves, Edward asks her where she's going. She ignores him and walks out the front door. He calls after her. 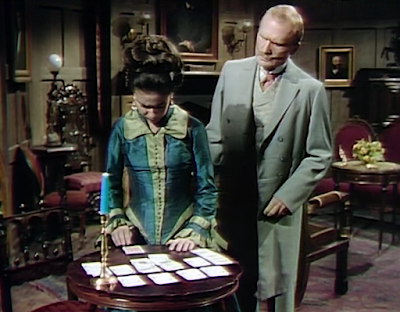 Judith stands at Minerva's grave, and asks why she called her. Edward appears and asks her what she's doing. Judith says that Minerva is here now. Edward says her dream a manifestation of her guilt for marrying Trask so soon after his wife died. He tells her to return to Collinwood with him, and she tells him to leave her. He tries to get her to come with him, and she tells him to call her Mrs. Trask. He gives up, leaving her. She says she now knows what must be done. 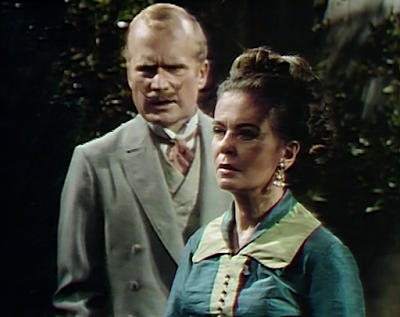 Edward returns to Collinwood and finds Magda looking for Beth. He walks past her and enters the drawing room. He calls Evan, and asks him to come as quickly as he can. Evan says he can't break free. Edward tells him that if he doesn't come, he will find another lawyer in the morning. 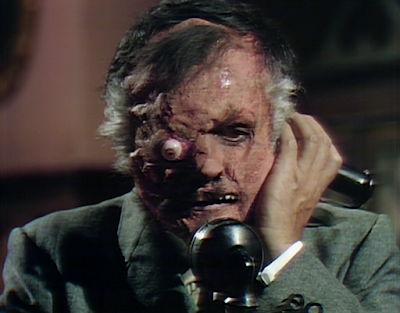 Evan looks at his mangled face in the mirror.

Edward leaves the drawing room and asks why Magda is looking for Beth. She makes up an excuse, and he asks if she's considered doing what he asked. Judith enters and asks who Magda is, and what she's doing there. Magda asks if she's joking, and Judith says she runs a very proper school. She tells Edward to send her away. Magda asks what happened to her. Judith says to get her daughter, and when Edward calls her Judith again, she says her name is Minerva, but they can call her Mrs. Trask. 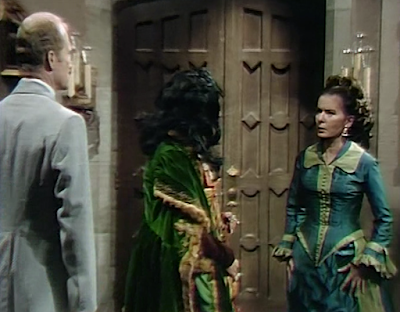 Evan arrives at Collinwood, and Magda is shocked to see his face is no longer mangled. She leaves him with Edward. He describes the dream Judith had to Evan, and says that now she is convinced she is Mrs. Trask.  Edward says that if Judith is out of her mind, than Evan is responsible to ensure that they are protected from Trask taking over control of the house. He goes to take him in to see Judith, and Evan asks to see her alone. Edward says he'll be in his study when he's finished. 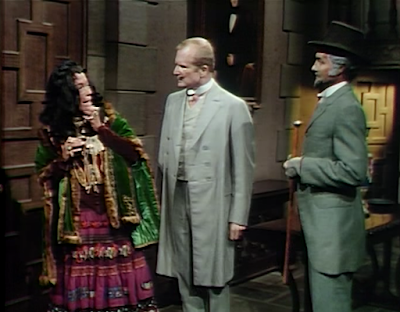 After Edward is gone, Magda comes out and asks how his face was restored. He says that he'll never tell her. She says she needs to know for Quentin, describing how he's in jail with a mangled face. She says they must help him before he is recognized. Evan says he has not intention to have any further involvement with Quentin, and he has no desire to help her. 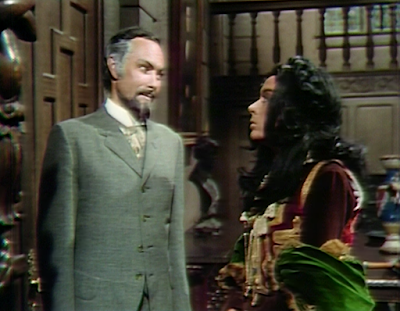 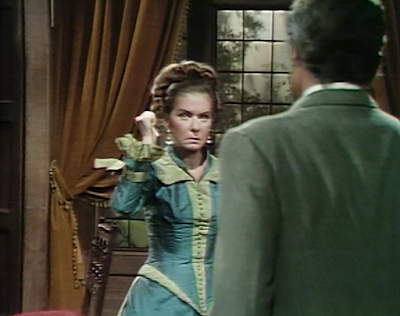 John: How did I not see this coming! The face mangling powers of the Hand have struck again! While not quite as nice as Evan's droopy eyeball, mangled-face Quentin is still pretty cool. 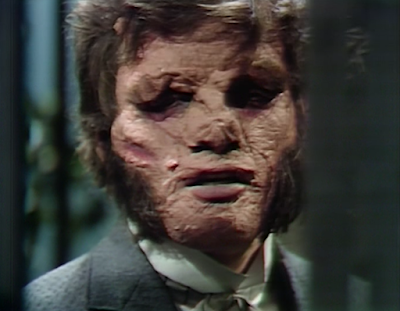 Christine: Quentin's disfigurement seems to be in the style of Josette's cliff battered face. Really, though, he's not so disfigured that his brother should be unable to recognize his suit and telltale mutton chops.

John: Ah, another Collinwood matriarch thinking she's someone else. Interesting to see how things continue to reverberate through time.

Christine: Judith doesn't just think she's Minerva, but is possessed by her, which is confirmed by her knowledge of the part Evan played in bringing about her death, though I get what you're saying, since Liz also had the experience of being possessed by Naomi, and knew of Barnabas being a vampire. 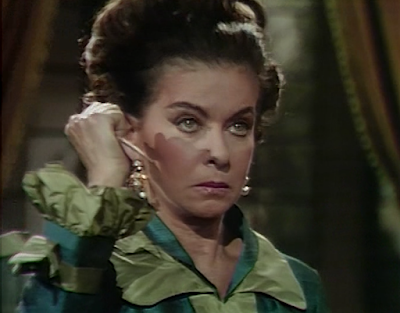 John: In a surprising double-whammy, Evan arrives at Collinwood, eyeballs in place in his skull, face sans-mangling. If we hadn't seen a still-mangled Evan when Edward called him, I would have assumed that the magic hand transferred the face-mangling from Evan to Quentin. I somehow doubt that Evan suddenly figured things out on his own, which means he likely had help. And there's only one other person in and around Collinwood who might have such restorative powers—Angelique. I guess we'll find out soon enough.

Christine: Hmm. That's an interesting theory. I agree that he probably didn't figure out how to cure himself on his own, but Angelique wouldn't help Evan unless it somehow served to either hurt Barnabas or make him love her, and I don't see how helping him would do either of those things.