Jamison takes out a book and writes notes. Edward - Servant. Beth - in bondage to a vampire. Trask. Magda. Evan. Charity - slut. He smiles. Barnabas grabs Jamison and drags him through a secret panel. 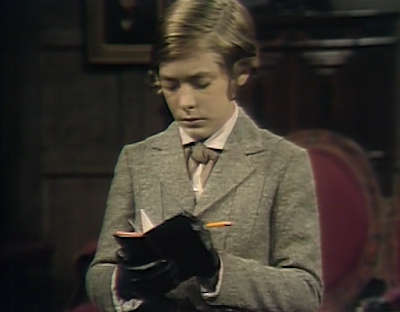 Barnabas locks Jamison in a cell in the basement of the old house. Jamison pleads with him to let him go. Barnabas says he will as soon as Petofi is gone. Jamison says the boy will grow old and die in his cell. 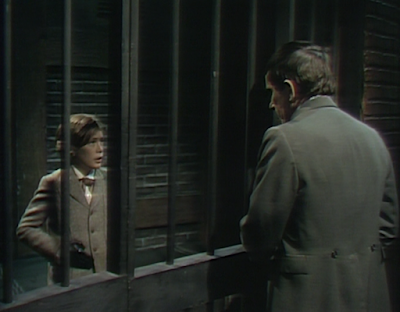 Possessed Charity dances around Collinwood when Trask enters. He's shocked. He forbids her from singing. He calls out the shocking condition of her face. She says she might go on stage and change her name to Pansy Faye. Trasks asks if she knows who she is, and she says she's Charity Trask, with a crow like him for a dad. He slaps her, and tells her to honor her mother and father. She says she was just going to her mother's grave, and her father asks if she's going dressed like this. She comes to and says that Edward and Jamison have lost their reason. He tells her to get Jamison, and reminds her that she is not a Collins, and therefore not at risk of this madness. She goes upstairs to get Jamison. 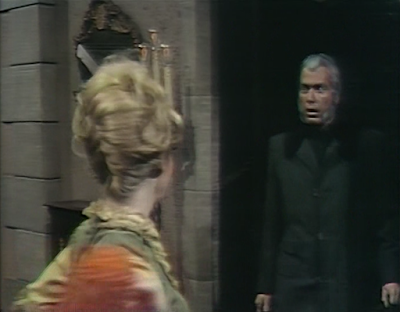 Evan spells words with Scrabble tiles when he thinks he hears someone. The doors swing open, and he asks to be left in peace. Barnabas appears. He says he's there for the hand. Evan tells him to find Tim. Barnabas asks where he is, and Evan says he doesn't know where he is, or about his plans. Evan says the hand didn't bring him power or wealth—it brought him a face he couldn't even look at in the mirror. Barnabas says that he can't look in the mirror, and tells Evan that he had better not lie to him. 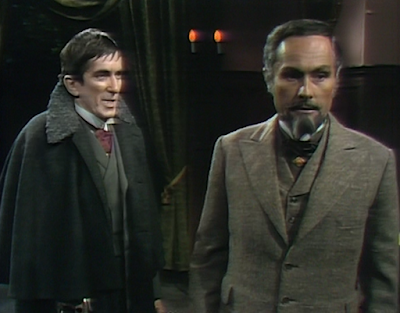 Trask is reading when Charity arrives to tell him that Jamison is nowhere in the house.

Evan assures Barnabas that he knows nothing, and none of his books can protect him from Barnabas' gaze. There's a knock at the door. It's Trask. Barnabas disappears, and Evan lets Trask in. Evan asks about Judith, and Trask says she'll be at the sanitarium for a while. He says her madness seems to have infected Edward and Jamison. Edward thinks he is a servant, and Jamison has run away, similarly touched by madness. Evan asks where he is, and Trask says he's in no hurry to find him. He says that once Quentin is dealt with, he will be master of Collinwood, without having to wait for Judith to expire. He tells Evan to draw up papers declaring father and son as mentally incompetent. Evan says he doesn't want to have anything to do with Collinwood. Trask mentions that Jamison thinks he's Count Petofi. 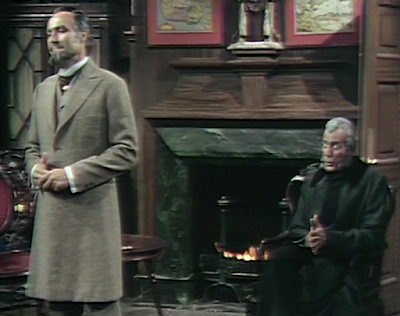 Evan says it's worse than he thought, and he'll have nothing to do with the matter. Trask reminds him that he's dealing with the master of Collinwood. Evan says that Trask is dealing with Count Petofi, and he doesn't know what that means. He warns Trask of Petofi's great strength. Trask says he has the powers of heaven on his side. Evan questions whether the powers of heaven will support Trask's behavior. 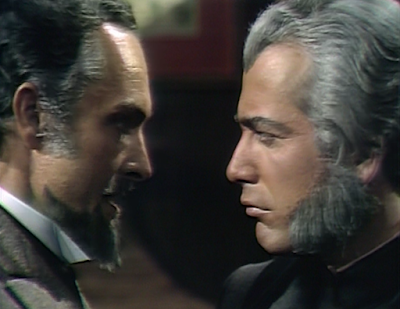 Jamison reviews the names in his book. He calls to Evan.

Evan seems to wake from sleep, asking who's calling him. Jamison appears before him, and says he's afraid to go home. He spells out TRASK with Evan's Scrabble tiles. Jamison says Trask is telling lies about him. He asks Evan to take him home. When he agrees, Jamison kisses him on the cheek. Evan says he'll take him to Collinwood, and then Jamison disappears. Evan hears Jamison's voice saying he will know what he wants him to do for him. 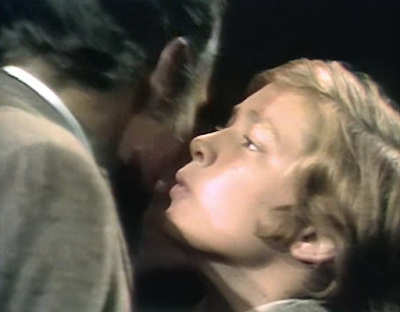 Jamison, in his cell, says Evan will know what to do. 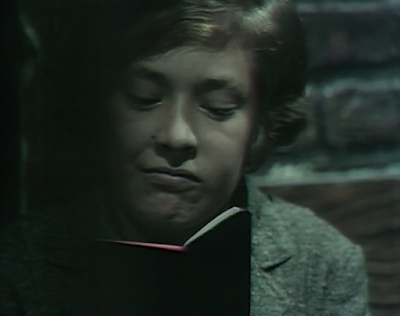 Evan wakes up. He begins writing a letter. 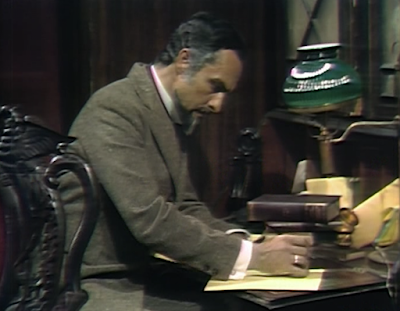 Trask talks to Charity about Edward, wishing he could use him as a domestic on staff at Collinwood. Charity shows him a recorder she found in the study. She says she loves music and singing. She starts, and Trask demands that she stop at once. She then begins speaking in a Cockney accent, talking about what Carl liked. Trask tries to push her to her knees to pray. She snaps out of her trance and does as her father demands. He kneels beside her and prays. 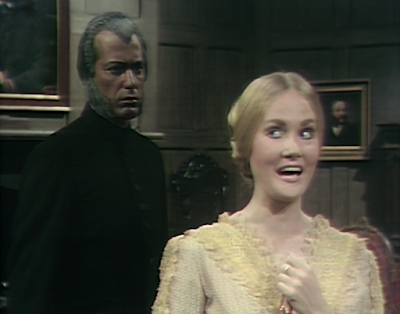 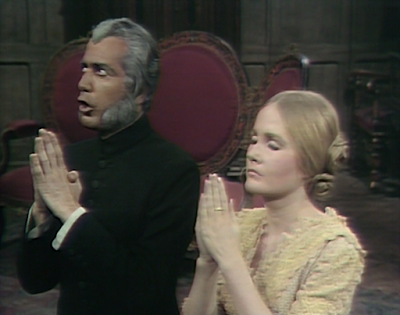 Evan comes in and asks if he's interrupting. He says he'd like to get down to business. Trask sends Charity upstairs. Evan gives Trask a letter to sign. Without reading it, he signs it. He then stops and says he's insane to have put what he did on paper. Evan says he signed it too—they both murdered Minerva. 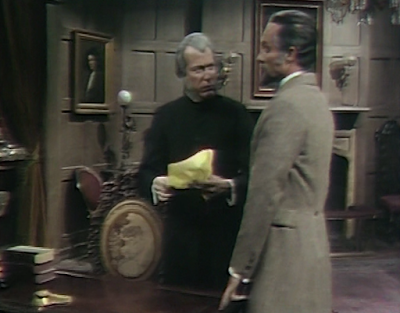 Trask says he's going to destroy it, and places it into the fireplace. Evan says he can't kill murder. Trask tells him not to tell anyone about it, or he'll hang for worse than murder. He leads him out, and the signed document reappears on the desk. 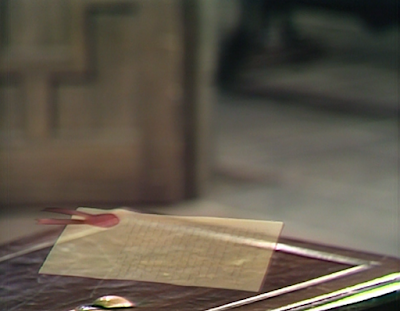 John: I wonder if Trask can slap the possession out of the rest of the folks in Collinwood. It would be fun to see him try! 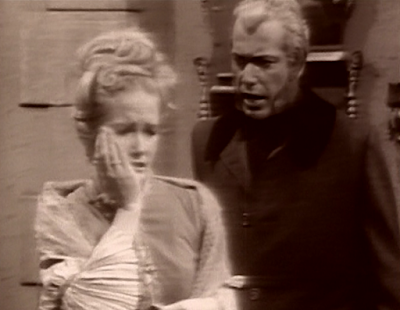 Christine: Was Trask so mad he sucked all of the color out of the world? It is interesting how Charity drifts in and out of her Pansy Faye possession.

John: I wonder if Petofi knows Evan and Trask killed Minerva, or if he's just triggering Evan, who decides to admit to their crime. Wouldn't it be cool to see them brought to trial for murder and then executed! I won't hold my breath. 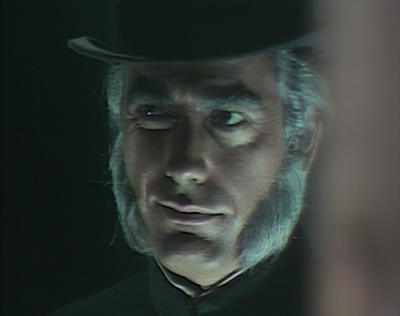 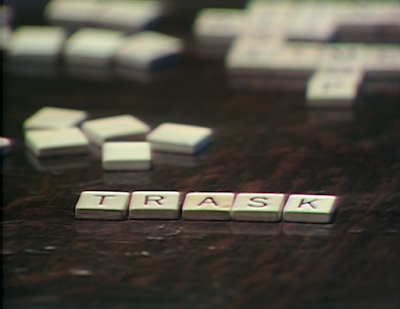 Christine: He also seemed to know that Barnabas is a vampire with control over Beth, so he may be somewhat omniscient. I can't wait for Petofi to get to Trask in his little black kiss-curse book.

John: Getting fancy with the chroma key today - not just using it for Barnabas to appear and disappear, but also to make the signed confession do the same!

Christine: I was more impressed by the way Trask couldn't get hold of the paper that didn't require any special effects. It's been awhile since we've seen the psychedelic dream lights, but it's another element that makes me associate Angelique's famous dream curse with Petofi's kissing curse. Both had a way of using indirect means to make a lot of people suffer in order to achieve an outcome in a way that lacks expedience. 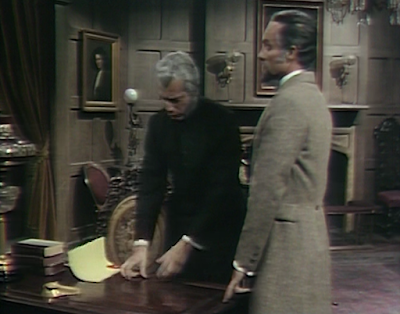 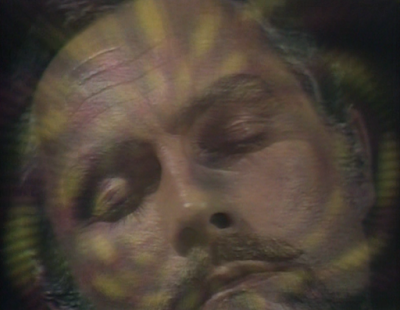 Episode 805: Jamison, possessed by Petofi, kisses Evan, who drafts a murder confession for Trask to sign.