Angelique watches Quentin transform to a werewolf, as Victor watches through the window. He gets up, no severed hand on his chest. He walks out the front door. Victor says he must get the Hand, and enters the house. He looks around for it, but the Hand and the box are missing. 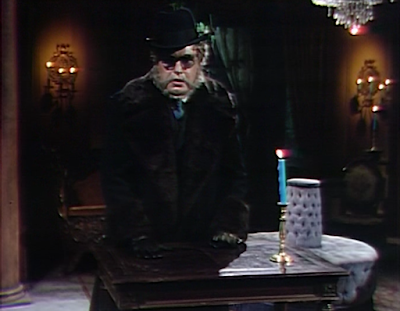 Angelique looks out the window of Collinwood, listening to a wolf howl in the distance. Victor returns to Collinwood and asks her if Edward is there. She says he might be in his study. He flatters her, and tells her that he will be staying at Collinwood for a week or two before leaving to explore the rest of the country. He asks if she's related to the family. She says that she was engaged to a family member, but it didn't work out. She says she is a guest like he is. 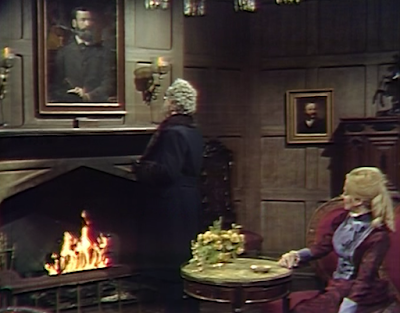 He asks her about her ancestors from Martinique, and asks if she has ever been there. She says that she never has. He asks her about the people there and their use of black and white magic. She says that interests her, but she has no direct knowledge of it. He tells her that he needs to return to the Collinsport Inn to get a gift for Edward that he left there. Angelique hears a strange warbling sound. She looks at the portrait of Barnabas, smiles, and leaves Collinwood. 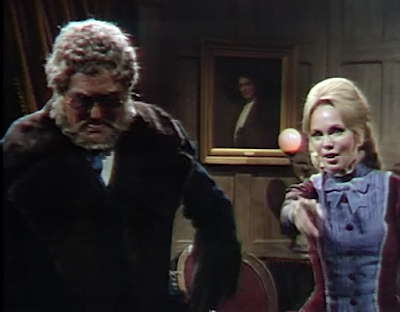 Aristede is in The Blue Whale when Victor arrives. Aristede asks if he got the Hand. Victor says he can almost forgive Aristede s blunder, considering Angelique's beauty. Aristede smiles, and Victor reiterates, "almost." He explains that Angelique may be a formidable enemy, or a most valuable friend. Aristede says someone who attempts to kill him isn't a friend, and if he sees her again, he'll kill her. Victor says that he doubts that. He says he's convinced she has supernatural powers. Aristede asks Victor to let him try to get the Hand from her. Victor says it will take planning, and they must stay longer than planned. He adds that their forged letter convinced Edward Collins. Aristede must stay in the village, as no one must know of their relationship. 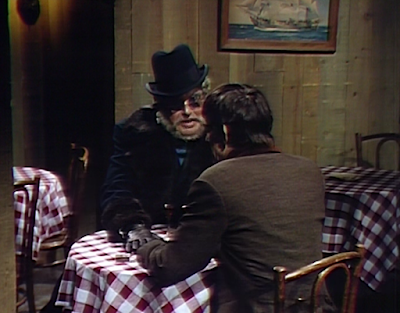 A woman enters and Victor is frightened. He says she's a gypsy. He leaves, and tells Aristede to meet him outside of Collinwood. Aristede introduces himself to the gypsy as she drinks at the bar. He tells her that she's beautiful. She asks if he knows Magda, and if so where she can find her. He says he can. He asks her name. She says she's Julianka. He offers to take her to Magda after they've had a drink together. 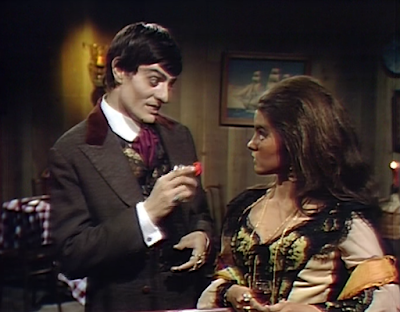 Angelique comes to see Barnabas. She asks if he's willing to admit that she was right, and his mission in this century is impossible. He asks if she has agreed to help Quentin, and she says that she has. She tells Barnabas that she got the Hand, and tried to use it. She says that Quentin underwent another transformation, and the Hand didn't work. He calls her a fool, and she says she'll try again. 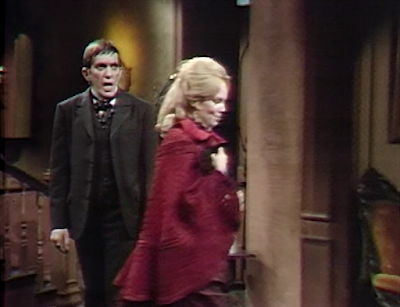 He asks why she's trying to help and she says that Quentin has agreed to marry her. He tells her not to meddle in history, as it will impact lives in the future. She asks Barnabas what he's been doing since he's traveled back in time. He accuses her of doing it out of spite. She says bored with him, and she's sick of waiting. She storms out. 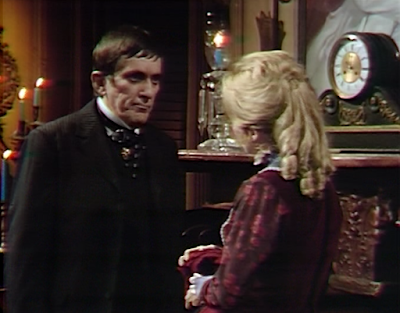 Aristede and Julianka are walking through the woods. He points out the old house, and tells her that's where Magda is living. She thanks him, and he says that she could repay him by joining him at The Blue Whale after she's done. He moves in on her and she pulls a knife. She tells him that he may see her again. 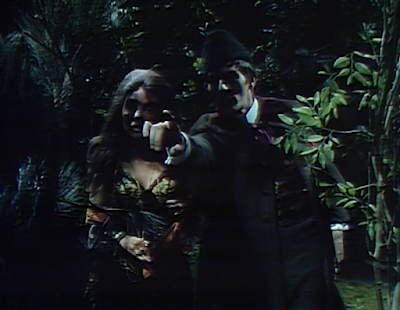 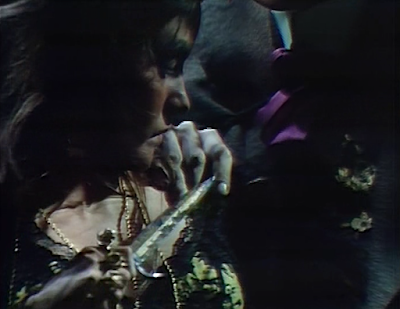 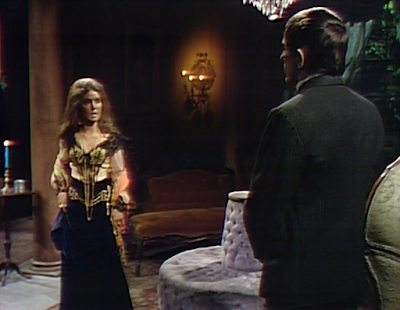 Barnabas asks how she proposes to end the curse. She says she cannot tell. She says her great grandmother put the curse on Count Petofi. She says that she passed the secret of the curse down to her grandmother, who passed it on to her mother, who passed it on to her. She asks if Barnabas wants to know her price for providing the cure. She says that Magda stole something from King Johnny Romano's tribe. Barnabas says that neither he nor Magda have the Hand, though he knows who does. She tells him that Quentin's curse will go on if she doesn't have the Hand in 24 hours. He tells her to wait as he leaves, she reminds him that there will be no cure without the Hand. 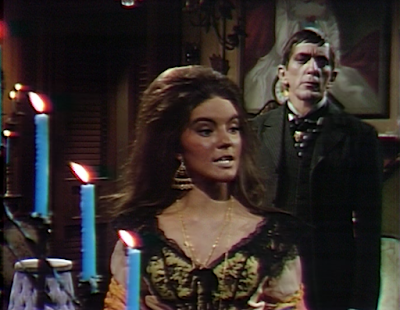 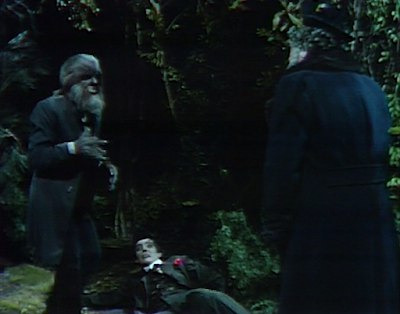 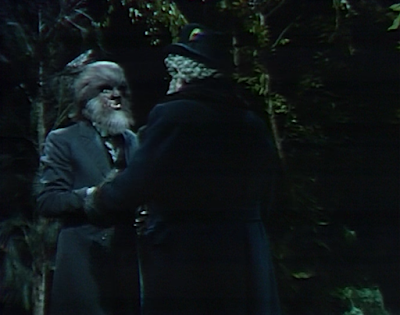 John: Do you think the Hand of Petofi had the day off today? Or did someone misplace the prop?

Christine: Perhaps someone took it home to play pranks and didn't realize it needed to be back on set for the filming of today's episode. So, is the werewolf calm around Victor because he also has a furry face?

John: A cute little gypsy comes to town, and already the new kid is putting moves on her. I only wish that when she pulled the knife, she had a story like the one he told Quentin about the dancing girl... 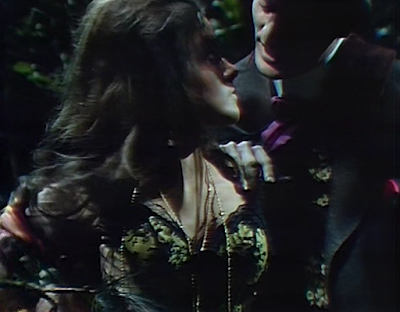 Christine: When Angelique told Barnabas she was getting a husband for helping Quentin, I expected him to say he had no intention of marrying her, not yet knowing that she has finally decided to move on from her obsession over him. I wonder if he may be a tad bit jealous. 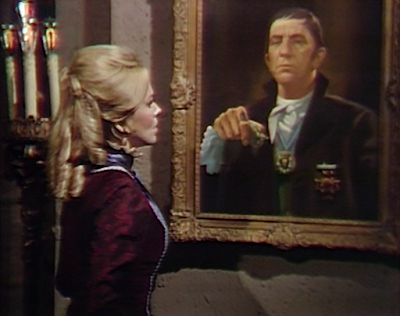 John: Do you think Barnabas is aware that Quentin's got a bad case of mangled-face? The last time he saw him was before Magda tried to de-curse him with the hand, right?

Christine: Barnabas last appeared in Episode 787 when Quentin was in jail but had not yet experienced the delightfully disfiguring effects of the Hand, though I think we can assume Magda filled him in. Our long lost pal, Bartender Bob Rooney, who last served drinks at the Blue Whale in Episode 358, made a mute appearance in today's episode, gesturing to the drink he'd just served Aristede after he ordered another, prompting Aristede to explain it was for someone else. 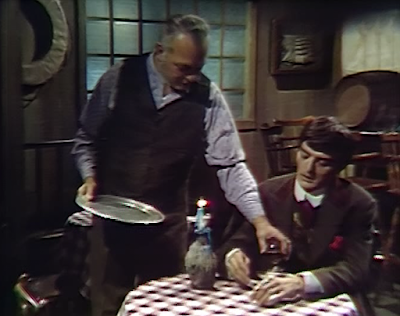 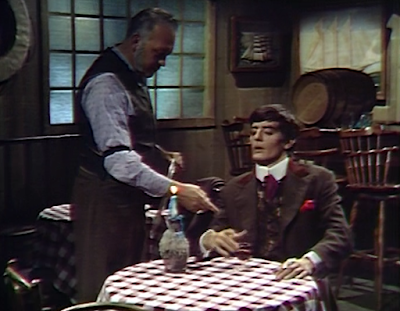