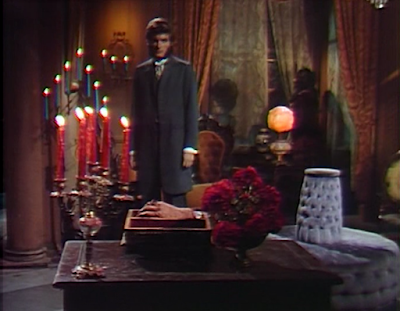 Quentin says if the hand could do what it did to Evan, he doesn't want to have anything to do with it. He begins convulsing as the transformation takes effect. Magda says it isn't too late to use the hand, and Quentin says it won't help. Magda says it can't be any worse, and asks if he wants her to try. He tells her to try. She recites an incantation to remove the curse, and places the hand on Quentin's heart. He tells her it isn't helping and he tells her to take it away. She says she can't control it, as the hand grows to be larger than Quentin and appears to pinch him. 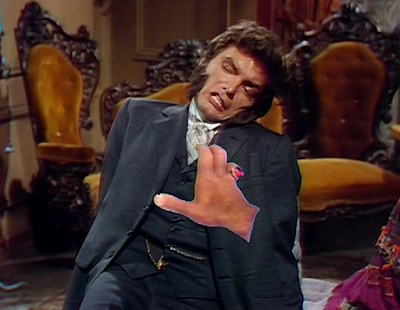 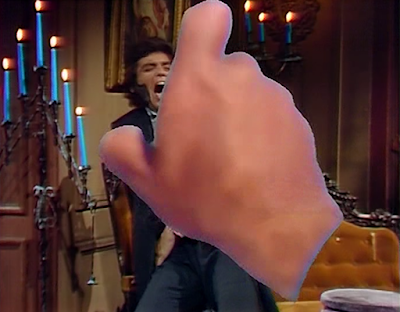 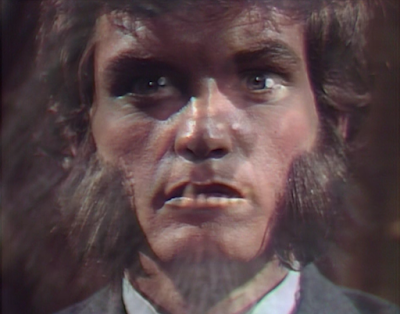 Trask brings Charity to Collinwood, and tells her that it's her new home. She says she will not question her father's judgment, though she is concerned about the school. He says his marriage to Judith contains certain burdens, such as managing the great estate. She realizes that means he can no longer run the school. He adds that her mother wanted her to be a Collins. He says there is still one eligible bachelor in the family, Quentin. He says that under her influence, Quentin might just change his ways. 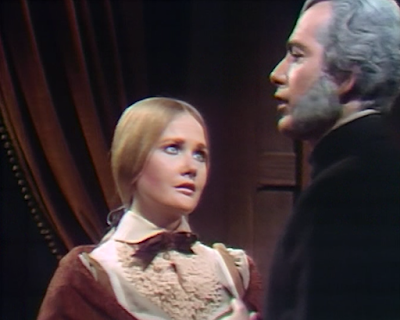 There's a knock at the door and Magda enters to see Beth. Trask says she will see no one without his permission. He says that as master of Collinwood, one of his concerns includes her. Charity steps out to say a prayer at her mother's grave as Trask leads Magda into the drawing room. He gives her 24 hours to get off the estate, or she will be forcibly removed. She tells him that he shouldn't threaten people from a position of weakness. He says he can prove she worked with Barnabas, and she reminds him that she sold Tim the deadly nightshade that killed his wife. 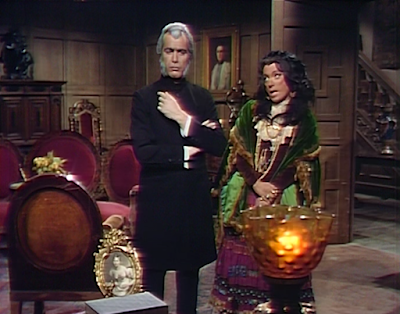 She says the sheriff knows he made an alibi for Tim. She asks if Trask understands her, and he says he does. She tells him that she and Sandor will stay, and that she will speak to Beth now. He tells her to speak to whoever she likes, and then get out of the house. 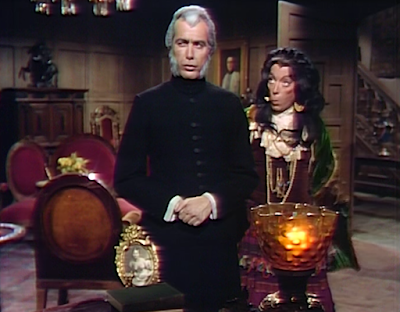 Charity is on her way to her mother's grave when she hears a rustling and growling. The werewolf approaches and she screams. He chases her through the woods. 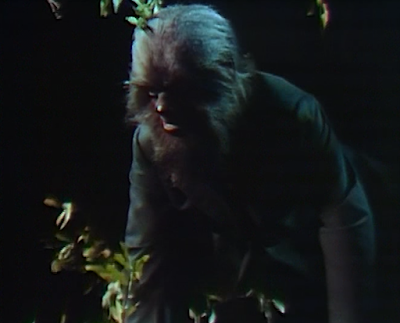 Magda tells Trask Beth wasn't in her room. They hear Charity screaming, and she runs into the house. She tells them there's a beast in the woods. Trask says it must be the creature who attacked Judith. Magda takes her up to her room as Trask goes to call the sheriff. 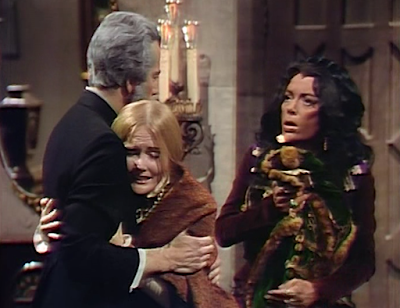 Charity asks Magda about Quentin. She says he doesn't seem to spend a lot of time in the house. She asks what happened to his wife, and Magda says that she's dead. She pulls out her Tarot cards and asks Charity if she'd like her to read her future. Charity agrees, and Magda lays out the cards. The first card is the sign of Force to represent Charity, a good card. She then reveals the Moon, saying it's a bad card representing a secret revealed. Next up is the Lovers, a card of marriage, though she says it's inverted, which could mean separation or infidelity. Next are the Tower of Destruction and the Hanged Man, both inverted. Charity asks what it all means, and Magda tells her there will be a man in her life who is evil. She warns that Charity will be attracted to him. 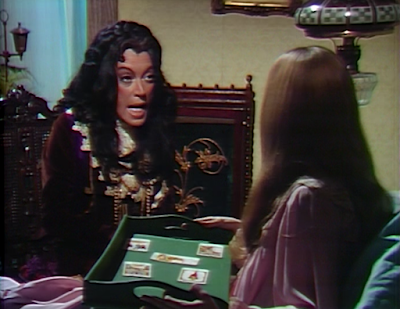 Trask is with a deputy, setting a trap for the werewolf. They hear a howling in the distance.

Magda comes downstairs as Trask returns. He suggests that she be careful making her way to the old house, as the sheriff has set several bear traps. She seems concerned, and he asks if she knows of the beast, as she knew of the vampire. She tells him his daughter needs him more than she does, and leaves. 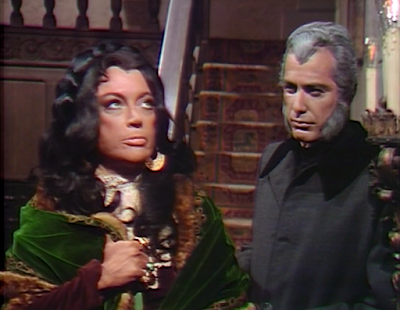 Charity sleeps, and dreams. Quentin's music plays.He sits in a chair next to the Victrola. She asks if it's him, and he says he's been waiting for her. She approaches and he stands up. She tells him that she missed him, and she doesn't want him to go away again. He tells her their destinies are entwined by a strange wheel of fortune. He says many things frighten him, the moon most of all. She asks why, and he tells her it's a secret that no one must know. She asks what the music means to him, and he says it frees his soul and allows him to dream. 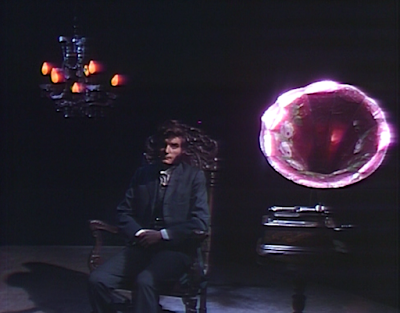 She hears the music with his lyrical accompaniment. As the song ends, he kisses her. He tells her to go upstairs and wait for him. 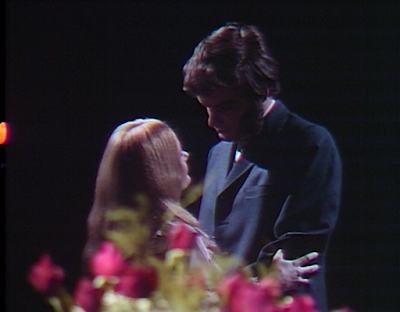 He sits back in his chair, and as she goes, she hears a growling. She asks him what it is, and he tells her that he only hears his music. She says it's the animal that attacked her in the woods, and the werewolf appears behind Quentin's chair. She begs for Quentin to help her, and screams as the werewolf approaches. Quentin tells her the wheel of fortune spins, and she mustn't be afraid. She wakes from her dream. 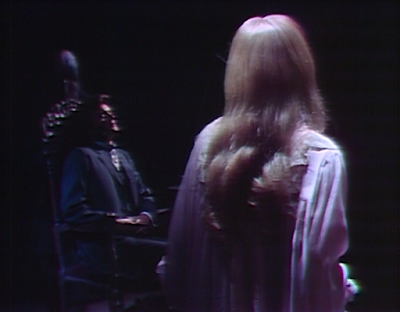 The werewolf attacks the deputy placing traps, and steps right into one. He howls in agony. 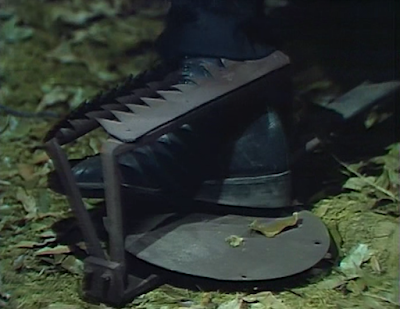 John: Okay, I get that they couldn't find a stuntman as tall as David Selby, but they could have done a better job matching the wardrobe between Quentin and the werewolf. It's silly when the transformation includes the color of his clothes... 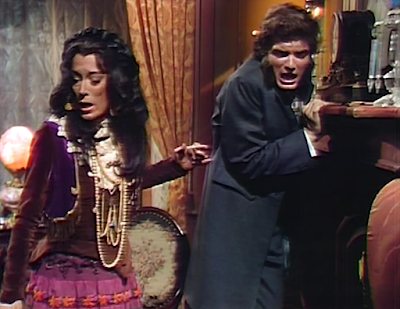 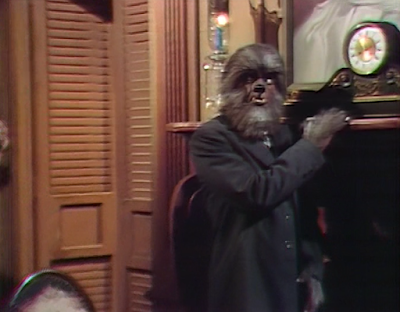 Christine: I had to go back and look since I honestly didn't notice while watching the episode, but in looking at the screenshots, it's easy to see the differences in height and clothing.

John: Trask spent a few moments staring at Barnabas' portrait, which got me thinking. Wouldn't you remove the portrait of a vampire family member from the foyer of your house?

Christine: Only if you didn't like vampires or your vampire cousin wasn't a central character. I was surprised Trask let Charity go visit her mom's grave at night considering that he knew she was recently a vampire victim. How did he know Barnabas wouldn't give her another little nip on the neck at the graveyard? Little did he know she'd run afoul of one of Collinsport's other supernatural creatures. Trask stabbing the Bible may have been a clue that he was also responsible for the knife Liz found in the Bible in Episode 785, and possibly the childish drawing as well. I love how Magda basically called him out for killing his wife. 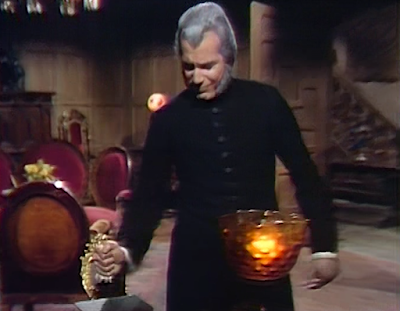 John: We finally get the version of Quentin's theme with 'lyrics'! I never expected to hear that on the show. It's worth noting that the recording of Quentin's Theme by The Charles Randolph Grean Sounde peaked at #13 on the Billboard charts on August 2nd, 1969.

Christine: Quentin's theme with David Selby's voiceover is Cobert's Cue 294, which can be found on Disc 6 of The Complete Dark Shadows Soundtrack Music Collection. It's interesting to see the other singles on the Billboard Chart that week to get some context. I am really surprised Magda's tarot reading not only didn't turn Charity off Quentin, but inspired a fantasy/dream. What a great Monday episode! Here are the lyrics to Quentin's theme so you can sing along with your Charles Randolph Grean Sounde record:

Shadows of the night,
falling silently,
echo of the past,
calling you to me.

In this world that we know now,
life is here,
then gone.
But somewhere in the afterglow,
love lives on and on.