Leticia brings the box with the head to the secret grave, and tells the body he can now be whole again. She lifts the cover from the box, and the head is staring at her. The headless body approaches the boxed head. Leticia stops the body and says he must wait, as it's not time. She goes back to the head, and asks the head what more is to be done. 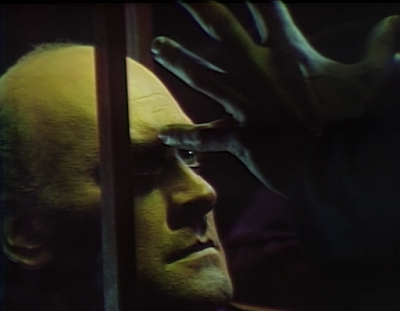 Barnabas ponders the missing head and the missing headless body. He wonders what kind of evil will be among them if they are brought together. Barnabas says they need to find out more about Judah Zachery. He says there has to be a reason why he was decapitated. He sends Julia to Bedford to find out. 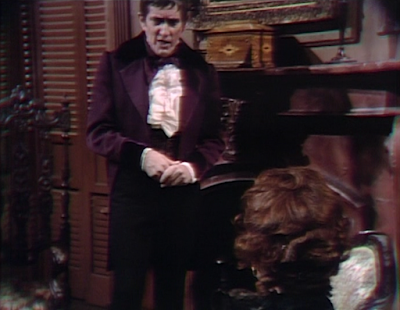 Leticia tells Zachery that she understands, and then covers the box again. The body gets up, and she sits it back down before leaving.

Angelique is in the drawing room when Daniel enters. She introduces herself as Valerie Collins, Barnabas' wife. Daniel reacts strangely, saying she reminds him of someone, but he can't remember who. He says her name is not Valerie. He says it's not possible. He says that she's Angelique, and he remembers her. She says he hasn't been feeling well. He says she's a witch, and Ben Stokes testified to her death, but they didn't believe it. He says if she's the same, is Barnabas, too? She says he has an excellent memory. 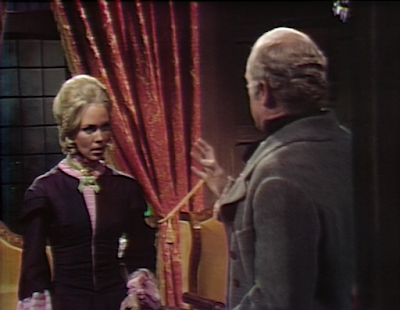 He asks how they both came back. She asks if he'd rather just forget. He calls for help, and she says that no one can help him. He pounds on the door. She says when she came back she thought this might occur. She says he will have to forget everything. She asks if there are things he would like to forget. He asks what she means. She calls upon darkness. 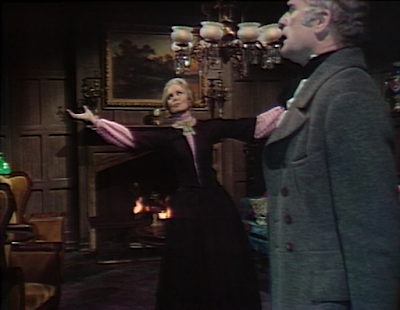 Daniel is cold. She tells him to look, saying someone he loved is here. She tells him to turn and look at her. He does, and he sees the ghost of his wife. Angelique says she knows his secret, and asks if he'd like to hear his wife scream the way he did the night he murdered her on Widow's Hill. The ghost approaches and reaches out for him. He begs Angelique to make her go away. She says he will forget Barnabas and Angelique, and if he starts to, his wife's ghost will return. She sends the ghost back to her watery grave. 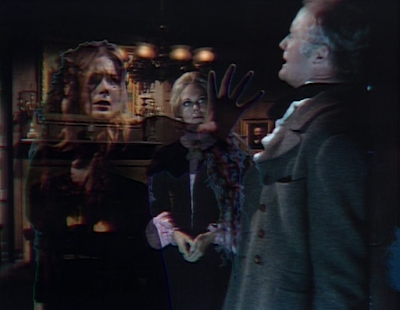 Leticia returns to Collinwood and hears Daniel crying in the drawing room. Angelique opens the door, and he's sitting in the chair, looking fine. He introduces Leticia to Valerie, Barnabas' wife. Daniel excuses himself, and Leticia asks him if Julia is there. He says she must be with Barnabas, and goes upstairs. 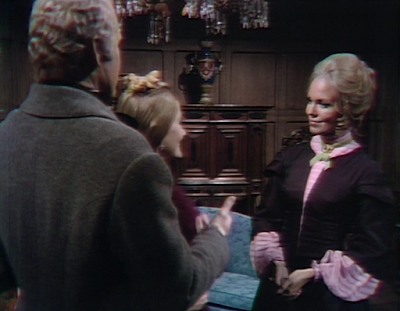 Julia tells Barnabas that she was in luck, as the newspaper in Bedford was printing that night, and she was able to find an article by a prosecutor who said Judah Zachery was the most evil man who ever lived — the Devil's son. He corrupted the entire town he lived in near Bedford. Zachery claimed immortality, and said he could not be killed as long as he possessed the Mask of Baal, which he wore during rituals. He said he got it from the Devil himself. Barnabas says Desmond mentioned finding a mask. She says that they couldn't find anyone to testify against him until the last day of his trial — a woman named Miranda testified against him, and explained that his head must be decapitated and the body hidden. She says the head was kept on display until it was stolen, perhaps by one of his followers. She says that over time, the judges and their families all died mysteriously. She says one of the judges was a Collins — Amadeus. Barnabas says that he remembers as a boy Amadeus and his family died. 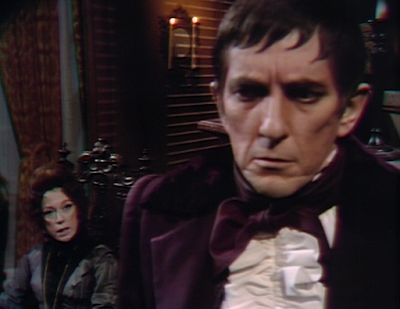 Angelique enters and says that at last she can meet her new sister-in-law. He calls her Angelique, and says she's using a different name to protect him. She says she doesn't want to make a bad impression on her new sister-in-law. He sends Julia away, and Angelique asks how long she has traveled with him. She dismisses Julia, saying they have all the time in the world to find out about one another, and Julia tells her that she knows all about her. 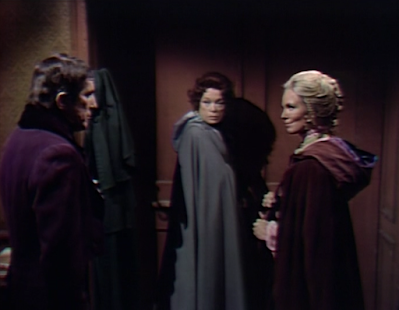 Angelique reminds Barnabas that she loves him, and he says it's another lie. She asks him to let her show him that she has changed. He says he gave her a thousand nights of agony, and she says she gave him immortality. 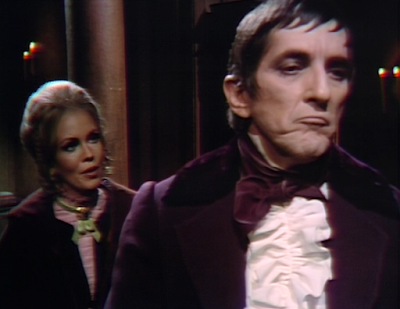 Barnabas tells Angelique they're in their usual stalemate. He tells her that Daniel will remember her, and she says he has been taken care of. She says she's always thinking of Barnabas, and asks if he can ever think of her. She says in time perhaps he won't consider her one of his enemies. 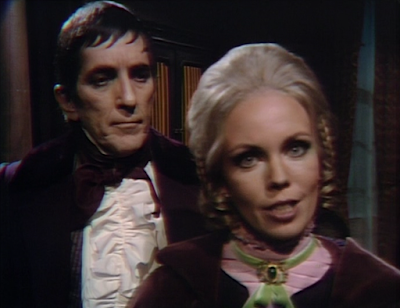 Leticia leads Julia to the body. It's lying on the ground. Julia says it's not moving. Leticia uncovers the boxed head, and Julia stares into Judah Zachery's eyes. She realizes that Leticia is under his power. She turns away, but can't help but return to stare into his eyes. 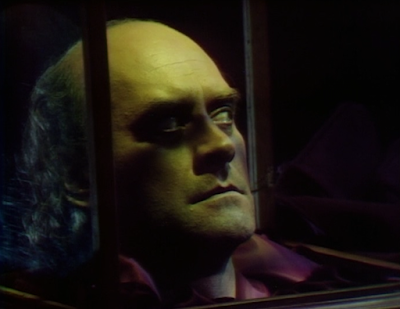 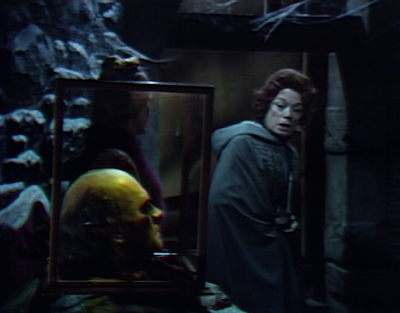 John: I know it's too much to ask to see the headless body attempt to screw his head back on, but that would have been a classic scene. Of course I'm kind of glad they're keeping them separate, because let's face it — a shorter character with his head attached is less interesting than a tall headless man and a head in a box... 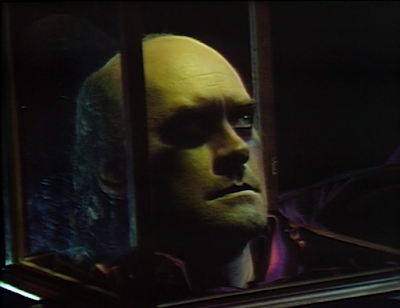 Christine: I agree that Judah Zachery is potentially more interesting in his separated form, though we'll see once he's put back together if that's true or not.
John: Harriet Collins almost had a Medusa-like look when her ghost appeared. So much for her looking like Julia (as Daniel's suggested when Julia first arrived in 1840). 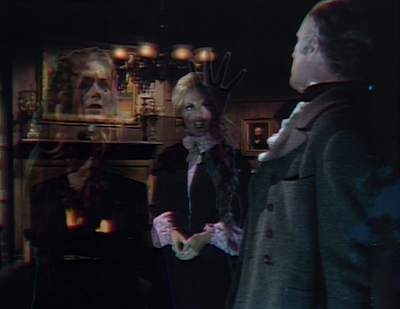 Christine: Daniel is quite mad, you know. He may assume any redhead is his former wife.

John: So now we know that Angelique in 1840 doesn't know who Julia is. That should make for more interesting interactions moving forward. If Barnabas and Julia are smart, they should be able to use this against her... but then B&J haven't proven to be the sharpest tools in the shed since their trip to 1995... And it doesn't help if Julia is going to be under the spell of the Devil's son himself.

Christine: It is nice to have Mrs. Barnabas Collins back to cause trouble at the estate. It should make for some entertaining interactions with the rest of the Collins clan. Did you see that Julia is now credited as Dr. Julia Hoffman Collins? Perhaps there's hope for a marriage between her and Barnabas after all! 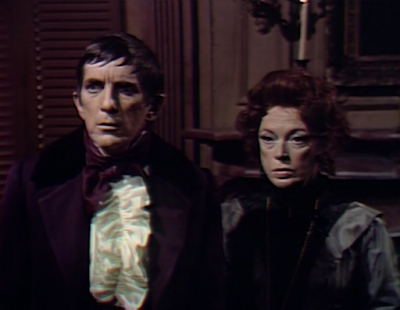 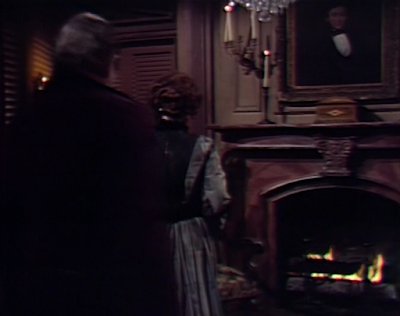 10/28/20 Christine's Addendum: I meant to note this and forgot. I found it odd that Jeremiah's portrait now hangs over the mantel at the Old House. We have only seen it hanging at Collinwood, with the first chronological appearance of it in 1897. It's possible that his portrait was placed here after Barnabas was locked in the coffin, and then later moved to Collinwood. It is difficult to believe that Barnabas hung it there himself after restoring the Old House in this time period. Perhaps he suffers no guilt from killing his brother in a duel over Josette, or maybe having a constant reminder of his terrible mistake is his way of atoning for his death.
Posted by John Scoleri at 6:00 AM