Barnabas enters the room where Roxanne is sleeping. As he leans in to bite her, Julia calls to him. She asks him to stop. He says he must have someone to live with him through eternity. He tells Julia that she will not interfere with him again. He goes to bite her, but stops. He collapses to the ground. 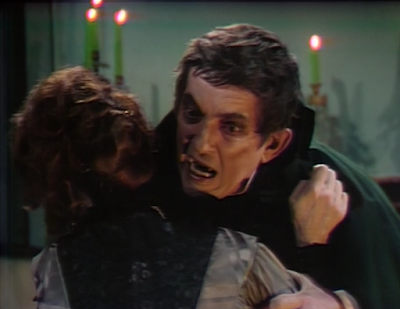 He comes to, and as he gets up Julia thrusts a cross at him. He tells her to put it away and look at him so she can see him. She says he tried to kill her. He says he would have if the I Ching hadn't succeeded. 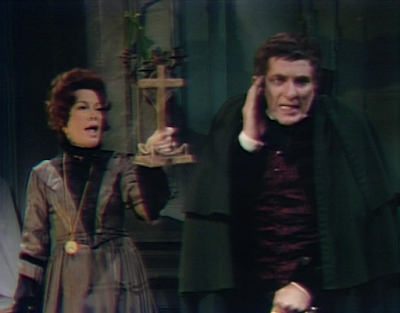 He speaks to her of future events and she puts the cross down and embraces him. He tells her he found her grave showing she died on this day in 1840. He shudders to think that he might have killed her. He then sees Roxanne. He asks Julia about her condition. She says that she'll live, but she's represents a danger to them. They have to get her to be herself again. 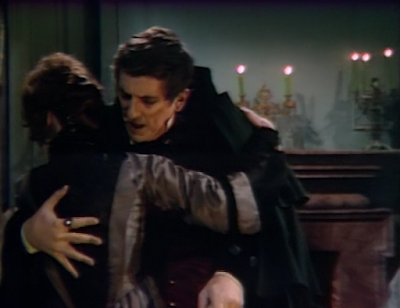 Flora asks Samantha how Roxanne could have disappeared. She says she doesn't know, and points out that four other attacks in the village were identical. Flora offers to make her some tea. 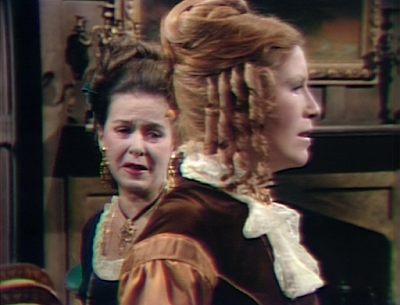 Someone arrives at Collnwood with a large ornate box draped in a cloth cover.

Julia tells Barnabas she sent Ben to get some alcohol but he never returned. She says she's going to see if she can find some. After she's gone, Roxanne stirs. She sees Barnabas and calls to him. She says he's come back to her. He says that something is different. She tells him it's the same, and begs him to come to her. He explains that he cannot. She says he promised they would be together. He says when the time comes, he'll try to make her understand. 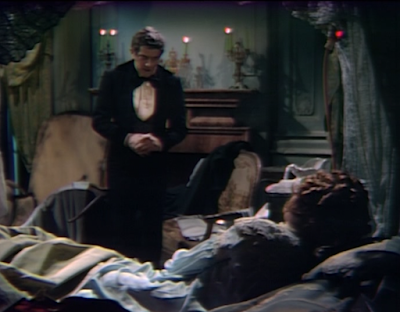 Julia returns and tells Roxanne to lie down and rest. She tells Barnabas that the only thing they can do is try hypnosis to erase her memories. He says he has to meet the family. She explains that she told them that he is her brother, and they are the children of Barnabas Collins. He leaves her with Roxanne, and heads out to Collinwood. Julia prepares to hypnotize Roxanne. 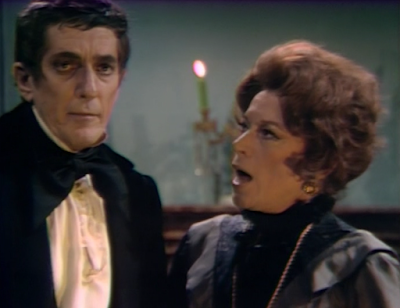 Flora sees the doors open at Collinwood and closes them. She turns to see someone in the house and screams. She realizes that it's her son, Desmond. She's excited to see him. He says he has something to show her, and leads her into the drawing room. He lifts the cover off a box, revealing a head in a display box. She tells him to cover it up. He says he's going to give it to Quentin. She tells him that Quentin is dead. 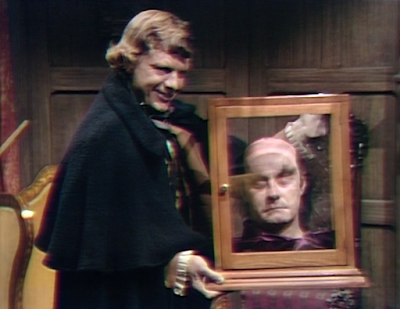 Barnabas arrives at Collinwood, but hesitates before knocking.

Desmond can't believe that Quentin and Tad are dead. Samantha comes in and is happy to see him. They hear a knock at the door and Samantha runs to it. Barnabas introduces himself as having just arrived from England, and mentions that his sister should be there, and is expecting him. She invites him in, and introduces herself. Samantha tells him that his sister hasn't arrived yet. She introduces him to Flora and Desmond. Flora says he has a great resemblance to his father's portrait. He asks if he came at an inopportune moment. Samantha explains that her sister was attacked by a wild animal. 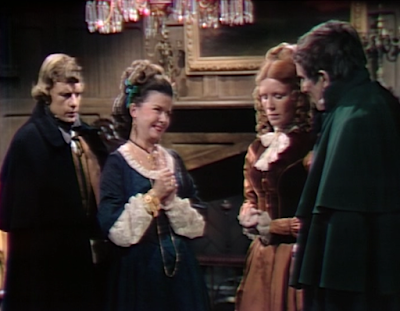 Julia hypnotizes Roxanne. She describes what happened after leaving Collinwood. The lights flicker in the room and go out. Julia hears a noise downstairs and goes out to investigate. She calls downstairs to see if anyone is there. She returns to the room to find Roxanne is gone. 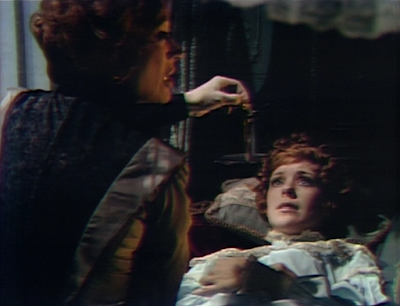 Samantha says she can't believe they haven't heard anything. They hear the front door, and Samantha explains that Barnabas' sister has arrived. Barnabas and Julia embrace. She asks about his trip. He says it was a very smooth crossing. He points out she's shivering, and asks Samantha for some brandy. When she steps out, Julia explains to him that Roxanne got out. 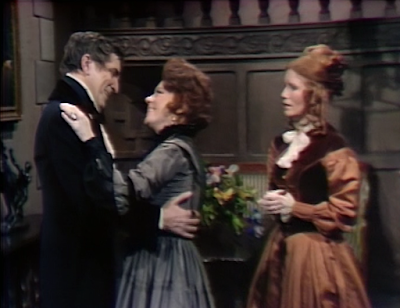 They go into the drawing room, and Flora introduces Julia to Desmond. They hear the front door and are surprised to see Roxanne stumble in. Julia explains she's a doctor, and says they should help her upstairs. Roxanne sees Barnabas and exclaims, "You! I know you!" Desmond asks what she means. She says she was waiting for him. She starts to collapse, and the ladies help her upstairs. Desmond says Roxanne's reaction to Barnabas was puzzling. He asks if it's Barnabas' first trip to the country, adding that it's strange Roxanne singled him out. He points out that if she comes to Collinwood often, she may have seen the portrait of his father. 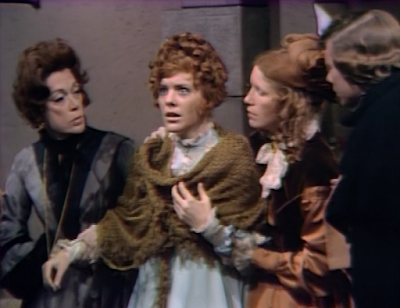 Desmond asks why no one knew about relatives in England. He says that Barnabas and Julia make an odd pair. Flora tells him that Barnabas is very charming. She asks him why he brought the head to Rose Cottage. She says the hideous thing is vile, disgusting and evil. He removes the cover and tells her to look at it. She runs off. Inside the box, the head opens its eyes. 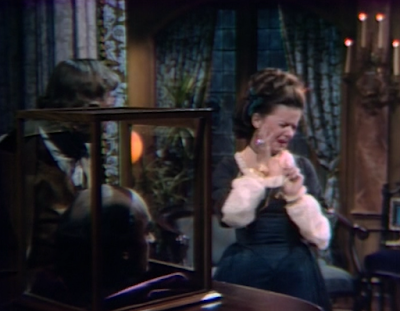 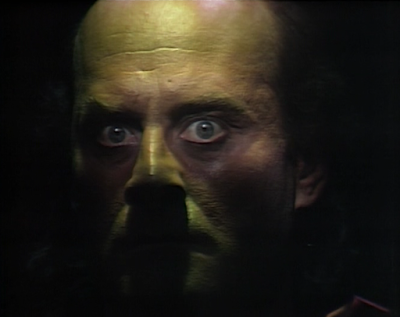 John: The I Ching rarely disappoints, and talk about just-in-time. I do think Julia should have made Barnabas suffer a little longer, even once she realized that he was in fact her Barnabas back in the older model's body.

Christine: I wonder how many tries before he got the 49th hexagram of change. Julia was too happy to see her loverboy and too relieved to evade certain death to make him suffer.

John: We welcome another familiar face in Desmond Collins! Again, we'll choose to ignore the fact that we're finding out about relatives who didn't rate mentions in the family history up until now. And is it just me, or is there something weird about Flora being his mother? Maybe it's the portrayal of Flora that's throwing me off...

Christine: I don't find anything weird about it other than that we don't know what happened to his dad.

John: Head in a box alert! Now, you may wonder why Desmond would bring a head in a box as a gift for his uncle Quentin, but I say there's always room in Collinwood for a head in a box! Can't wait to see how this disembodied cranial cavity will play into the 1840 storyline!

Christine: If all else fails on the show, bring in a body part in a box! 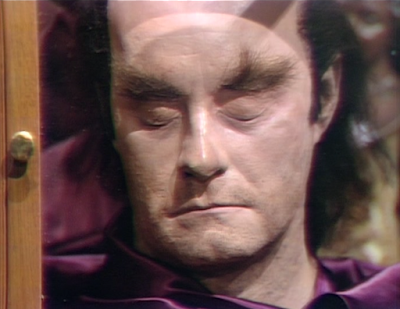 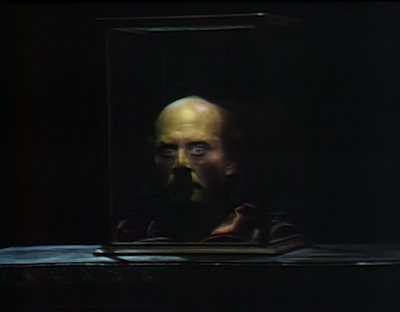 Back when I was nine my friends and I thought it was funny that two characters would be billed as "The Head" and "The Body."