Leticia leads Julia to the body. It's lying on the ground in the secret grave. Julia says it's not moving. Leticia uncovers the boxed head, and Julia stares into Judah Zachery's eyes. She realizes that Leticia is under his power. She turns away, but can't help but return to stare into his eyes. 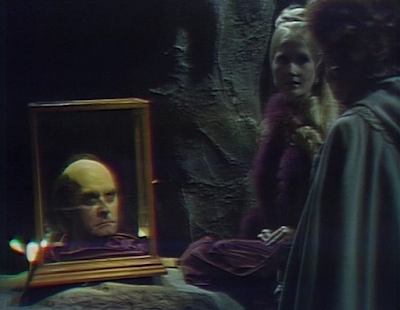 Leticia asks Julia if she knows what she must do, and she says they are to join the head with the body. Julia checks the body and asks Leticia for her brooch. She pokes the body with the pin, and says the body is perfectly preserved. 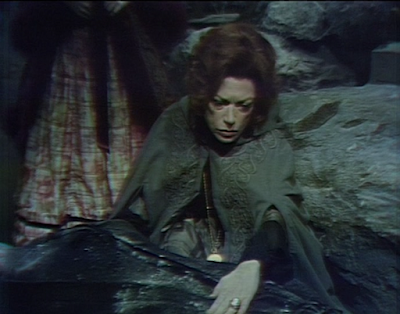 Quentin looks at the unsigned note. He reads Joanna is dead and you are responsible. An old woman, Mrs. Purdy, arrives and he leads her into the drawing room. He asks her if Joanna is dead, and she nods. She said she knew when she got his letter that he wanted the details. She says when she rented Joanna the cottage, she didn't ask any questions. She knew she was a widow, and didn't become her friend until he stopped coming there. She says Joanna was never herself after he left. She only spoke of him. He explains that he couldn't get a divorce, and that's why he stopped coming. She says the last time she saw her, she told her about Quentin being at sea. She adds that she went to see her the next day and she found her with her wrists cut. She didn't want to live, and the doctors insisted she go to an asylum. She then escaped from the asylum, and her body was found washed up on the shore. Quentin has trouble believing it. He says someone else knows, and blames him. He shows her the note. 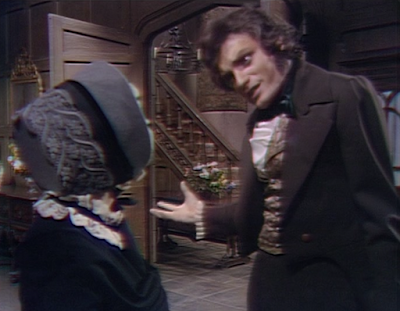 Samantha comes downstairs at Collinwood just as there's a knock at the door. Daphne introduces herself as the new governess hired by Mr. Collins. Samantha is surprised. Daphne apologizes for upsetting her as Quentin appears and welcomes her. Samantha glares at him. He sends Daphne into the kitchen. Samantha follows him into the drawing room. She tells him that she hires the governesses, and he says that used to be one of her responsibilities. 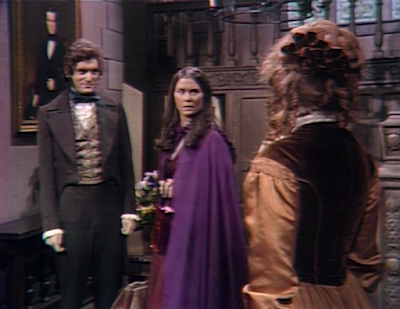 Daphne writes in a diary that at last she is in his house, and she must be careful that he not know how close death is. She admires a small pistol. 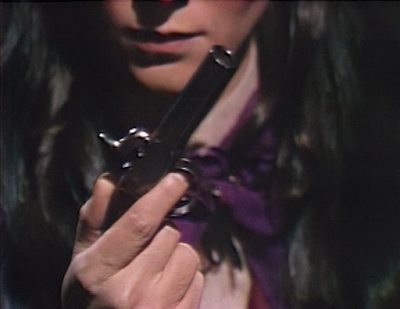 Gerard deals out Tarot cards when Samantha walks in. She asks if he sees her in his future. She explains that she couldn't come before, because Quentin won't let Tad leave. She begs him to hold her, and he says no. She reminds him that he loves her, and married her. He says the marriage is not legal. She tells him they'll show Quentin, and he tells her that she's wrong. She realizes that he wanted her for her money. 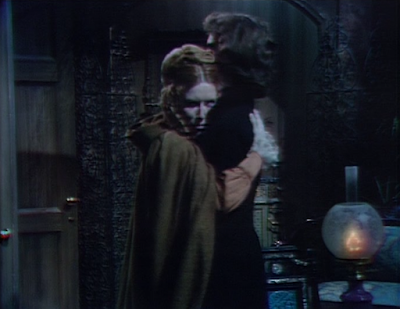 Quentin tells Gerard he wishes he hadn't told him. Gerard says he realized he risked his friendship by telling him, but he felt they must be completely honest with each other, lest they become enemies. Daphne comes in, and Quentin introduces them. Gerard kisses her hand. Quentin takes Daphne upstairs to show her Tad's schoolbooks, and Gerard tells him that he has to send her back to him when they are through. 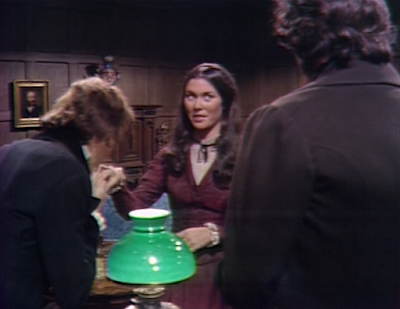 Gerard sees a pouch Daphne dropped on the floor, and looks inside to find the small pistol. He puts it down and Daphne comes back in. He says Quentin kept his word and sent her back to him. She says she forgot her reticule. He says she did, and it was quite a mistake, if she planned to kill Quentin. She looks at him, and he calls her a modern-day woman. She's surprised he went through her things, and he tells her that he's shameless. He asks her why she carries it. She refuses to answer. She says she doesn't intend to die like the last governess. He takes her arm and tells her that he will walk her to the bedroom. 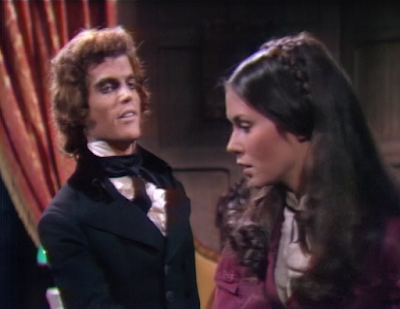 Leticia asks Julia where she's supposed to get the drugs she asked for. Julia reiterates that she needs everything on the list. Leticia says she doesn't want to see his eyes if they fail. 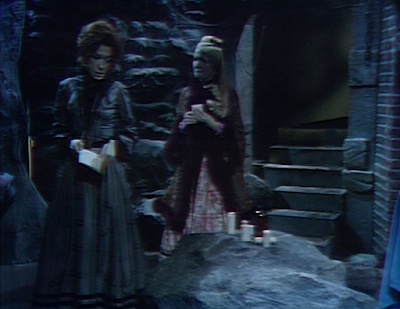 Quentin sits in the drawing room, wondering who could know about Joanna.

Quentin finds another note on the table next to him. He recognizes Joanna's writing, mentioning how they have no chance for happiness, since his wife would never allow it. She says this time they will not let his wife ruin it. He says Joanna must not be dead, but Mrs. Purdy says she is. He can't figure out how he keeps getting these notes. 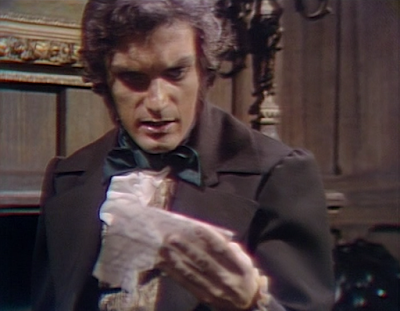 John: How do you think the head knew that Julia had Frankensteining experience? How many disembodied heads and headless bodies have access to just such a resource?
Christine: This is Dark Shadows, where supernatural creatures know all, have the power to do all, and cannot ever be truly killed. The Head probably drew Julia back to the past just for that purpose. Incidentally, was the Headless Body out partying all night or just rolling around in the dirt? What's with all the powder it picked up on it's suit overnight? 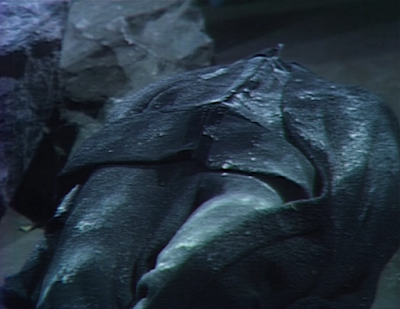 John: So now we know... the mystery dead friend was the previously never-mentioned Joanna? Timing would suggest that Daphne was Joanna's pal in the sanitarium, the one leaving all the notes, and providing her with a motive for killing Quentin. I hope I'm surprised, but I won't be holding my breath.
Christine: I assume that Joanna was the one fling Quentin referred to when he and Samantha argued about her choice to be with Gerard, so she may have been mentioned, but unnamed. Daphne could be a pal, though it's usually family relation that drives an obsessive need for revenge, so it's more likely she's a sister or cousin.

John: Poor Samantha. She's been kicked to the curb by both Quentin and Gerard, and now she's going to have to sit back and watch Gerard flirting with Daphne! Can't say I feel that bad for her... 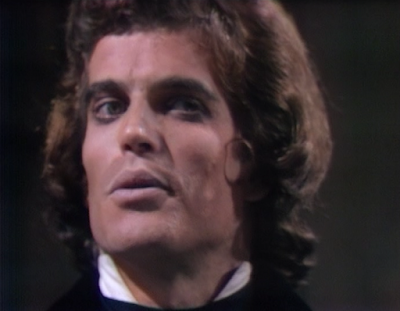 Christine: I don't think we can expect Daphne to be successful with her assassination plot when she just drops her "reticule" on the floor and doesn't even notice. I'm surprised nobody heard it thud on the floor or that the gun didn't go off when she dropped it. Gerard seemed quite pleased with his tarot card spread today, which is not the usual reaction when a character draws La Mort. 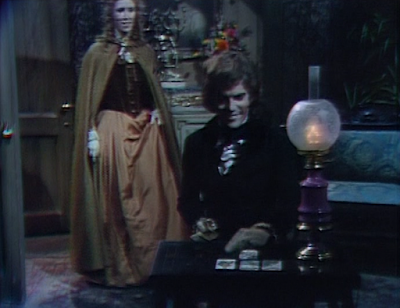 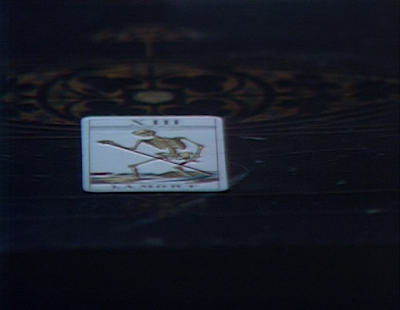