Quentin finds another note on the table next to him. He recognizes Joanna's writing, mentioning how they have no chance for happiness, since his wife would never allow it. It says this time they will not let his wife ruin it. He says Joanna must not be dead, but Mrs. Purdy says she is. He can't figure out how he keeps getting these notes. 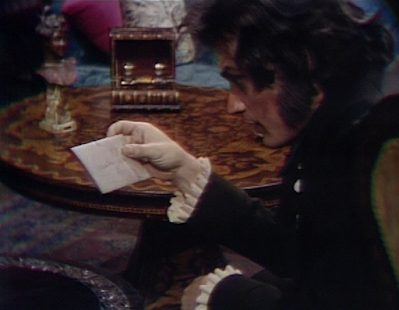 Trask walks in and Quentin asks if he ever performed services for a woman named Joanna Mills. He says there was a Mills — Frank. Quentin reiterates Joanna, and Trask says he didn't perform her service. Trask tells Quentin that he thinks Barnabas' father had something to do with his own father's disappearance. He says there is no record of Barnabas' father's death in London. He also adds that there is no record of the current Barnabas living in London. He asks Quentin if he's considered that Barnabas might be an imposter. Quentin says he certainly looks like his father's portrait, and Trask says he may look be too similar. Quentin says he doesn't know what he means, and suggests his questions have to do with his rivalry with Barnabas over Roxanne Drew. Trask asks to speak to Samantha, and Quentin says he'll let the servants know he's waiting for her, and walks out. 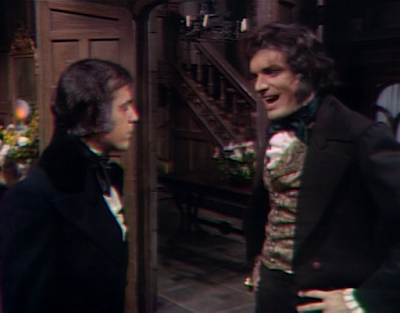 Trask admires the portrait of Barnabas when Angelique comes in. She is shocked to see him. He sees her and asks if they know each other. She introduces herself as Valerie Collins, Barnabas' wife. He's surprised. He says he had no idea he was married, and excuses himself. 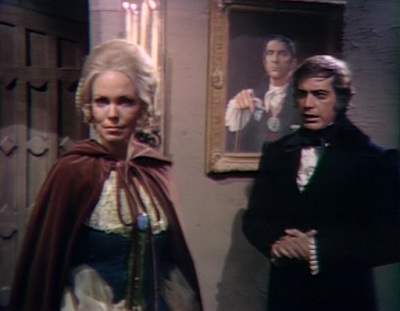 Quentin finds Joanna's grave, showing she died in 1839. He now believes she's dead, but can't understand how he received a note from her. 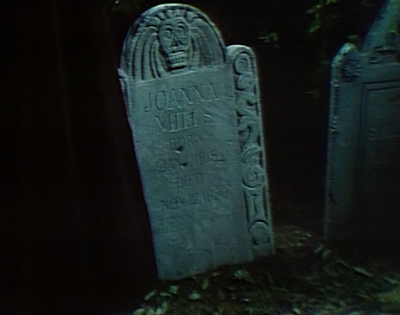 Roxanne tells Trask that she's leaving to go to Collinwood. He asks her if Barnabas will be seeing her there. She says he has been very kind of her. Trask mentions that Barnabas was concealing the fact that he is married from her. She says she doesn't believe him. Trask says he seems to have neglected to tell anyone of his marital status. She tells him goodnight and leaves. 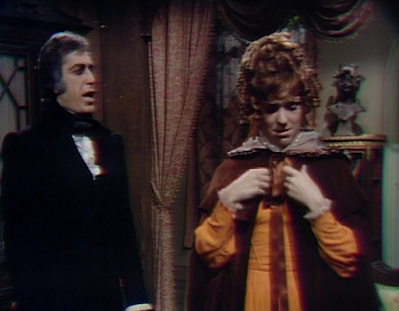 Angelique stares into the fire when Barnabas comes in looking for Quentin. She says they have a great deal to discuss, and Barnabas says they have no more to say. She asks about Julia, his 'sister.' She reminds him his sister was Sarah, and he says she's responsible for Sarah's death. She replies that perhaps she can do the same for Julia. She asks where he found this sister, and he tells her to make up any story that will satisfy her. 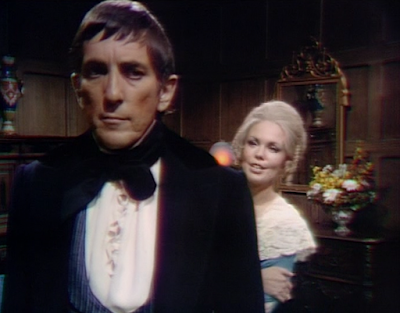 Angelique asks if Julia knows what he is, and if he loves her. He explains that they're just friends. She asks where he found such a good friend. He tells her it's not wise for them to discuss things in Collinwood. He asks if she intends to threaten Julia, and she says as long as he's not in love with her, she's in no danger. She goes to get tea. 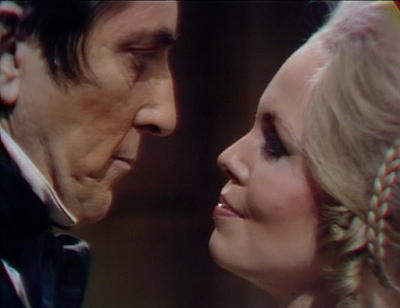 Roxanne arrives at Collinwood. Barnabas sees her, and she refers to him as Mr. Collins. She asks him if it's true that he's married. He reluctantly admits it. He asks her to forgive him, and says there's no possible way for him to explain. She says she was terribly wrong about him. Angelique comes in with tea, and Barnabas introduces them. Roxanne goes upstairs to see Samantha. 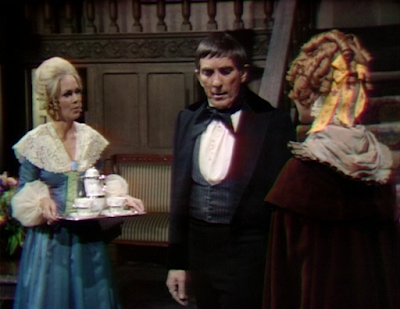 Angelique realizes that Roxanne is the one he loves. Barnabas tells her that she's imagining it. Angelique asks if she'll find wounds underneath the lace around her neck. Barnabas tells her to leave Roxanne alone. She says he has no right to give her orders. She runs off and he asks her to promise him, but she refuses. 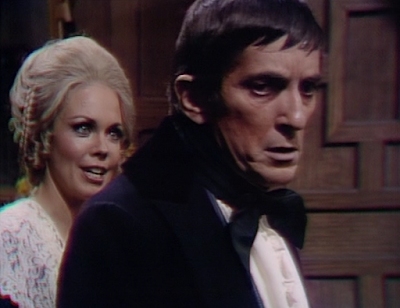 Quentin returns to Collinwood, and finds Barnabas upset. He asks if he's heard any reports of the headless man. Barnabas says he had some things to discuss with him, but then sees a note underneath the door. Quentin picks it up and says, Joanna. He asks Barnabas to leave him, and he does. Quentin reads the letter, which says she will be waiting for him at the oak tree. 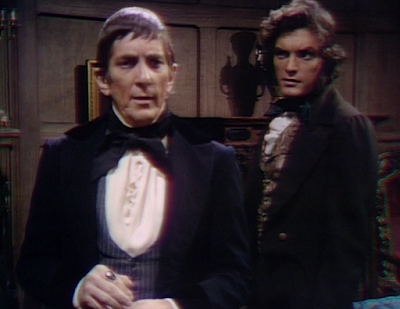 Roxanne returns to her home and finds Trask waiting for her. He asks her if she met Mrs. Collins, and believes him now. She says she does.

Angelique speaks to Roxanne in the fire, saying that Barnabas is hers, and shall remain hers. She lifts up a voodoo doll and says that she must pay for loving him. She prepares to stick it. 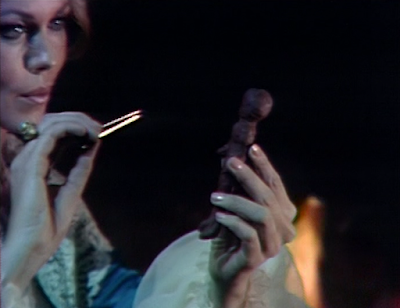 Roxanne grasps her throat and falls to the ground as Trask asks her what's the matter. He turns her over and finds a bloody wound on her neck. 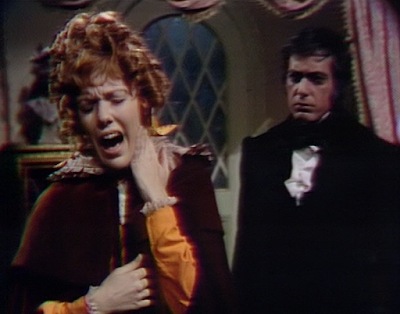 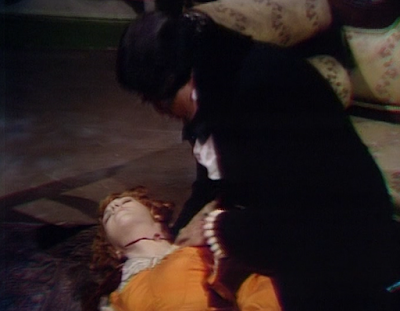 Barnabas asks Quentin if there's anything he can do to help. Quentin tells him he had a crazy idea of building a staircase that he could use to travel through time. He says he believes a person could go back in time and change what has already happened. Quentin leaves, and Barnabas says he must let him help him.

At the oak tree, Quentin calls to Joanna. He finds another note saying she can't understand why he didn't come. 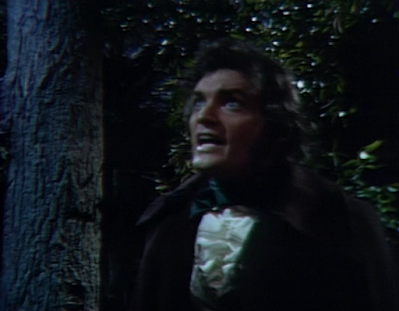 Trask tells Barnabas that Roxanne's wounds were reopened and the doctors couldn't stop the bleeding. Barnabas says he'll send his sister over right away. Trask leaves, and he sees Angelique at the top of the stairs. He says he knows she's responsible, and asks him where the doll is. He demands that she remove the pins. She asks why he wants her to live. She says if she dies they can spend eternity forever. Angelique says her fate is in his hands. She wants him to live with her as man and wife, and if he refuses, Roxanne will die from his attack, and become as he is — a vampire. 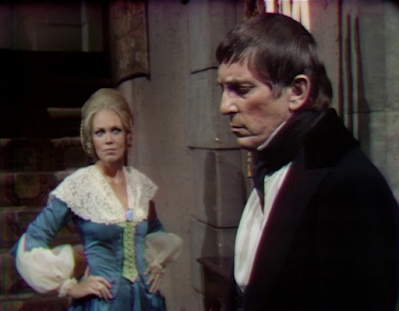 John: I loved Trask's reaction to hearing that Barnabas was married. It was as if suddenly nothing else mattered! Sorry pop, no time to avenge your death now, I have to got tell the girl of my dreams that her new beau is married!
Christine: It was funny the way he delivered the news with the gusto of a gossipy old hen. If Joanna's gravestone seemed familiar, it's because it was the same style used for Jeremiah Collins' grave.
John: Poor Julia. She's in no danger because she'll never get out of the friend-zone with Barnabas!
Christine: His declaration that they are only friends proves that he really loves her, as he sought to protect her from Angelique by downplaying their relationship.

John: What was with shoe-horning Quentin's time-travel staircase plans into the narrative today? And since the staircase is how Julia arrived in 1840, wouldn't that suggest that the magic staircase had already been created? Wouldn't she otherwise be limited to going back to the time once it was built and functional?
Christine: It's possible that Quentin's staircase only became a reality because Julia and Barnabas traveled to the past to convince him to build it. Try and wrap your brain around that time travel conundrum. Quentin was having a rough day today. First, he cursed while struggling to open Joanna's note, then he thumped his head on the door frame! Could it have anything to do with the brandy? 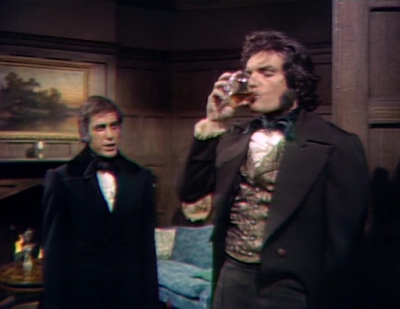