Barnabas sees a woman in the woods that he recognizes as Daphne. He grabs her and asks her what she's doing. She says her carriage broke down. He accuses her of being there to meet Gerard Stiles. She says she's never heard the name before. 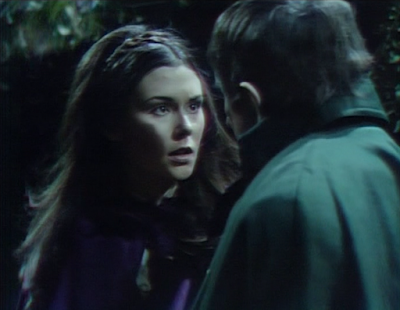 Desmond is pleased to find Quentin is alive, and says that he hopes the decision Samantha makes is what he wants. He tells Quentin to come to Rose Cottage tomorrow to see a gift he brought back for him from the Far East. 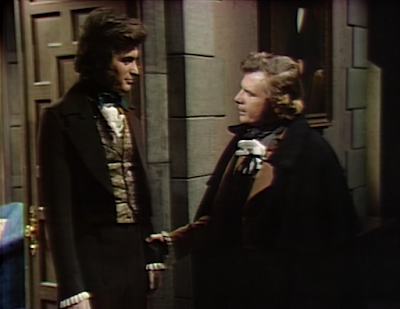 Daphne asks Barnabas if she's met him before, and why he's so suspicious. He introduces himself, and asks her name. She says she doesn't need to tell him her name. He says he'd hate to have to force her, and Desmond steps forward asking why he would have to. Desmond appears enamored with Daphne and offers to escort her back to her carriage. She tells him not to bother. He introduces himself, and she agrees to go with him. 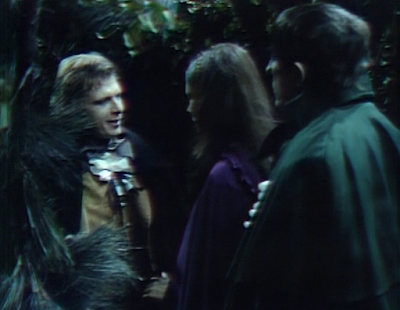 Julia asks Barnabas why Daphne wouldn't know Gerard's name, and why she didn't come to Collinwood. He says she was there for some other purpose. He says she said she was leaving Collinsport tonight. He says the drama will now begin to unfold, and they must change it, or Collinwood in 1970 will be destroyed. 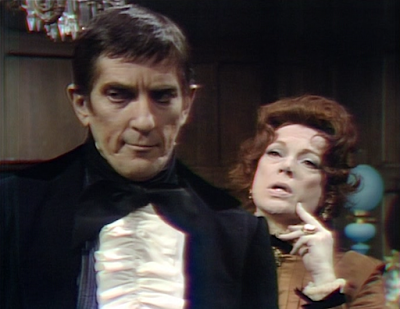 Desmond and Daphne sit in a restaurant. It turns out the carriage was working after all. He says he hopes she'll stay in Collinsport. She says she must go, and he tells her she hasn't finished her tea. He assures her the Collins' have a very respectable reputation. He says he could tell her about his mother, the worst, fastest novelist, or his cousin Barnabas, and she asks him to tell her about Quentin Collins. 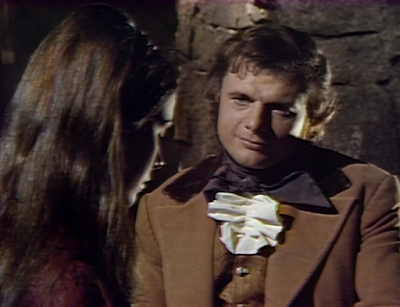 Desmond finishes telling Daphne about Quentin. He asks if he bored her, and she says he did not. Desmond continues to hit on her. She asks if Quentin and his wife were happy. He says he never heard either one complain. He tries to convince her that he's a reason to stay in Collinsport. She reiterates that she has to go. He tells her that she needs to at least stay until morning, and she agrees to stay at the Inn. He tells her not to leave before he sees her in the morning. 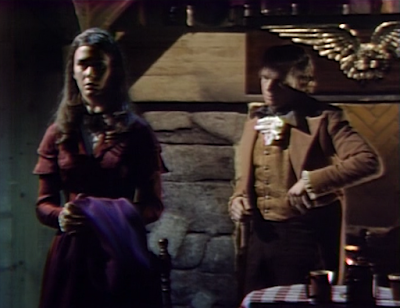 Gabriel wheels into the drawing room where Julia offers him some coffee and a muffin. He asks how she happened to become a doctor. She says she studied with a physician privately. He asks if she has a license to practice, and she says not here. He says he might have her look at his legs. He explains he had an accident as a child, when his brother Quentin — dropping his cup when Quentin walks in. 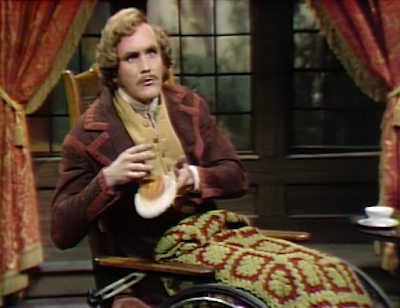 Quentin explains that he's not a ghost. Quentin introduces himself to Julia. Gabriel tells him that he should have woken him. He asks how he survived the storm, and Quentin says he can read about it in his memoirs. Gabriel asks how he can act so normally. He asks if Mrs. Gerard Stiles will walk through the door. He says there's just his wife Samantha, who has gone to Boston to be with Tad. Julia excuses herself. Gabriel asks if he found out what Samantha is really like. He says she tried to throw him out of the house. Quentin says he must have given her a reason. He says he's always felt responsible for him, but he's become so bitter that even he finds it hard to find affection for him. 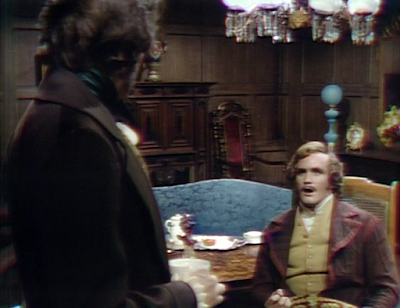 Desmond examines the head in the box when Quentin arrives at Rose Cottage. He calls from outside saying he's come for his present. Desmond closes the drapes in front of the head and lets Quentin in. He says he's in dire need of a marvelous present. He asks what Desmond brought him. He says he brought him rare books on the occult. He hands him two books. Quentin thanks him, and begins to flip through them. Desmond peers between the curtains to see the head. He says he used to think Quentin and his mother were silly for believing in the occult. Quentin asks what changed his mind. Desmond says he remembered he has to go to the village, and tries to rush Quentin out. Desmond adds that Ben's funeral is today, and Quentin wonders what made him try to cut his own head off. Desmond leads him out to his carriage. 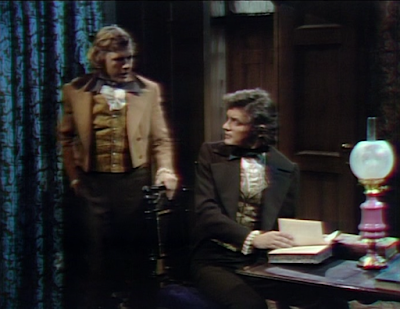 Barnabas is in Rose Cottage when he sees Desmond peer between curtains. Desmond says they missed him at Ben's funeral. Barnabas asks Desmond what he found out from the girl last night, and where she's staying. He says he left her at the Inn, but this afternoon she was gone, and left no forwarding address. He adds that her carriage wasn't broken at all last night. Barnabas asks him her name, and he says it was Daphne. He says he really wants to see her again, and Barnabas says that he does, too. 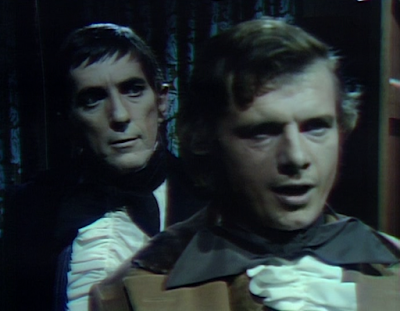 Barnabas asks Julia if she checked with the boarding houses in town. She says she did, and he assumes she left Collinsport. Julia says she'll return. While they speak, Daphne sneaks in and leaves a note. She overhears Barnabas mention that they 're pretending to be people they are not. She sneaks back out. Barnabas suggests they should tell Quentin the truth, and she says they don't know him well enough. 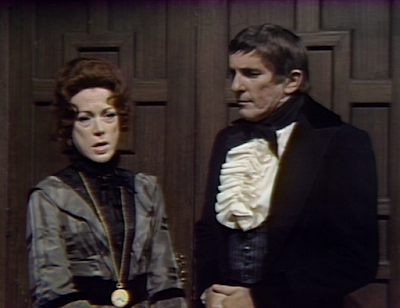 Quentin comes downstairs and finds the note in the foyer. He bursts into the drawing room and demands to know who left the note for him.

Desmond closes a window banging in the wind in Rose Cottage. He goes to the head in the box and stares at it. He asks if the legends are true. He turns away from it, and its eyes open. He turns back and they are closed. He sits down and falls asleep, dreaming. He hears a voice tell him that he will help him, and he sees the open eyes in the decapitated head. 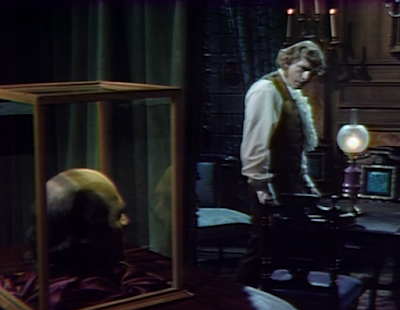 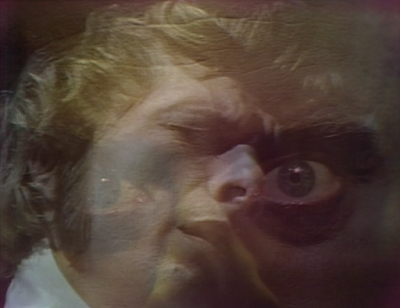 John: Well there you have it. Barnabas and Julia are planning to save the future. Perhaps they really didn't know at this point that they wouldn't make it back to 1970.

Christine: Who says they won't? Have you been reading spoilers?

John: I love how Desmond talks of how Daphne's carriage 'started working.' Clearly Desmond was not fooled by this, but the notion that one could describe a carriage breaking down like an automobile, in such a way that you might find that it actually still works, was a bit of an anachronism.

Christine: Gabriel is working his stress ball again today. Do you suppose he's working both hands equally, or just the right hand? If this keeps up, I'm going to have to start a stress ball tracker! 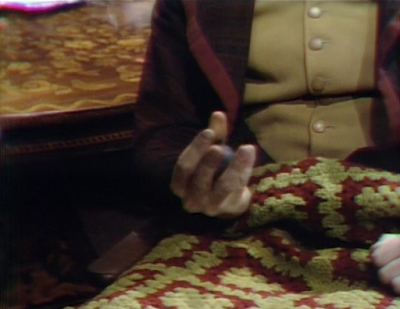 John: Is today the first day 'The Head' was credited? If so, I assume that's because it finally spoke (not that speaking has been a prerequisite for screen credit. Think of how long it would have been for Gerard or Quentin's ghosts to get credited...
Christine: The Head was first credited in Episode 1117 as 'Head', and in Episode 1119, it was credited as 'The Head'. 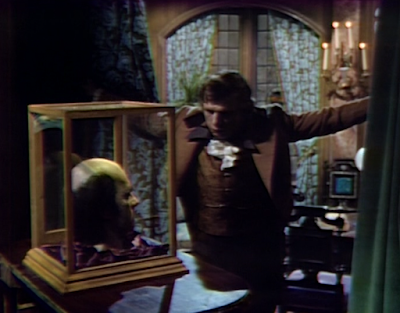