Desmond reads from the Journal of Judah Zachery. It says after 200 years of waiting, I will find the answer, the search will be over and I will know what I must — Otis Greene will be here. Leticia walks in and says she can feel evil in the room, and faints. Desmond runs to her and helps her up. She tells him to get away from her. She says she sees madness and death in the room. He seems possessed and tells her she will tell no one what she saw. She asks him to let her help him. He tells her that she's imagining things, and tells her to forget it. 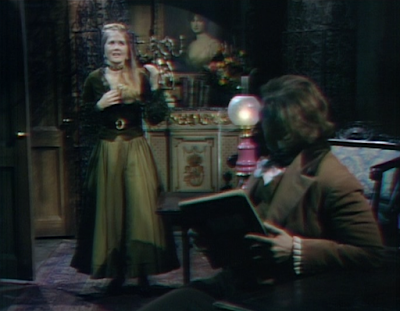 Leticia returns to the room and says that she still feels it. She sees the Tarot cards, and picking up the top card reveals the tower of destruction. She then pulls back the curtain revealing the head in the box. She screams, "EVIL!" 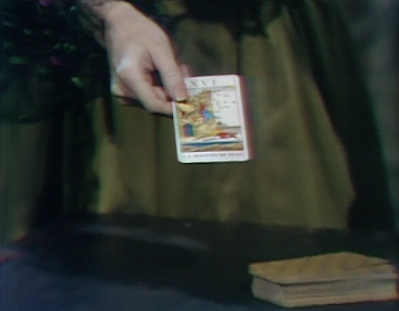 Barnabas tells Roxanne he's glad to see her feeling better. She says she's embarrassed for acting like he was responsible for what happened to her. Trask walks in, and says his prayers have been answered now that Roxanne is well again. He tells her that he warned her about going out alone at night. He then says he made an interesting discovery that may help the police find who attacked her. He questions her and Barnabas tells him that he doesn't think he's helping. Trask says Barnabas is like his father, and pulls out a letter in which it's detailed how Barnabas 'father' ridiculed Trask's father in 1797, when similar attacks occurred. Trask goes to read the letter and Barnabas tells him it has no relevance. Trask accuses Barnabas of being in league with the power of darkness. Roxanne says she can't believe she ever wasted five minutes on Trask, and asks Barnabas to let her speak to him alone. 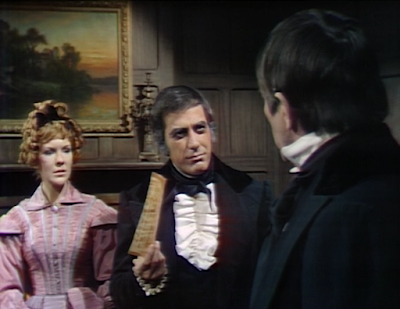 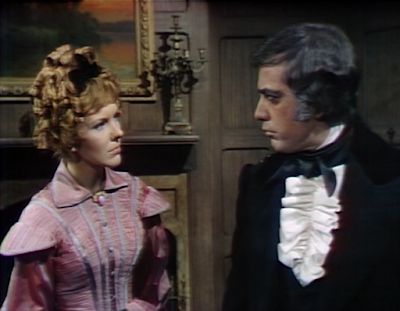 Leticia comes in and asks if Trask is bothering her. She asks for Desmond, and Roxanne says she hasn't seen him. Barnabas returns and tells Roxanne that his sister is ready to see her upstairs, and he escorts her out. Leticia says she's there to meet Desmond. Trask introduces himself, and when she says who she is, he says she's from the circus at Rose Cottage. She says she looks into men's souls to see their secrets. He says only the almighty has such power. She tells Trask that she sees he's out for revenge for someone close to him — someone he doesn't even know. He asks if she can see where is father's body is. She says she'd need something of his, and Trask pulls out the letter. He says he's convinced his father was murdered in Collinwood. She says she wants to have nothing to do with murder, and he says it will bring peace to his father's tormented soul. 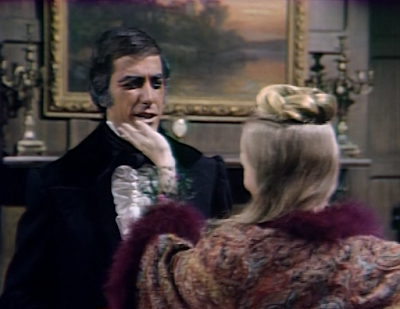 She takes the letter and holds it to her forehead. She sees a vision of the old house. She says she sees a man, but cannot see his face. Barnabas comes downstairs and hears them. He walks in on them and interrupts Leticia. Trask takes the letter, and Barnabas tells her that Trask was taking advantage of her gifts. Trask tells Barnabas that he interrupted her too late, and leaves. Leticia tells him that she needs to find Desmond, and he says she's going nowhere until she tells him everything. 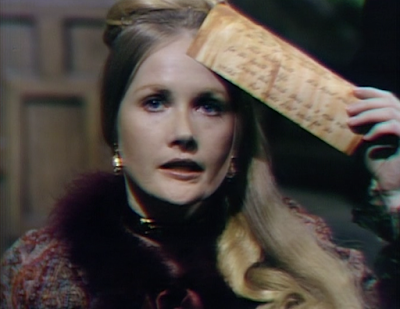 Desmond writes in Zachery's diary saying that Greene will soon be there, and he will find out where his body is. 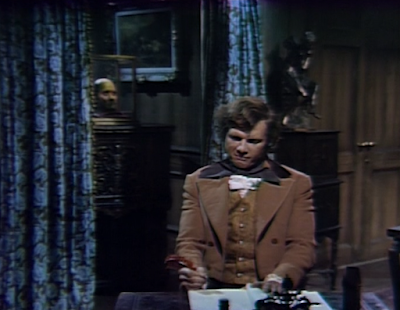 Barnabas finds Trask searching the old house. He says that he and his sister have been given the house, so he might have waited for an invitation. Trask says he knows his father is buried in the house. Barnabas asks him to leave. Trask says that he will return. 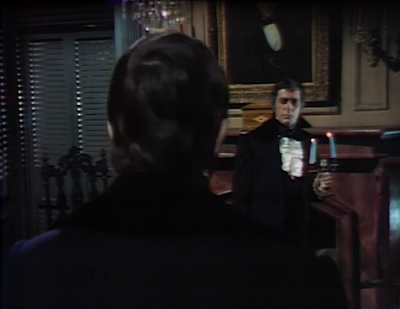 Desmond puts the diary away and closes the curtain to hide the head. An old man, Otis Greene, comes in and admires the furniture and antiques. Desmond points out a table that came from Bedford, after the witch trials, and says the owner was hanged for being a witch. He asks Greene if he knows about the witch trials, and Greene says his family came from Bedford, and his grandfather was an executioner. He says there's a curse on the executioner's family. Desmond tells him he has something else that will really interest him, and tells him to open the curtain. Greene does, revealing the head. Desmond says it's an old friend of his. Greene says that Desmond is under his power. He refuses to look at the head. Desmond says that he knows where the body was buried, and demands to know. Greene says the only way to stop it was to cut off the head. He grabs his heart. Desmond yells at him. Greene says the noose... the regal guard... and the stairs. Desmond yells at him to tell him where the noose is, and he says an unmarked stone, as he collapses, dead. 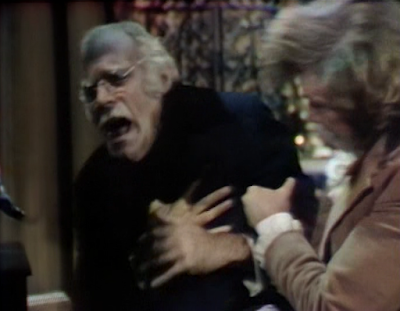 Desmond tells the Head it will be found. 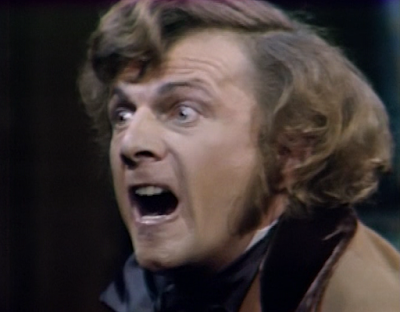 John: So now we know what the head wants... and it's almost so pedestrian that it's disappointing. Why does it need its body when it clearly has the ability to possess others? Is this going to be another re-run of the Hand of Petofi? I'm hoping for something fresher.
Christine: That may not be a realistic expectation at this point in the show, but hey, a decapitated head searching for a headless body can't be all bad, can it? Listen, if you were an evil decapitated head, wouldn't you want to have your own body so you could run around spreading evil at will instead of having to rely on possessing others? I just wonder why Judah Zachery feels the need to document his evil in a journal, or why he isn't more discreet by leaving his name off the front cover. 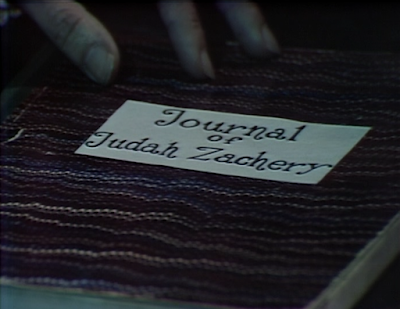 John: How long do you think we'll have to wait before we get to see one of our old skeleton pals standing in for old man Trask's body behind the brick wall in the basement of the old house?

Christine: I hope the skeletons will come out before Halloween, but we'll see. Trask says that the letter that proved Barnabas' daddy was mean to his daddy was written to his dear mother. I wonder where the good Reverend Trask was hiding his good wife. He surely made no mention of her back in 1795 1796 1797.

John: Abe! What a welcome surprise after all these years! While it's disappointing that he appears to have only been called upon to walk in and die, I can't help but be amused by the fact that he was a go-to solution when they needed a really old man on the show, considering that even by this point, he wasn't quite 50 years old! 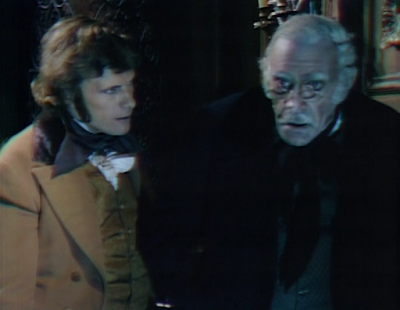 Christine: It's like Ezra Braithwaite all over again! At least he got to admire the antiques before having Desmond throttle him while in the throes of a heart attack. Someone left the tarot cards out from yesterday, so it was inevitable that The Tower (of destruction) would make an appearance, as it often does when tarot is in use on the show, along with Death. 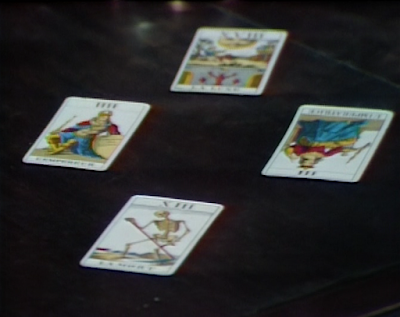 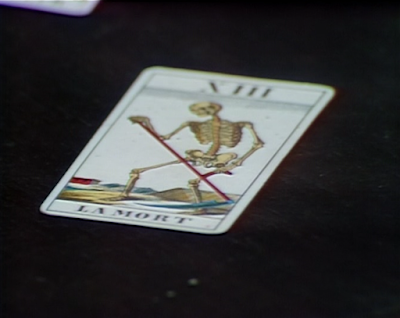