Samantha enters the drawing room. She closes the door and tells Quentin that he looks tired. He asks her if she has made up her mind. She says that she knows with whom she must spend the rest of her life. She hesitates, and turns away from them. Quentin asks her to speak with them separately, and she asks to speak to Gerard first. 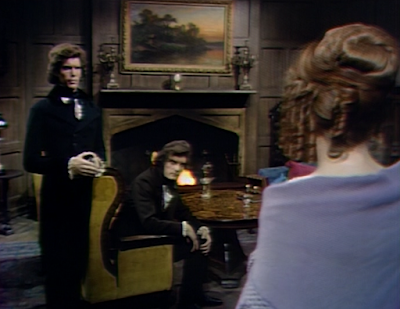 She tells Gerard it has been a painful and difficult decision. He tells her that he doesn't envy her. She says she thinks he knew from the beginning what she'd decide, and he says yes. He says she mustn't regret her decision. He says he feels a woman must stay true to her first love. She agrees, and says that's why she's chosen him. He's shocked. She's surprised that he thought she would choose Quentin. She embraces him, and asks if he's unhappy. He asks if she's sure she made the right choice. She says if she had chosen Quentin, she'd still have gone on loving him. Gerard says he'll go back to Rose Cottage. She tells him that she's going to make him happy. 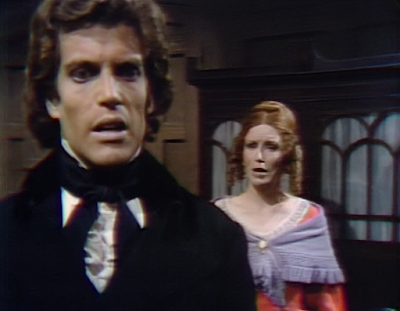 She leaves, and Gabriel wheels in, laughing. He asks if Gerard is glad he didn't take his wager. Gerard tells him that he and Samantha are very much in love. He tells Gabriel to get out, and Gabriel reminds him where he is. 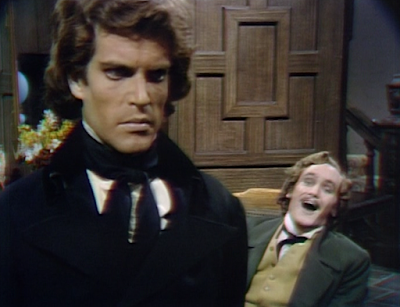 Samatha comes to see Quentin. She explains that she's chosen Gerard. Quentin says he was convinced there was only one choice open to him. He says she has everything she could ever want in Collinwood. She adds except love and happiness. He asks how many people have that. She says she must take her chance at that. He reminds her that she denied him of a similar opportunity four years ago. She says she didn't understand what he was going through then, but she does now. He asks if she and Gerard love one another, and she says they do. He says he thought she'd want to go on for Tad's sake. He asks what she'll do if she decides she was wrong. She assures him that she knows she's right in her heart. She begs him for an answer. He tells her that he'll talk to his attorney tomorrow, and there's nothing more to say. 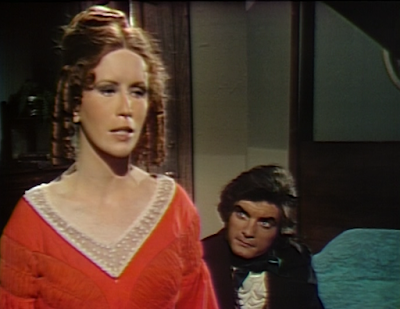 She says she's going to tell Tad, and get him ready to go with her. Quentin tells her that she won't do any such thing. She says Tad belongs with her, and he tells her that Tad will not leave Collinwood. She asks him to be reasonable, and he tells her that she's asking to take his son, and expecting him to be reasonable. She demands that she get custody, and Quentin says he's his son just as he is hers. She says that's not true, and adds that Quentin is not Tad's father. He asks what she means. He refuses to believe her. Quentin asks if he's not his father, then who is. She says he'll never know. He throws her on the bed and demands to know how the father is. She says it was someone else. He tells her she can go wherever she pleases whenever she wants, but he won't let Tad go with her. He threatens to kill her is she says anything to Tad about his father. She runs off. 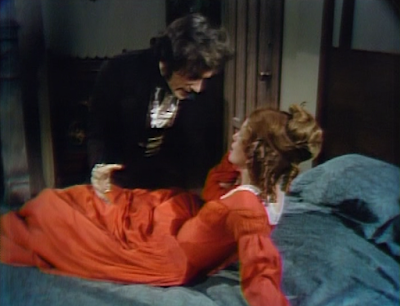 Gabriel is in the foyer when Samantha comes downstairs. He asks if she's upset because Quentin calmly accepted her decision. She tells Gabriel that Quentin has refused her her freedom. Hortense comes in and Samantha asks to see her in the drawing room. She tells Gabriel that the two of them are destined to rot in Collinwood. She then goes into the drawing room. She tells Hortense that she's leaving Collinwood, and taking Tad with her. She tells her to pack his bags secretly, and to bring Tad to her at Rose Cottage at 7pm. Gabriel eavesdrops on their conversation. 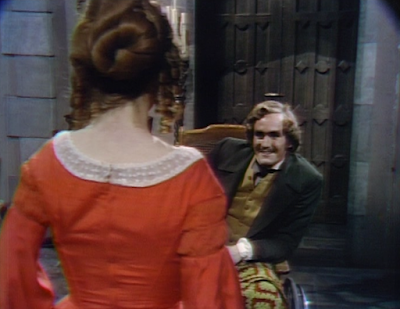 Gabriel wheels into Quentin's room, and says someone is plotting to abduct the crown prince. He says he overheard Samantha talking to Hortense, and she's planning to leave with Tad that night.

Hortense goes to get Tad and is shocked to see Quentin standing on the stairs. He asks her what she's doing, and she makes up a story about his schoolwork. He grabs her and calls her a lying sneak. He says he knows she and Samantha were planning something. He tells her to tell Samantha that Tad is staying in the house with him. He adds that Samantha will never see Tad again, and he fires Hortense. 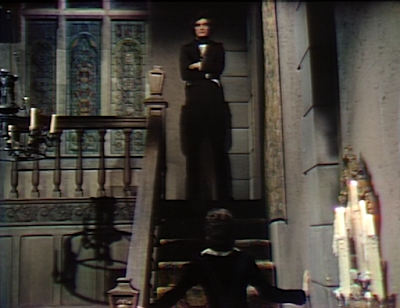 On her way to Rose Cottage, Hortense finds a body in the woods. She realizes that it's missing a head when it sits up and grabs her. 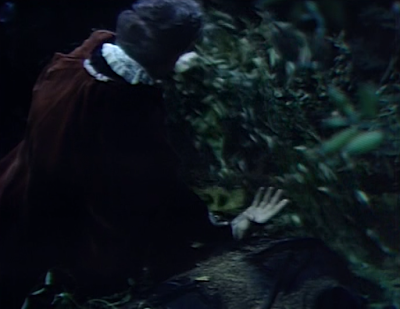 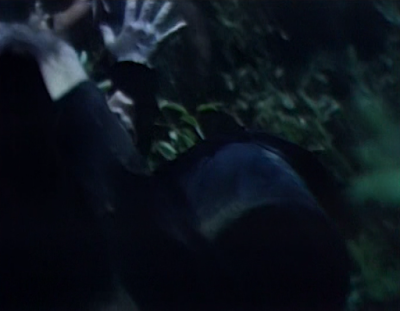 John: Interesting to see that both Gerard and Quentin seemed surprised by Samantha's decision. If the two work together, it seems like they could both be free of any problems in no time at all!
Christine: Well, she did set it up in such a way to fool them both. It would have been more proper to deliver the news to the loser first so he wouldn't have to wait in anticipation of good news.

John: Today we got a grand soap opera reveal — Tad is NOT Quentin's son! Which begs the question, whose son can he be? Unless it's someone we haven't met, it almost certainly would seem to be Gabriel. How's that for a Collins-twist!

Christine: You're forgetting both Ben and Daniel, however unlikely that may be. I'm so glad Hortense showed up to be a victim today. It's so rare to see actual servants in the house anymore. It reminds me of the good old future days gone by at Collinwood. 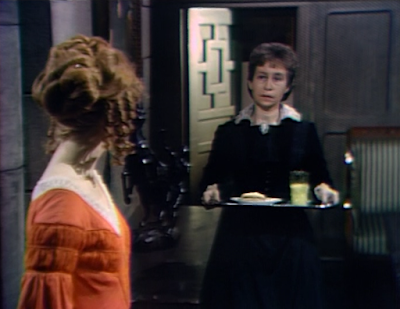 John: Why, it's the old headless-body-covered-by-branches trick! I've been wondering what headless Zachery's corpse has been up to these past few days. Now we know he's just been playing possum. And to what end, you ask? Good question. Once again I think our writers have long since abandoned any sense of logic. 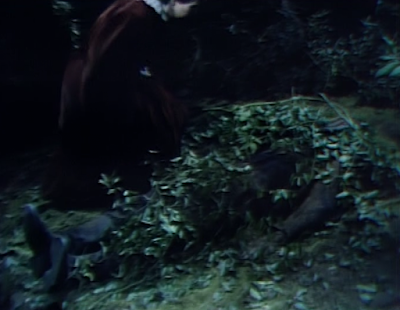 Christine: It's the Bedford atrocities all over again! His purpose is to take heads because he's looking for the one that he's missing! What a clever Headless Man to devise a way to conceal himself so he could spring on an unsuspecting victim, and all without the benefit of a brain to come up with it! What will this cranium impaired fellow unthink up next? Incidentally, after 4 years of viewing, it was quite revealing to see up close what's been hanging over the heads of the Collins family in the foyer. 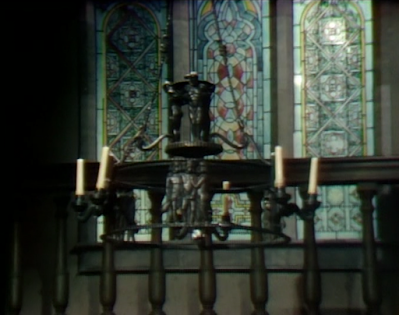 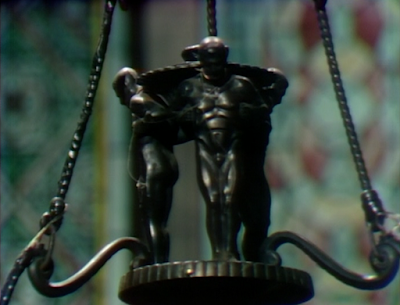