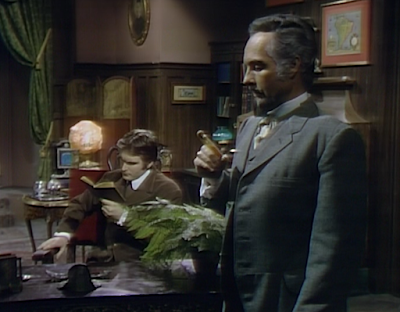 Evan picks up the vial of Nightshade that Tim bought from Magda and examines it. He then invites Tim to play cards. He says he'll soon see his favorite lady—the Queen of Spades. He says he learned to play at Collinwood, where Judith is very fond of cards. Tim mentions that Charity and Mrs. Trask play cards, but Trask himself does not approve. Evan says Trask sees the Devil everywhere. He adds that Edward plays, too, but he cheats. As they play, Evan asks Tim to bring him a brandy soon. He adds that when the time comes, it may not be brandy. Evan lays down the Queen of Spades. Tim gets up and pours the Nighshade into a glass. He brings the glass back to Evan, who tells Tim that he did very good. Tim then tells Evan that he is to drink the brandy. Evan is shocked to hear Tim say this, suggesting that he's not under Evan's control. Tim grabs him and forces the brandy towards his lips. Evan struggles as Tim tells him that he's going to drink it. 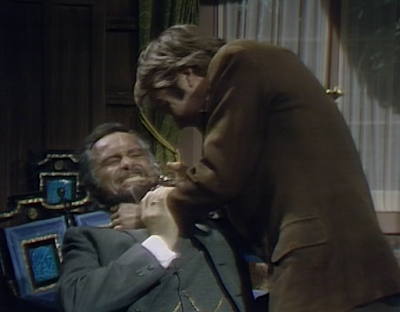 Evan pushes him away, but Tim comes back and attempts to strangle him. Evan tells him the face is in the cards. Tim lets go of him, and Evan tells him that he takes orders from him, and demands that he get back to work. Tim does, and the phone rings. 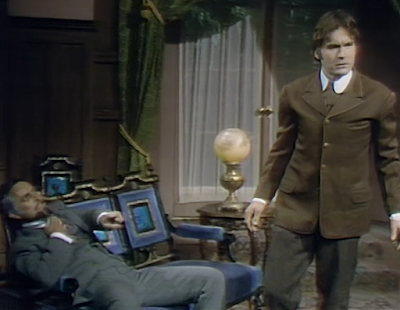 Beth speaks to Evan on the phone. She asks if he's seen the moon, and tells him that it has happened again. He explains that there's nothing he can do about Quentin. She tells him he can bring something silver. She says if this keeps on, Quentin will be caught. Judith comes downstairs and asks what's wrong. Beth says it was nothing, and asks if she can extend her stay at Collinwood. She says that Jenny's boy has a fever. She has medicine for him. Judith says she's going to tell Quentin about the children, and Beth tries to dissuade her. Judith points out that Beth always wanted her to tell Quentin. 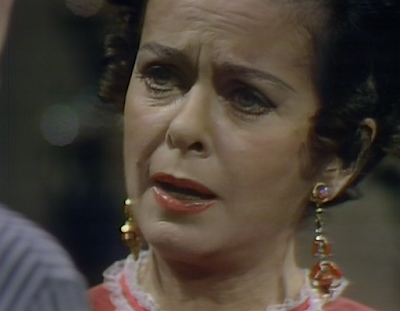 Beth says that she mustn't tell him. Judith asks if Quentin is home, and Beth says he's with Evan. She asks Judith not to tell Quentin while the boy is sick. Beth says she has an errand in the village, and then will be with the children. She leaves, and outside hears the howl of a wolf. 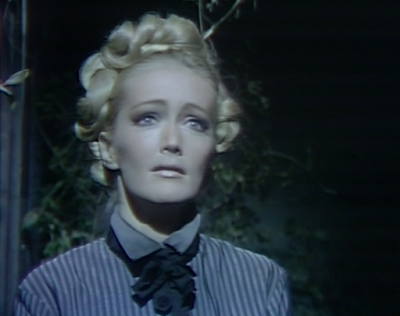 Judith is playing cards when Barnabas arrives at Collinwood. He asks her if she heard the howling. She says it sounds like a dog. Barnabas reminds her of the teacher that was killed a month ago, and Judith says the animal that attacked her is back. Barnabas says that he thinks so. He says that Magda said she thought she saw it in the woods. Judith goes to call the police, and Barnabas asks her why the animal is always spotted on the grounds. She says she doesn't know. 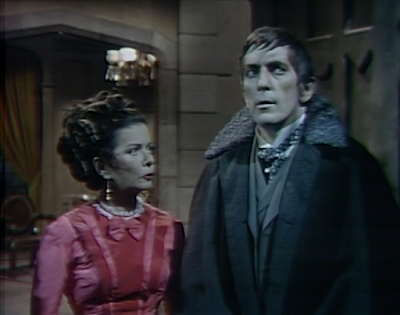 There's a phone call for Barnabas—it's Ezra Braithwaite. He's calling to let him know that a pentagram charm was ordered by Beth Chavez; charged to Quentin Collins. Barnabas thanks him, and tells him that he will be a great addition to his father's firm. He hangs up, realizing that Beth knows Quentin is a werewolf. He wonders if it's the one found in the grave he and Chris opened in the future. Judith returns, and Barnabas asks her when Beth left. She says she left an hour ago. Barnabas asks how long she's been with the family, and if she's from around Collinsport. Judith says she's been with them for about two years. Barnabas looks out at the moon, and grabs his silver cane. He starts to go out, and Judith tries to stop him. He assures her that he is well armed. 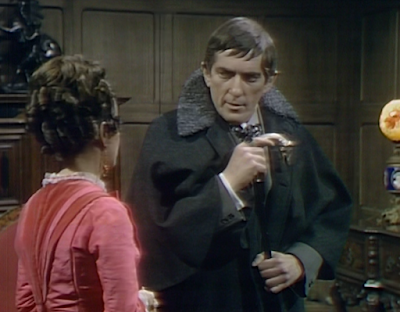 Tim is almost finished with the book. Evan says he's done well, and invites him to sit down and play cards again. Evan deals and Tim picks up his hand. They begin laying down cards. Evan asks what a spade means to Tim, and he says death. Evan asked if he had any desire to kill anyone when he played a spade, and Tim says it was not the right card. Evan plays the Queen of Spades, and asks if that's the right card. Tim gets up, pours some Nightshade in a cup of brandy and brings it to Evan. Evan tells him that he may sit down, and Tim does. Evan tells him that he has done well, and the moment is very near. 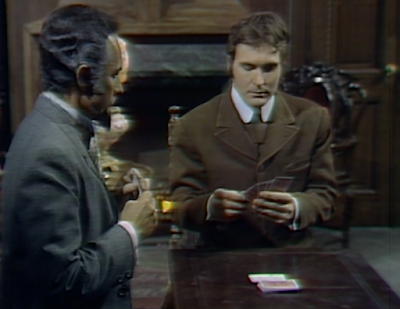 Beth returns to Collinwood, and Judith asks if she saw the police outside. She says the escorted her to the house from the gate. There's a knock at the door, and Beth lets Tim in. He explains that the Reverend sent him to get the children. Judith says she can't let them travel under the circumstances, and sends Beth upstairs to prepare a room for him. Judith sits down and resumes her card game. Just as she's about to play the Queen of Spades, they hear gunshots outside. They go outside to investigate, and Beth joins them. Barnabas comes to the door and says they shot the animal but he got away. He leaves to rejoin the search. 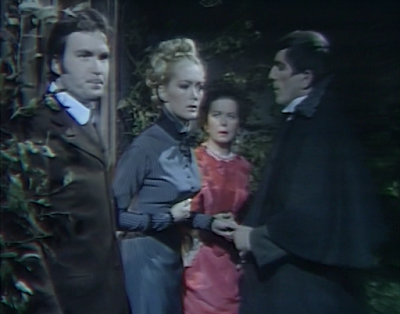 Outside of Beth's window, a bat flaps. Beth comes into her room and finds Barnabas standing there. She asks how he could get into her room before her. He says that isn't important. He points out that she ordered a silver pentagram in the village, and she knows the animal is a werewolf that will change back to a human being in the morning. He asks her who it is. She says she knows nothing about the animal, and asks her to leave. He approaches her, and she asks him to leave. He bares his fangs, and as she asks what he is, he leans in to bite her neck. 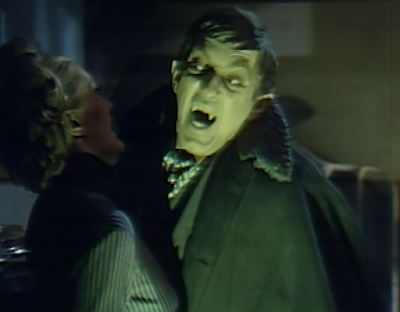 John: It's young Ezra Braithwaite! He wasn't quite what I expected for the boy that would grow into Abe Vigoda—and let's be frank - how cool would it have been had Abe played him in this time period as well? Once again, kudos to the writers for delivering this pay-off scene to the setup we already experienced in the future.

Christine: I enjoyed that as well. I was surprised to see Beth heading out into the woods, knowing that Quentin was out wolfing around. I wonder how she was able to get Braithwaite to make a pentagram on Quentin's account. They're not married and she has no authority to spend Quentin's money. 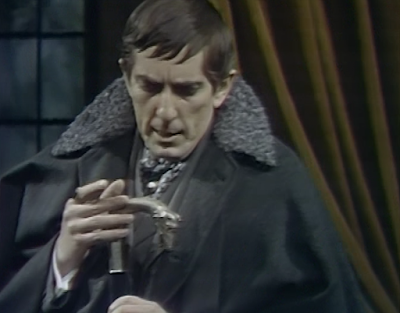 John: What exactly is Evan praising Tim for doing with the book. Reading? Again, as far as we can tell, he hasn't done anything that could be considering translating the text. And speaking of Tim, I'm not really clear why he needs somnambulist training from Evan, but it apparently took after his near fatal error. Evan might want to consider dry-running without real Nightshade next time...

Christine: It could be that whatever potion Evan has treated the pages with makes Tim not care whether or not he's on a fool's errand. I also don't understand why Evan is having him practice lacing a drink, though he should probably train him in better concealment. With all the practice Tim requires, he is going to run out of Nightshade pretty soon.

John: I guess if Beth is the resident monster wrangler at Collinwood, it's only fair that she gets to know the family vampire as well. But I can't for the life of me understand how it is Barnabas can't seem to put the puzzle pieces together to identify the werewolf on his own.

Christine: I think it was just an excuse to taste another pretty, young lady. You'd think Evan might have chosen a signal that Tim wouldn't receive inadvertently. How much longer before Judith throws down the card that earns her Tim's special Nightshade cocktail. 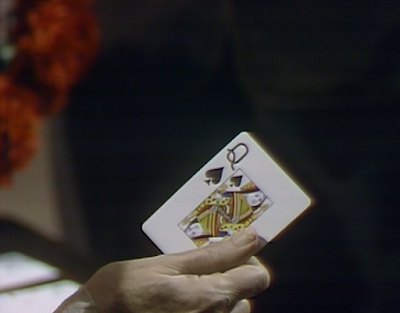 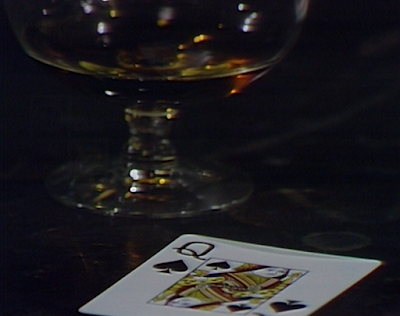