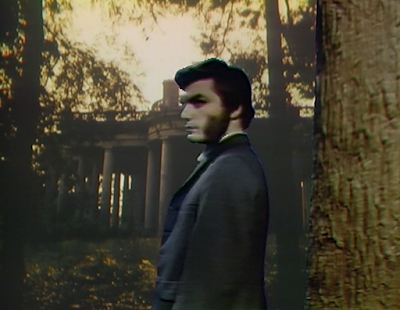 Quentin arrives at the old house and sees the note Barnabas wrote to Magda. It describes a woman upstairs in Josette's room. 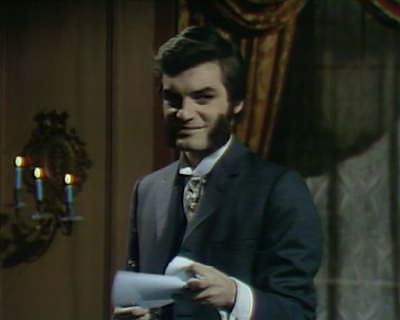 Jenny looks into a hand mirror, telling herself that Quentin loves her.

Quentin approaches the upstairs bedroom. He knocks on the door. Jenny asks if it's Quentin. He says that it is. She says she was beginning to worry. Outside the door, he raises the gun and tells her she'll never have to worry again. He tries different keys to unlock the door when he hears a noise. He tells Jenny to be quiet and hides in the shadows. He steps out with a gun to find Beth there. She asks him if he wants her to wake Barnabas, because she will. They leave the hall. 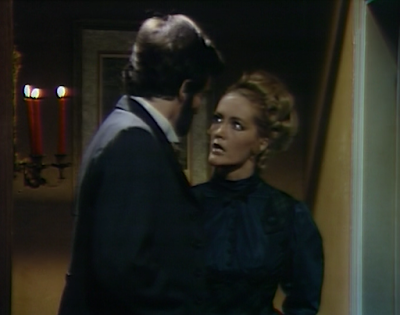 Jenny wonders if Quentin left because she wasn't pretty enough. 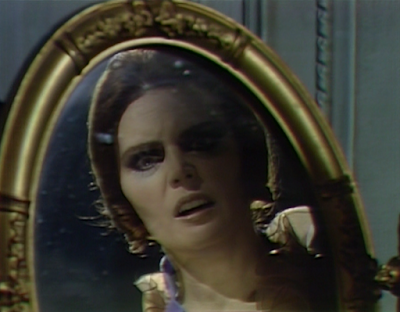 Beth tells him to give her the gun. He explains that he's doing this for Beth, and he tells her to return to Collinwood. She says that would make her an accomplice to murder. He tells her that she'll forget that when they're married. She asks how he'd get away with shooting her—just because he's a Collins? She tells him if he kills Jenny, he'll have to kill her, too. Beth asks how he could plan to kill her. He says that she tried to kill him. She tells him that she doesn't want to see him hanged. He puts the gun down. She tells him to wake Barnabas. He says he should ask why Barnabas locked her up. He says he doesn't know where Barnabas sleeps, and Beth tells him that he'll find him. 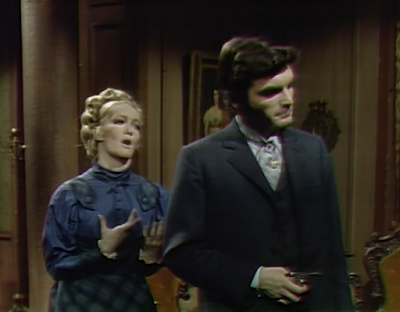 Magda returns to the old house and is surprised to find Beth. She asks what she's doing, and she tells her she came with Quentin. She says that he's gone upstairs to wake Barnabas. She tries to sneakily pick up Jenny's locket. Magda sees her and asks what she took. Beth tries to hide it but Magda is able to get it from her and recognizes whose it is. She asks her where she got it, and Beth tells her she got it there. Quentin comes in and says that Beth will tell her nothing. He asks where Barnabas is. Magda says he left suddenly. Quentin says they'll wait. Magda says he won't be back until dusk. 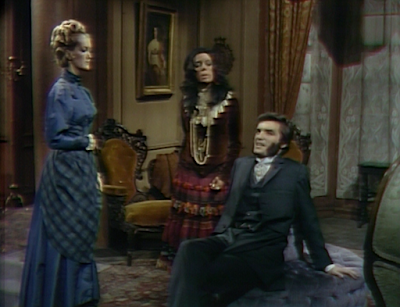 Jenny wonders if Quentin will be back for her.

Sandor returns, and Magda shows him Jenny's locket, explaining it was in the house. He says it's impossible. Sandor says that she is far, far away, and Magda disagrees, saying that it's a sign. 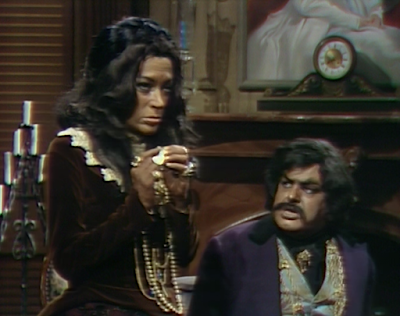 Jenny hears something and calls to Quentin. She thinks that Barnabas must have done something to Quentin, and then she screams that Quentin is dead. 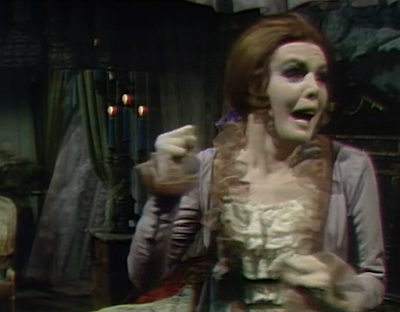 Magda hears Jenny upstairs, and she and Sandor rush upstairs. They call to Jenny. Sandor finds the keys on the ground and they open the door. They are thrilled to see her, and Jenny says she never wanted to see them again. Sandor says they haven't seen her in years. Jenny is confused. She says that she and Quentin are married. Jenny calls Magda a gypsy, and Magda tells her that she is a gypsy, too. She tells them to go back where they came from. Magda asks if she remembers anything. 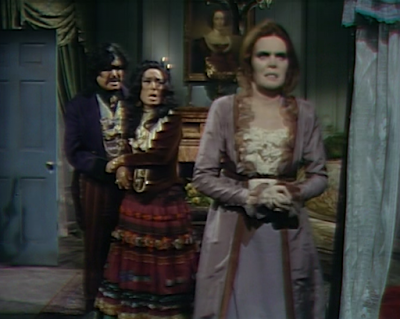 Jenny says Quentin loves her so much he locked her in the room so no one can see her, because he's jealous. Magda says she has the devil in her, and sends Sandor to get the cross. Magda calls her sister, and Jenny realizes they are related. She cries on Magda's shoulder. Magda asks her why she ran away. 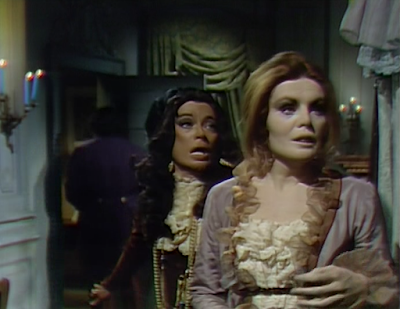 Jenny says she was in her room, and Magda realizes that she has been locked away for years. She says they will run away together. Magda turns to call Sandor, and Jenny takes a large book and knocks her out with it. She leaves through the open door. Sandor returns to find Magda unconscious. 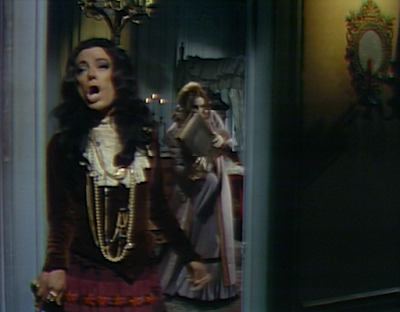 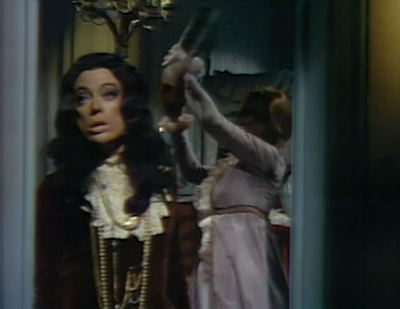 Downstairs, Jenny searches for Quentin. She asks where he's hiding. She finds her way to the basement door and goes downstairs.

Jenny finds the coffin in the basement, and assumes it's Quentin's. She lifts the lid. 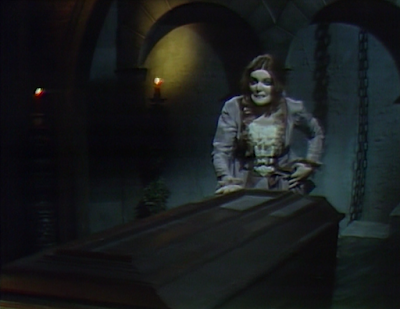 John: So this Beth/Quentin thing just might be serious after all. He was willing to kill for her, and then ultimately not to kill for her. It's comforting to know that they end up together in the happily ever afterlife...

Christine: Considering that both appear to be unhappy ghosts, that may be of little comfort. Beth is quite the loyal servant to beg her lover not to kill his wife. What a peach!

John: Finally, the answer to why the gypsies have been so welcomed at Collinwood. I wonder if we'll ever hear the story of what brought them there in the first place. Could they have returned with Quentin, after one of his many world-travels?

John: I was sure Quentin was going to find Barnabas in his coffin in this episode. I guess that revelation will have to wait. We'll see how Jenny handles things. Fortunately for her, Magda and Sandor are already in on it. But again, can I suggest that a few locks (other than on Josette's door) would come in handy?

Christine: I know she's off her nut, but going from wanting to kill Quentin to pining after him again just didn't make a whole lot of sense. Also, she missed hitting Magda by a mile with what appeared to be one of the Collins Family History books. I guess the weight of the tome disturbing the air around her was enough to knock her out. 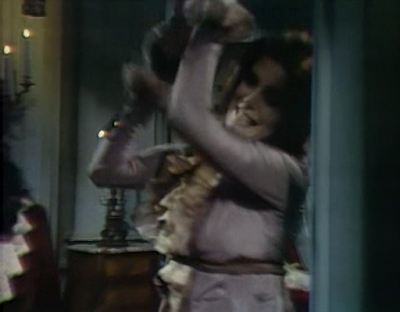