Beth screams as Quentin has changed into a werewolf. She heads for the door but it cuts her off. She hops into the center of the pentagram on the floor, and appears to be protected from the werewolf. He eventually leaves (and walks right past the crew member taking his break in the hall). He's no sooner gone than Beth leaves the safety of the pentagram to go sit in a chair. 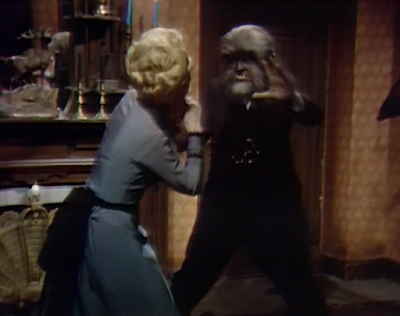 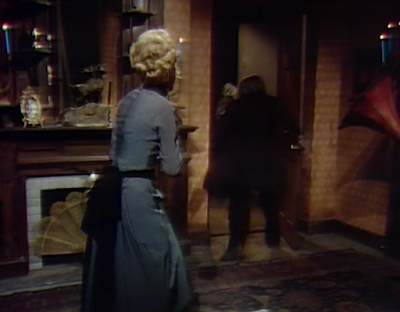 Jamison is trapped in a closet in Trask's school, and can't get out. 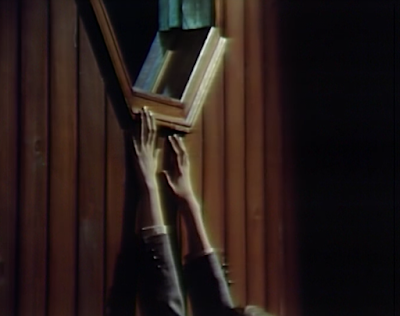 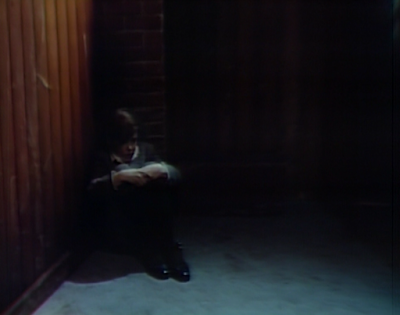 Charity comes to see Tim, saying she expected to see him at Dorcas' service. He tells her that he had gone for a walk in the woods. She says the animal that attacked Dorcas might still be in the woods. She tells him she sees her death as a warning that none of them can escape her father, and that they're all doomed. Tim tells her there's no monster lurking out there, planning to kill them one by one. Tim says he has some papers to mark up. Charity says she's going upstairs to ensure the children are in bed. Once she's gone, Tim bolts the door. 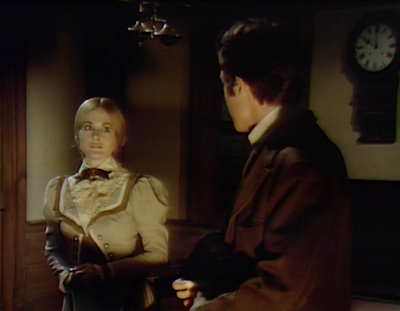 Tim sneaks in to see Jamison, and says they have to be quiet, or they'll be in trouble. Jamison asks if he's come to let him out, and Tim says that he hasn't, but he did bring him food. Jamison eats it. Tim then goes to leave him, and Jamison asks when his punishment will be over. He says Trask accused him of cheating, but he didn't. He asks Tim what Trask is going to do to him. Tim says Trask requires obedience, and Jamison has proven to be independent. Jamison says he's going to escape, and Tim tells him to be careful. Charity knocks on the door to Tim's class. He leaves Jamison in the closet and answers the door. She accuses him of lying to her. She goes to the closet, and asks if he was in there giving comfort to Jamison. He denies it. She goes in to check on Jamison. 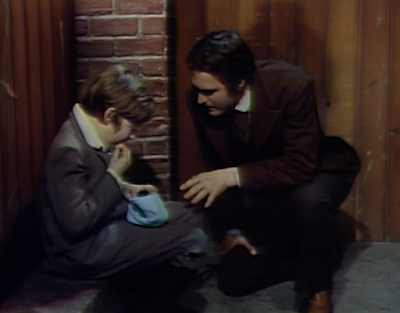 Charity asks Jamison if Tim came in to see him. He denies it. She asks what he's hiding in his shirt. Tim comes in and tells him to show her. He shows her the food Tim brought him. Tim admits bringing it to him. Charity says Jamison requires discipline. She brings him a huge volume and tells him to browse it, and hopefully he'll learn from it. She and Tim leave. Jamison stacks a book on a wooden block, and is able to climb up and out an opening in the closet. 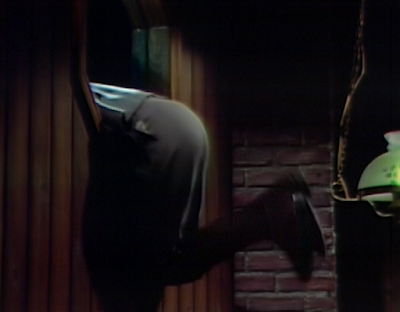 Tim tells Charity she doesn't have to tell her father, and she says she can't lie to him. They hear a noise in the closet, and when they go in Jamison is gone. Tim is impressed that he used the book she gave him to escape. Charity is worried that her father won't forgive her. Tim says he'll go to find him, and she stops him. She says the only place he'll go is Collinwood, and that's where they'll go to get him.

Jamison makes his way through the woods. He hears something and hides. The werewolf appears, having ditched his jacket somewhere.

Charity phones Beth and tells her that Jamison has run away, and is likely on his way to Collinwood. Beth asks if he left alone, or with someone. Charity says he was alone, and Beth is concerned about his safety.

Jamison arrives at Collinwood when Beth comes out to find him. He says she has to hide him. He heard someone following him. He asks for Quentin. There's a knock at the door, and Beth tells him to stay in the drawing room and close the door. She promises not to tell them he's there. She opens the door, and Charity demands that Beth turn over Jamison. Beth says she hasn't seen him. Se asks if Edward is there, and Beth says he's at the old house, and there's no phone there. 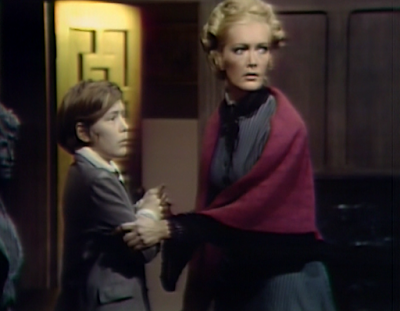 Charity says she'll wait in the drawing room, and tries to get past Beth to get in. Beth steps aside and Charity enters. Jamison is not there. She asks to search the house, and Beth says she'll have to ask Edward. Charity searches behind the drapes, and assumes Jamison snuck out the window. Beth tells her that she's incorrect. Tim tells Charity that they should go and call the police. He reminds her that if her father returns and she's not in the school, she'll be in trouble. Charity apologizes for troubling Beth, and leaves. Tim thanks Beth, and follows after her. Once they're gone, Beth goes to the window and calls to Jamison, but he's nowhere to be found. 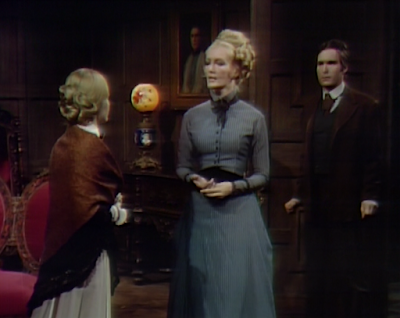 The werewolf lurks outside of Collinwood.

Beth searches the woods for Jamison with a drawn pistol. She hears a noise, but doesn't see the werewolf perched on a rock. It growls, and she points the gun at it. 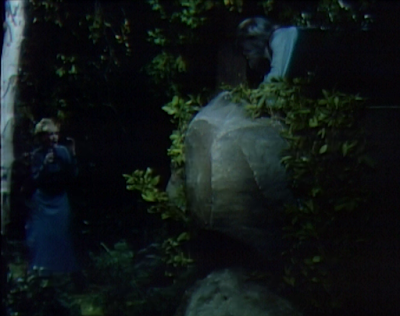 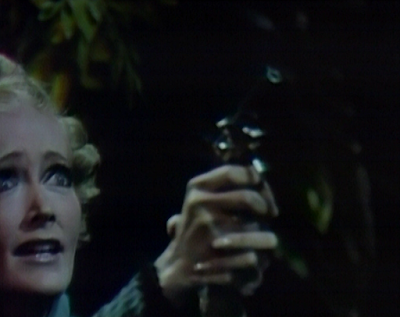 John: Oh, where to begin. Quentin may be the first werewolf to shrink in stature AND change into another outfit during his transformation... and then do a werewolf striptease throughout the duration of the episode.

Christine: I had assumed his clothes were torn from transforming into a larger animal, but now it seems that the damage to his clothing may be caused by his attempts to remove it.

John: I did enjoy the werewolf miming his way around the pentagram. Or was that a Fred Sanford on his way to Elizabeth routine? Do you think that it's as easy as drawing chalk on a carpet? You'd think folks would spread that around as a valuable tip in werewolf country. 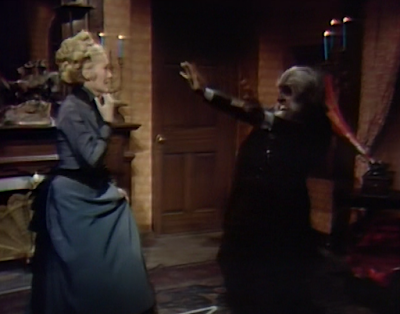 Christine: I'd expect pentagrams to start cropping up all over the house.

John: Charity was acting all tough in her father's absence, but fortunately Tim seems to be able to play her like a fiddle. I liked his casual thank you to Beth as they were leaving Collinwood, as if he knew she was helping the boy out.

Christine: Trask certainly has a very large book of 'meditations'. I suspect it's filled with many depictions of his favorite punishments.

Charity tried to top her father by dropping the Dorcas name a number of times in just a few lines of dialogue. Honestly, has any minor character ever been acknowledged so much in the entire series??? Dorcas! Dorcas! Dorcas!