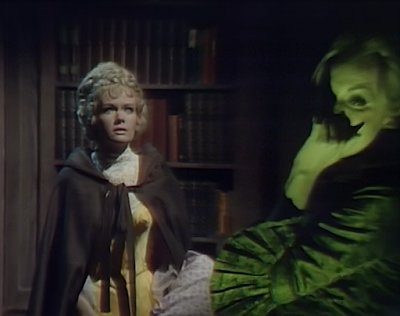 Laura goes into Jamison's room. She approaches the bed and tells him to wake up. She pulls back the covers and finds pillows. In the opposite corner of the room, Angelique laughs. Laura can't believe it. She says she created the fire that destroyed her. Angelique says she created the fire, but she didn't destroy her. She destroyed her doppelgänger. Angelique tells Laura her strength is running out, and she doesn't have much time left. She says she can do what she came here to do. Angelique offers her advice, suggesting she be more cautious in choosing her enemies in the future. 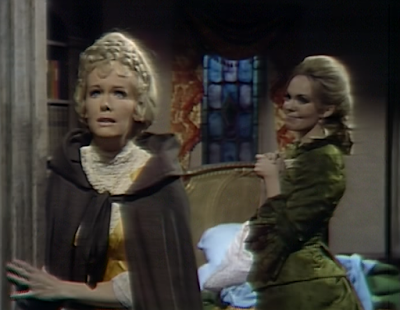 Barnabas is in the drawing room when Edward comes in. He asks if Laura has come downstairs yet. Barnabas says no, and asks about the children. Edward assures him that they are well hidden. He's not surprised that she would try to take the children away, but doesn't believe Barnabas' claims that she has supernatural powers. Barnabas says that she is desperate, and will do whatever possible to communicate with the children. He says there must be no open flames in the house that evening. Edward relents, and tells him to do whatever he wants. 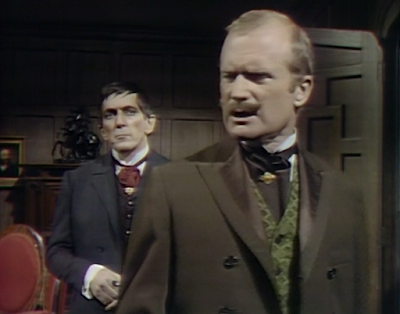 Laura comes downstairs and asks to speak to Edward. He tells her they have nothing to say to one another. She says they do once his cousin leaves the room. Barnabas leaves them, and she says she will soon be gone, but she would like to say goodbye to the children before she goes. He refuses. She says she just wants to see them, but he is adamant. She collapses to the floor. Edward calls Barnabas, and says they must call a doctor. He tells Edward that by the time a doctor arrives, she'll be dead. 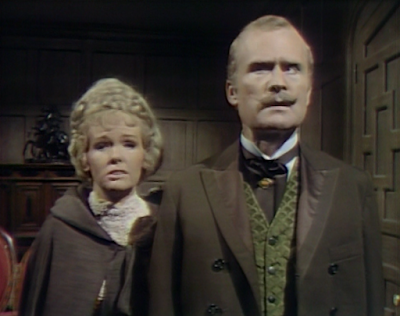 Laura lies in bed, begging Ra to restore her. Edward leans over her and she mumbles about destroying Barnabas. She realizes she's in Jamison's room, and asks if he's there. He tells her to lie still and be quiet. She says she is weak, and couldn't harm the children. She says she's cold. He offers to get her a blanket, and she asks him to light a fire. He says he cannot, as Barnabas asked him not to. She asks if Barnabas is the master of the house. He offers her a blanket, and she says she doesn't want one. She asks if he realizes that she's dying, and that he's refusing her last wish. She says it's the last thing he'll have to do for her. She begs for just a little fire. 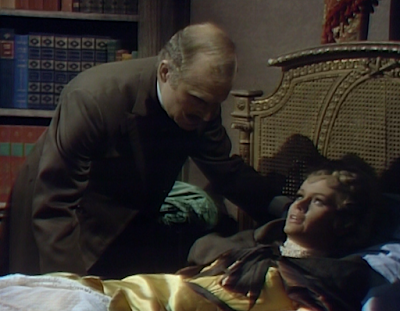 Nora asks Jamison why he keeps trying to get through the locked door. She says their father said they were to stay put and not ask any questions. Jamison asks if she'd like to find out their mother left without saying goodbye. He tells her that if their mother goes away, they'll be sent back to Trask's school. 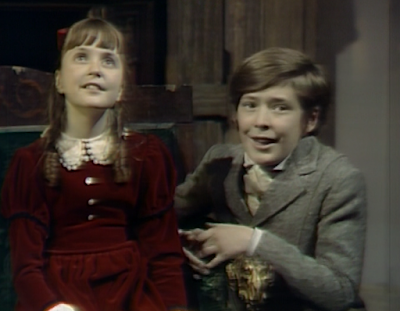 Edward fixes a fire for Laura. She thanks him. She says she'd like to be able to look at the fire, and asks him to help her sit up. She says there's nothing else he can do for her. She crawls to the end of the bed and stares into the fire. She mentally calls to Jamison. 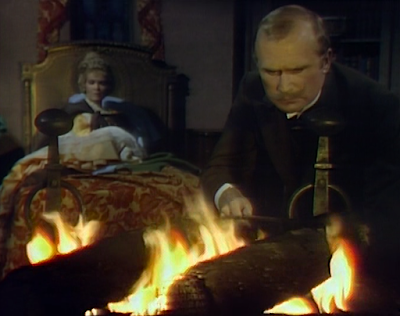 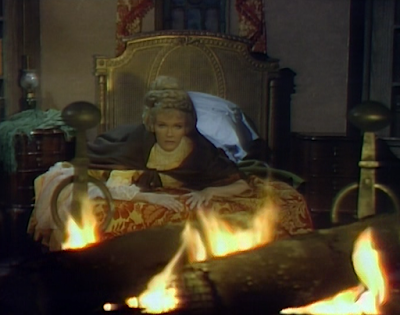 Jamison senses something. He calls out that they're in a locked room in the East Wing. He tells Nora that their mother knows where they are, and will get them out of there.

Laura gets out of bed. Edward asks what she's doing. She says once he lit the fire, she was in control of it. He realizes that he should have listened to Barnabas. He opens the door and calls for Barnabas to come to Jamison's room. Laura tells him that it's too late—she's found the strength she needs, she has found her children, and there's nothing he can do to stop her. She disappears. 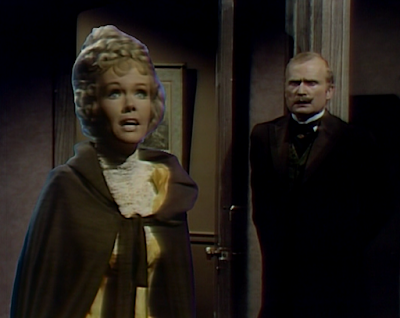 A fire ignites in the fireplace in the room with Jamison and Nora. Nora says she's coming for them.

Barnabas and Angelique arrive at Jamison's room. He asks Edward how the fire was started. Edward says Laura disappeared, and is going to the children. Barnabas says they must go to them, and he tells Angelique he will need her powers to stop Laura. 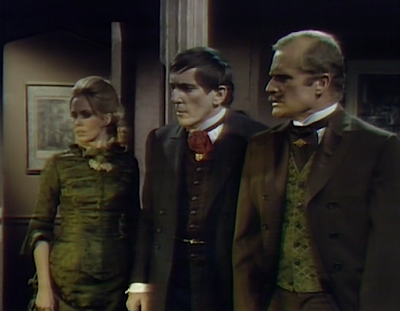 Angelique calls to Laura. She says that when she appears to her children, they will not recognize her.

Nora says the flames are getting closer, and Jamison says there's no way out. Nora calls for her mother to save them. Laura says she's coming to them. 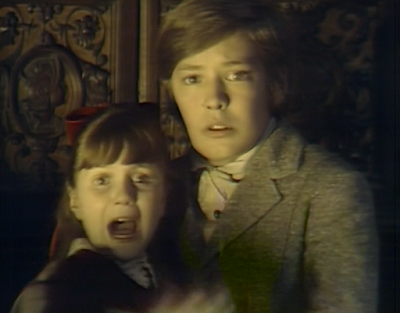 Angelique tells Laura that her enemy is time, and she will appear as she really is.

Laura asks if her children can see her. Jamison says they can only hear her. They see a woman, and tell her to stay away as she's not their mother. She begs them to come away with her, but they see her as an old woman. Laura screams at the realization, and is consumed by flames. 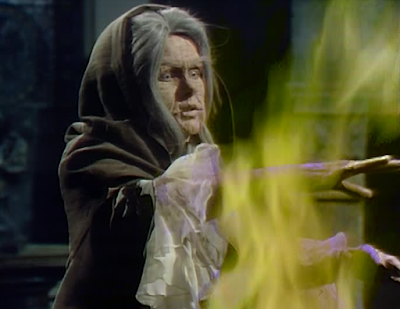 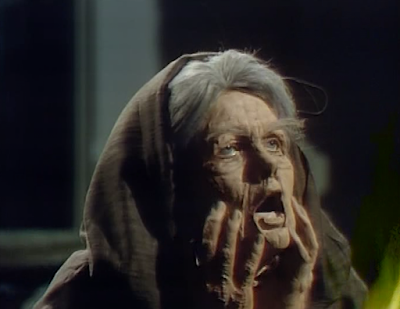 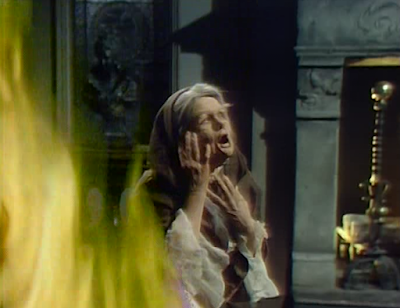 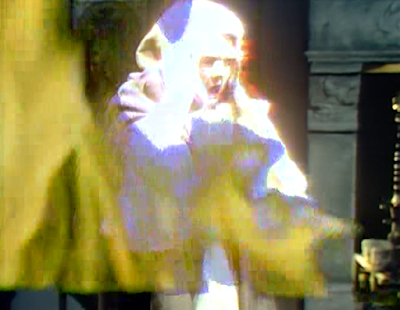 John: Really? The writers want us to believe that Angelique conjured up a doppleganger? That's almost as bad as explaining her death by saying, "it was all a bad dream."

Christine: It's Angelique. She can conjure anything she wants. At least they set us up with some evidence for what she was doing rather than just pull it out of nowhere. She asked Quentin to get her a mirror, and then seemed to be in two places at once, so it wasn't totally unexpected. It was rather funny that she did the same thing to Laura that Barnabas had Sam Evans do to her.

John: I was sure that before she was gone, Laura would get a chance to rat out Barnabas to someone, and it looked like it might be Edward in this episode. We'll see if his demeanor changes now that he's witnessed firsthand Laura's supernatural abilities...

Christine: ...or if he'll make the connection with what the kids tell him about an old lady catching on fire in front of them.

John: Blink and you'll miss it, but I had to laugh when the chroma key flames were misaligned as old-age make-up Laura burned. 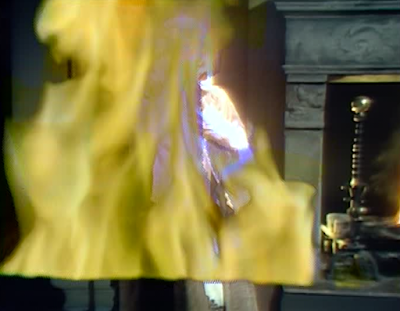 Christine: With the final score at Angelique: 4, Laura: 2, it appears that Angelique has won the duel and vanquished her foe, as predicted. It was a lot of fun seeing Angelique assert her dominance at the beginning of the episode, and I almost wish these two had been able to spar a little bit more, but it seems the town is not big enough for two evil women.
Posted by John Scoleri at 6:00 AM