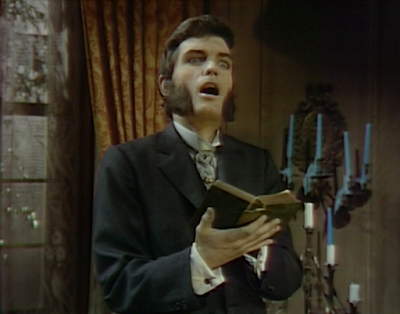 Laura sits by the fire. She suddenly gets up, concerned, and begins searching for the scarab.

Laura prays for protection from the great god Ra, calling for him to send Jamison to thwart Angelique's plan.

Jamison wakes up in the middle of a nightmare. Judith asks him what's wrong. He calls for water, and Judith goes to fetch some. 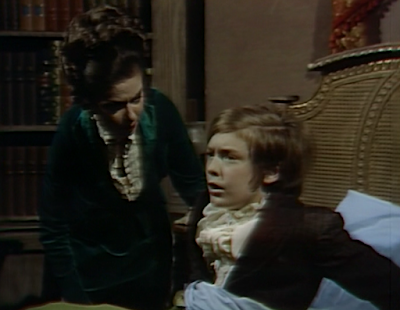 Quentin continues the incantation, and Angelique sees the fire go out in the fireplace. She lights it again, and says Laura is fighting it. She tells Quentin that he must call on Seth, and he tells her he does not want to disturb the God of Death. She reminds him that Laura will know he was responsible for this. Quentin calls for Seth to help rekindle the fire, and the fireplace bursts into flame. He and Angelique kneel before the fireplace and pray. 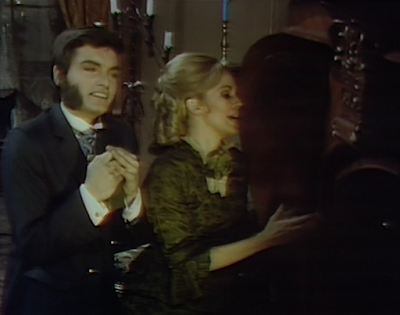 Jamison screams that they're hurting her. The fire goes out. Angelique tells Quentin to get him out of there. Judith comes in and asks what's going on. She tells Jamison he must lie down, and Jamison says that first they must promise. Quentin says Jamison is delirious. Jamison asks them to tell Judith what they were doing. Angelique makes an excuse, and Jamison say there's a doll. He takes Judith to the fireplace, but there's nothing there. 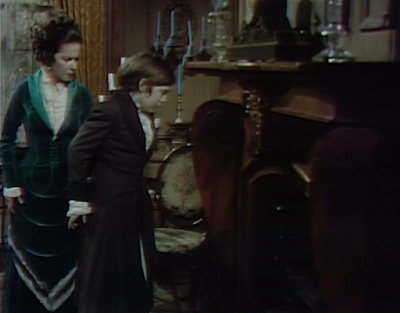 Jamison is lying on a couch, resting. Judith tells Quentin and Angelique that he believes his dreams are real. She says the doctor says that nothing is wrong with him. Angelique asks if she thinks Laura may be responsible. Judith asks Quentin what he thinks. They turn and realize Jamison has left. Judith goes after him. Quentin tells Angelique that Laura knows she has powers. She tells him to get her a full length mirror, and then he can go search for Jamison. 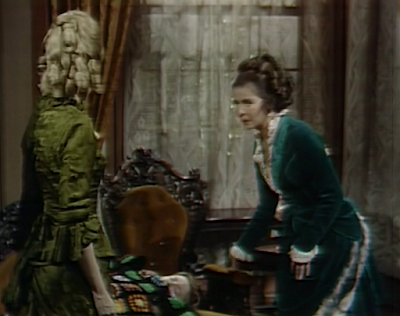 Jamison finds Laura lying on a couch in the cottage. She thanks him, saying that she's fine now. He asks why they hate her. She says it's just Angeique—Quentin just does as he's told. He asks why Angelique hates her, and she says she knows a secret that no one should know. Jamison says he likes secrets, and asks her to tell him. She says it's about Barnabas, and why they never see him during the day. Jamison explains that's because he's always in Bangor. She asks him if he still wants to come with her, and he somewhat reluctantly agrees. 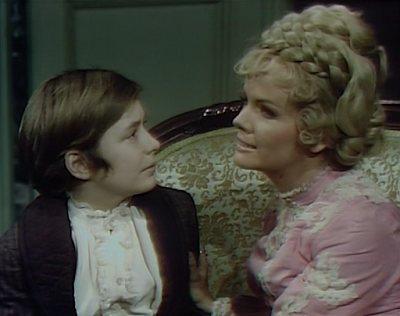 Judith comes downstairs when Quentin returns. She says that if he had come with her, he could have caught Jamison. She says she's ashamed he went behind Barnabas' back, and tells him to leave Angelique alone. Just then, Laura and Jamison arrive at Collinwood. Judith asks why he ran away. Laura sends him upstairs, and tells Judith she's upset that they failed to take care of him. Laura says she has a surprise for Judith. Quentin says he's curious, and Laura says she wants to speak to Judith alone about what's happening at the old house. They go into the drawing room. 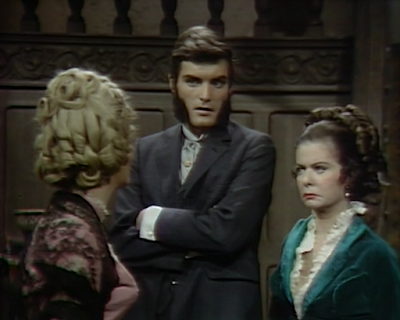 Judith asks her what this is about. Laura says it's about Barnabas. She tells her that after she hears what she has to say, she will take his portrait from the wall and burn it. Angelique comes in, and the two women stare at each other. Laura clutches her throat, and Angelique says she appears to have lost her voice. Laura runs out, and Angelique offers to walk home with her. Judith says it's as if something stopped her from saying something she wanted to stay. Judith goes upstairs to check on Jamison. 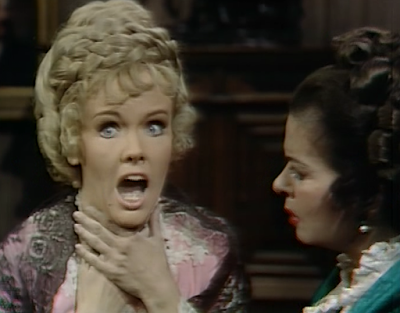 Quentin tells Angelique she's gifted, beautiful and dangerous, and asks why she wants Barnabas and not him. She says she loves Barnabas, not him. She sends him to the old house to wait for her. He asks when she's going to tell him what's going on. She asks if she should make him do it, and he leaves of his own accord. 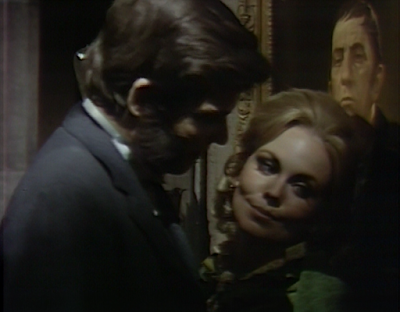 Laura sits by the fireplace, unable to speak. She wonders why Ra has foresaken her.

Quentin arrives at the old house and is shocked to find Angelique there, finishing a card game. He asks why he's there. She says she wanted him with her when it happens.

Laura begs Ra for strength to crush her enemies. 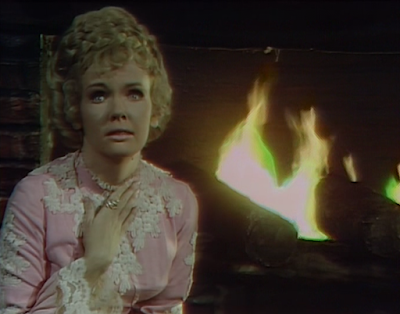 Quentin asks Angelique if they're in danger. He grabs her arm and says it's hot.

Laura begs for Angelique to burn from the inside.

Angelique screams as she burns. 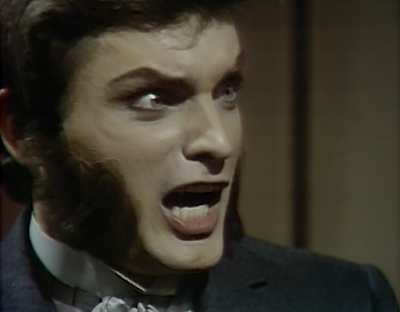 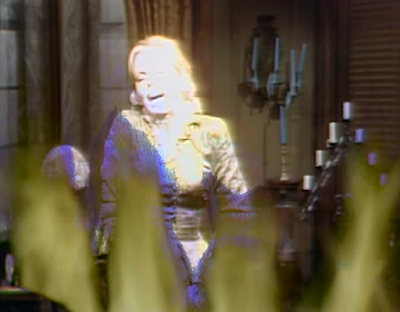 John: This whole back and forth dueling with magical powers is really starting to get silly. They steal the scarab and are able to use it against Laura, but then she calls Jamison to help. Then Angelique drops a mute-bomb on Laura, but she's able to call upon Ra to toast Angelique from the inside-out.

Christine: I can't help thinking of the duel in The Raven, though that sequence made a whole lot more sense than what's going on here. Angelique has survived burning quite a few times, so I expect she'll be hurling more spells Laura's way in no time at all.

John: I'm not surprised that Quentin tried to put the moves on Angelique, but I am somewhat surprised that she rebuffed him... It's not like she hasn't used her charms over men in the past. I guess that's the problem with having Quentin a little too deeply involved with her plans.

Christine: His enthusiastic performance during the ceremony must have been an attempt to impress her. If she could just get over being hung up on Barnabas, she might realize that Quentin is perfectly suited to her. 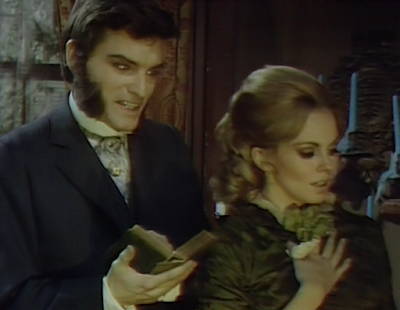 John: I must admit, I wish that Laura had gotten the chance to tell Judith about Barnabas before she lost her voice, just to see what kind of response she would have gotten to such an outlandish claim.

Christine: Judith was so thrown by today's events already that she slipped and referred to Jamison as David before correcting herself. Maggie's afghan made an appearance at the Old House today when Angelique wrapped Jamison up in it. I wonder if it may have magical properties.