Tim reviews a book in Evan's home. He licks his finger as he turns each page. He tells Evan he was always teased about that, and Evan replies that in this case, it's the perfect thing to do. He works his way through the book, reading it, but not writing anything down. After considerable time passes, he collapses in his chair. Evan asks him who he is, and Tim says he doesn't know. Evan tells him that when the time comes, at a given signal, he will kill someone. Tim acknowledges that he will do Evan's bidding, and then Evan reminds him that once he has done his work, he will forget all about it. Evan pulls out a deck of cards and shows Tim the Queen of Spades. He says that when he sees that card, he will know who to kill—A woman who needs to be punished. 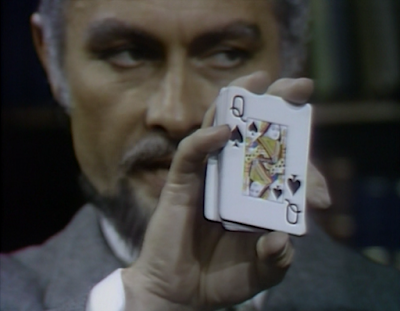 Quentin and Beth are playing cards. He goes to pour himself another drink, and Beth tries to stop him. He tells her not to lecture him. He reminds her that when the moon rises in four hours, the pain will come. He says that when he's caught, the judge and jury won't feel bad that he's the victim of a curse. He realizes that it's all because he killed Jenny. Quentin asks her who she thinks the best uninvited guest at a black mass. He then says Reverend Trask. He tells her that he and Evan will pay. Beth says she'll go to Magda. Quentin says he's already tried that, and she counters that she has not. She storms out on him. 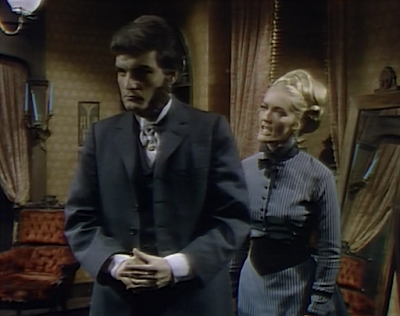 Tim arrives at the old house, telling Magda he wants to buy something from her. He says he's found a formula to turn copper into gold. He says he needs Nightshade, and she replies that it only turns the living into the dead. He offers her $10 for an ounce. She asks who he wants to kill. He raises his offer to $20. She demands 50 gold pieces, and tells him to come back in an hour. He tells her that he'll kill her if she mentions their discussion to anyone. 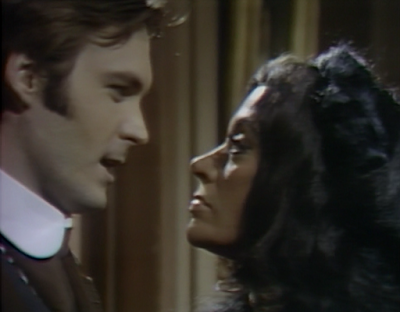 Beth asks Magda what she does care about. She asks if she cares about Sandor. She asks what she would do if Sandor was Quentin, and she says she would wear her pentagram. Magda tells her she'll help her. She says that Quentin is death to anyone who loves him. Beth begs her to remove the curse, but Magda says she can't. She had to avenge her sister. Magda says he will be at the mercy of the moon for the rest of his life. Beth says she's going to spend the rest of her life with Quentin, and they will find a cure. Magda asks if she'd marry Quentin, knowing that the curse will be passed on to his son. Beth says she has cursed her own kin. Magda says Jenny had no children. Beth tells her that Jenny had twins—a boy and a girl—and offers to take her to see them. 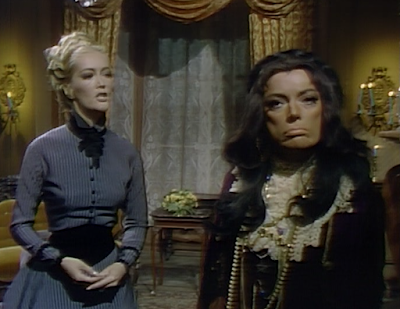 Beth says that Edward and Judith hid the children. Beth makes her promise that she won't tell Quentin, and then says that Jenny knew Laura was trying to steal Quentin. Edward made him leave, and Laura followed him. Edward went to pay Jenny to skip town, and she told him she was pregnant. When the children were born, Edward refused to see them. He denied that Quentin ever existed. Magda realizes that Jenny had a son, and begs for her sister to forgive her. Beth asks if she will help her now. Magda tells her to get a pentagram and put it on the boy, ensuring he wears it for the rest of his life. Beth asks if she can end the curse, and Magda cries as she repeats that she did not know. 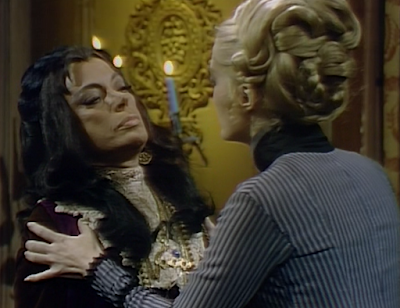 Beth returns to Quentin, and he tells her he doesn't want to hear from her. Beth tells him it's nighttime. He asks if they should pretend the nightmare is over, before contorting in agony. He tells Beth to stay away. He tells her that she has to get out of the house and forget about him. She leaves as he continues to writhe. 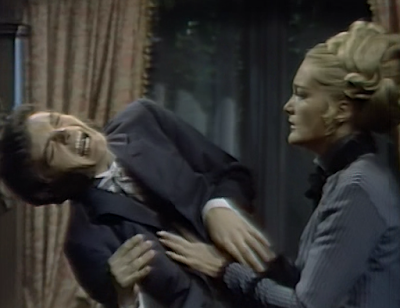 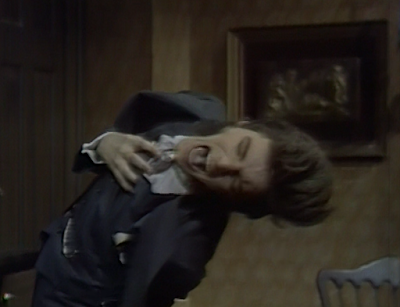 Evan looks out at the moon. He picks up the vial of Nightshade that Tim bought from Magda and examines it. He then sits down with Tim to play cards. He says he learned to play at Collinwood, where Judith is very fond of cards. Tim mentions that Charity and Mrs. Trask play cards, but Trask himself does not approve. As they play, Evan asks Tim to bring him a brandy soon. He adds that when the time comes, it may not be brandy. Evan lays down the Queen of Spades. Tim gets up and pours the Nighshade into a glass. He brings the glass back to Evan, who tells Tim that he did very good. Tim then tells Evan that he is to drink the brandy. Evan is shocked to hear Tim say this, suggesting that he's not under Evan's control. 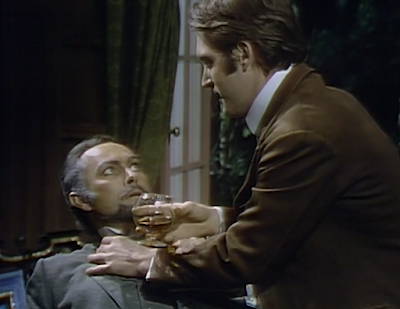 John: So the Collins' Twins are finally out of the bag. Sort of. Unfortunately for Beth, Magda's solution wasn't removing the curse from Quentin; her interest is only in protecting her nephew.

Christine: I was under the impression that she was not able to remove the curse.

John: Funny how Tim plays tough negotiator with Magda, only to have her lay out her non-negotiable demands.

Christine: You'd think Quentin and Beth might take better precautions, knowing that Quentin would be going through the change. It would have been a good idea to have Quentin stay somewhere other than Collinwood.

John: So who do you think is pulling Tim's strings. Is he acting on Trask's behalf, even though he's supposedly under Evan's spell? Did Magda give him some sort of protective antidote when she sold him the Nightshade? Or did Evan just screw up and accidentally show Tim the Queen of Spades prematurely?

Christine: I don't think Trask is behind it. It's possible Magda did some tinkering, though I would be surprised if that were the case. Evan seemed very deliberate in showing the signal card, but I can't imagine why he seemed so pleased when it prompted Tim to start mixing the deadly drink. Did he think he was just practicing for the real deal, or did he expect him to carry it to the woman who is Trask's intended victim?

The description of that Quentin and Beth scene made me wonder for the first time, can drunkenness affect a werewolf's "performance"? Because if Quentin would hit the brandy enough during every full moon, maybe he and everyone else would be safe.

I thought they made it perfectly clear in the previous episode that Trask is indeed pulling the strings here. In exchange for his silence about Evan's "role playing game" he wants Evan to use his black magic on Tim in order to have him do his bidding (which is pretty clearly to eventually dispose of Mrs. Trask). The queen card even resembles Minerva!

Yes, it is clear that Trask is the one who is blackmailing Evan into using black arts to kill off some woman, most likely his wife. When John asked who was pulling the strings, I thought he was asking who was behind Tim trying to kill Evan instead of the intended target. In that case, I don't believe Trask was responsible for him trying to force the doctored drink down Evan's throat.

I'm sure it's an antidote he'd be willing to try!

I do think Trask has many tricks up his sleeves, but I think they're more along the lines of manipulation and blackmail than the black arts themselves!

Something tells me if that would have worked, he'd already know!

Thanks for the clarification, Christine. I must have read that wrong. This Trask is turning out to be even worse than his ancestor. Wonder if he too will end up being bricked-up behind a wall?!?