Charity walks in on Quentin and Petofi, and tells Petofi to leave. He asks her if she's enjoying her stay at Collinwood, or if it's too much for her. Charity is unable to speak. He places his gnarly hand on her throat, telling her he has a healing touch. Quentin asks what he did to her. Petofi tells him to leave them alone. He does. Petofi says she's lovely, and she can thank him for the compliment. She does thank him. He takes her to the window and tells her to look outside, and she will see the future. 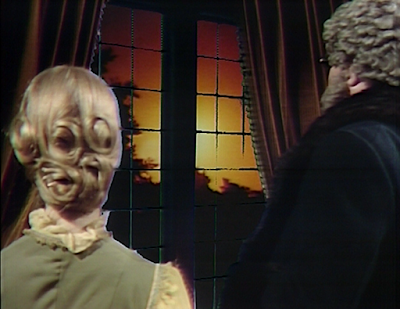 Charity sees herself visit Magda at the old house. She asks Magda to read her cards again. Magda tells her it's best not to do a reading tonight. All arrangements indicate there will be an act of violence nearby. 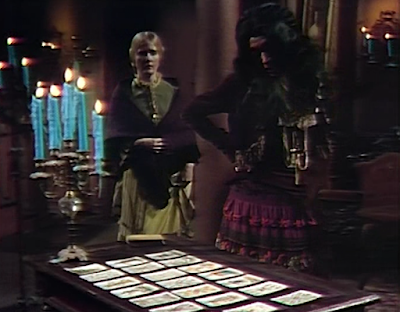 Magda mentions Aristede, who Charity says she doesn't know. Aristede arrives, and Magda asks him where Petofi is. She tells him to warn Petofi. Lightning flashes and the chandelier begins to shake. The front doors are blown open. Aristede goes outside and is locked out of the house. A caped figure approaches him and strangles him. The cloaked man picks up a sword and walks away. 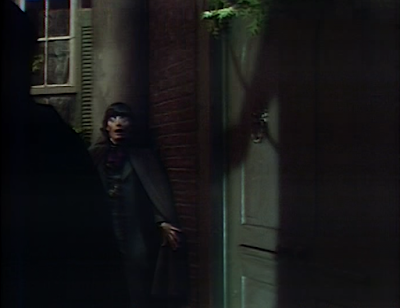 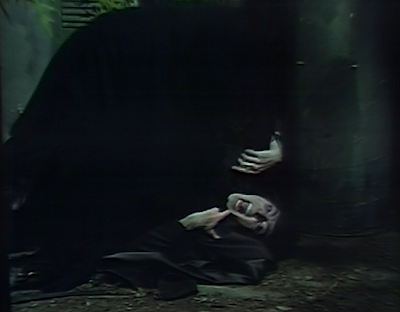 Magda watches him leave. She checks on Aristede, who is dead. 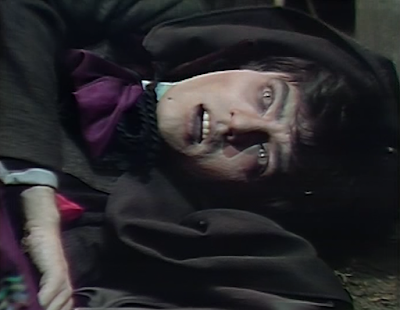 Charity screams that he's dead. Petofi asks who's dead. Charity says a hooded executioner strangled Aristede, and then picked up a scimitar. Petofi brings her back to the window and tells her to describe what she sees as it appears. She describes a graveyard. She says the executioner with the scimitar is walking through the graveyard. She then describes stone walls, and Petofi in the room, held prisoner. She says his hand is strapped to the chair. She says the executioner has arrived, and with his scimitar, he cuts off Petofi's hand. Petofi tells her that he's heard enough. He tells her that she will begin a new life, a life people will not understand, nor be able to change. 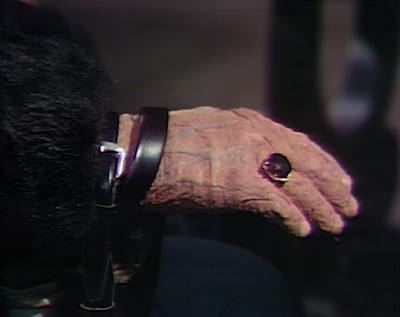 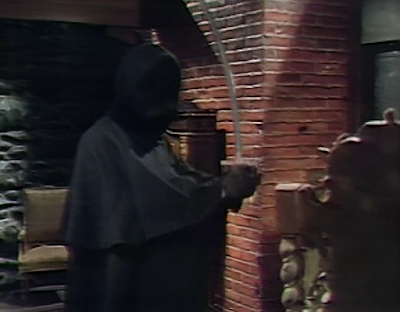 As Petofi leaves, Quentin asks what he did to Charity. Petofi tells him to see for himself, and exits. Quentin goes into the drawing room, but Charity is not there. She comes out from behind the curtain, speaking like Pansy Faye again. He asks if she knows who he is. She says she does. She mentions how he's not like Carl. He asks if she knows what he is, and she doesn't know what he means. She tells him to sit down, but he leaves her. She asks if he wants to watch her act, but he goes upstairs. 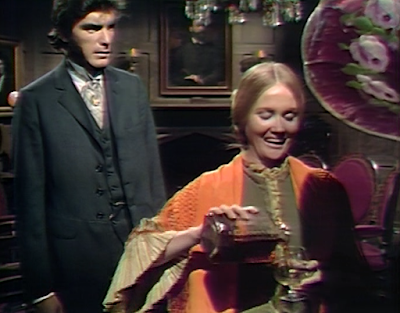 Aristede is with Barnabas' coffin when Petofi returns. He says it's good to see him young and alive. Aristede doesn't undertsand what he means. Petofi tells him that people are coming, but they can't leave Barnabas behind. Petofi says they need to throw their enemies off. Aristede asks about Barnabas, and Petofi tells him they must go, as it's an emergency. 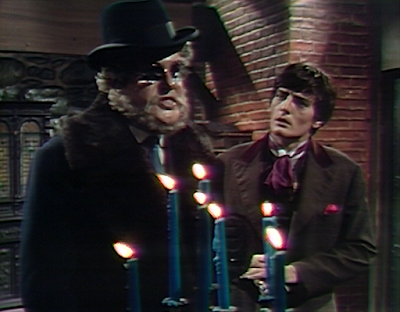 Charity sings Pansy's Hoochie-coochie song. She hears Quentin, and asks where he's going. He picks her up and sets her aside, and then leaves. She continues to sing. 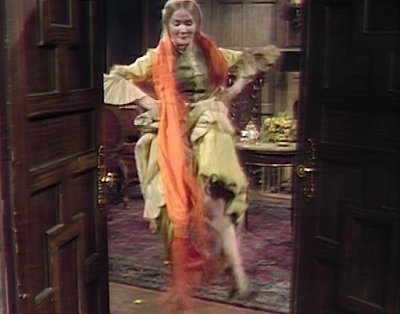 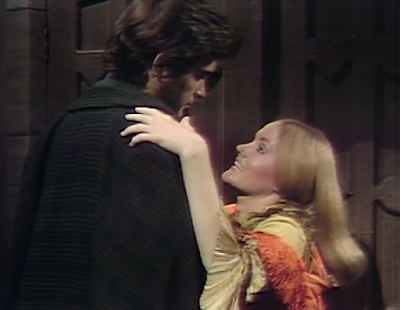 Petofi and Aristede wander through the cemetery, reading names on tombstones. Petofi finds one that he likes, a recent death. He tells Aristede to start digging. 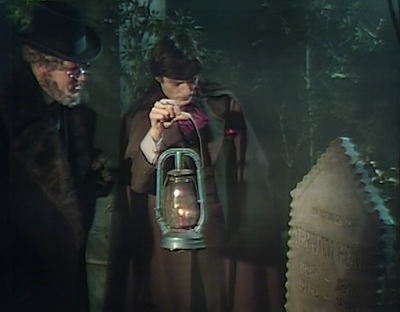 Aristede exhumes the coffin, and Petofi tells him to open it. He does. Petofi is pleased with the state of decomposition. He introduces himself to the dead man, saying they are in urgent need of his services. 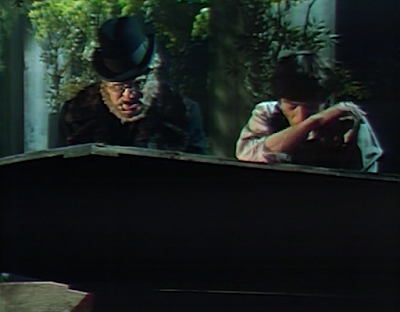 Quentin tells Magda they can rescue Barnabas. She reminds him that he failed the last time. He tells her that the situation has changed. He says when he left Collinwood, he was very frightened. He thinks he may be distracted, allowing them to save Barnabas. He tells her he is going to free Barnabas, and asks if she's with him. She says he can't go alone, so she'll go with him. He sees a face in the window, but Magda says she sees no one. He checks again, and says they're gone. They hear a noise, and open the front door. There's a dagger stuck it with a note. It says betwee life and death, there isn't room for a flea to jump. He asks Magda what it means, and she says that he gypsies have come for Petofi's hand—and for her! 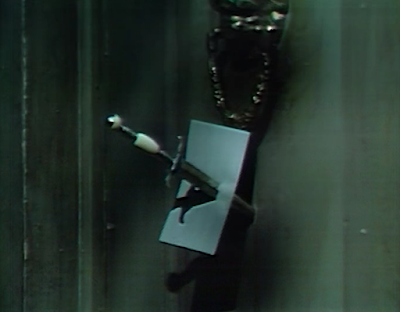 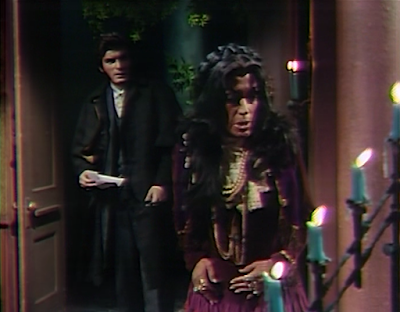 John: So the writers are at it again, making up rules as they go. Apparently Petofi doesn't need his magic box; he can turn any window into his Romper Room view of the future.

Christine: Since when did they stop writing on the go? Unfortunately, it makes the magic cupboard seem less special. On the other hand, it makes me wonder what creative aperture will be our chromakey ticket to the future next? 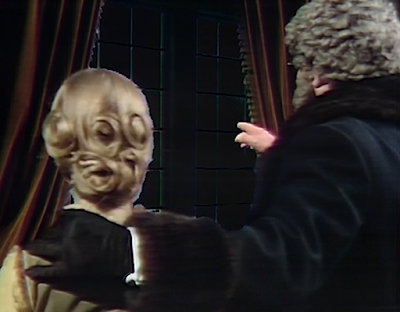 John: Now just waitaminute—now we're back to Petofi not being able to see the vision the others are seeing ? It would be nice if they could get the story straight. I'm sure someone will say he knew with Beth because she actually saw how SHE would die... but the implication there was that he knew she would die and become a vampire, and I don't buy that. Not for one second.

Christine: Well, I wouldn't be the one to say that's why he couldn't see what Charity saw. I would say it's because the mentalist powers of Pansy Faye were still present in Charity, even before he switched her back on, and were responsible for changing the channel on Petofivision. He apparently did not have access to Pansy Faye's transmission signal.

John: I'm not going to complain about the super-fast exhumations, as we've come to expect those in Collinwood. And I'm certainly looking forward to seeing what they have planned for this fresh corpse... but I must admit I'm a little disappointed that we were spared the decomposition that was so pleasing to Petofi!

Christine: I'm disappointed that we didn't get to see Petofi's hand chopped in two again during Charity's vision, with all the bones and veins jutting out of both severed ends, as when Magda chopped it in half. There's a possibility we may be seeing some decomposed doppelgänger in the near future, considering Abe is around the same age that Petofi appears to be. 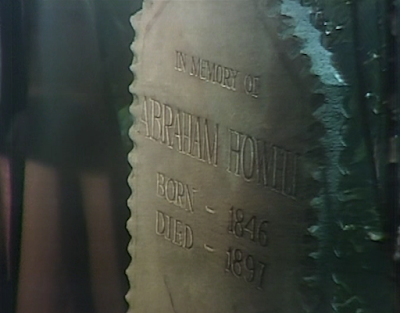 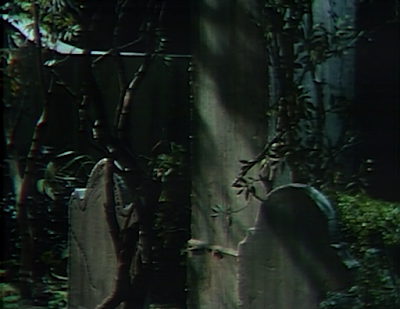 I preferred Nancy Barrett as Charity Trask over Pansy Faye, but I will say this was the least she annoyed me in my times rewatching the series. Charity had all sorts of notes, while Pansy is kind of one note.