King Johnny comes back downstairs, demanding to know who has the Hand. She says she cannot say, and is physically unable. He slaps her across the face, and asks her if she needs more help remembering, and pulls out a knife. She sees the box the Hand was in, which appeared in the room. She tells him it's empty. He open the box, looks inside, and closes it. He tells her to look for herself. She does, and is shocked to see the Hand inside. 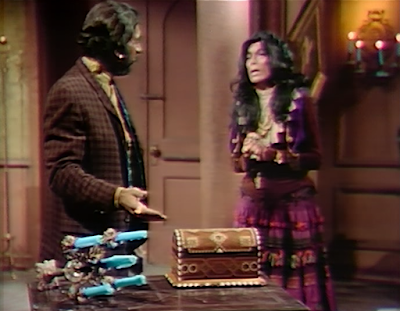 Johnny holds Petofi's hand, and then puts it back in the box. He calls Magda a liar and murderer of her own people. She says that she didn't kill Julianka. She asks what's going to happen to her. He tells her he's taking her back to Boston to the tribe, after giving thanks for finding the Hand. He starts to honor the Hand, and Magda goes to sneak out the front door, only to find another gypsy waiting. 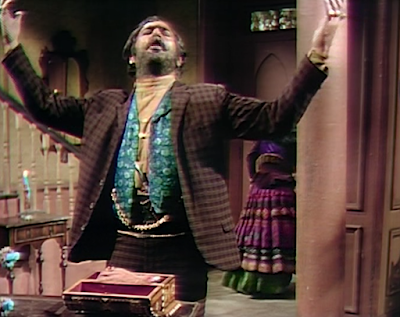 He says she's gong to go on trial, as no gypsy had ever used the Hand on another gypsy before. She asks if she can say goodbye to her dead ones, and Johnny refuses, saying she may be saying hello to them quicker than she thinks. They lead her outside. Aristede comes out of the bushes to see them leading her away. 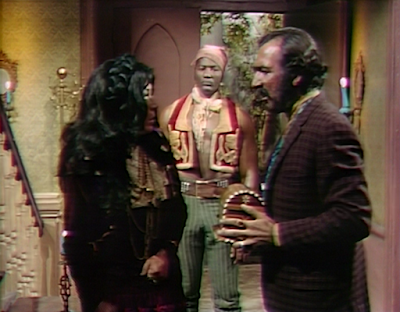 Aristede tells Petofi that all went just as he expected. Petofi says the one thing he fears is that the gypsies will try to use the hand. He praises Tate's work in recreating the hand with the dead one they had exhumed. He tells Aristede to bring him the Collins family history book. He then asks if the gypsies hurt Magda. Aristede says they weren't exactly kind to her. 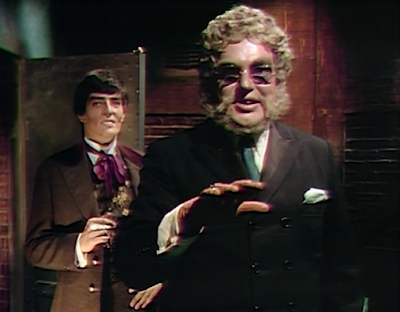 Aristede hears a sound while in the lair, and calls out asking who's there. A wind blows through, knocking things down and blowing out the candles. Aristede says he's not afraid. Petofi comes in, and he says he thinks he knows what it is. He calls for the alien spirit to depart in peace. The wind dies down, and Petofi says it will trouble them no more. He tells Aristede it's the spirit of the dead man whose hand they borrowed. 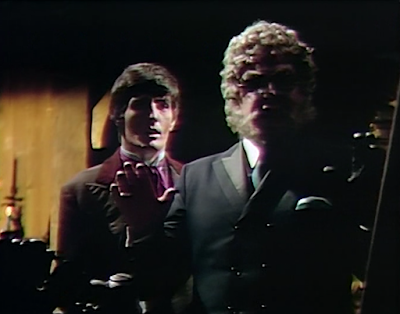 Petofi opens Barnabas' coffin, and removes the cross from his chest. He tells him he can move, but not very far. Barnabas asks what has happened. Petofi says Jamison is still ill and possessed by David Collins. Petofi says he is far more interested in getting to the future than he was. Barnabas says he can't help, and Petofi accuses him of lying. Petofi says he is sure the people Barnabas is trying to save are those described in the book. He calls to Aristede, who comes in with lit torches. Petofi says he could burn Collinwood to the ground. He says if Jamison dies tonight, there will be no Roger, Elizabeth or David in 1969. Barnabas tells him that he expected better from him. He calls him incompetent. Aristede asks if he should go to Collinwood. Petofi tells Barnabas to think about it. 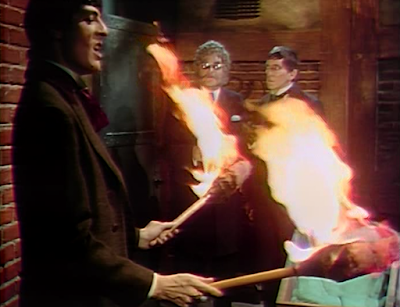 Johnny and Magda sit by a fire. He describes the plan for their trip to Boston. They hear the other gypsy, and see their bags have been ransacked. 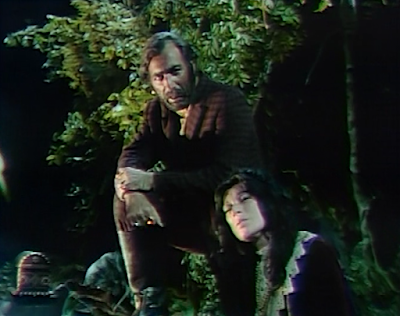 Barnabas tells Petofi that if he destroys the future of Collinwood, there will be no future for him, and therefore no future for Petofi. Barnabas says he will find a way to be free, and Petofi says not before he finds a way to the future. 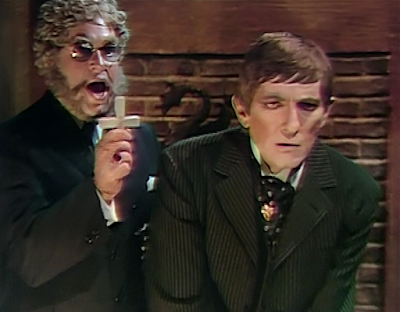 Johnny says that nothing was taken. He says he's going to bless the Hand now. He says that too many non-gypsises have been near the Hand. A hand-less ghost appears by the fire. The severed hand appears in his good hand, and he re-attaches it and disappears. Johnny says that the Hand is gone. He asks Magda who that was, suggesting that she swapped the Hand. She denies having done it. He says they're taking her back to Boston, but she runs away. Johnny sends Istvan to find her. He begins searching as she hides in the woods. 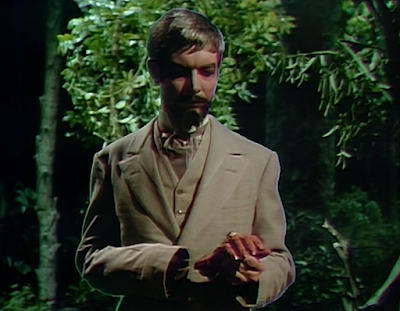 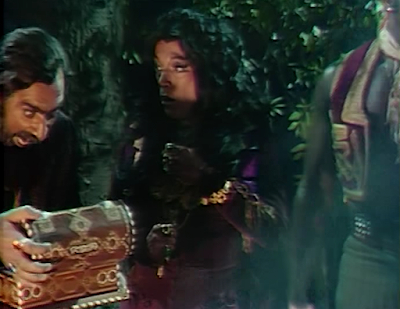 John: Did you notice in the first shot today that Magda's hands looked a little bit like the Hand of Petofi? 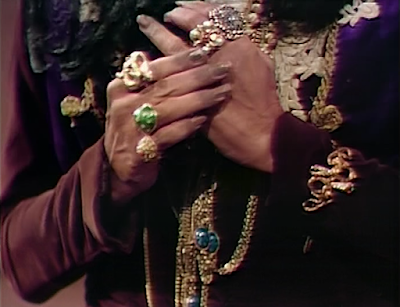 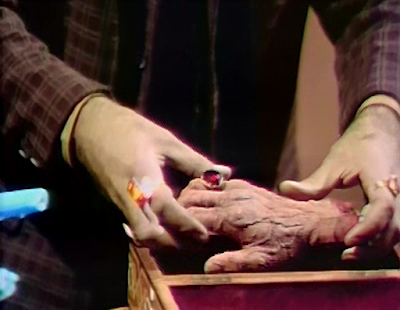 Christine: I had not noticed that, but I did notice an undue amount of attention on hands in general.

John: Gotta love a ghost who takes matters into his own hands—literally! While I was amused that Tate was made to use his artistic skills to 'dress' the hand, what exactly is a painter going to do with a real corpse's severed hand to make it look like a gypsy talisman? Paint? Make-up? Mortician's wax? Seems like he might not have been the best choice. It obviously was good enough to fool King Johnny, and even the original owner seemed fine re-connecting it in the new condition it was in...

Christine: Perhaps Tate applied the same nail polish that Magda is wearing that had you seeing a resemblance between the two. Good ol' Abe got a new ring to make up for his inconvenience. We haven't seen the crew take a chance with real fire in quite some time, and thankfully everyone came out unscathed. 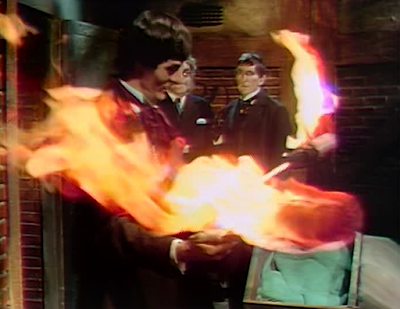 John: Sooner or later they're going to have to have Barnabas attempt to go Back to the Future with Petofi, and with nary a DeLorean in sight, he'll have his work cut out for him. 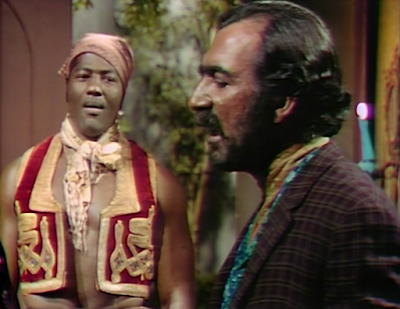