Quentin tells Petofi that Jamison is dying because of him, and that he owes Jamison. Petofi says he owes the boy nothing. Jamison calls out to Quentin. Petofi realizes that Quentin is being called for by the boy from the future. Petofi wonders if there's another Quentin in the 20th Century. Quentin says that the boy recognized him. Petofi tells Quentin that Barnabas can give him what he wants, and Quentin confirms that Barnabas will do anything for Jamison. Petofi tells Quentin he must ask Barnabas, and Quentin asks where he is. Petofi brings Quentin to the chained coffin, and gives him the key to the padlock. Quentin undoes the chains and opens the coffin. Inside, Barnabas lies with a cross on his chest.  Petofi leaves them alone, and tells Quentin they may talk, but he must not touch the cross on Barnabas' chest. Barnabas asks about Jamison. Quentin says he's been possessed by someone named David Collins. 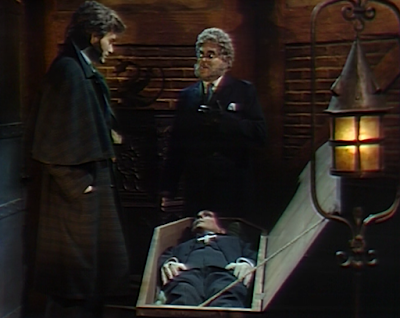 Petofi tells Jamison, calling him David, to open his eyes. He does, and asks about Quentin. 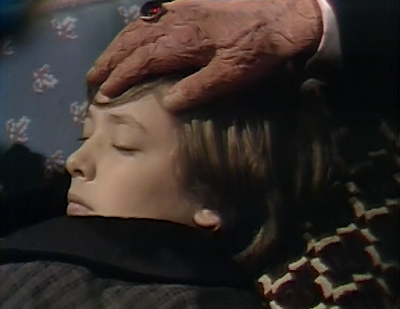 Quentin tells Barnabas that Petofi will save Jamison if he gives him what he wants. Barnabas says he wants him to take him back to the future, to his own time. He says that Jamison must live to ensure the future of the Collins family in the future. Quentin asks Barnabas how David knows him. Barnabas tells Quentin to remove the cross from his chest. He tries, but is unable. 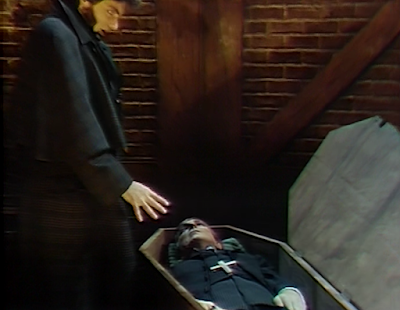 Petofi controls Quentin's hand from the other room.

Barnabas realizes Petofi is preventing Quentin from helping him. He tells Quentin that he cannot take Petofi to the future because he doesn't know the way back. He whispers to Quentin.

Petofi listens in from the other room.

Quentin tells Barnabas that he can't hear him anymore. Petofi enters and Quentin says Barnabas can't take him to the future. Petofi sends Quentin away, and threatens him if he tries to come back. Quentin leaves and Petofi laughs as he closes the coffin. 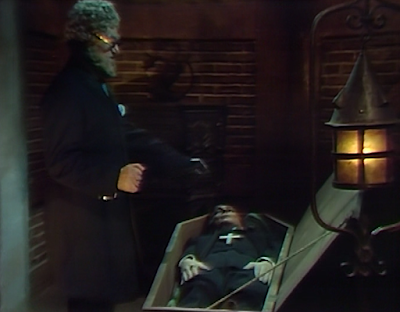 Beth watches over Jamison. He opens his eyes and recognizes Beth. She thinks that means he's Jamison once more. He asks her if it hurts when you die. She says she hasn't died, and he tells her that Quentin told him she killed herself. She says he must have been dreaming. He asks her why she did it. 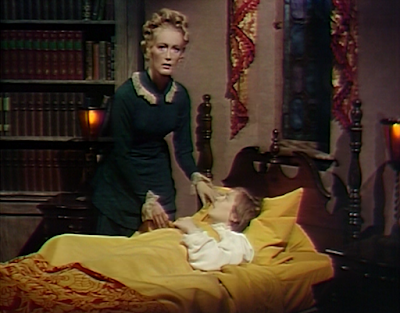 Petofi has chained Barnabas back up, and tells him the only way out is by taking him to the future.

In the coffin, Barnabas thinks there is another way. He calls to Beth to come to him. Quentin asks Beth what's the matter. She asks why he told Jamison that she killed herself. He says he'd delirious. She says he called her Beth, and said she died. She tells Quentin that she's frightened. Beth hears Barnabas calling her. She tells Quentin she must go, and she leaves him. Jamison wakes and asks him why it's so dark. Quentin turns on the lights. Quentin realizes that Barnabas summoned Beth. 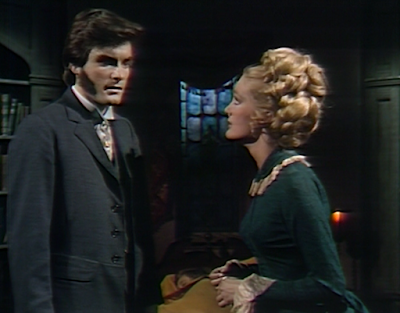 Beth undoes the chains on Barnabas' coffin. Petofi walks in on her, and tells him he will remain chained. She pulls a gun and he tells her she'll regret it. He offers to show her why. She refuses to go with him. Petfoi tells her that Barnabas is her enemy and executioner. He offers to show Beth her own death. She leaves with him. Barnabas tries to tell her not to listen to him. 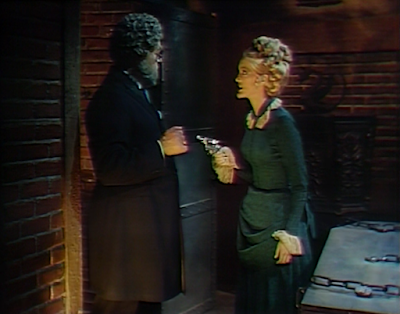 Petofi shows Beth what will happen if she sets Barnabas free. He opens the magic cabinet and she sees a bat outside her window. Barnabas is then in her room, and bites her on the neck. She falls to the ground, dead. Petofi explains that he will kill her. She says it's a trick. He tells her to keep watching. She sees her self rise and bare her own fangs. 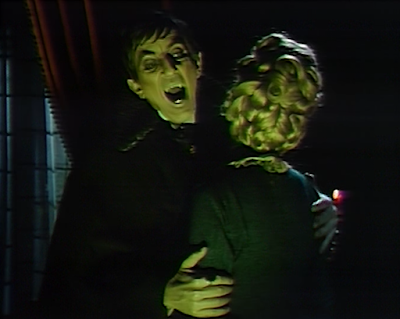 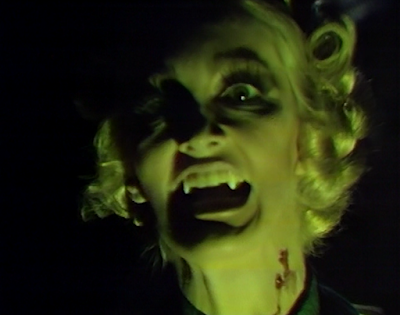 Beth screams, and says it can't happen. He tells her he can save her, and sends her back to Barnabas. Petofi tells her that Barnabas is her master no longer if she turns her back to him. She does, and walks out. Petofi speaks to Barnabas through the coffin, telling him that he is stronger, and there is no one left to help him. 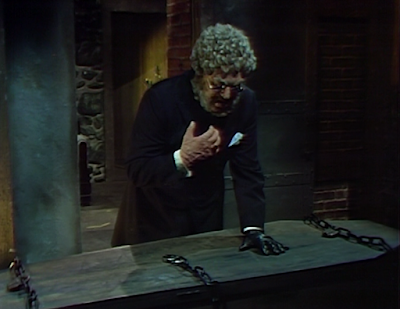 John: Interesting twists with David, since he recognizes Quentin and Beth as ghosts. That should make for some interesting conversations if he sticks around in the past long enough.

Christine: Most definitely. Now that Quentin is aware that Jami-David knows how Beth will die, he's sure to ask about his own demise. If past precedent holds true, knowing how they will die won't necessarily prevent either occurrence from happening.

John: If Petofi is so powerful, why does he need so many layers of protection against Barnabas? His raw power isn't enough, so he adds the cross, but then he also needs to chain it up? Or is it all just for show? Can't wait for Barnabas to turn the tables on Handy-man.

Christine: I was surprised the cross didn't prevent him from making vampire calls. I think all the layers of protection are mostly intended to subjugate Barnabas. I guess we were wrong about Frid getting vacation time. No rest for the vampire.

John: I was wondering where Beth got the key to the lock on Barnabas' chains... of course it didn't really matter since Petofi intervened. Beth's Romper Room mirror experience was more interesting than Barnabas' a few days ago. Problem is, Petofi seemed to be able to see what happened to Beth, when Barnabas found that he could not see what the person looking into the cabinet could see... 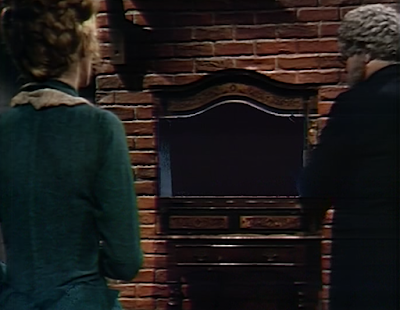 Christine: Perhaps he could see what was on Petofi TV today because it is a future he will exist in, whereas he may never make it to 1969 as he intends. It seemed eerily similar to the time Angelique showed Josette an image of herself as a vampire, before she subsequently leapt from Widows' Hill. Will Beth be following in her footsteps? Incidentally, we got a little too close to Beth's fangs today, which removed some of the mystery. I noticed that Jonathan Frid seemed to have lost his fangs after biting Beth, right before she shows hers off. Do you suppose they were sharing fangs? Because...ew! 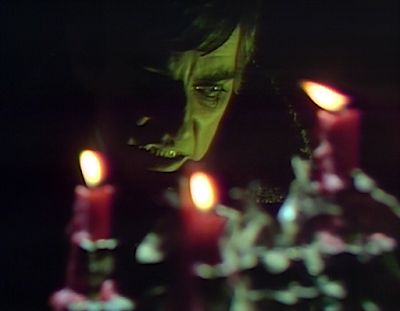 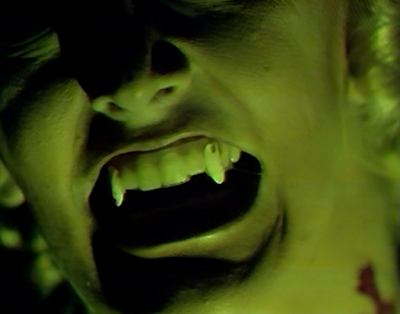