Tim asks Nora for a favor. He shows her the wrapped box, and asks her to hide it in her room. He tells her it's a secret that no one else can know about. He kisses her on the cheek before leaving. Nora hides the box in her armoire, but then takes it out and unwraps it. She shakes the box and then lifts the lid. She removed the wooden box, and attempts to open it. She shakes it, but can't open it. She places it back in the outer box. 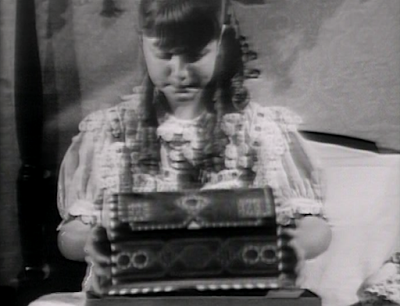 Aristede is in the woods smoking when Jamison approaches. Jamison says he only has hours left. Aristede says he'll be extremely pleased. He tells him that Tim returned to Collinsport with a woman. Jamison asks why Tim would come back. He tells Aristede not to pay Tim a visit. He suggests that Aristede meet with the woman, and he'll take care of Tim. 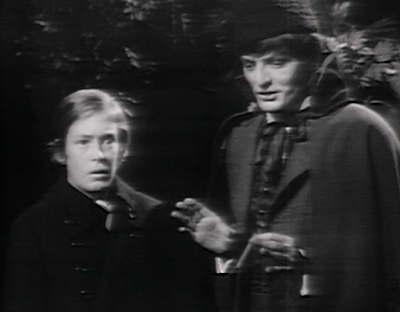 Tim is drinking when Jamison enters, and is excited to see him. Tim asks about Jamison's health, noting that Nora mentioned he was sick. Jamison asks where Tim has been. Tim tells him he was in New York. Jamison asks if he's staying, and Tim says he'll be leaving for good once he takes care of a few things. Jamison sits down with him. Tim checks his watch. Jamison asks if he's waiting for someone, and Tim says he's meeting an attractive woman. He welcomes Jamison to stay long enough to meet her, though he adds that he wants to spend time alone with her afterwards. 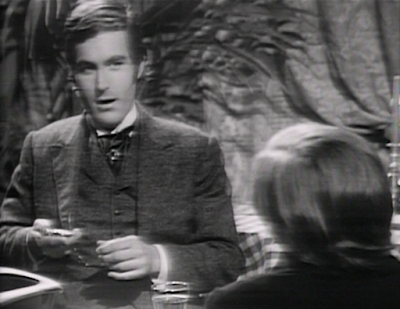 Amanda enters her room, and Aristede grabs her and threatens her with his dancing lady. He tells her that she's dead if she screams. She asks who he is and why he's there. He tells her that she can save her misery by telling him where the hand is. She says she doesn't know what he's referring to and he slaps her. He says he came for the Hand of Count Petofi, and he will kill her if he has to. She asks if the hand is a piece of jewelry. He realizes that she doesn't know what he's talking about. He describes the box the hand was in, and she says she doesn't remember anything like it. He threatens to cut her throat, and she described a wrapped box that was in Tim's room. He asks where it is and she says Tim took it, and didn't tell her where he was going. Aristede says she's either loyal or foolish. He tells her to tell him everything she knows that Tim did. 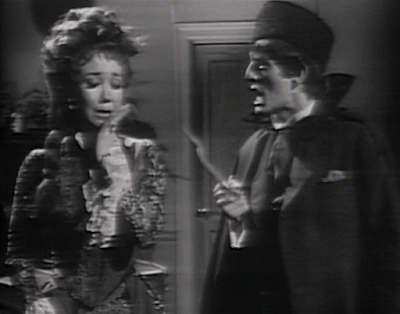 Tim tells Jamison that it sounds like Trask has become the lord of the manor. Tim reminds Jamison that all things, good or evil, come to the same end. Tim's about to check on Amanda when Aristede walks in. Aristede asks what happened to them since they last met. Tim says he was traveling. Aristede suggests that they might get together for a drink in the future. After he leaves Jamison asks who the man is, saying he's never seen him before. Tim goes to leave and Jamison smiles. 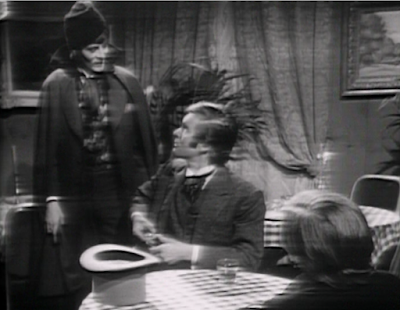 Tim opens the door to Amanda's room and finds her unconscious on the floor. 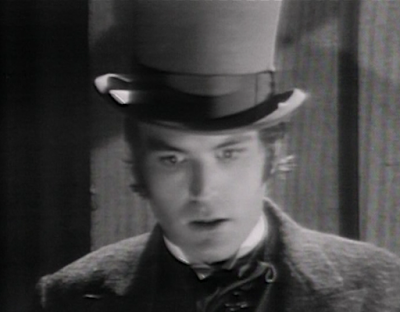 Jamison meets up with Aristede in the woods. Aristede explains that while Amanda doesn't have the hand, she saw Tim leave the hotel with a large box earlier in the evening. Jamison wonders where he took it. Aristede says he took a locket to bribe someone to help. Jamison realizes that it must be a woman. Jamison tells Aristede to stay in the woods. 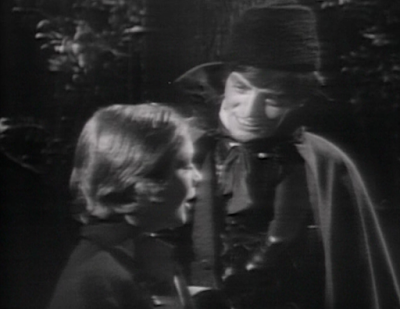 Amanda wakes to find Tim watching over her. He asks her what happened. She says she was grabbed by a man who wanted information. She asks who they are, and what is the hand they're looking for. Tim asks her what the man looked like, and he recognized the man as Aristede. He asks how much she told Aristede. Tim say they will not find the hand, because he's hidden it so well. He tells her that they're safe as long as the hand remains hidden. 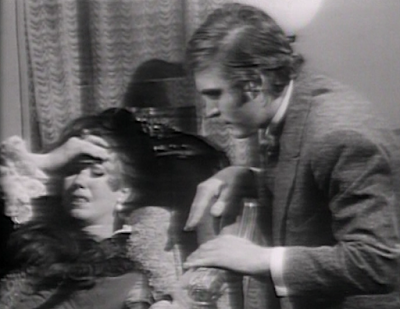 Jamison goes into Nora's room. He wakes her up. She asks why he's up so late. Jamison asks why Tim came to see her. She says Jamison mustn't tell anyone. She promised Tim that she wouldn't. She says he brought a gift. Jamison asks to see it. He says she can't show him something she doesn't have, and she tells him that she does have it. She goes to her dresser and shows him the locket. 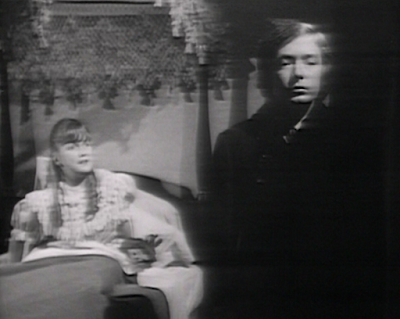 Jamison asks what else he has given. Jamison accuses her of lying to him. He demands to know where it is, and grabs her arm and twists it. She screams in pain. He demands that she tell him where the box is. She breaks down and tells him it's in the closet. 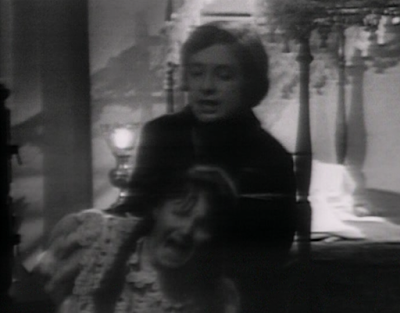 He finds it and unwraps the package. He finds the box inside and opens it up. He removes the hand, and is very excited to have it. 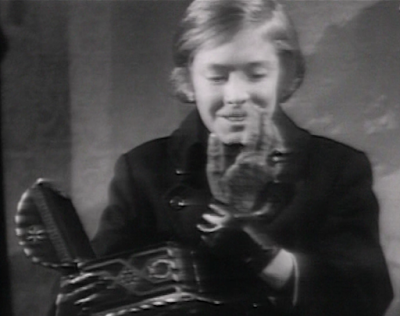 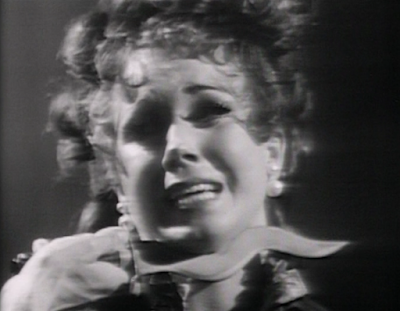 Christine: It's not the first time Aristede has been taken in by a pretty face.

John: Of course! Aristede had to let Amanda live so Tim would know that he was the one looking for the hand. And Tim thinks he's got a brilliant plan. 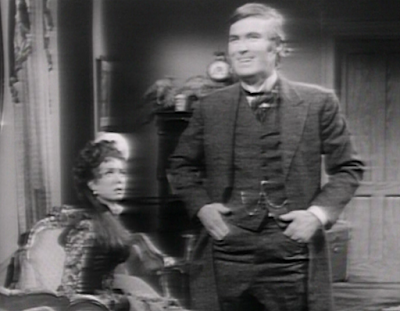 Christine: He's just so pleased with himself. I wonder if he can still carry off his plan for Trask without the Hand.

John: And so much for Tim's brilliant plan to hide the hand. I'm surprised Jamison didn't immediately swap it out for his fake hand.

Christine: David Henesy deserves credit for having us think he might do so. He's really done a stellar job of acting possessed by Petofi. Obviously the Hand wouldn't fit him, but perhaps this means Petofi will end the possession and return to claim it for himself. There should be some interesting goings on by week's end, with Quentin, Tim, Barnabas and Magda all disappointed that Petofi has finally reclaimed his hand. 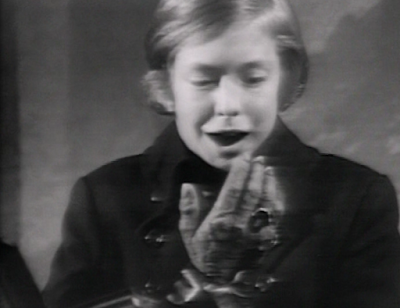