Barnabas goes to enter the room with Petofi, but Aristede stops him. Barnabas threatens to kill Aristede if Petofi has disappeared. They grapple until they are interrupted by Petofi's laugh. He comes out with his hand restored. He says the hand saved him as he knew it would. Petofi introduces himself to Barnabas. Barnabas asks him if Jamison is similarly healed. He reminds Petofi that he provided the hand, and he expects him to honor the agreement he made with Aristede. 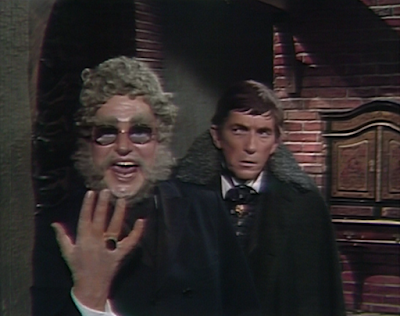 Petofi agrees to honor his commitment, and asks what Aristede agreed to. Barnabas tells him he is to cure Quentin Collins and restore Jamison to what he was. Petofi says Quentin has already been taken care of. Barnabas says he knows that the power in his hand is gone now. Petofi grabs Barnabas' hand, and tells him that he will have marks on his hand, and until they disappear, he will be unable to exploit his favorite trick. He lets go of Barnabas' hand. Petofi tells him to try and disappear. Barnabas says he must find out what happened to Jamison, but he will be back. He stands in the shadows, but does not disappear. Petofi tells him to never doubt his hand. 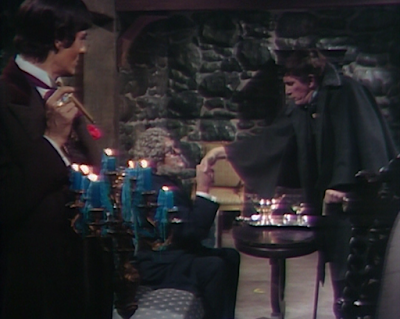 Quentin watches over Jamison, wondering where Barnabas is. He leaves Jamison alone to find him. 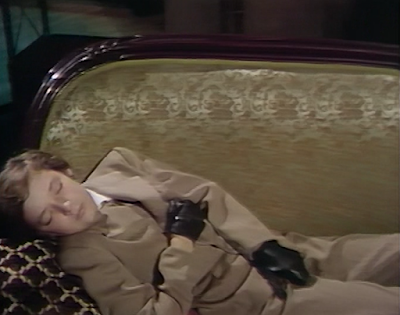 Aristede pours Petofi a drink. Petofi invites Barnabas to join him. Barnabas says he made a mistake trusting him. Quentin arrives and sees Petofi is well. Barnabas asks about Jamison. Quentin says he's in a coma, dying. He tells Petofi he must save him. Petofi says there are some things he will not ask of his hand. He asks Aristede if he should do it, and Aristede says he finds him interesting but maybe not worth saving. Petofi tells Barnabas he'd like to discuss the price of saving Jamison with Barnabas alone. Barnabas sends Quentin back to Jamison. 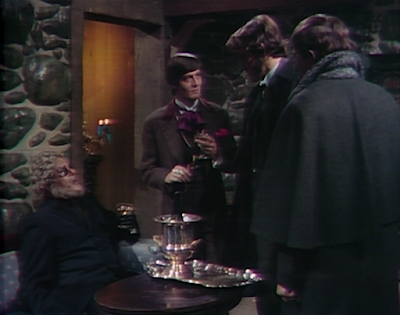 He asks Petofi his price. Petofi says they have the future to discuss. He asks where they'll be in the year 1969. Petofi tells Aristede to show Barnabas the book. He brings out the Collins family history. Petofi says that his price for saving the Collins family is a trip to the year Barnabas left. He says the future is his was to escape the gypsies. Barnabas says he doesn't understand the powers he used to get back in time. He suggests that with all his powers, Petofi should be able to find a quicker way. 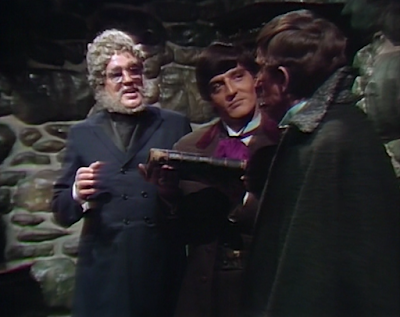 Petofi asks Barnabas if he'd like to see the future. He opens a cupboard and asks Barnabas to look in it, where he will see his own death. Barnabas sees his portrait appear, and then sees Julia in the old house in 1969. David comes downstairs saying that Quentin needs him. She tells David she must reject Quentin. She gives him a shot. He asks to see Quentin and then passes out. 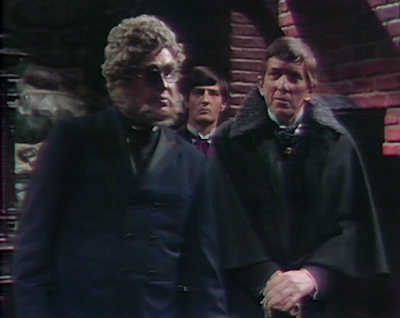 Petofi and Aristede arrive at the old house. Magda asks how they got in. Petofi says Aristede adores secret tunnels. She says she won't help them. Petofi shows her his hand. She recoils in shock. He tells her that she will help them whether she likes it or not. 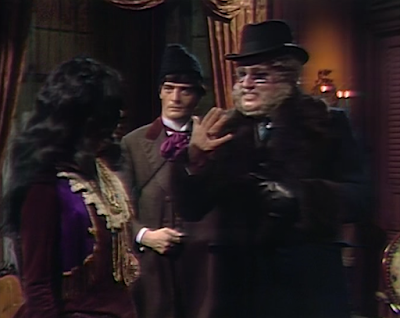 Magda brings them to Barnabas' coffin in an unused wing in the old house. Aristede opens the coffin, and Barnabas is asleep inside. Petofi takes out a cross and places it on Barnabas' chest. Aristede closes the coffin. Petofi tells Aristede to chain the coffin shut. 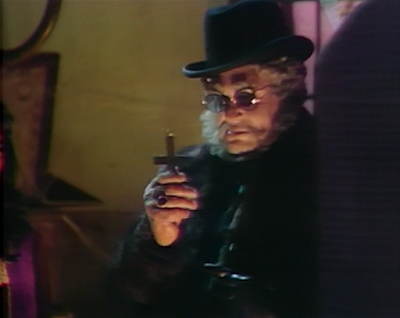 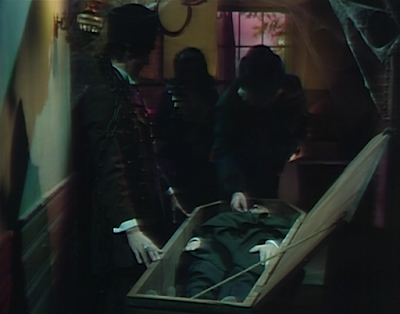 John: They could have done a better job dressing Petofi's hand to make it look like the nasty severed claw we've grown to love.

Christine: It makes sense to me that it would look more refreshed once it rejoined its owner and got the blood flowing into it again.

John: I was excited we were going to get a window to 1969, although to be perfectly honest, what we saw was rather anticlimactic. The most exciting thing was realizing Grayson Hall had to do a costume change to play both Julia and Magda today.

Christine: I thought the most exciting thing was finding out that Count Petofi has a TV that broadcasts the future in his cupboard. I wonder why he didn't use that to see how to get his hand back. 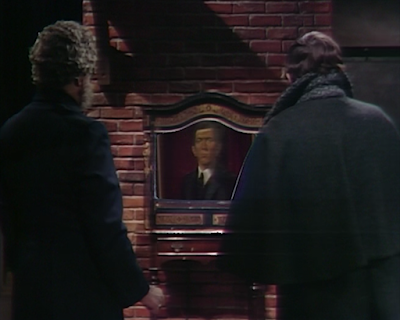 John: Quite an interesting development to have Barnabas chained in a coffin once more, only this time with a cross. Of course one would think the cross would harm him, even when sleeping...

Christine: I was expecting it to burn him, though we'll see what happens when he wakes up. Barnabas is really roughing it. I guess his satin lined coffin is still in the cave. I wonder why he doesn't just hole up in the secret room in the mausoleum. Petofi wouldn't be able to find him there, unless his magic cupboard can show him that. 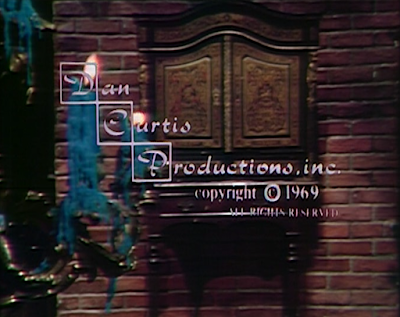