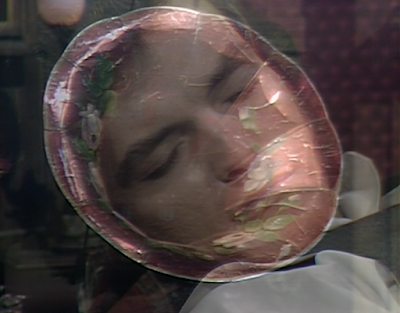 Quentin dreams while his theme plays on the Victrola. He wakes up to Edward choking him. Nora screams and Edward lets him go. She tells her father to let Quentin go, and he tells her not to call him father. Trask comes in and tells Nora to go to her room. Quentin says he wants to talk to Nora, and tells Trask to take care of Edward. Trask escorts Edward upstairs. 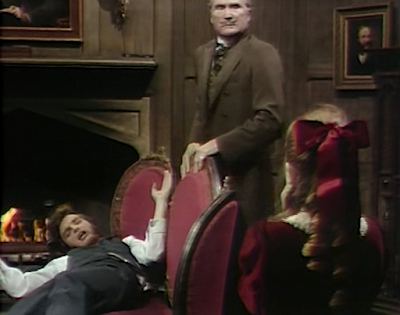 Trask tells Edward he made a mess of things. He leads him back to the tower room.

Nora asks why her father tried to hurt Quentin. He says that he doesn't know what he's doing. Quentin tells her that a magic spell was placed on her father, but he'll be alright. He sends her up to bed. Quentin realizes the only way to end the madness in Collinwood is to find Tim and the hand of Petofi. 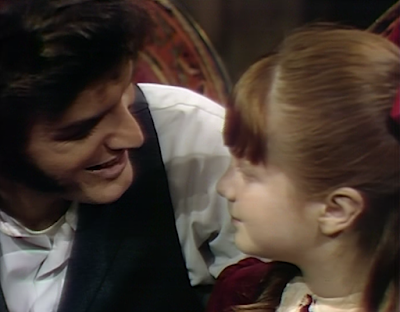 In the Collinsport Inn, Tim opens a locked trunk and removes the box with Petofi's hand. The phone rings and he tells the front desk to wait five minutes and send the person up. He wraps the box with the hand of Petofi. 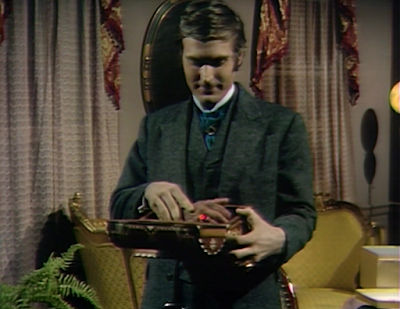 As he finishes, a woman knocks on his door. She comes in and he kisses her. He reminds her that the last few weeks have been profitable for her. She asks what he's planning to do to this man, and he tells her to stop asking questions. He confirms that she knows where she's going, and what she's going to do. Then he gives her the wrapped box with the hand of Petofi and tells her to hide it in her room. 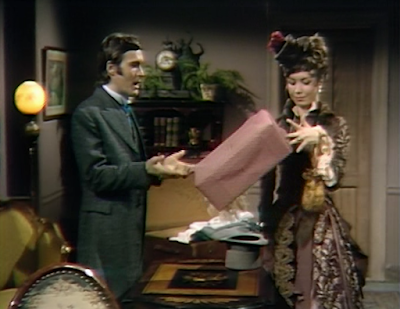 The woman visits Trask at Collinwood. She begs for forgiveness, and says she would have killed herself if he didn't agree to see her. He has her sit down, and asks her what's wrong. She explains that she arrived in Collinsport from New York. She tells him she was running away from a man, and she heard he Trask had a reputation as a good and devout person. She tells him she has done much that she is ashamed of. Trask tells her no sinner is beyond salvation. 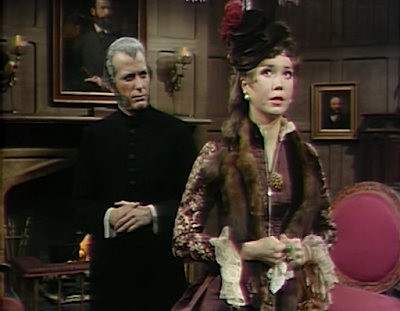 He asks her about the man she's running from. She says he's controlling, cruel and degrading, and she's afraid he's coming after her. She describes him as unnatural. Trask says he sounds like a disciple of the devil, and she agrees that's just what he is. She tears up, and Trask comforts her. He says he can help her if she helps herself. She tells him she'll do anything. He says he'll give her private instruction, which will take time. He pushes her to her knees and tells her to pray. 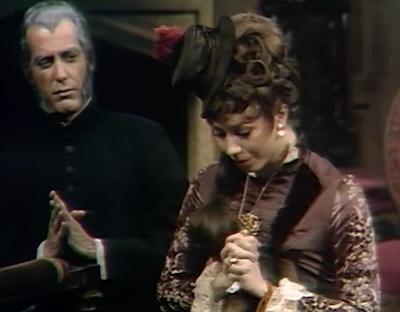 Quentin walks in on them, and Trask tells the woman she can leave, and that she will be hearing from him soon. He asks her where she's staying, and she tells him the Collinsport Inn. After she's gone, Quentin points out the woman's good looks. Trask excuses himself, and makes his way upstairs. Quentin leaves. 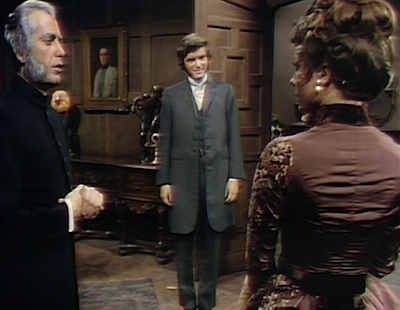 The woman describes Trask as despicable to Tim. She tells him she wants to go out, and Tim reluctantly agrees to take her for a walk on the docks. 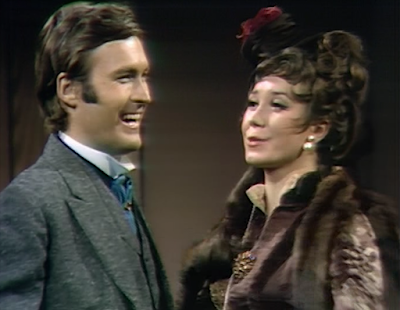 Quentin arrives at the Inn as Tim and the woman are leaving. He hides so they can't see him, and then goes upstairs and rummages through Tim's room.

The woman and Tim return to the Inn and go upstairs.

Quentin looks around the messed up room. He hears Tim and the woman approaching and sneaks out the window. Tim enters, sees the room has been ransacked, and tells the woman to check her room for the box he gave her. He sees that his money hasn't been taken. She returns with the box, and Tim is thankful they didn't make it to her room. He takes the locket from around her neck, grabs the box, and leaves. As he goes, he tells her that the contents of the box are the key to there future, so it has to be safe. 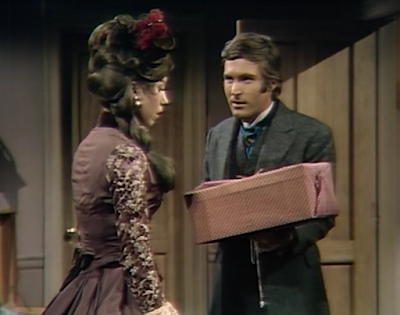 Nora is getting into bed when Tim comes to see her. He gives her a locket, and asks her for a favor. He shows her the wrapped box, and asks her to hide it in her room. He tells her it's a secret that no one else can know about. He kisses her on the cheek before leaving. 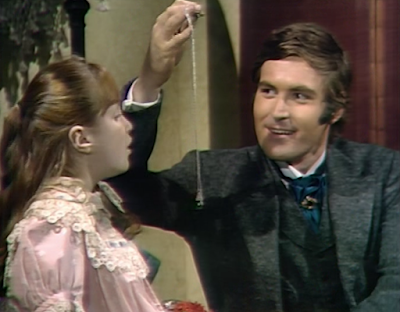 Nora hides the box in her armoire, but then takes it out and begins to unwrap it. 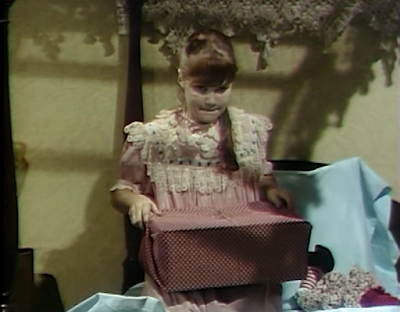 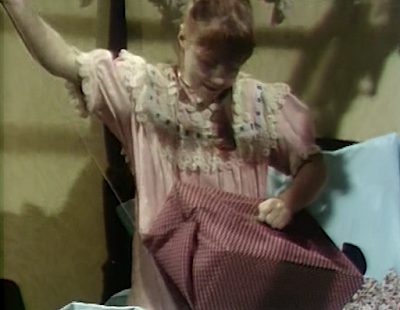 John: Ewww! Yet another Me Too moment with Trask and a young woman in trouble. Of course he's not yet aware that he's being played by the woman, Amanda. 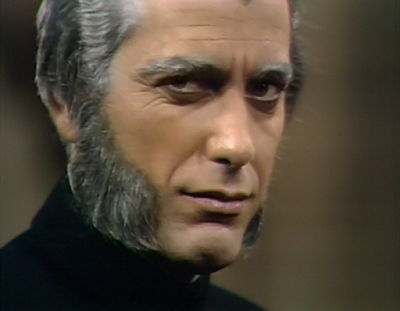 Christine: I wonder if Amanda's resemblance to Rachel Drummond factored in to Tim eliciting her help with his plan for vengeance, knowing that Trask had a thing for Rachel. I love how Amanda rolled her eyes when Trask informed her he was going to give her 'private instruction'. Ewww indeed! 😝 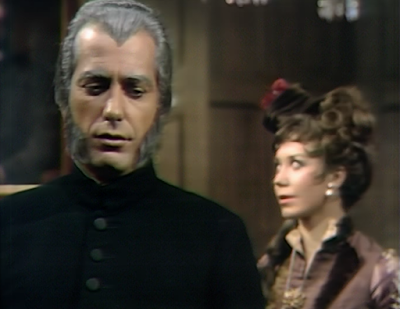 John: How many rooms in the Collinsport Inn do you think Quentin went through before he found Tim's? If only he had started with Amanda's!

Christine: That is funny to think he was going from room to room searching, though I was under the impression that he saw what room they came out of after following her to the Inn. 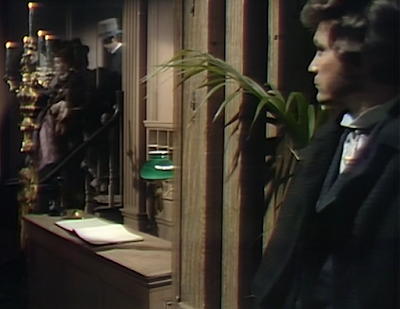 John: Just when you thought the Me Too moments couldn't get any creepier, Tim seemingly puts the moves on Nora to get her help hiding the Hand of Petofi.

Christine: Yikes! I thought he was just playing on her schoolgirl crush to get her to do him a favor, rather than having an Epstein moment with her. I wonder why the Hand has been so good to Tim, and if it will go hide itself after he came up with such a lame plan to keep it safe by giving it to a child wrapped up like a birthday present. Too bad Mr. Wells didn't have an ancestor working at the Inn who could have locked it in the hotel safe for him. I hope Nora enjoys the gift!