Barnabas asks for details on how the I Ching works. He says it's his only chance to get Quentin to release David. Stokes hands Barnabas the wands, which he throws on the desk. Stokes says it's the 49th hexagram of change. He tells Barnabas to concentrate on a door with the hexagram on it. Barnabas concentrates on a door with the hexagram until it opens. He opens his eyes with a start. Julia asks if he'll see Quentin, and Stokes tells Julia that only Barnabas will know what happens. 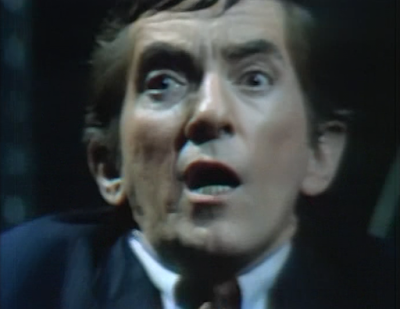 Barnabas sees a chained coffin behind the door.

Barnabas appears to have woken up in the coffin. 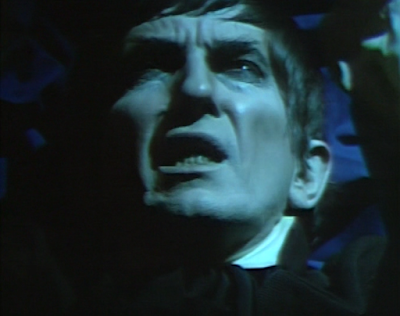 Two gypsies are in the cobweb-ridden old house. The man, Sandor throws knives at a calendar on the wall. The woman, Magda, remembers the time when he would throw knives at her. She tells him when they leave Collinwood, they're taking rubies. She mentions a dying woman who was wearing them. She says when the woman dies, they must leave. She tells him that the jewels are in the drawing room. He refuses to do it. She demands that he do it tonight. 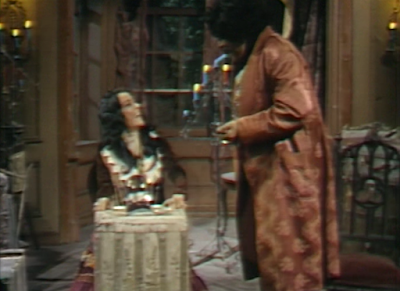 Quentin arrives at the main house. Beth answers the door, and he tells her that she's still beautiful. She tries to keep him outside but he forces his way in. He asks her why she didn't leave with her mistress, Jenny. He looks around the house, and says he's missed home. Beth says he shouldn't have come back. He tells her that he couldn't let his rich grandmother die alone. She asks if Edward knows that he's coming, and tells him that he'll throw him out. Quentin tells her that she missed him, and adds that her life was more exciting when he was around. He then tells her to take his bag to his room. 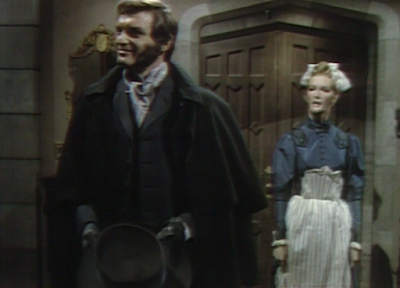 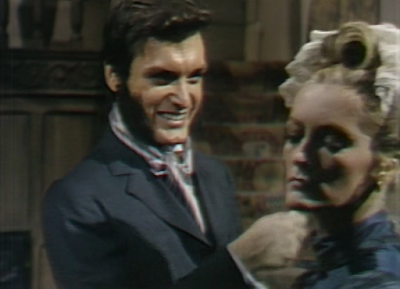 She goes to tell Judith that he's there, and he asks to see Jamison first. She points out that the boy is asleep. He then says he'll see his grandmother first. He goes upstairs, and as he does, asks Beth if she's well enough to make out a new will. He tells Beth that her life would be simpler if she admitted how interested she was in him. As they leave, Sandor sneaks in through the drawing room window. 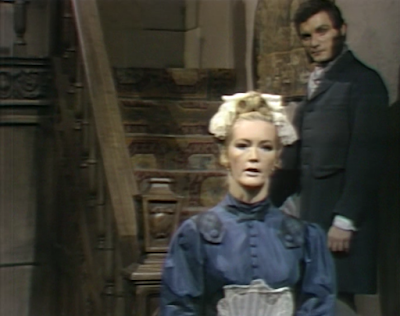 A door opens in grandmother's room, and she is happy to see Edward, and says that now she can die. She realizes that it's Quentin, who she says can kiss her just once. She tells him that he has the nicest smile. She tells Quentin that he is the Tower of Destruction in the Tarot. He tells her that cards don't change, but he has. 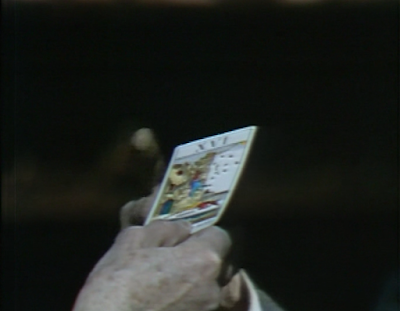 He apologizes for what happened and she says he always had an excuse. Quentin tells her that her money should go to him. She says that she enjoys him, but she can out-think him. She says when Jameson brought her his letter, she realized that Quentin was using Jameson. She tells him that every one of them will get what they deserve, except Edward, the eldest, who she'll tell the secret. Quentin asks her to tell him the secret, and she says she hears someone coming. 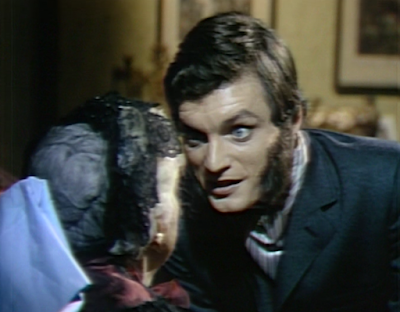 Beth turns out the light in the drawing room, and after she leaves, Sandor comes out of the darkness.

Quentin presses his grandmother for the secret, but she is asleep. After he leaves, she sits up and smiles. 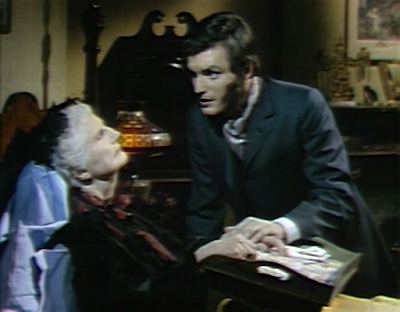 Quentin finds Sandor in the drawing room. He asks if he should call Carl and Judith, or if he'd prefer that he call the police. 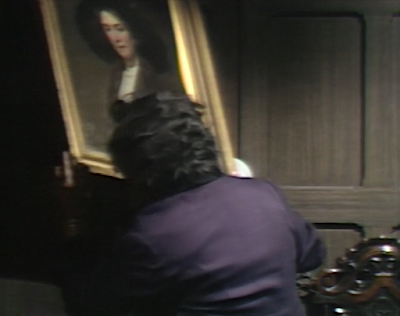 Barnabas, chained in the coffin, realizes that he must will someone to find him. He doesn't even know what year it is.

Magda looks into a crystal ball when Sandor returns. She asks if he found them, and he describes all the jewels he saw. She asks where they are, and he tells her he gave the to Quentin. He then tells her there are no jewels in the house. She asks why Quentin is there, and he says to catch him. She says she'll find them. Sandor asks her why they would let Quentin come back, and assumes it means the old woman is dying. Magda tells him to look into her crystal ball. In it, they see the mausoleum, and the lever that opens the secret room. Magda says that must be where the jewels are hidden. She says they must go, but they run into Beth, who says Edith has to see her. She tells Sandor to go. Beth says Edith wants to be told that she'll live long enough to see Edward. Magda tells Beth to tell Edith that she's coming with some old gypsy cards. 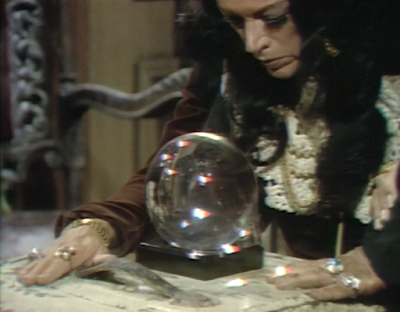 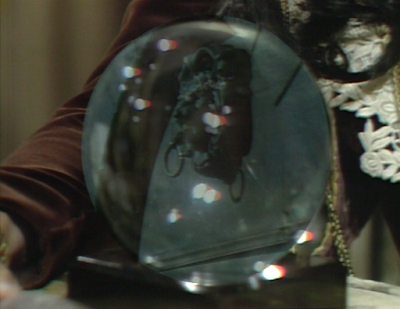 Sandor opens the secret door in the mausoleum, and finds the chained coffin inside. He doesn't believe the jewels would be in the coffin, but realizes Magda would say that's where they are. He removes the chains and opens the lid. Barnabas' hand reaches out and clutches his throat. 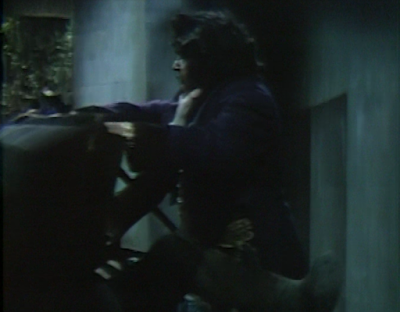 John: And just like that, we're catapulted back to 1897! I don't know if I was ready to begin the longest flashback storyline in the history of the show, but as has often been the case, this initial introduction has exceeded my expectations. Of course I'm not thrilled about leaving things hanging with the lives of David, Chris and Sabrina up in the air...

Christine: I'm always ready for time travel on Dark Shadows! That Quentin is a real nasty piece of work! We can already see from the get-go why he may have been walled up in the West Wing. He makes Nathan Forbes look like a saint! It's interesting to note that Edith associates Quentin with the Tower card, which is the card that Liz found in Roger's room after David tried to kill him at the behest of Quentin in Episode 647.

John: It almost seems like a missed opportunity for John Karlen to have portrayed Sandor, just so he could re-live the original coffin-opening and throat clutch. That said, Thayer David does a fine job as a gypsy, and he's not alone. I don't know if Grayson Hall has been better than she is as Magda.

Christine: She really shines in that role. Isabella Hoopes also does an amazing job as Edith Collins, and the interplay between Edith and Quentin is fun to watch. Everyone seems on point for our first day in 1897. 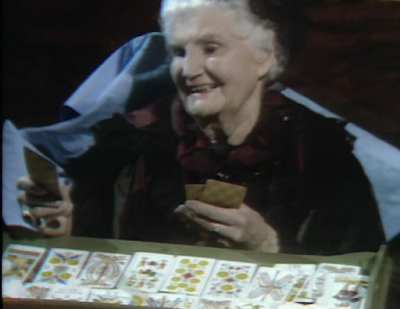 John: I wonder if Magda's crystal ball will pass through history to become David's crystal ball? And I guess the most important question, which is surely to be answered this week—is the 1897 Barnabas still a vampire?

Christine: I don't think he'd survive being chained in the coffin if he weren't a vampire, and his makeup suggests he is, though I've been fooled before. It will be interesting to see if his portrait still hangs in the foyer, and if he'll have to pretend to be another descendant of himself should he decide to make a reappearance at Collinwood. Portrait watchers may note that the portrait of Isaac Collins can be found hanging over the mantel where Jeremiah's portrait hangs in 1969. 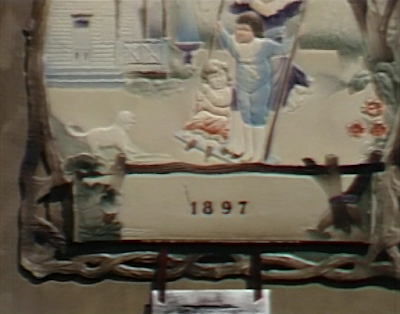