Magda tells Barnabas that she knows what he is. She then begs him to stay away, but as she steps outside a bat lands on her. 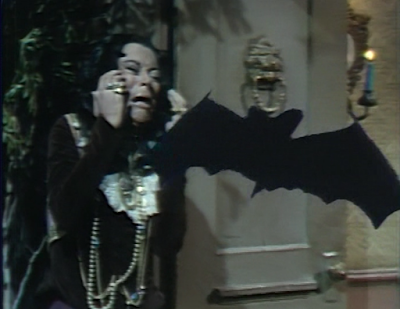 Magda begs Barnabas to let go of her. He tells her that if they hold up their end of the bargain, he won't hurt either one of them. She asks him what he wants. He tells her that for now, they just need to protect him during the day. She points out that she could destroy him in his coffin during the day. He confirms that, and adds that Sandor was looking for the family jewels earlier. He points out that he knows where they are. He offers to give her some of them if she does what he asks. He gives her a ring, and tells her there will be more. 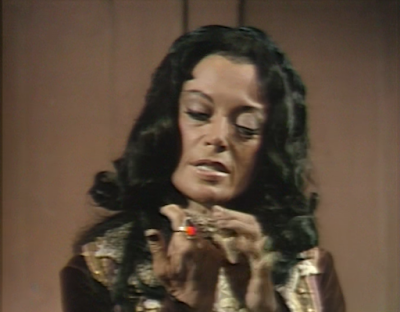 He then asks her about Quentin. He asks why he's so interested in the family secrets, and why he thought she could help him. She says he wants to know the family secret. Barnabas asks if Edith told Quentin her secret. He also probes further, and then tells her that the Collins clan is about to receive a visitor—a distant cousin from England. 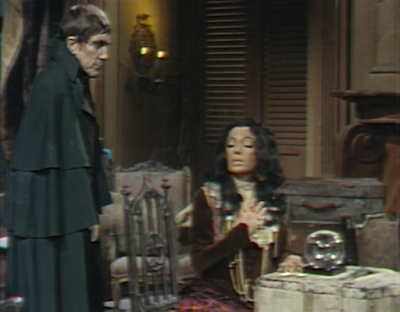 Quentin comes downstairs and finds Judith in the drawing room. He points out that she ingratiated with their grandmother while he was gone. She says she's fulfilling a familial obligation. He asks when she got a backbone, and he tells her since he refused to take the money she offered him. He demands to see his grandmother, but Judith refuses, saying she's too ill. 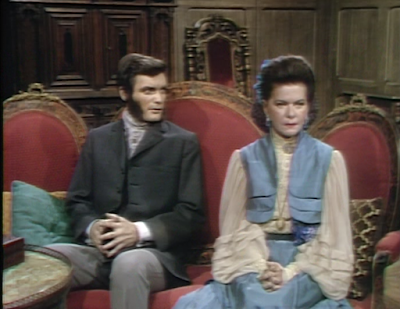 There's a knock on the door, and it's Magda to see Edith. Judith tells her the same thing, that she's too ill to see visitors. Magda says she has a serious warning for Edith. Quentin asks her for more detail, and she says she can only tell Edith. Judith leaves them, saying that Magda can pass the warning from one charlatan to another. She says it concerns the family, and Judith reluctantly agrees to hear her out.

Magda explains that a stranger will arrive after sunset. Judith asks who the stranger is. Magda says she doesn't know his name, but he will pretend to be a friend or relative. She says he must not be trusted, because he is a creature of darkness. She adds that Quentin will have the most to lose. Beth listens at the drawing room door. 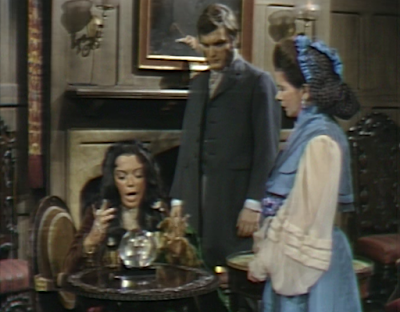 Judith says she'll pass on the news to Edith. Magda leaves, and Quentin tells Judith that perhaps the gypsy is the one she should ingratiate herself with. 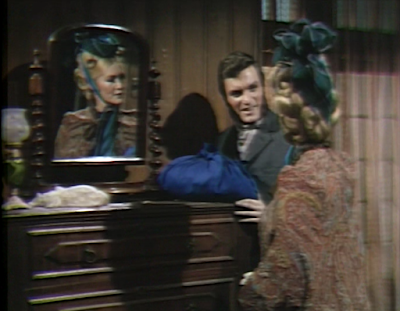 She threatens to tell his brother Edward about his threats when he returns. Quentin explains that his brother Edward must be the reason she has the money. She slaps him, and tells him to leave her alone. He says she doesn't want him to leave her alone. She says that next he'll tell her that she stayed around just waiting for him to come back. She says he could ask a gentleman friend of hers from Collinsport, and that Quentin might even learn something from him. 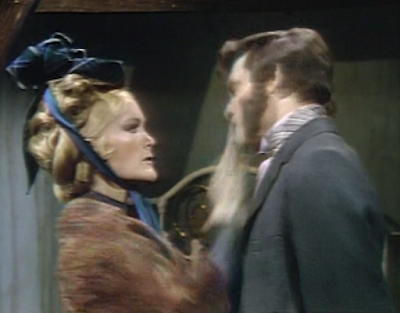 Barnabas arrives at the house, and introduces himself to Judith. She invites him in, and he says he's from the English branch of the family. She explains that Edward is the head of the family, but he's not there now. She invites him to wait in the drawing room while she gets her brother Quentin. 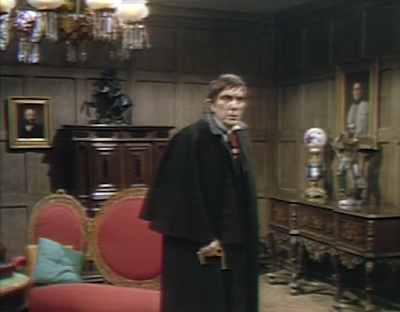 Judith tells Quentin the gypsy was right. They come downstairs, and she tells Quentin she'd swear it's the man in the portrait. They enter the drawing room and she introduces Quentin to Barnabas. Quentin points out his resemblance to the portrait in the foyer. Barnabas explains he's a direct descendant of the original Barnabas Collins, who left Collinwood and went to England. Quentin apologizes for their lack of knowledge of family history. They offer him a drink, and he accepts a cup of tea. 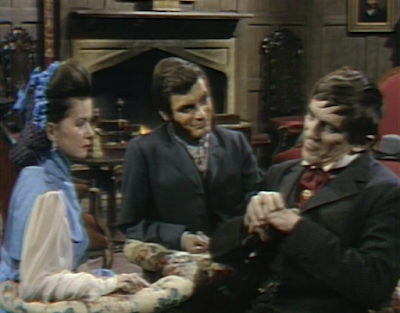 Judith leaves to take care of that, and Barnabas asks Quentin about his brother Edward. Quentin says he fancies himself the head of the family, but the true head is their grandmother Edith. Quentin asks what boat he arrived on. Barnabas says the Pride of Jamestown, which arrived at 4:30. Barnabas asks about the location of the portrait of Joshua Collins. Quentin says it's in the West Wing. Barnabas turns and finds himself at the business end of a sword. Quentin says he just returned from England, and there has never been an English branch of the family. He gives Barnabas five minutes to explain who he is and why he is there, or he will run him through. 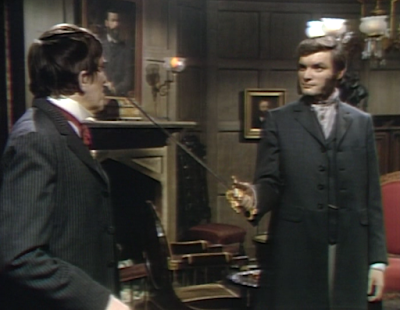 John: Interesting that Magda seems not to be concerned about Barnabas' threats, as she provides the family members with a warning about his impending arrival.

Christine: I initially thought that might have been part of the plan, but that doesn't seem to be the case after all.

John: Aside from the muttonchops, Quentin isn't as scary now that he speaks. Sure, he's not a very nice guy, but he was much creepier when he was mute.

Christine: I think that's debatable. He's got that slimy charm that makes him creepy in a more lecherous way. 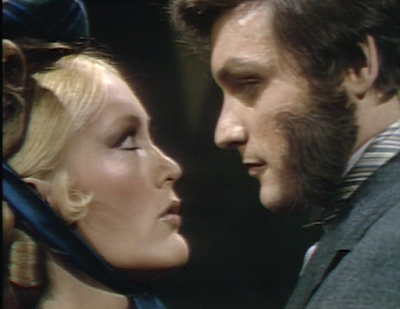 John: Wow! Despite Barnabas researching a boat arrival, he wasn't prepared for someone digging a little deeper into his story. Quentin sure seems to be sharper than the average Collins. It doesn't even seem as if he would have needed the gypsy's warning to catch Barnabas in his lie. I guess what's most interesting is why there wasn't a reference to a second Barnabas returning to Collinwood 100 years after the first 'left for England.' That certainly would have made for a more interesting story... not unlike the Phoenix returning every 100 years... a new cousin Barnabas returning every 100 years... 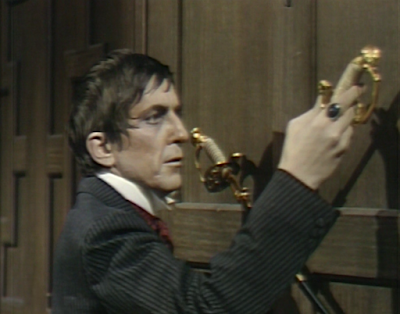 Christine: I tend to think that Quentin was testing Barnabas by telling lies himself, expecting Barnabas to catch him on them. For instance, surely the portrait of Joshua Collins does hang in the drawing room and not the West Wing. I'm not changing it on the Collinwood Portraits page just yet! 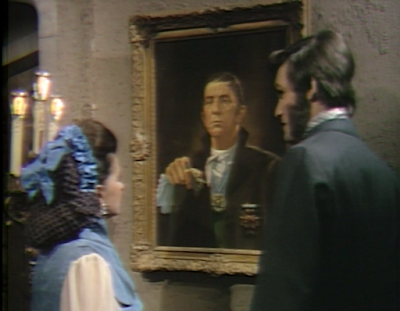 Ah, I'd forgotten Magda warned them. That helps the unhappy events with the sword to take place. I don't know as it's likely that folks repeat bits of history like a cousin showing up bearing a portrait resemblance. So much gets covered-up so often over the years.