Edward wears a black armband in the drawing room. He opens a can on his desk and two spring snakes erupt from it. Carl comes out from behind a curtain laughing. Edward castigates him for his behavior. Carl says he knows that their grandmother died without giving him the secret. He adds that someone in the house knows the secret. 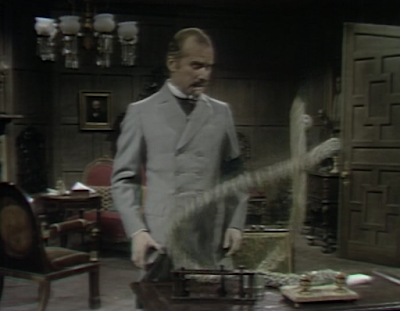 Judith comes downstairs dressed in black. Edward sends her into the drawing room. Carl comes down, and Edward asks him where Quentin is. He says he's upstairs. He sends Carl into the drawing room, and Quentin comes downstairs. He is also directed into the drawing room. Edward enters and closes the doors behind him. He tells them that their grandmother died before giving him the secret, but she gave it to one of the three others. Carl says that Magda knew when Edith died, and that she didn't tell Edward the secret, but someone else knew it. Quentin says it's obvious that Judith knows the secret. He says she saw more of their grandmother in the last week, and prevented others from seeing her. She denies knowing the secret. They bicker, and she tells Quentin to tell his brother what he did, forcing their grandmother to tell him. He admits that it's true, but says that she didn't give in to his demands, as she wasn't afraid of dying. 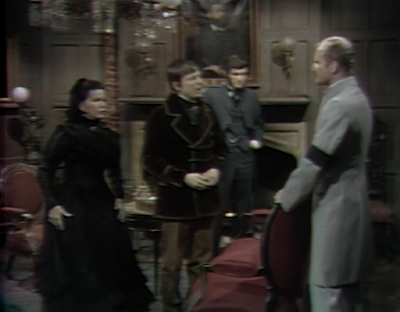 Edward says that one of them is lying, and they won't leave the room until one of them admits it. Quentin reminds him that one other person saw their grandmother—Barnabas. Edward sends Carl to get him. Quentin says he may have forced it out of her. 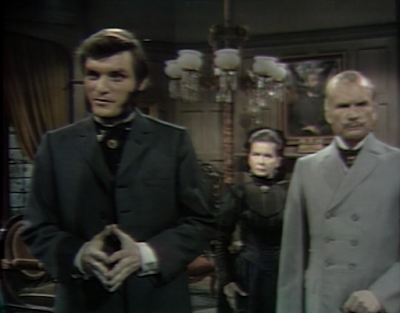 Carl arrives at the old house to get Barnabas. He calls for him, but can't find him anywhere. He approaches the cellar and runs into Sandor. Sandor tells him that Barnabas isn't there. Carl asks why they're still there, and Sandor explains that they're working for Barnabas now. Carl asks when Barnabas will be back, and Sandor tells him tonight. Carl tells Sandor that he can come tell his brother that Barnabas is away. 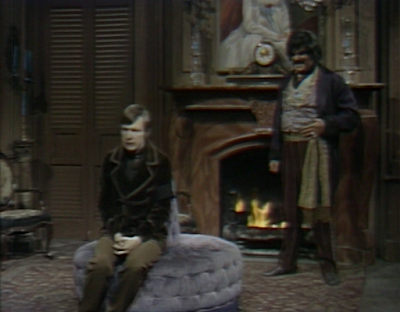 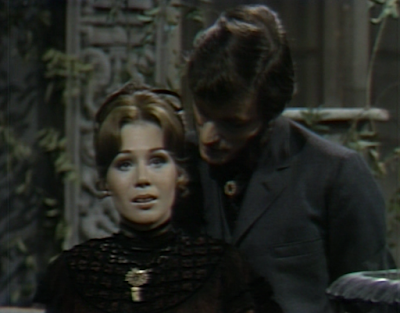 Carl brings Sandor to Collinwood. He asks Sandor to tell Edward that Barnabas left the old house early in the morning and will be back after sundown. Edward asks about his business, and Sandor tells him he doesn't know anything. Carl and Edward retire to the drawing room. 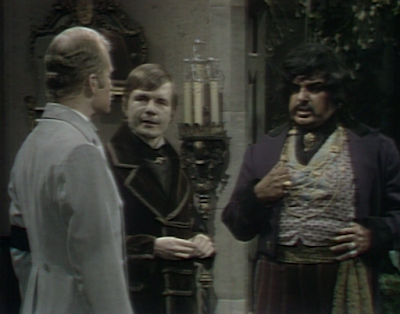 Judith calls to Sandor from the top of the stairs. He tells him that now that their grandmother is dead, he and Magda have 24 hours to get off the property. 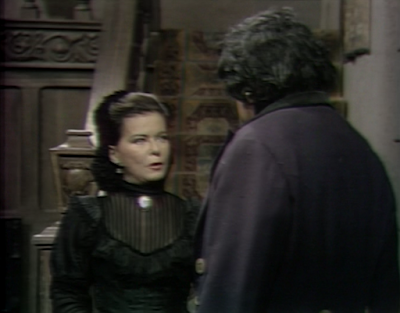 In the garden, Rachel looks up to the tower and sees lights on. 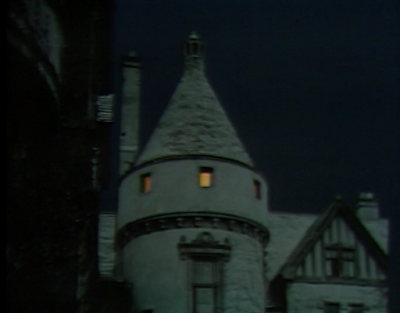 Judith asks Edward to speak to him. She says that his instructions concerning the tower room have been carried out to the letter. He says he put her in charge and doesn't need to hear about it. He asks her if something has gone wrong. She says everything has gone smoothly, and Beth goes to the room three times a day. He tells her that he doesn't want to hear more about it. He asks if Beth is happy with her compensation, and she says yes. He tells Judith that he does not want to be told or reminded of the problem. 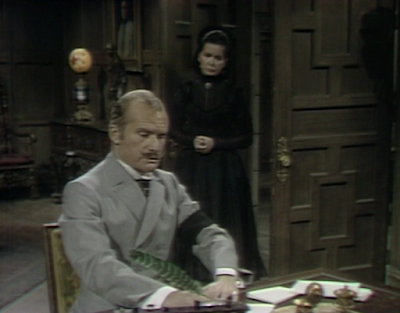 Rachel bursts in and says she saw a light in the tower room. Judith goes upstairs, and he asks Rachel why it disturbed her, and she explains that Quentin had spoken to her about the legend. He tells her that there is no electricity in the room, and he'll take her out on the terrace to prove it. After they leave, Judith comes back downstairs. 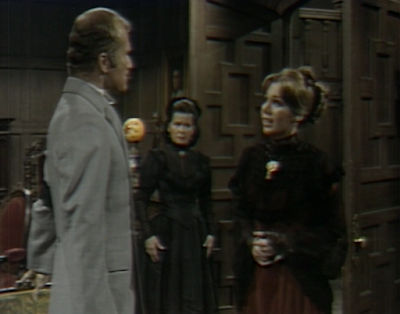 Outside, Edward shows her that the tower room is in fact dark. 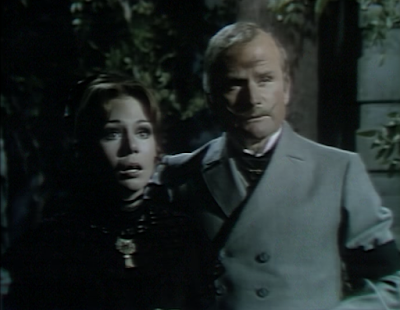 John: Did fake snakes-in-a-can tricks even exist in 1897? A quick search on Wikipedia suggests that the trick "was invented by Samuel Sorensen Adams of the S.S. Adams Co. circa 1915." I do like the eccentricity of Carl "The Joker" Collins. I wonder if we'll see more tricks from him as the show goes on. 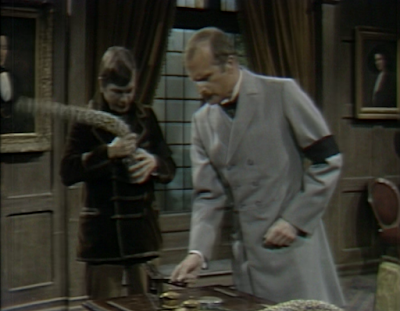 Christine: Perhaps Carl invented them, but never had the chance to get them patented. I wonder whatever happened to that fabulous lavender circular seat in the Old House. That is an interesting piece of furniture! Josette's portrait has been reinstalled over the mantel, paving the way for Barnabas to allow himself to be distracted by fond memories of his long lost love. 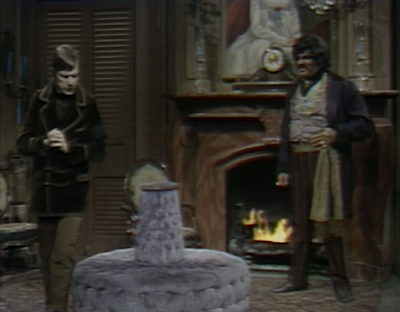 John: At least we now know that Quentin has a 'type': shy, innocent and very beautiful. I wouldn't say that his slimy charms are working on Rachel, however.

Christine: Perhaps not, though we can see why he was so interested in Maggie, once he stopped trying to strangle her to death.

John: Okay. So are we to believe that Beth is delivering food to Edward's estranged wife, who for some reason is confined to the tower room? Can she possibly be another form of Cassangelique???

Christine: That certainly seems to be what's going on. It will be interesting to see which of our present day ladies will be taking on that role, if so. 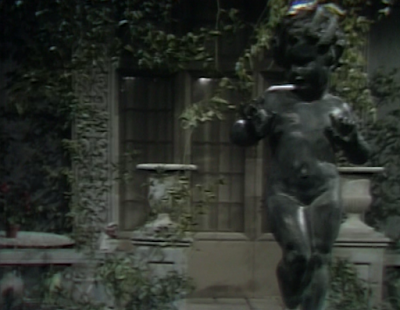