Beth brings Dirk a washcloth for his head. She asks him what Jenny hit him with. He says he doesn't know, and asks if Judith has found her yet. Beth says she's left the West Wing, and is in the East Wing somewhere. She adds that she's concerned someone else will find Jenny. 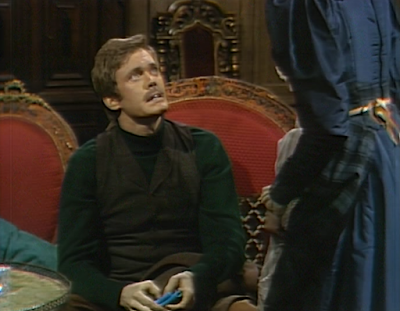 Jenny wanders through the house.

Beth says Judith never should have involved Dirk. He says now he knows about the big dark secret. She says he'd better keep it, and he says he will because he's being paid to keep it. Dirk asks how long she's known about Jenny. She says since the beginning, since her breakdown when Edward locked her in the tower room. He asks if she knows what caused her breakdown, and she unconvincingly denies it. He says she was her personal maid, and must know, as Jenny slips out the front door behind them. They see her, and head out after her. 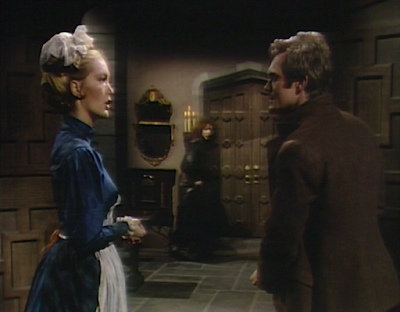 Quentin comes to see Barnabas. He says that Magda says he is marked for death soon, and asks if Barnabas knew that. Barnabas says he doesn't understand what he's talking about. Quentin says that Barnabas knows more than he's saying, and suggests they lay all their cards on the table. Quentin details the things Barnabas seemed to know about, such as Quentin stealing the will, and it showing up again. Barnabas says he's interested in hearing more about his being marked for death, as he's concerned about his well being. Quentin says he does not want his concern. Barnabas says he intends to stay at Collinwood. Quentin tells him he need not worry about the gypsy's death threat, and threatens him not to interfere with his plans. Barnabas offers Quentin a warning about Angelique. Quentin is surprised he knows about her. Barnabas says that if he trusts her, he's a fool. Quentin is curious how Barnabas could know about her, and says he's going to find out about his secrets, He leaves the old house, and Jenny emerges from the woods. 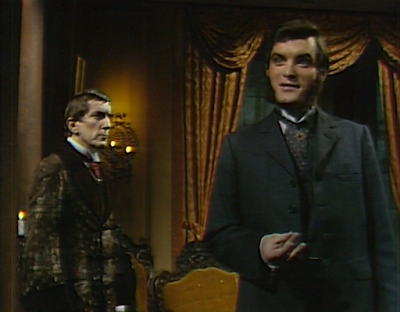 Beth arrives at the cottage looking for Jenny. She searches around but does not find her. She lights a candle when Quentin returns. He says he didn't think she'd come to him voluntarily. She says she didn't, but won't say why she's there. He says that on her way to grandmother's house she ran into the big bad wolf. He says they were meant to be together, and kisses her. She breaks away from him and runs off. 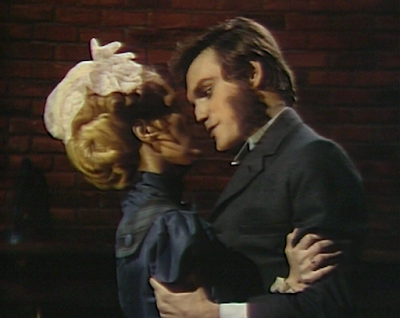 Barnabas hears a noise outside and finds Dirk outside. He makes up a story that one of the children is missing from Collinwood. Barnabas asks which child. Dirk says it was Jamison. Barnabas offers him the opportunity to search the house, in case he came in the back way. Barnabas says that if they don't find him, he'll help him search. Dirk is nervous, and tells him it's not necessary. He adds that everyone is already searching, and they may already have found her by now. Barnabas presses him. Dirk says he's worried. Barnabas tells him to come with him to check the house. 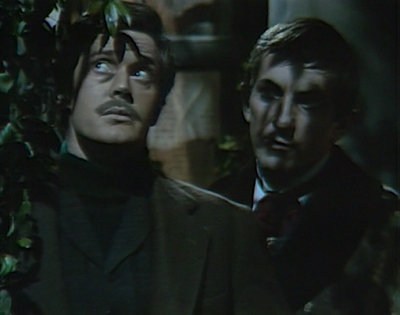 Quentin sits in a chair by the fire when there's a knock at the cottage door. He's sure it's Beth, but when he opens the door, he's shocked to see Jenny. She tells him that he's the one. He says no one told him she was still there. She says she was singing that night, and he saw her and brought her here. She says that he left her. He tells her that he came back, like he always intended to. She says that his name is Quentin. He asks what happened to her. She says her name is Jenny, and she thought they would be happy together. He tells her that they can be—she's still his wife. 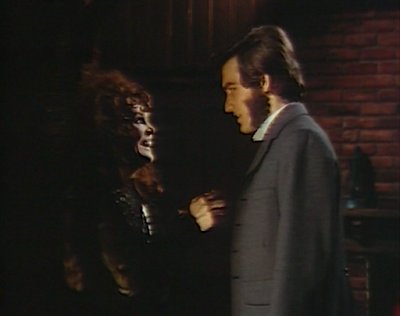 She asks why he left her, and he says they can talk about it on the way back to Collinwood. She doesn't want to go, and he says it's alright. She says she knew he was back because she heard the music in the room they keep her in. She says he always came to the cottage to meet other women. He denies it. She asks if he still thinks she's pretty, and he says she is. She tells him to kiss her, and he does. She tells him that he won't go away any more, or lie to her. 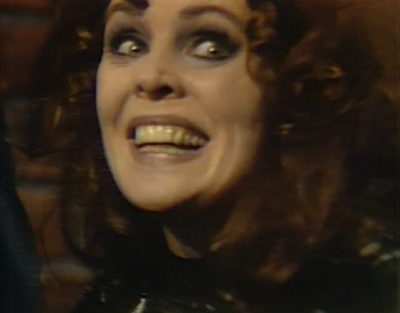 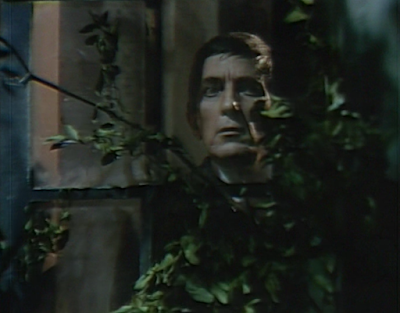 Beth returns to Collinwood when Jenny calls to her. She tells Beth she visited someone she knows. Beth asks who she visited. Jenny asks about her babies, and Beth says they're downstairs where she left them. Jenny says that Quentin is gone. Beth says he's been gone for a long time. Beth takes her inside with her. 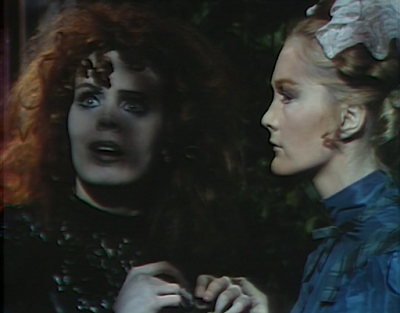 Dirk explores the cottage, and almost trips over Quentin's body. He's lying on the floor with a knife in his chest. Dirk gets up and turns to find Barnabas in the doorway. He tries to get by him, but Barnabas says he's going to stay and answer a lot of questions. 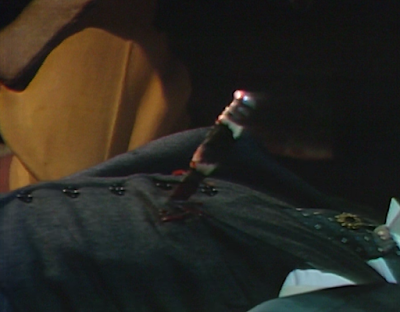 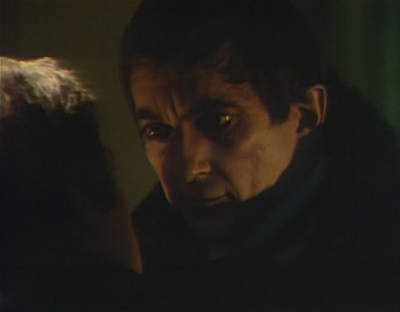 John: Ah, there's the patented Roger Davis head grab we've been waiting for! Granted, he was applying a washcloth to his forehead... 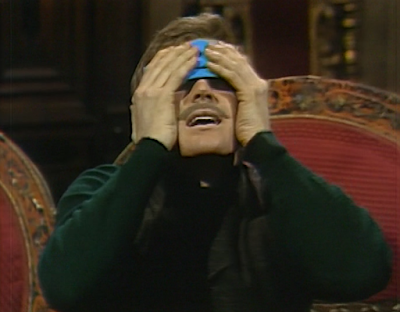 Christine: Yes, but he was hit on the back of the head, which would have been a more appropriate place to apply a cold compress, so he appears to be employing his signature move rather faithfully here.

John: We finally got our long-awaited face off between Quentin and Barnabas. I had always assumed that they would be allies, so it's interesting to see them pitted against one another. 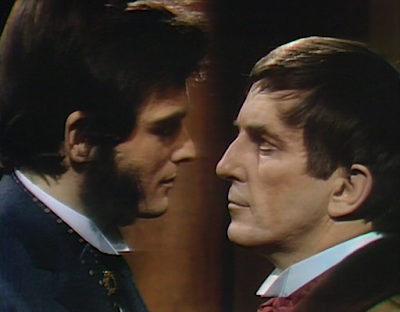 Christine: Quentin seems to be one of those uncomfortable close talkers. I'm surprised it didn't tempt Barnabas to give him a little nibble, though Barnabas has not really engaged in many of his usual vampire behaviors since rejoining the ranks of the undead. At least not onscreen anyway.

John: Wow! Could Quentin actually be dead? Of course not, but I'm looking forward to seeing where things go from here! 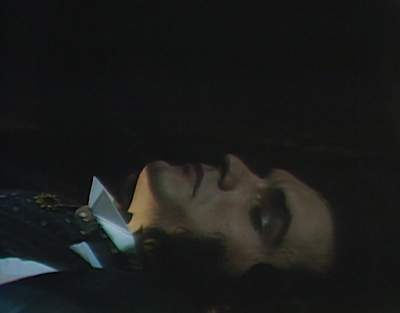 Christine: Angelique warned Barnabas that his presence in the past could change history, so there is a possibility that Quentin really is dead. He certainly looks dead. I am confused by his assertion that Jenny is his wife. Does that mean he married her while she was still married to Edward? I wasn't expecting that.

"She asks him if he still thinks she's pretty, and he says she is."

He's right, if you include pretty in a sort of classic "spooky chick" way. Which not everyone does.