Barnabas unlocks the tower room door and enters. He finds no one inside, and a damaged doll head in an empty cabinet. Behind him, he hears the door opening. He turns to see who enters... but there's no one there. The door slams shut. He says he knows Angelique is there. He tells her to appear before him. He assumes she is the one who has been living in the tower room. Suddenly the room is filled with her laughter, and she materializes behind him. She asks him to kiss her. He starts to says that the last time he was in the room... and she finishes saying she burned alive. She says her master's power is stronger than his flames. She says there is a way to change her—his love. He says that she put the curse on him. She says they're both strangers in a foreign century, and if he loves her, she can help him. 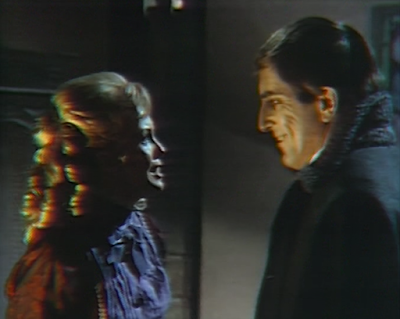 She says she has friends. He asks if she means Quentin, and asks if he knows about him. She says that Quentin is curious about him, and Barnabas says he is, too. Angelique asks how he plans to save David and find the secret of the werewolf. He can't believe she knows of the future events. She hugs him, and asks if they can begin again. He says he can never forget, and walks away from her. 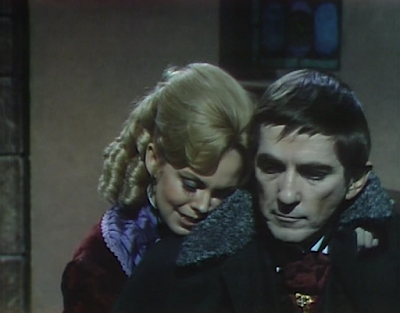 She says he needs her help. He says he came to find out why the ghost of Quentin wants David. Angelique says he has already changed things, such as the governess. She says that she can change things to his advantage. She adds that he may never return to his own century. She asks him to look outside, and says it's his last day in the past. She opens a window and the sun is setting, but in the sky. She then describes a darkened room with a casket. She asks who's in the casket. A robed figure opens the casket, but we can't see inside it. The person raises a mallet and stake, and hammers it down into the coffin. She closes the window, and Barnabas grabs her, and asks her who will try it. She disappears. 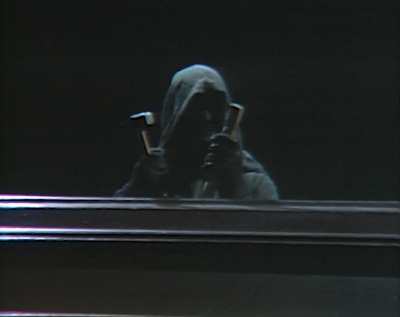 Quentin asks Jamison where Barnabas spends his days. He says he doesn't know. Quentin tells him spy school is now in session. Quentin says he was a spy for the police in Egypt, and tells Jamison not to ask him any questions. Jamison says that he may be a mad doctor, or a murderer. Quentin says they can use those people. He asks Jamison to go on a mission. He says he needs something that is the personal property of Barnabas. Hey tells Jamison to bring him Barnabas' cane. He says if the cane is in the house, then so is Barnabas, and the gypsies are lying about his whereabouts during the day. Quentin tells Jamison he's like his father. Jamison takes offense. He asks Quentin why he hates Barnabas. Quentin tells him that Barnabas hates him, and cursed him to being poor. Jamison tells him he won't get caught, and runs off. 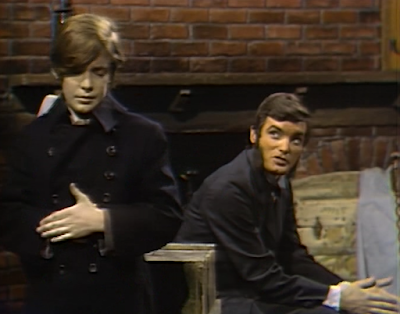 Quentin picks up a clay figure, and asks how he can make it look more like Barnabas. 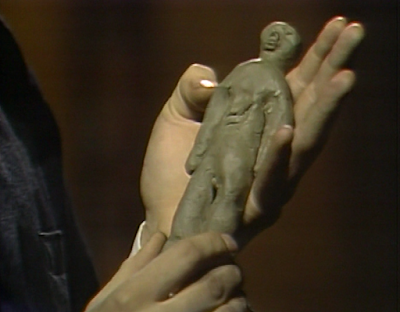 Jamison tells Magda he wants to play with Barnabas. She says he's in town. She tries to send Jamison away. Jamison finds Barnabas' cane. He then asks Magda if she ever put a curse on someone. He says he'd like to find out how they are done. Jamison then says he heard something in the basement. She grabs the cane from him, and sends him back to Collinwood. She watches through the window as he makes his way from the old house. 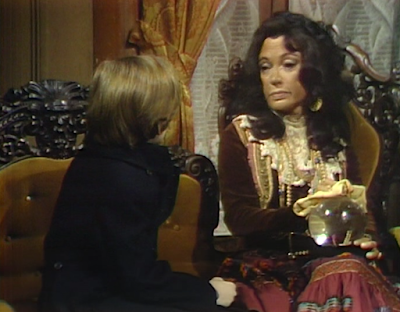 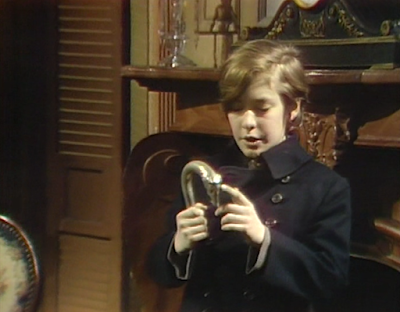 Quentin admires the clay figure and tells it that Barnabas has a few more moments to live.

Barnabas interrogates Magda about sending Rachel to the tower room. He notices his cane is missing. She says she just put it on the table, but can't find it.

Quentin admires Barnabas' cane. He tells Jamison that he must fight Barnabas in any way that he can. He takes a pin and is about to poke the clay figure but Jamison stops him and Quentin hypnotizes him. Quentin tells Jamison that he has the greatest power—innocence. He holds the pin over the clay figure. Jamison says it must be silver, and Quentin picks up Barnabas' cane. 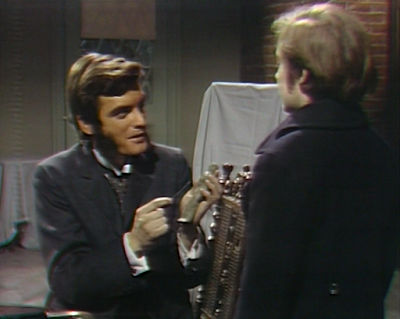 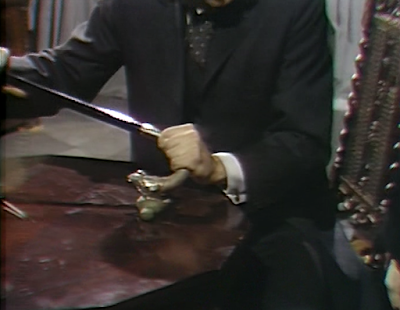 Barnabas asks Magda why Jamison would take his cane when he suddenly clutches his chest. Magda wonders if someone knows enough magic to make him feel this way, and runs off. 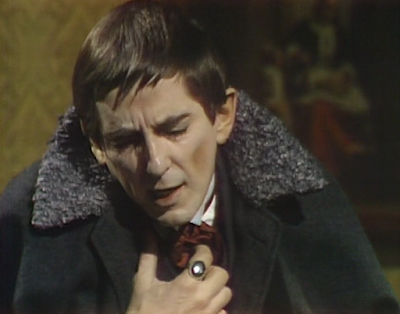 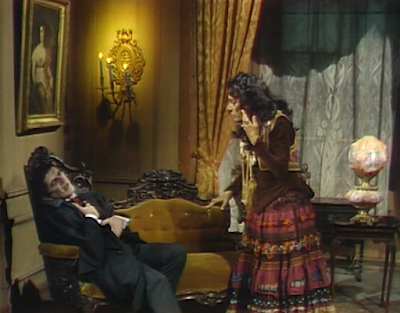 Jamison collapses. Quentin stands over him when Magda enters. He tells her to leave. She sees the mark of death on him, and a skull appears over his face. 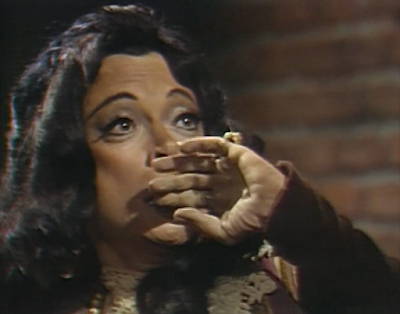 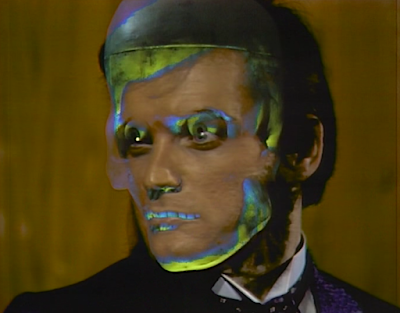 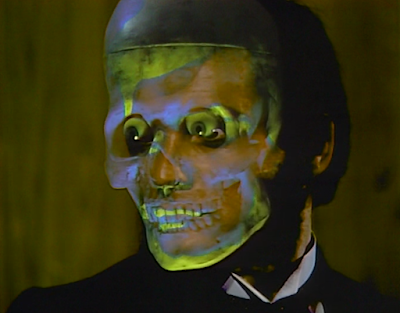 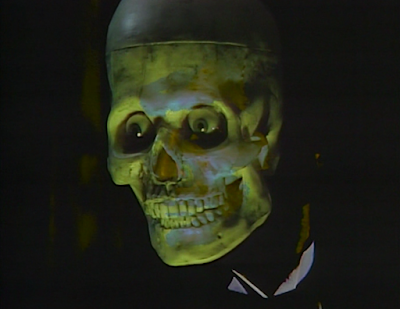 John: Oh, Angelique, even if you were being sincere with Barnabas, you understand you now have zero credibility, right? At least we've established that she is aware of future events as well as the past. So perhaps she will recognize that Evan resembles Nicholas the next time she sees him.

Christine: Angelique essentially tells Barnabas the way to destroy her is by loving her and yet he still can't bring himself to do it because he's not really getting how love conquers evil. If nothing else, didn't her master take out Nicholas Blair for the same transgression?

John: I think it's safe to classify Quentin's relationship with his nephew as 'unhealthy.' 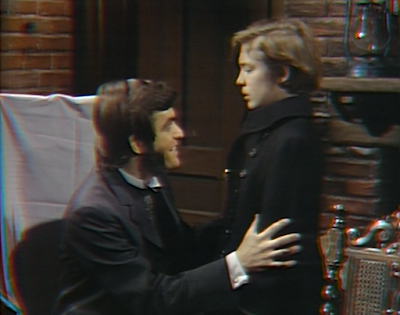 Christine: That is an understatement. He's not a nice uncle for sure to be using him for the power he adds to his black magic. Also, Quentin was an Egyptian spy? That's an odd story.

John: Wow! The Mark of Death never looked so good! Nice to see the skull with eyeballs again, and the resemblance to Quentin is uncanny!

Christine: Now that was a thing of beauty! I especially like how the flip top cranium stood out by not having the same neon glow as the rest of the skull. I know I shouldn't ask, but if silver bullets can kill Barnabas, and the silver wolf's head applied to a voodoo doll can cause him suffering, then why doesn't his cane cause him some sort of pain by itself? 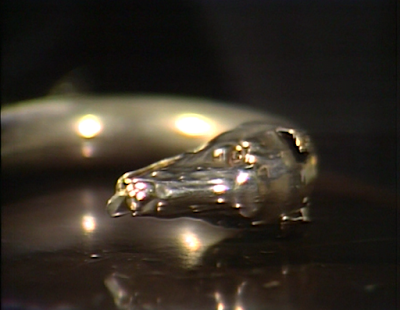