Quentin goes downstairs. He can still hear the heartbeat, and the lights go out. He follows the sound into the study and looks down at his grandmother's body—the source of the heart beating. Eyes open, she stares back at him. 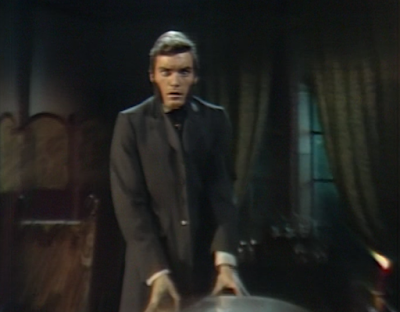 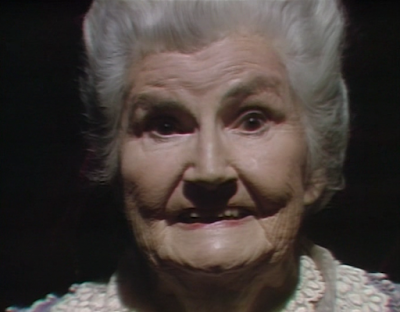 He rushes into his room and the heartbeat stops. He sits down in a chair and falls asleep. Hours later, he appears to awaken. He hears his grandmother's voice moaning and calling his name. The knob on his door begins to turn. The door opens and his grandmother comes into his room, smiling at him. She says that he shouldn't have taken her will. He says he didn't, and she says he had the child do it. He says that she's dead, and she says she will not rest until he returns it. She tells him to give back the will. He says she can't have it, and that she can't leave him with nothing. He grabs her throat and tells her that he's going to get his fair share. He notices that she's not in his hands, and her body is lying in his chair. 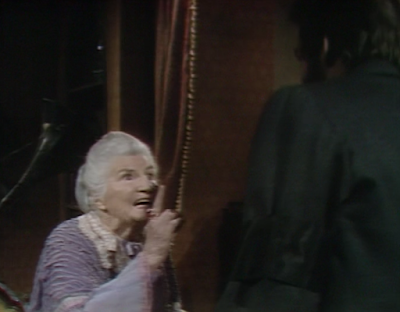 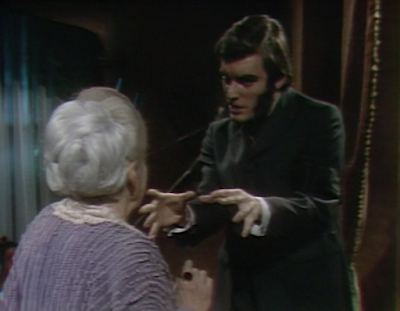 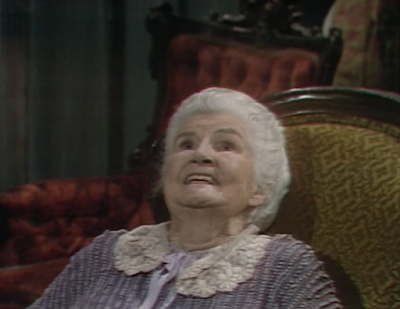 Quentin finishes closing up a grave. He says goodbye and good riddance, only to hear a heartbeat again as a hand reaches up from the grave. 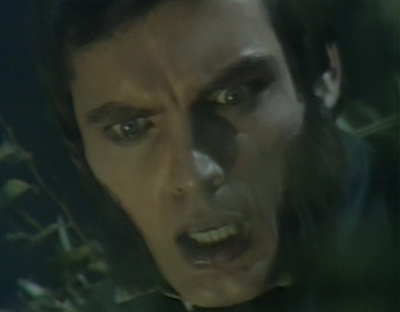 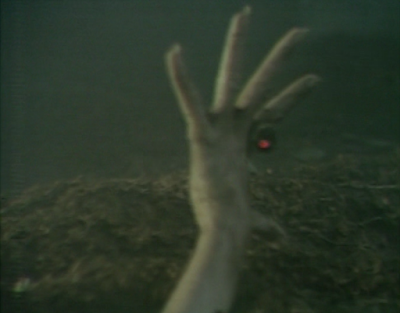 Quentin wakes in a start, realizing that it was just a dream, and his grandmother really is dead. He hears a knock at his door, and when he opens it Evan comes in. He asks what happened to his room, and he blames it on a mysterious caller. Evan asks if he has the will. Quentin tells him he's not sure they should go through with it now. Evan asks if Quentin wants him to be a pauper all his life. Quentin says his cousin Barnabas suspects that he has the will in his possession, and added that she wouldn't rest until he gave it back. He goes on to say that last night he was sure he could hear her heartbeat pounding through the house. Evan says it's ridiculous, and Quentin reminds him that he of all people should believe it, given his Devil callings. Evan asks if Barnabas has supernatural powers. Quentin says there's definitely something strange about him. Quentin says that he is sure Barnabas is an enemy. Evan suggests that they have a ceremony at their cottage, to summon a friend of theirs to deal with Barnabas. He tells him to bring Jamison, as a symbol of innocence. They arrange to meet at 8pm. Evan takes the will from Quentin, and tells him to stop worrying. He says that in a few weeks, he will be the master of Collinwood. 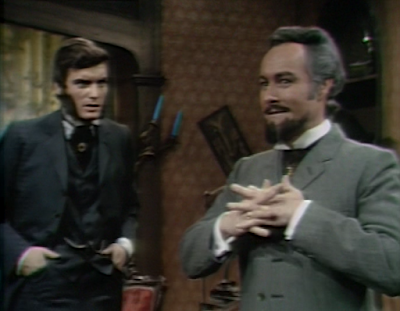 Sandor reviews the will. Evan asks how much it will be for him to forge the will. Sandor tells him that his price is $500 in gold. Quentin tells him that he's insane. Sandor reminds him that after he revises the will, it will seem a mere pittance. Sandor says it will take some time, and he leaves to get started on it. Quentin asks if he can be trusted, and Evan says that they don't have much choice. 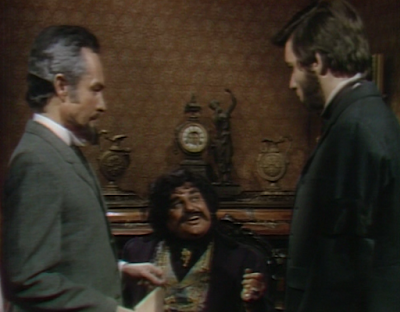 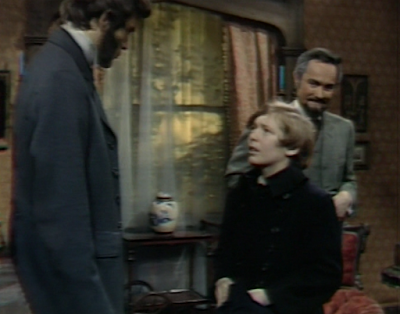 Sandor works on the forged will when Jamison enters the cottage. He says he didn't think anyone would be there. Sandor hides what he's working on, and asks Jamison why he stopped by. Jamison asks what he's doing there, and Sandor says that Quentin asked him to clean up. Jamison picks up a box and asks what's in it. He opens it and finds black candles. Sandor tells him it will be dark soon, and Jamison runs away, afraid. 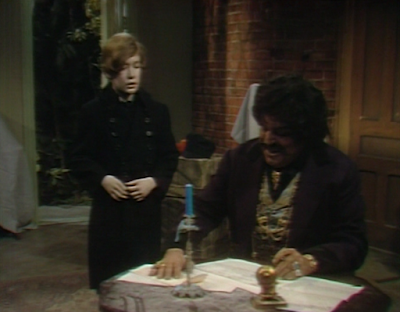 Quentin paces around his room when Jamison enters. He asks the boy how things went. He confirms that she was buried. Jamison asks if he's alright, and he says that he is now. Quentin says he's up for a long walk, and invites Jamison along. He says he has to be back in time for dinner, and Quentin says they will be, and adds that later he'll have a surprise for him. Quentin hints that they will look into the future. He asks Jamison to promise that he won't be frightened. He says that he has to keep it a secret, and Jamison confirms that he won't tell anyone. 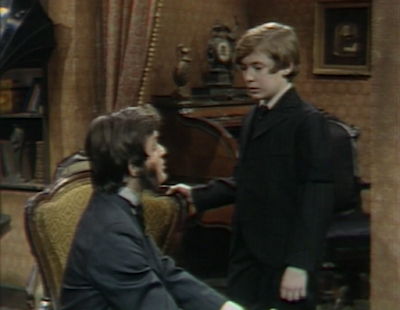 Evan asks Sandor if he's ready. He says he is. There's a knock at the door of the cottage, as Quentin and Jamison arrive. Evan tells Jamison where to stand, and asks him to look directly into the flames. Jamison is hypnotized. Evan holds a cup over Jamison's head and summons the powers of darkness to rise. He says there's an enemy in their midst who must be destroyed. He offers to pay with the gift of innocence. 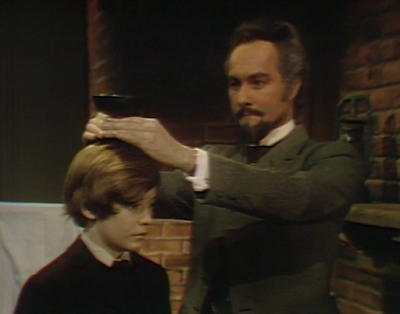 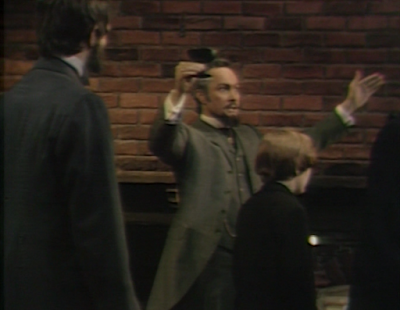 Jamison says there's a woman coming. He turns and runs off. Evan sends Sandor after him. Quentin tells Evan that they've gone too far. He points to the flames and in it they see the skull of a woman. 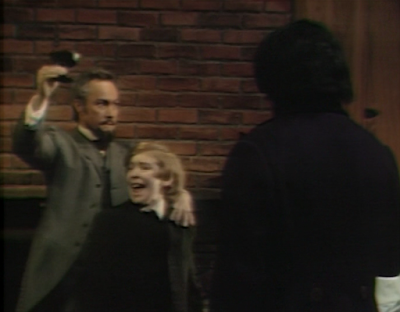 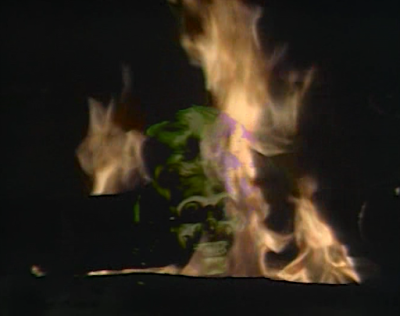 John: Gratuitous grandma alert! She's pretty darn creepy. When she chases Quentin around the room it reminded me of the elderly couple from Mulholland Drive!

Christine: That grinning granny was frightening! I think she was much scarier with a wide-eyed toothy grin than she would have been if she'd appeared angry, as one might expect.

John: It is a nice convenience that Evan would have devilish leanings. The beard and mustache certainly fit the bill. One must wonder if he's related to Nicholas Blair directly (beyond their satanic brotherhood). Do you think we might see a return of Diabolos at some point?

Christine: I wonder if Evan may actually be Nicholas Blair, operating under a different alias, much like Angelique did as Cassandra. Alas, I think the office of Diabolos has been closed, though perhaps another demon will be promoted to his position.

John: Ask and you shall receive! I wanted our pal Skully yesterday, and here she pops up today!

Christine: You may just be getting a good sense as to when the skeletons will come out after nearly 3 years of daily viewing. And how our wide-eyed Skully has changed since her early beginnings with the dream curse. Now she's got a big wig and a psychedelic effect. That plus grinning grandma, the hand reaching up through the grave, and the satanic ritual makes it a great Friday episode all around. Now, who do you suppose the evil woman in the flames that Evan has summoned to deal with Barnabas could possibly be?
Posted by John Scoleri at 6:00 AM