Gerard tells Julia that he has something that belongs to her, and she starts to say "My ... " and follows up with, "word." He says he found it in the playroom two nights ago, and found its mate on her dresser when he delivered her luggage. He points out that it can't be a coincidence. He asks who she is, and what she wants in Collinwood. She asks what gives him the right to question her. He says that Gabiel found it, and he could ask her. He asks if she was the woman Daniel claimed to see in the room, and she reiterates that she arrived today. He says when he saw the earring, he had a feeling it belonged to a woman who didn't dress as a woman normally would. She asks him if he was a psychic. He says not professionally. She explains that she found the other earring on the bureau in the room. He tells her that the mystery will be solved, and soon. Ben arrives, and she says she'd like to hear more stories about their father. Gerard excuses himself and goes upstairs. Julia tells Ben that Gerard suspects something. Ben says he can't find Barnabas' coffin, and there were attacks in the village last night. Attacks like those they haven't seen in Collinwood since 1797. Ben says there's one place he'd be sure to go, and he'll see if he can find Barnabas there. 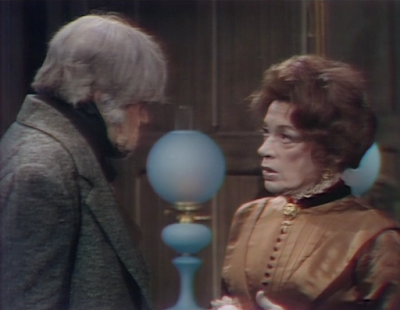 Barnabas goes into Josette's room in the old house. He speaks to her portrait, explaining to her that he must begin a new life, and telling her goodbye. He takes her portrait off the wall, and turns it to face the fireplace. He turns to see Ben in the room with him. Barnabas says he returned to the room for the last time. He will make an existence without Josette. Barnabas tells Ben he will not involve him this time. Ben pleads for him to talk with Julia from 1970. Barnabas says he does not share Ben's naivete. He says that she let Barnabas out of his coffin in 1967. He tells him he's not safe, and Barnabas says that word has no meaning for him. 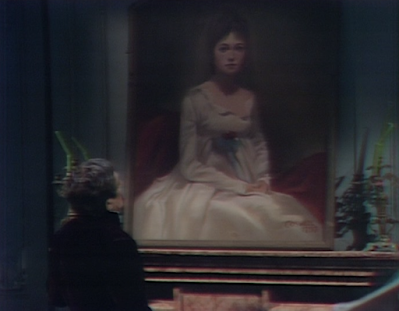 Gerard tells Leticia that Flora has written asking him to come see her at Rose Cottage. She calls him a heartbreaker, and he promises not to break hers. He tells her he made a new life for her bringing her to Collinwood. She says he gave her to Flora like she was a present. Gerard tells her that she's going to be famous — she'll be in a book. He tells her there's money to be made there, and they're not leaving until they get it. Julia enters, and Gerard introduces her to Leticia. Leticia says she needs to work on Flora's horoscope. 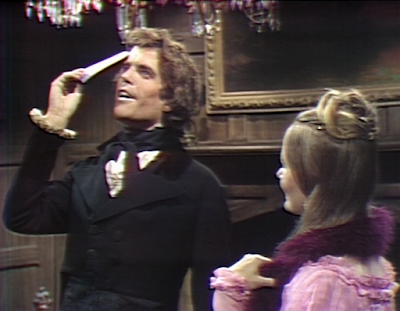 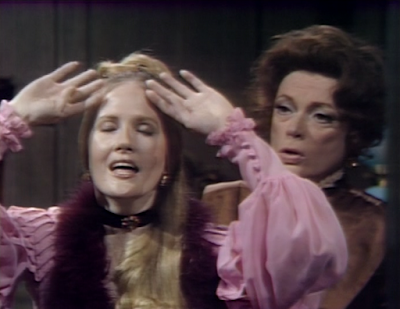 In 1970, Barnabas is sitting by the fire in the old house. Stokes comes to see him, and says he's sorry that Barnabas wasn't well enough to attend the funeral. Stokes says he shouldn't have gone to Europe, but he thought he had time to bring back the one man who could exorcise Gerard. He mourns the dead — Elizabeth, David, Daphne, Hallie... Barnabas says the creatures Gerard summoned from the grave prevented him from following Julia onto the stairs. He says he needs to find out where Julia went, and how to get there. Stokes says that if the stairs brought them from 1995, that must be where Julia is now. Barnabas says he's sure the stairs lead to the past, where this all began. He says the family journals mentioned Quentin building a time-traveling staircase in 1840. Stokes says he assumes Barnabas will try to use the I Ching again. 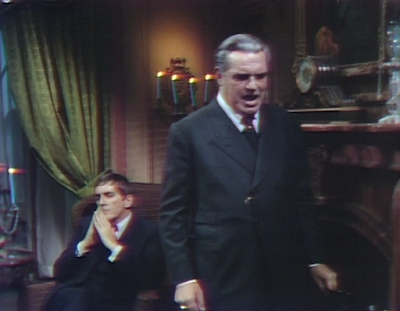 Carolyn comes in, and mentions her mother is away with David and Hallie. She says she'll spend the weekend at the beach house. Barnabas says they can decide that later. She then asks him what happened to Collinwood, and who the men were who set fire to it. She then says that was just a dream — a nightmare. She says she's going to go upstairs to pack a bag. She goes upstairs and Stokes says she must get to Windcliff. Stokes asks about the 'other' problem, and asks where he is. Barnabas says he's upstairs. 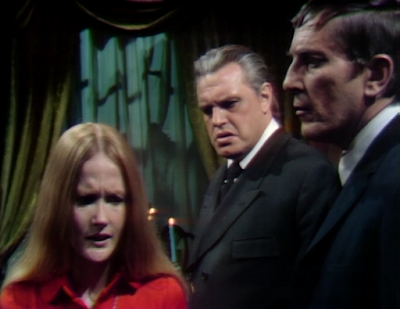 In Josette's room, Quentin prepares to put his head in a noose. Carolyn comes in and screams for Barnabas. Quentin says he must join Daphne. Barnabas and Stokes run in and Quentin attacks Stokes, blaming him for Daphne's death. Barnabas sends Carolyn away. Quentin says the children were dead, and Daphne died in his arms. He said he could have saved them. Barnabas tries to calm him, and Quentin says he won't return to Collinwood. Barnabas tells Stokes to take Quentin to Windcliff. 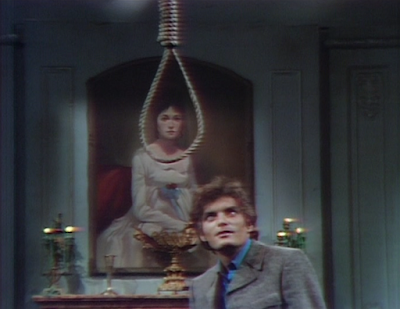 Barnabas picks up his I Ching wands. Stokes tells him Quentin will be better off at Windcliff. Barnabas says he'll be as lost as he is now in 1995. Barnabas asks Stokes to take care of Carolyn. Stokes reminds him if the I Ching works, someone must stay in the old house to protect his body. Barnabas says Willie Loomis will. Stokes goes to get Carolyn to take her to the beach house. Barnabas goes into the secret room and tells Roxanne (through her coffin), that she'll be safe. He says he's going to go back in time to try and change her fate. 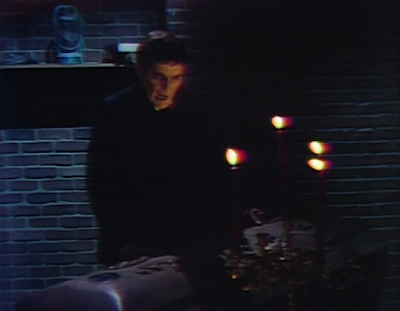 Barnabas tosses the I Ching wands. Stokes says it's the 49th hexagram. Stokes tells him to visualize a door with that hexagram, and concentrate on it until the door opens. Barnabas does. He says it's opening. Stokes tells him to rise and go through the door. Barnabas sees a tombstone showing that Julia died on October 6, 1840. He says it can't be. 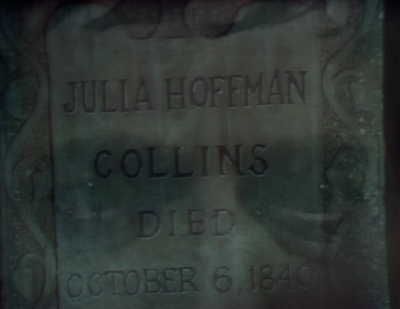 John: While it was cool to pop back to 1970 (one last time?), I'm a little disappointed that they ignored some of the major questions, like: how did Barnabas escape the clutches of Gerard's zombies? Where's Gerard now, since we know come 1995 he'll still be hanging around the place? How did Elizabeth die, because as far as we know, she wasn't there the night of the destruction (and wasn't she with Roger, meaning that he too should be dead)? While it's obvious the writers could, through the 1840 sequences, alter the future to save all who died in 1970, it certainly seems more likely that they saw the writing on the wall and knew that the end was near for them to basically leave present day in what appears to be an irrecoverable mess.

Christine: Barnabas escaped because he is undead, and therefore cannot be killed by zombies. I imagine Gerard is still lurking about Collinwood with his zombie friends. I was also surprised to hear that Elizabeth died. I thought that was a very lazy and unacceptable piece of writing for such an instrumental character. I don't know if the writers knew the end was near, but they may have sensed Dan Curtis was exhausted and challenged to squeeze out new storylines. It could be that returning to the past was meant to be Barnabas and Julia's only way of altering history to prevent the destruction of Collinwood.

John: So despite all of their efforts, it looks like 1995 will play out just as it was when B&J dropped in; making their attempts to change the future a complete and utter failure. In retrospect, one has to wonder why Gerard chose to hold off on exacting his revenge on Collinwood (for reasons as yet to be determined) for 130 years... Why wait so long? Perhaps before we're through, we'll get a scene where Gerard declares that in 130 years, he'll get his revenge! And what are the chances we ever hear more about the mysterious European who could have exorcised Gerard... perhaps a descendant of Count Petofi?

Christine: After all Quentin has gone through in his lifetime, it's difficult to believe that these catastrophic events, while traumatic, would cause him to completely break from reality.
John: Damn! Barnabas makes it clear that he isn't even going back in time to save Julia — he's going to save his new girlfriend, Roxanne! Of course, he's feeling guilty now that he sees Julia is on deck to die, but really, whether she lives or dies, as long as he can get his hands on Roxanne, he'll likely be happy in 1840!

Christine: That's not what I heard him say at all. He told Stokes he was determined to risk using the I Ching to find his way back to save Julia, as well as change history to prevent the destruction of Collinwood. Granted, he also wants to prevent Roxanne from becoming a vampire, though that may be hard to do if it turns out he is the one responsible for that happening. It was quite unexpected to hear 1840 Barnabas say goodbye to Josette and assert he must begin a new life without her, when all other Barnabas reincarnations professed undying love and obsession for her. Incidentally, it is always amazing to see that Barnabas tosses the desired 49th hexagram of change on the first try every time.
Posted by John Scoleri at 6:00 AM

Finally,, sombody that asks the same questions I asked when this episode originally aired in 1970. (I've watched the DVDs several times since.)