We're told that the missing children have returned to the old house, and Barnabas is questioning them while we see Julia review Quentin's diary for information. Barnabas comes downstairs and says if the children have any information they're concealing it well. He says they were in the woods for days, and were exhausted and hungry. He asks her about Daphne and Carolyn, and Julia say she gave Daphne a sedative, and Carolyn was gone when she came downstairs. Barnabas says he's worried that if they don't find out what happened to Quentin before the night is over, it will be too late. He says Carolyn might have helped them, but she's gone. Julia says the funeral she referred to must be Quentin's. She shows him Quentin's diary on this day in 1840, and points out that it contains his last entry. Barnabas assumes she's suggesting that he died on this date in history. He says there's one person who can possibly help them. 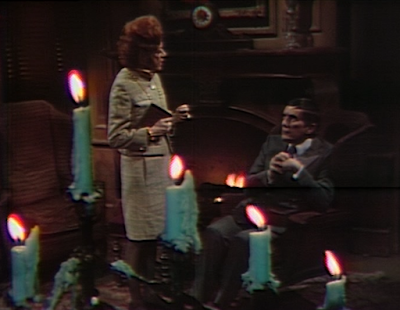 Sebastian watches over Maggie as she has a nightmare. She wakes up screaming, and is surprised to see him. She says the bad dream is always the same. She sees heavy chains wrapped around an object, but she can't make out what it is. She says she hears a woman's voice calling her name, begging her to come and free her. He asks if she see's the woman, and she says she only hears her voice. She says she feels sorry for her and wants to help her. Sebastian yells that it doesn't have any meaning, and she asks why he's so upset. He tells her that she needs to get out of Collinwood. He explains that she can't even do her job, but she says she needs the children. 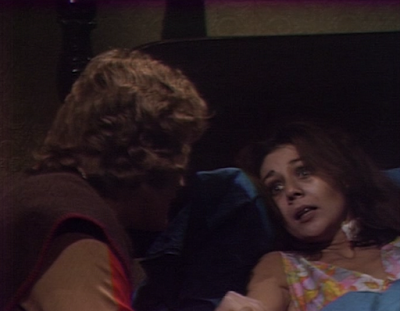 Barnabas and Julia arrive at Collinwood, and he goes to call Sebastian when he finds an old death notice for Quentin dated 1840. Barnabas says that Gerard left it for them. Julia says she can feel his presence. Sebastian comes downstairs, and says he wants to talk to them about Maggie. He says he wants her out of Collinwood. He says Roxanne is going to get out of her coffin. He explains that Maggie told him about a dream of going to the old house and letting Roxanne out. Barnabas says he suspected something like this might happen. Sebastian asks how he would know. Barnabas tells Sebastian that he agrees with him, and they will take Maggie away tomorrow. He says that they need his help with Quentin. Julia says he may be dead. Barnabas asks Sebastian to use his powers to find out where Quentin is, and he agrees to help if they promise to get Maggie out of Collinwood. They do. 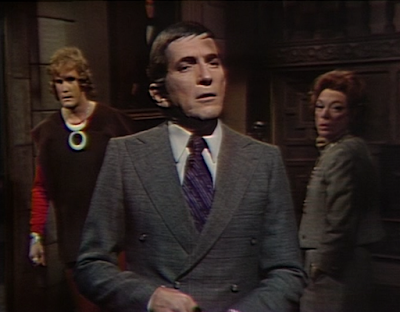 Sebastian uses his power and sees a high window in Collinwood, where a green flag is waving. Julia says it's Gerard. Sebastian then describes a cemetery, with the earth rumbling near the graves. Barnabas asks if he sees Quentin. He says he does not. 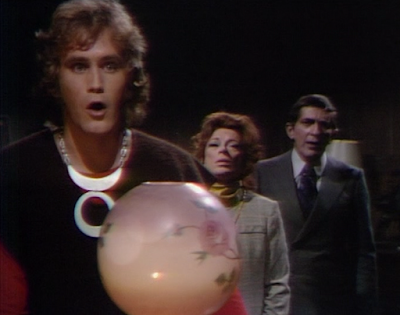 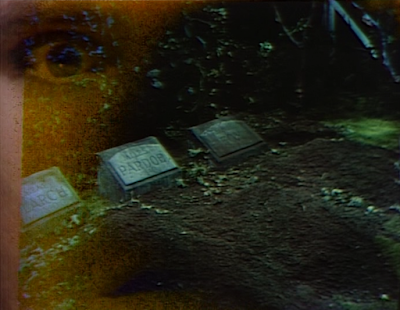 He then sees Maggie escaping Collinwood, which is in flames. He then sees her arriving at Roxanne's coffin and setting her free. He says he knew she was going to set her free. Julia says she doesn't know what the vision means—the green flag and the rumbling graves. Barnabas asks when this is all going to happen, and Sebastian tells them that it's going to happen tonight. Barnabas tells Julia they must find a way to stop Gerard. He says the murder precedes the destruction, so they need to see that Daphne stays alive. Sebastian asks about Maggie, and Barnabas says she must got to Windcliff. He goes upstairs to get her. 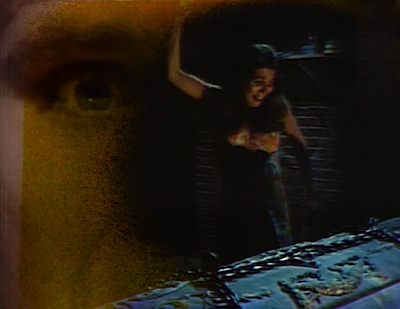 Maggie asks Barnabas what he's there for. He tells her that Julia thinks she should go to Windcliff for treatment, whether she likes it or not. He asks her to trust him, and helps her out of bed.

Sebastian doesn't understand why Julia wants to send Maggie to an insane asylum. Julia says she'll be safe there, and once she's well, he can take her away. Barnabas comes downstairs with Maggie. Maggie says she needs to see Carolyn. She says Carolyn gave her a box to give the children, and Julia takes it to give to them. Barnabas tells her that she'll be herself again soon. Sebastian takes her out of the house to go to Windcliff. 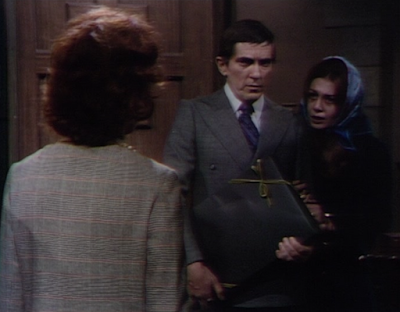 Julia looks at the box and begins to open it. Barnabas asks what she's doing. She opens it and it contains the clothing the children were wearing in 1995. Barnabas realizes that if they don't prevent it, they're destined to die in these clothes tonight. Julia is frantic. Barnabas says the children must be kept safe, and out of the clothes. Barnabas says they will burn the clothes, but they turn to get them and they're gone.

Maggie is in a convertible with Sebastian on their way to Windcliff. She tells him he has to turn around. She says she belongs at Collinwood. She says if they keep going, she'll never see Collinwood again, or any of the people she loves. He tells her it will all be fine and puts his arm around her. 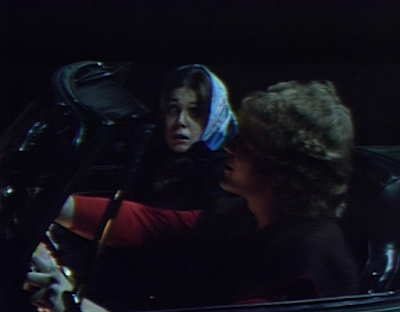 Barnabas and Julia are relieved that the children are safe. Barnabas tells her to relax in the drawing room while he looks for the clothes. Julia hears a heartbeat, and wonders where it's coming from. She hears it coming from the secret room, and realizes that Roxanne is trying to call one of her victims. She opens the panel and the noise doesn't get louder, so she assumes it must be something else. Barnabas comes downstairs and also hears the heartbeat. He thinks it's Roxanne and she says she already checked. Julia says it's coming from upstairs. They ascend the staircase together.

Barnabas and Julia go into the room with Quentin's portrait. Julia says that he's still alive. Barnabas says he's either been taken prisoner and is close to death — or Gerard has buried him alive! 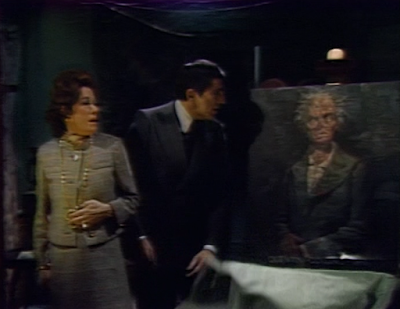 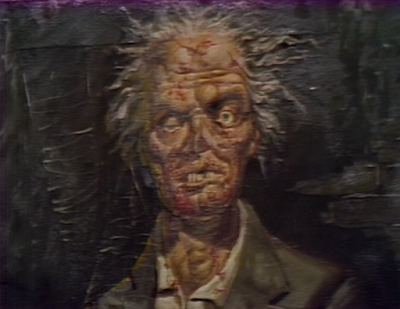 John: Boy, the exposition in the first few minutes makes it seem like they decided to cut a week out of the show to move the 1840 flashback up! What a way to pick up from Quentin being buried alive!

Christine: Won't Roger and Elizabeth be surprised when they finally return home to find everyone gone?

John: Funny how the biggest set-piece in Sebastian's vision, Collinwood in flames, was the only one we didn't get to see. I guess they blew this week's effects budget bringing a convertible into the studio (for the least convincing poor-man's process shot that I've ever seen).

Christine: They certainly didn't put as much effort into it as they did Joe and Sam's trip to Windcliff, where branches were waved over the car to make it appear as though they were going somewhere. Sebastian confirmed that Windcliff is no walk around the block, despite the fact that many of its patients make their way back to Collinsport on foot fairly quickly, when he told Maggie they'd been driving for an hour and a half.

John: Ah, yes. The good old tell-tale heartbeat... the standard indicator when someone has been buried alive! Of course the odds of Quentin still being alive when they find him seem pretty thin. How they plan to save Quentin, Daphne and Collinwood in one night when they haven't had any real successes since returning from 1995 is beyond me...

Christine: Don't forget David and Hallie, who are probably decked out in period clothes already. In reflecting back on all of Barnabas and Julia's schemes and capers, they have never been very successful. It could be they were both cursed the night they conspired to murder Dr. Woodard.

This was Kathryn Leigh Scott's last episode. She got pregnant and went to Europe or something like that.

You would have thought that Gerard would have been aware of Quentin's portrait by now. He could easily destroy it and Quentin would either get old quick and die or turn into a werewolf. Unless the portrait itself is indestructible, they never really explained how it survived the fire in 1897. Funny thing, the original Quentin would have been 89 or 90 years old when that portrait was painted. If the portrait was of himself, that's what the original Quentin would look like in 1897, minus all of the gross stuff and disfiguration and his gray hair would look a lot better.

Thanks for sharing that news, Billy. KLS will be missed!

No one is more sad to see KLS leave than me. I don't believe she ever had any children, but she did move to Europe for awhile with her husband at the time, Ben Martin. She's still beautiful at age 77.

I agree that Julia and Barnabas are bumbling at best. Sebastian tells them exactly what's going to happen and the first thing Julia does is toddle off to make a phone call? Meanwhile, Barnabas is brooding over his chained-in vampire girlfriend. No wonder Collinwood is doomed!

If you haven't been to Kathryn's website, she has tons of great deals on signed DS books and photos (as well as her many books written since) https://kathrynleighscott.com/