Julia goes to the mausoleum. She realizes that she should be at Collinwood, but she's convinced Barnabas is summoning her. She goes inside and wonders if it's just her imagination. She enters the secret room, where Barnabas' coffin is chained up. She wonders if his spirit has made the journey through time, knowing that if it hasn't, he won't know her. She speaks to him through the closed coffin, and calls for his spirit to reach out to her. She picks up a rock and smashes the locks. 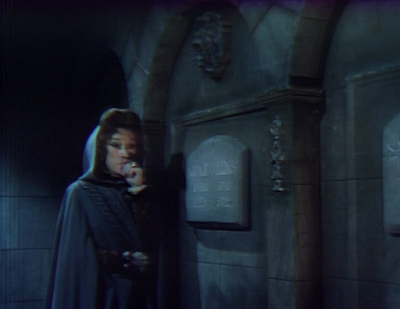 Gabriel is examining the earring when Gerard walks in with Flora's book. Gabriel tells him that he's to go to Rose Cottage to see Flora once he's done with the book. He says the book is fascinating. Gabriel tells Gerard he only says what he thinks when he's angry. Gabriel says he has decided that Gerard does have special powers. Gerard asks why he laughed at him. Gabriel says his statement about the earring was perplexing. Gerard asks where he found it, and Gabriel responds that he should use his powers, and then says he found it in the children's playroom. 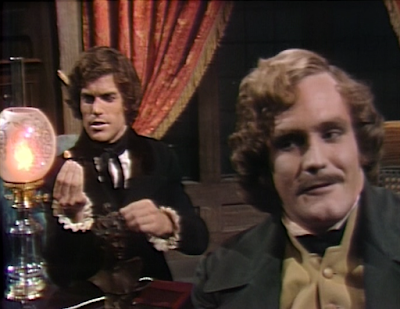 Julia undoes the chains on the coffin. She lifts the lid, revealing Barnabas inside. He looks at her and she tells him who she is. He grabs her throat, and says that no one must know his secret. Be walks in and tells him to let her go. He says she's a friend. Barnabas comments on how old Ben looks. Ben says he never thought he'd see him again, and tells him it's 1840. Barnabas asks if he told her about him. Ben tells her to leave, and reminds Barnabas that he needs his help. Julia leaves. 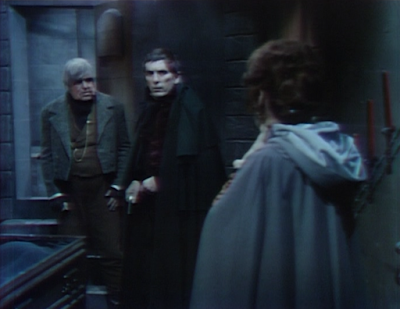 Barnabas asks about his father, and Ben says he's been dead for years. He says that Daniel is an old man now. Ben says Julia says she came from the future, and she knows him there. She says that he learned a way to spend his spirit back in time, and she was hoping he would know her. Ben suggests that he get back into the coffin. Barnabas says he can't do it again. Barnabas says he cannot stop the craving, and runs out of the mausoleum. Julia steps out of the shadows and re-enters the mausoleum. Ben says that he couldn't stop him. Julia says that if he's caught tonight and destroyed, her Barnabas will cease to exist! Ben says she has to go to Collinwood and prepare them to accept Barnabas' in case anyone remembers. 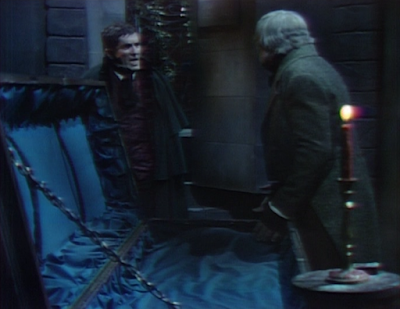 Samantha is walking in the woods when she hears someone and runs screaming.

Samantha returns to Collinwood and tells Gerard that a man in the woods was chasing her. Gabriel asks if she saw the man, and Gerard offers to go investigate. Gabriel tells her the police are combing the area, because a woman was attacked by the cemetery, bitten on the neck. Samantha goes to talk to the servant who told him the story. Gerard asks Gabriel how he wants to use him, and Gabriel says he doesn't know yet. He wheels out of the room. 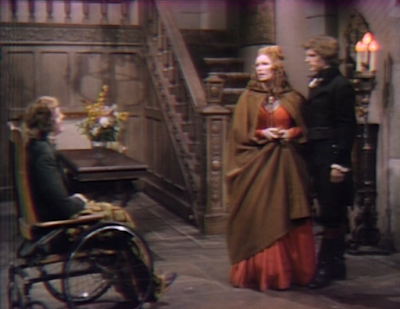 There's a knock a the door. A woman introduces herself as Julia Collins, and asks to come in. Samantha invites her in. She says Gabriel is the authority on the Collins family. Julia asks her if her brother is there. Gabriel asks who her brother is, and she says Barnabas Collins. She says there appears to be a mistake. Gabriel invites her into the drawing room. She apologizes for arriving unexpected. Samantha introduces everyone. Gabriel asks her if Barnabas is in Collinsport. She says she was to meet him there. She explains that Barnabas lives in England, and she lives in Pennsylvania. She says that she wrote them. 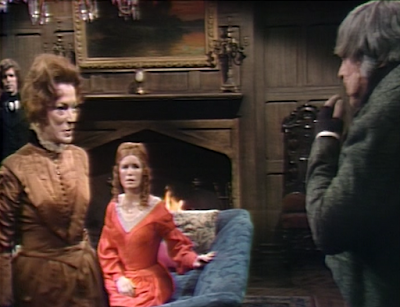 Ben comes in and asks about Barnabas. Samantha introduces herself to Ben and says she heard all about him from her father, because the two were good friends. She says her brother looks just like her father. Gabriel says if he was head of the household, he'd bring out champagne, but they have none. Samantha fixes everyone Sherry. Gerard offers to help with her luggage. She says she's sorry Barnabas isn't there, as he's wanted to see Collinwood again. Gerard presses her on 'again,' and she explains that they felt as if they had been there, from all they heard from their father. 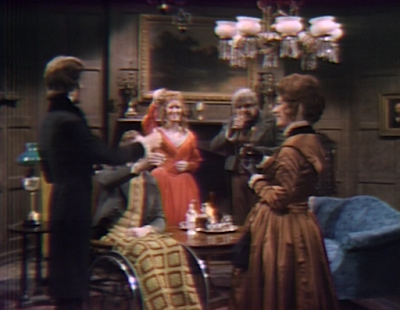 That night, Julia meets Ben in the foyer. She says they've got to chain Barnabaas up again. They return to the mausoleum, and find the coffin is gone.

Gerard contemplates how the earring found in the drawing room two days ago matches one found in Julia's bedroom. She returns home, and he asks if she's heard from her brother. She says she has not. He asks her when she last saw her brother, and she says not since she came to America. He asks her about places in Philadelphia, but she explains she never goes to the city. He says he has something that belongs to her, and she starts to say "My ... " and the says, "word." He says he found it in the playroom two nights ago, and found its mate on her dresser. She asks what he was doing in her room, and he says he delivered her luggage. He points out that it can't be a coincidence. He asks who she is, and what she wants in Collinwood. 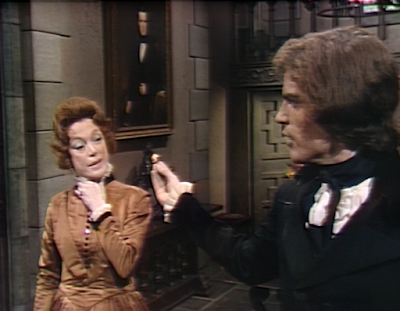 John: A tracker is probably excessive, but is this only the third time that Barnabas will be introduced as a long-lost cousin from England?

Christine: I believe that is correct, though it is hard to keep track these days with all the comings and goings through time.

John: Once again, we find that Julia is not fast enough on her feet to withstand the questioning of people suspicious of her stories. She really needs to stop traveling through time if she can't get her stories straight.

Christine: She was doing so well upon her arrival, too, though I'm not sure that awkward hug with Ben Stokes was fooling anybody. 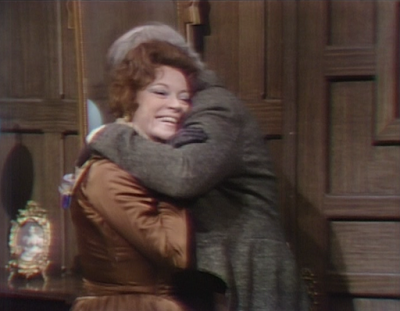 John: If we hadn't spent all that time with Grimacing Gerard, I'd find him to be an interesting protagonist. But I assume his evil ways are yet to be revealed, right? I mean, he can't really be a nice guy who was wronged by the Collins clan, and therefore justified in bringing about its destruction 130 years in the future, can he?

Christine: We shall see. Do you suppose Barnabas lugged his coffin over to the basement of the Old House? I wonder how Julia and Ben intend to chain him back in his coffin.

The irony being while it's the third time Barnabas will be "the cousin from England," in the chronology of the series it's the first time as they are in 1840!

I do wonder if the show had gone on, if there would have been a future where the family history books would have mentioned one of these Barnabas Collins cousins from England!