Julia exits the staircase, and is standing in the door of the playroom. She sees Carrie, alive, wearing period clothes. Julia realizes that she's in 1840 Collinwood. A man rolls up in a wheelchair. Gabriel Collins. He asks Carrie why she's still up. She asks that he not interrupt his grandfather while sleeping. He reminds her that she and her grandfather are guests, and she should not presume to tell a Collins what to do. He tells her to go to her room. He says she's been spoiled by everyone else since Tad left the house. He tells her to open the door for him, and she does, pushing him into the room. Julia continues to watch from across the hall. 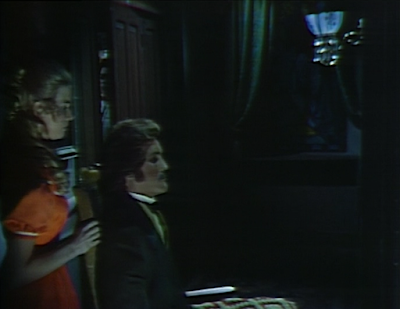 Samantha Collins sees her in the hall and asks her what's wrong. She realizes that its Gabriel. She adds that it's Quentin's fault that's the way he is. Carrie asks if she'll talk to Gabriel. Samantha says she knows why Gabriel wants to see Carrie's grandfather. She asks Carrie to join her in the playroom. They notice the door is open. Samantha tells Carrie that she loved Tad so much. They step into the playroom and look around. Carrie lights a lamp. Samantha says she stayed in her room all evening knowing that she had to do this tonight, for her own sake, but now she's afraid to look. Julia listens from the shadows. Samantha says the room is filled with toys that will never be used again. She bemoans letting Quentin take Tad on the boat, knowing he was going to die. And now both Quentin and Tad are dead, and she's in a room surrounded by toys. 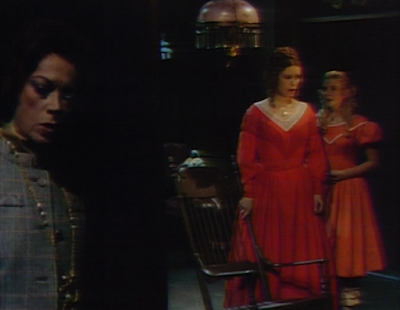 Gabriel wheels up to the bed of Ben Stokes. He wakes him. Stokes asks if Gabriel's father is doing worse. Gabriel tells him that he wants Ben to tell his father that Quentin is dead. Ben says he won't tell Daniel that Quentin is dead for Gabriel's sake. Gabriel says he'd tell him that he died, quite willingly. Ben gets out of bed. Stokes points out that Gabriel is jealous that all of Quentin's money went to Samantha instead of him. Gabriel tells Ben that he's going to go into his father's room, tell him that Quentin is dead, and then be a witness as he changes his will so that Gabriel will inherit everything. Gabriel asks Ben what will happen to his granddaughter when he dies. Ben says that Quentin and his father said she could stay. Gabriel points out that once his father is dead, it will be up to him. 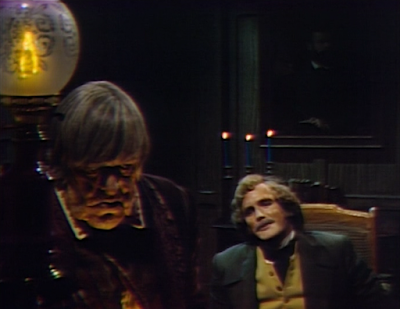 Samantha plays with a toy that she gave to Tad on his sixth birthday. Carrie tells her that she should wait; her grandfather says that things look better in the morning than they do at night. She asks Samantha to go to her grandfather's room and talk to Gabriel. She agrees. They leave, and Julia realizes that she can go to Ben Stokes for help. She wonders what happened to Barnabas. 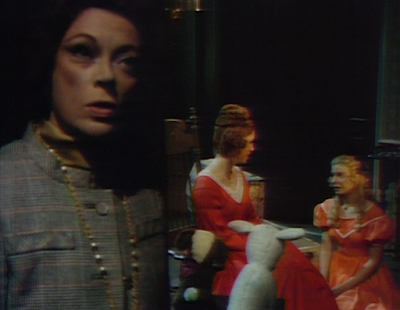 Samantha finds Gabriel in Ben's room. She says she knows where he sent Ben. Gabriel says she never cared about anyone but herself, not even Quentin. 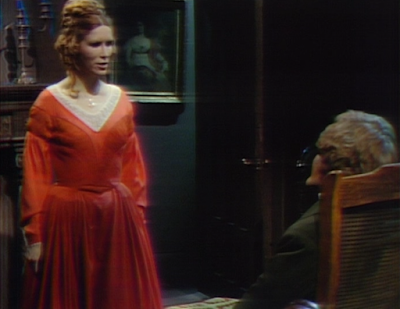 Julia sneaks out of the playroom. She goes across the hall into Ben's room. It's empty. She notices Barnabas' portrait on the wall. She hears people coming and she hides. 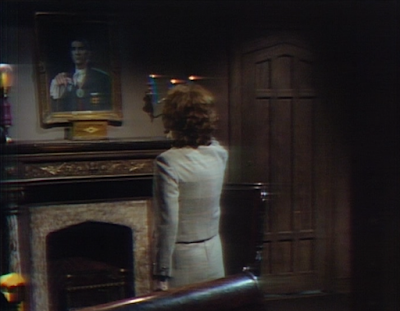 Samantha returns with Ben. He tells her that he's only done one thing harder in life than telling Daniel that Quentin was dead. She asks him if the will will be changed, and Ben says no. Samantha leaves, and Julia steps out of the shadows. She introduces herself to him as a friend of Barnabas. He assumes she's a creature like Barnabas, and she tries to explain that she has come from a different time. She says that Barnabas was alive in 1970, and he tells her she's mad. 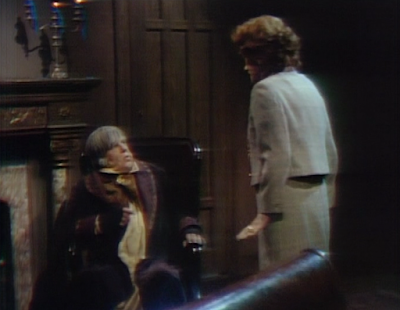 Gabriel plays a game of chess by himself. Samantha finds him in the drawing room, and tells him that he's failed. She explains that Ben told Daniel, and the will isn't going to be changed. Gabriel swipes the chess pieces off the board. 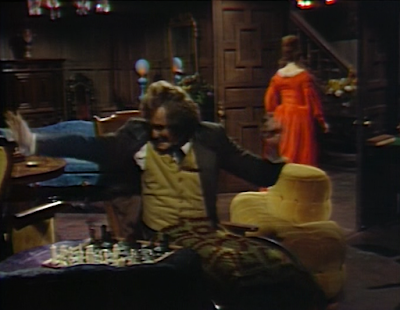 Ben doesn't understand what Julia is saying, and says she's some sort of witch. Ben says he knows Barnabas is chained in his coffin right now. There's a knock at the door, and Julia begs him to not give her away before hiding again. Carrie comes in and asks him who he was talking to. He says he was talking to himself. She says he was talking to Gabriel, telling him all the things he meant to say but couldn't. He tells her she's right, and sends her away. Julia comes out, and he says he'll hide her in the playroom tonight, and find her clothes tomorrow. Julia asks him about Daphne, and he doesn't recognize the name. She says she was the children's governess. He says her name is Hortense. She asks if Gerard Stiles is there, and he says that he is, and that he was the one who brought them the news about Quentin and Tad. 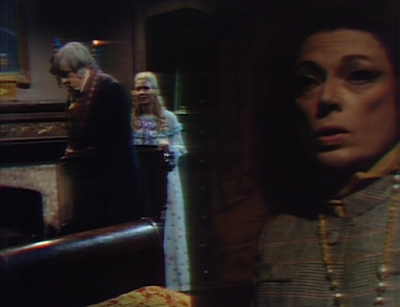 Gabriel writes a note, asking someone to come to his room after they return from Rose Cottage. He seals the letter with wax, and addresses it to Gerard.

Ben sneaks Julia into the playroom. He tells her to stay in the room until tomorrow.

Samantha runs downstairs and tells Gabriel that she went to the tower and his father has broken out — he's gone. Gabriel goes and calls for someone to wake the servants. Julia hears Gabriel screaming. 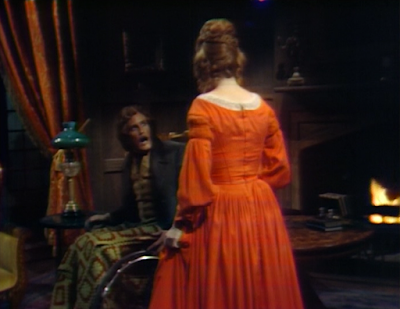 Gabriel wheels to Ben's room. Julia comes out of the playroom to see what's happening, and is grabbed by the throat. 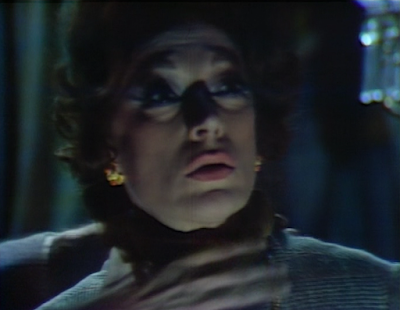 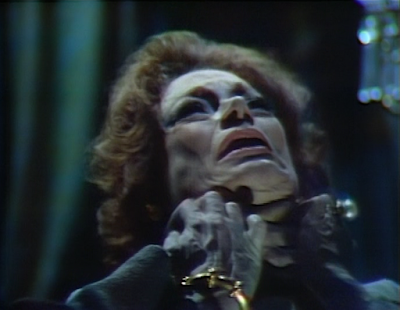 John: Well, the transition to 1840 wasn't quite as painful as I had feared. At least there are a few familiar faces with Carrie and our (really) old pal Ben Stokes as we get familiar with Samantha, Gabriel and the mysterious Daniel Collins. And so far, Samantha is the only one without a familiar face. Now that we can basically trash our all but useless Catastro-tracker, maybe we should we do a countdown to the first time we hear Gerard's speak... 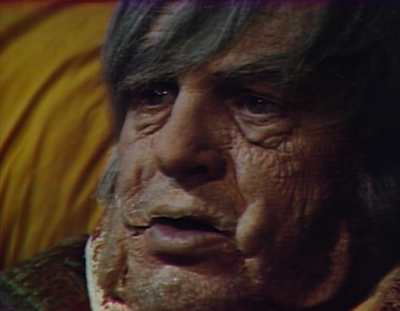 Christine: Technically, we did hear him speak, since he was responsible for the opening narration in yesterday's episode. Cool to see trusty Ben Stokes, but boy, he sure is crusty! Is that a boil on his cheek? It's pretty awesome that the best Collinwood portraits are housed in the room where he stays, with Barnabas' portrait over the mantel, and Isaac's portrait on the wall near the bed.

John: So how exactly does wheelchair-bound Gabriel get around Collinwood, particularly upstairs, and so qiuckly? The house in present day (1970) isn't built to ADA standards — let alone 1840 Collinwood. 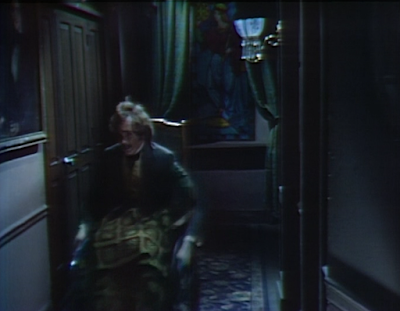 Christine: How indeed? We are off to a good start in 1840, with compelling characters and intrigue all around. What sort of accident put Gabriel in a wheelchair? Are Quentin and Tad really lost at sea, or is Gerard already up to no good? Will Daphne be arriving to take over as governess, or has something happened to alter past events?

John: Barnabas is Collinwood's number-one throat-grabber, but I'm willing to bet that it's not his hand grabbing Julia's throat, since I'm not expecting 1840 will have a dual-Barnabas infestation. Perhaps we'll get an authentic Barnabas throat grab when Julia and Ben free him from his 1840 coffin prison!

Christine: I'm assuming the grabby hands belong to Daniel. Who do you suppose will be playing that role? I'm hoping that Louis Edmonds will be back from vacation to take on the job. Does the Stairway to Time come and go like the parallel room? If Barnabas hasn't been consumed by the dead yet, can he stand in the closet until the stairway appears and rejoin Julia? He was able to travel through time in his coffin once before. Is it possible he can do it again?

50 years ago, the feature film House Of Dark Shadows was in wide release around the country. I decided to watch it again last night and I really enjoy how it zips right along. It was also cool to see all the familiar cast members from the TV show, including a few in different parts.

John & Christine, was just wondering if you ever plan to do a commentary on both this film and the other one (Night Of Dark Shadows) that came out in 1971?

We ARE planning to do something on the films... though in the absence of a nationwide release date in 1970, didn't want to get bogged down in the discussion of when the official 50th anniversary should be celebrated. I'm hoping we'll have something on HOUSE up by Halloween, close to the October 28 Los Angeles/New York wide release dates reported on IMDB.

And I expect that we'll cover NIGHT ahead of its August anniversary next year, sometime after we wrap up our look at the original series.

Crazy to think that we're approaching the end of our 5-year mission!

Thanks for responding, John. I don't know how the story got started that "House" was released at the end of October 1970. My Mom took me to see it on September 19, 1970 in the small town of Winona, Minnesota. A quick check at newspapers.com shows that the film was indeed playing around the country at that time. Sure, it may have gotten a boost at Halloween, but in many markets it was already gone by that time.

Anyway, looking forward to your comments on it!

Here's a post from The Collinsport Historical Society that sheds a little light on the differences in release dates. http://www.collinsporthistoricalsociety.com/2015/09/what-minute-when-did-house-of-dark.html

Thanks for hanging in with us, Paul, and for wanting to hear our comments on the movies. I haven't seen "House" yet, so I look forward to experiencing it for the first time.