David and Hallie start to leave the playroom, and then hear Carrie's voice, telling them not to go. She tells them to look in Rose Cottage to find out what happened to them. She tells them to look through the window. They look through the window and see themselves in Rose Cottage. Carrie tells them that now they know what is to happen to them. Hallie asks how they got in there, and what does it all mean. David says that it's what's going to happen to them. They'll be trapped in Rose Cottage forever, and they can't do anything about it. Hallie starts to cry, and says they have to try and tell someone. She says Barnabas and Julia are still researching the books, and may find the answers without their having to tell them. The carousel starts to spin and play music. David tells her to listen to it. He says he's not afraid any more. He says they might even like it at Rose Cottage. 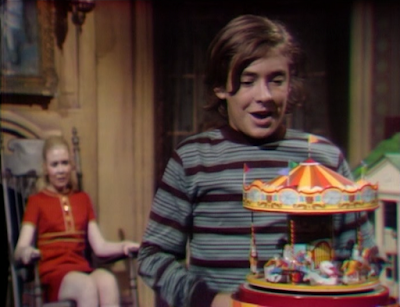 Carolyn wanders the west wing looking for David and Hallie. She hears music from behind a door, but when she opens it, she finds herself in a closet. She then goes into the room across the hall. 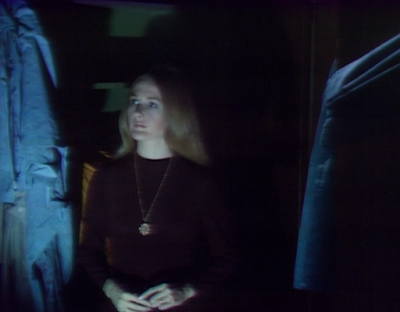 David tells Hallie they won't be alone in Rose Cottage. He tells her to come and listen to the music. He says they want her to. She reluctantly approaches him. 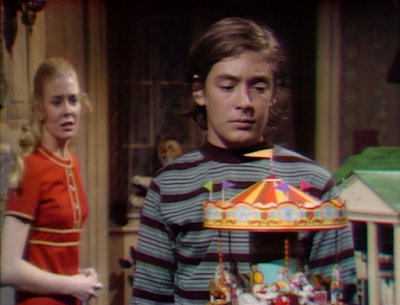 Carolyn continues to search for the sound of the music. David comes out of the playroom and Carolyn turns and sees him. He says he's looking for Hallie. She says Hallie must be where the music is playing. David tells her that they must be hearing it from the east wing. Carolyn reminds him he's not supposed to be in the west wing. 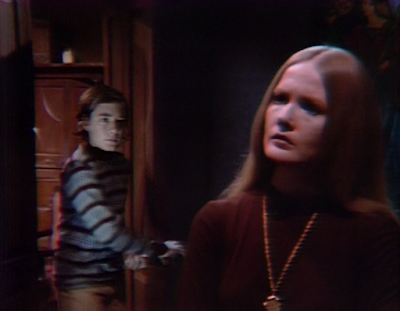 Hallie listens to the music and says, "yes, she knows."

David asks if Maggie is feeling better, and Carolyn says she's going to check on her. Hallie comes into the drawing room, and Carolyn tells the two of them to get ready for bed. She goes upstairs. Hallie tells David he was right about the music, and she knows what they must do tomorrow. 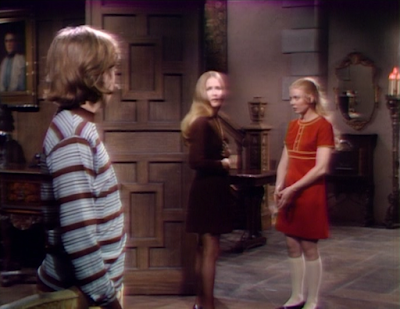 Hallie tells David that he'll have to do it, because her wrist still hurts. She tells him to lock the door after she leaves so no one will catch him. He does, and then he sits down at the table and begins to assemble ghostly looking dolls. There's a knock on the door, and once he confirms it's Hallie, he lets her in. She has some green material that she marks with chalk. She tells him to cut along the lines, and hands it to him. He follows her instructions. 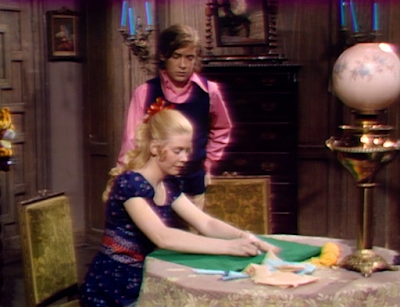 Maggie asks Carolyn to draw the drapes because the bright light hurts her eyes. Carolyn tells her they should have called the police. She mentions that there were attacks like this a year ago. 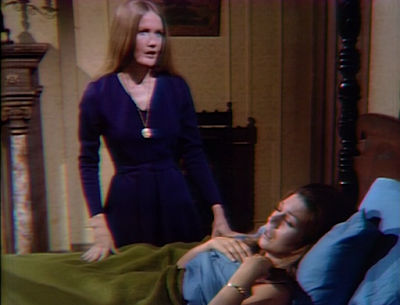 David asks Hallie why they need to make the doll. She says the doll is going to be someone who will live with them in Rose Cottage. There's a knock at the front door, and David goes to answer it. It's Sebastian Shaw. He asks if Maggie is there. David says she's sick, and Hallie goes upstairs to see if Maggie will see him. Shaw tells David that he can't do his horoscope right now. David tells him there's no point in knowing the future—it's just going to happen anyways. He leaves, and Carolyn comes downstairs. She explains to Shaw that it wouldn't be good for Maggie to see him. She explains Maggie was bitten by an animal in the woods. He asks for more detail, and Carolyn takes him into the drawing room. 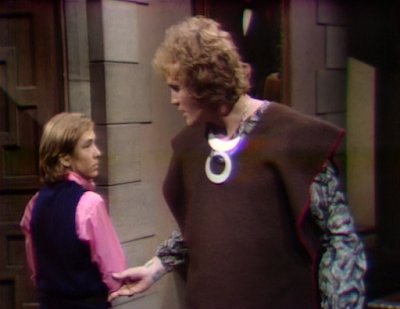 Hallie tells David he has to draw a face on the doll. 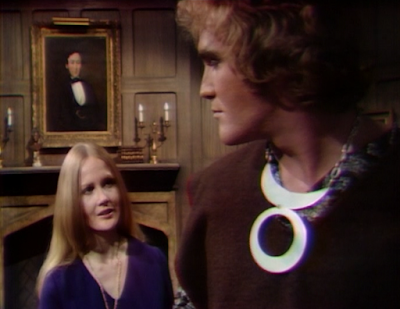 David finishes a doll, and asks Hallie who it is. She says, "Leticia." David asks who she is, and she says she doesn't know, but they will no soon. They leave to go to the playroom. 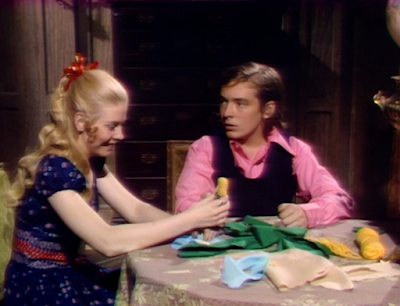 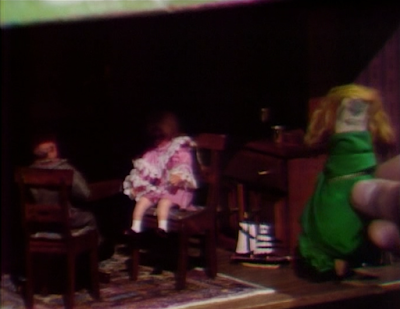 Carolyn tells Maggie that Sebastian was disappointed that she wouldn't see him. The dogs howl, and Maggie says she has to get up. Carolyn helps her to a chair, and freshens Maggie's bed.

The carousel spins in the dark playroom, the only lights coming from Rose Cottage.

Carolyn hums the tune she heard in the west wing. Maggie asks her about it, saying it was lovely.

David says that maybe they shouldn't have done it. Hallie reminds him that he was happy about being in Rose Cottage this morning. 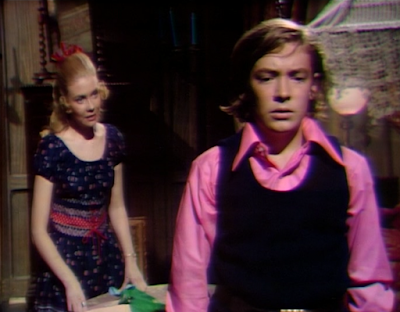 Maggie opens the window to her room, and Carolyn tries to get her to lay down. She asks about the tune again, and Carolyn hums it again. 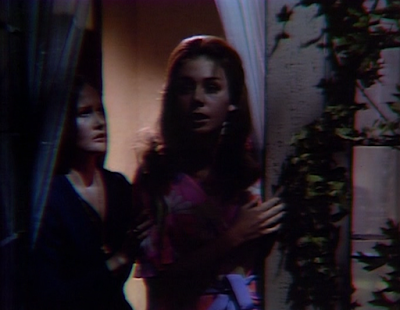 Carolyn enters the playroom, wondering why she's there, and how it can be, considering the room doesn't exist. She walks to the carousel music box. She looks around the room, wondering who called her there. 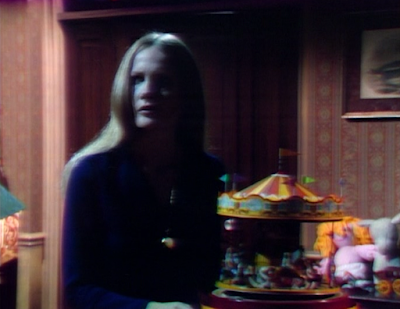 John: Carrie, the friendly ghost, the friendliest ghost you know! Okay 1970 ghosts, Carrie has broken the sound barrier, so the next time we see Gerard or Daphne, I expect them to start yapping!

Christine: If the ghosts of Daphne and Gerard start jabber-jawing, do you think they are going to be as frightening? It's just not going to happen.

John: Shaw's response to the news of Maggie's attack furthers my belief that we'll soon find out his gal-pal Roxanne was responsible. But I was surprised by his question about whether she was bitten anywhere else besides the neck... that's a question Willie wouldn't even ask about his undead employer!

Christine: I thought his question was an attempt to rule out an actual animal attack in order to confirm that his vampire mistress is responsible.

John: It sure was nice of the kids to make a doll so they won't be lonely when trapped in Rose Cottage for all eternity. Of course we know that 1995 Carolyn isn't stuck in Rose Cottage, so if she's also Leticia, does that explain her being crazy in the future? Before anyone gets too excited thinking this will all make sense someday, keep in mind how story continuity has been maintained for the past 1100 episodes...

Christine: After seeing the doll they made, it is obvious that Maggie really needs to be spending more time teaching the children arts and crafts. Do you think we can check off another item on the Catastro-tracker or not? Carolyn hummed a tune rather than singing a song. I guess we'll see what happens tomorrow to decide whether or not the la-la-la counts towards impending doom for Collinwood.