David points out to Barnabas that they're all right. Carolyn comes in, and tells Barnabas that she assured him the children were well. Barnabas says he's going to talk to Julia about taking them out of Collinwood. After he leaves, he hears Leticia say goodnight to Tad and Carrie, and them say goodnight to her. Barnabas comes back into the room and accuses the children of being possessed. David says he doesn't know what he's talking about. He claims they were just playing a game. Barnabas asks to play as well, and asks David to name his mother, and when he was born. He does the math to come up with David's birthdate, and Barnabas asks him the name of his governess before Maggie. He then asks Hallie what brought her to Collinwood, and her parent's names. She cannot. She begs him to stop. Barnabas says that David and Hallie did not leave under their own volition. Hallie calls for Daphne, and Tad calls her Carrie. 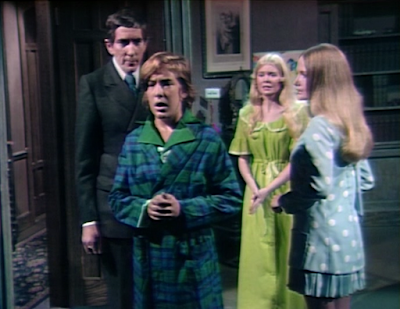 Barnabas asks what Daphne and Gerard want. Leticia tells him they do not know. Julia comes in, and Leticia says the children can't help him, and she then goes to her room. Julia is shocked to hear the possession has taken place. Tad says that he and Carrie are here to stay, and there's nothing he can do to change that. Barnabas suggests that they stay in the house, and Tad says he has no intention of leaving. 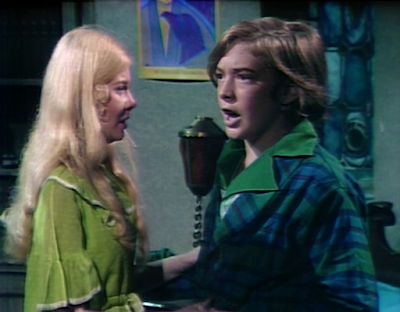 Barnabas and Julia leave the room, and she asks if Gerard has already won. He says his plan is not complete, and suggests that they go see Stokes.

Carrie asks Tad what's going to happen to them. He says they can't do anything to them. She asks him why they're there, and he says they'll know soon. He tells her he's going to the playroom, alone. She asks him if David and Hallie are dead, and he says he doesn't know, but he doesn't think so. He says that while they're there, David and Hallie just don't exist. Carrie says she hopes nothing bad has happened to them, and Tad agrees that he likes them, too. 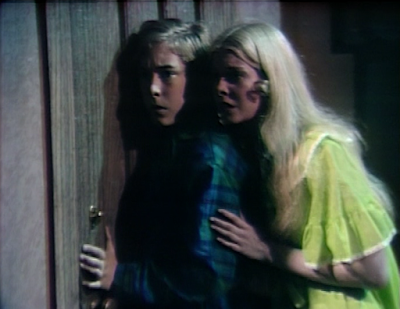 Quentin is drinking when Carolyn comes to see him. She forgets why she came to see him. He asks if they found out why the children ran away, and she says they didn't want to be taken to Professor Stokes. She says they all need sleep, and says that she sees terrible pain in his eyes. Some terrible guilt. She asks him what he's done, and he says he hasn't done a thing. 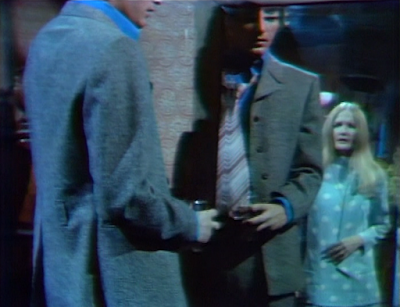 Barnabas tells Julia that he's troubled Gerard has been able to succeed so easily. She says there are still two clues to go — the murder and the destruction of Rose Cottage. Julia says that someone in the house is helping Gerard. She says that she's convinced Daphne already has control of Quentin. She shows him Daphne's handkerchief. He finds it hard to believe, and yet she's convinced Quentin is the reason they've failed at every step. 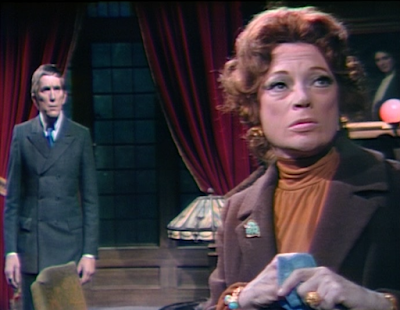 Tad tells Carrie he found out what they're to do. He says he's got Gerard's ship model, and she needs to go to Daphne's room to get something. He says that one of them will appear to them tonight, but not as a spirit. He says that Daphne and Gerard will soon be alive. 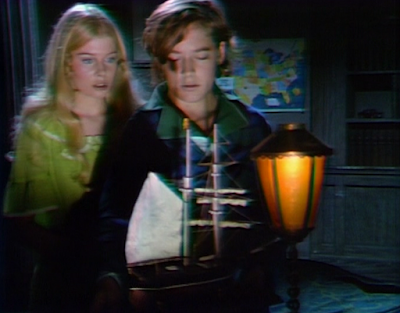 Julia and Barnabas go to see Quentin. She tells Quentin that they can destroy Gerard's grip on the house if he can get rid of Daphne. He denies knowing Daphne. Barnabas says that the lives of the children are dependent on it. Barnabas tells him that the children have already been possessed. He says that she told him no harm would come to them, giving away that he's spoken to Daphne. He admits having seen her. He says he wants her to be with him. Julia tells him that they've all been under the influence of an external force before. Barnabas pleads with him, for the sake of David and Hallie. Quentin asks Julia if she has Daphne's handkerchief. He asks them to leave him alone, and he promises to do what he can to ensure Daphne never returns. 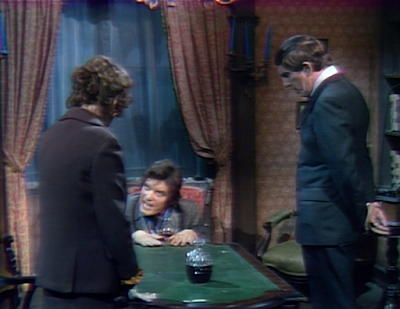 Hallie has a shawl from Daphne's room. She places it, and he places Gerard's ship, into a pentagram on the floor. He tells her to join him in the pentagram, and she does. He starts an incantation.

In Daphne's room, Quentin prepares to destroy her handkerchief. he holds it over a lit candle, but a wind blows it out. He goes to get a match, and when he returns, the handkerchief is gone.

Tad continues to summon Gerard and Daphne. Something appears in the room, and disappears. Carrie asks if they'll come back now, and he says they'll see very soon. 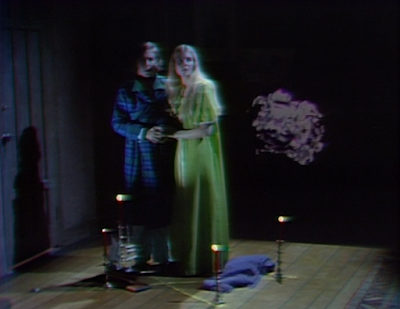 Quentin lights the candle again. He thinks there must be another way to send Daphne away.

Tad and Carrie come downstairs and go into the drawing room. Hallie hopes that they will find Daphne waiting for them, rather than Gerard. Tad hears something that Carrie cannot. There's a knock on the front door. Tad goes to answer it. 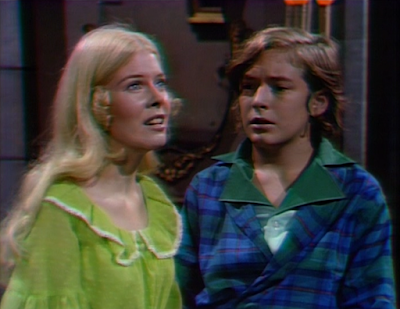 John: Barnabas did a great job in his interrogation of Tad and Carrie. Can you imagine what would have happened had parallel-time Angelique been half as clever when dealing with her false-Hoffman?

Christine: I love how Julia blames Quentin for their failure, when she and Barnabas bear quite a bit of  responsibility for their lack of success. They knew that Quentin would be possessed by Daphne and the children would end up dead, but they still ignored the signs of possession and let the kids run amuck unsupervised while ghosts beckoned to them. These two were a colossal failure on this mission. There's little hope they will be able to save the day at the eleventh hour.

John: Boy, Barnabas was on a tear today, not only did he uncover the possession of the children, he also got Quentin to break after weeks of denials he knew anything about Daphne!

Christine: It's about time!

John: Not really sure what kind of conjuring Tad and Carrie were up to today when trying to get Gerard or Daphne to appear to them. And considering how long Gerard and Daphne have been hanging around Collinwood, it's surprising that they'd need to go to such extreme measures.

Christine: They're not trying to get their ghosts to appear, they are trying to bring them back to life. It's certainly been a while since someone has marked up the floor at Collinwood with a pentagram. It suggests that witches will be making a comeback soon. You may finally get your wish to hear Gerard speak, if we find out tomorrow that he's the one banging on the door. 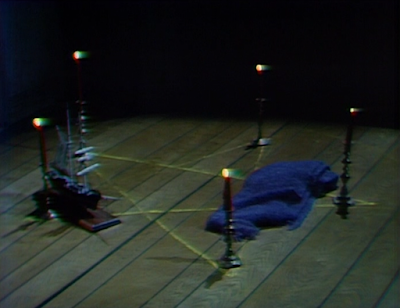