In the old house, Sebastian comes out of the shadows, grabs the mallet, and opens the secret panel. Inside the secret room, he uses the mallet to break the chains, and opens Roxanne's coffin. He points a gun at Roxanne's chest. He suddenly notices someone in the room with him—the ghost of Gerard. He shoots at him several times, but the bullets have no effect. 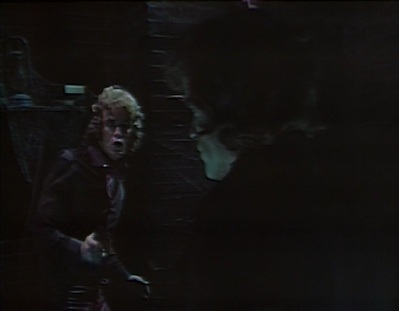 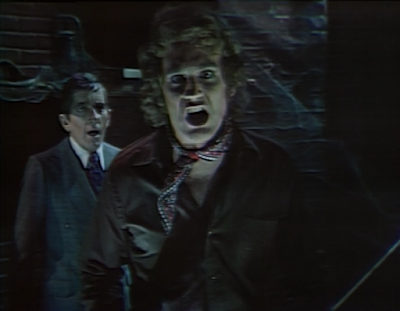 Daphne tells Barnabas that she remembers a Roxanne Drew in Collinsport. She says she was pretty, and she lived with her father. There was some mystery about her; she changed after... and then she senses Gerard's presence. She begs Barnabas not to ask her any more. Barnabas and Quentin tell Daphne that she's going to leave Collinwood tonight. She says she cannot go while the children are lost. Quentin tells her they're leaving, and Barnabas says that once he finds the children, he'll send them to her. 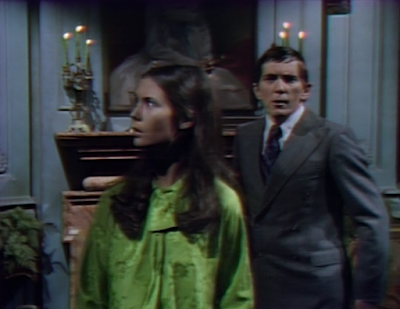 Quentin tells Daphne that Gerard can't take her from him now. He tells her they're both going into a whole new world, and pours them each a drink. They toast to their life together. After taking a sip, Daphne collapses, and then Quentin falls to his knees. He sees Gerard enter the room, and asks him what he's doing to them. 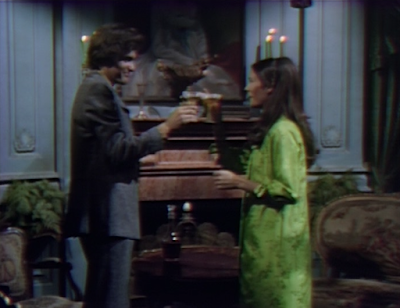 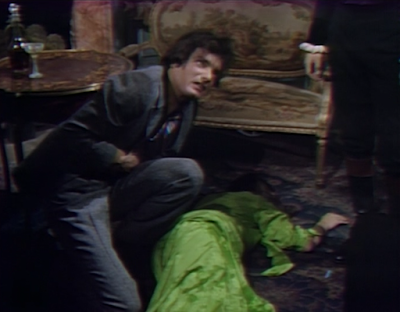 Carolyn comes downstairs dressed all in black. Barnabas asks her if she's seen Quentin. And then he asks her whey she's dressed in black. She tells him that there will be a funeral tonight. Barnabas asks her whose funeral, and the asks if it's Qunetin's. He asks her to user her second sight to tell him where Quentin is. She says she sees the forest. She adds that he's dying, but doesn't know it. She says no one can help him, because Quentin doesn't want to live. 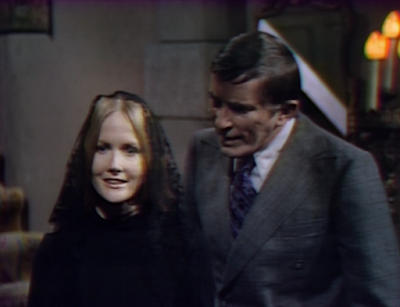 In the forest, Quentin asks Gerard why he ever thought they were enemies.

Barnabas says that nothing would make Quentin want to die, not even Gerard. He tells her that everyone's lives are at stake. She says that she cannot stop anything. Barnabas says that he will find Quentin, and leaves the house to search for him.

Julia sits with Daphne. Daphne calls to Quentin, and Julia asks her where Gerard took Quentin. She says that Quentin is not in this time now—he lives in Gerard's. 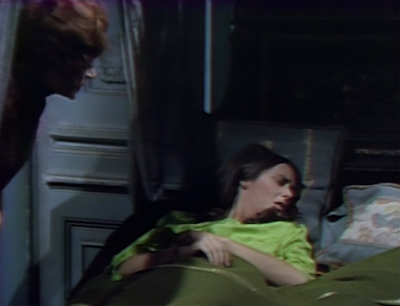 Gerard takes Quentin to an unmarked grave. Quentin says he knows why it's unmarked, but can't remember. He then reviews names on surrounding graves, recognizing them as pirates Gerard knew. Quentin sees the dates from 1840, and wonders how he knows these things. Gerard puts his hand on Quentin's shoulder. He tells Gerard that when he looks at him, it all doesn't seem so strange. Gerard gives him a shovel, and Quentin begins to dig up the unmarked grave. 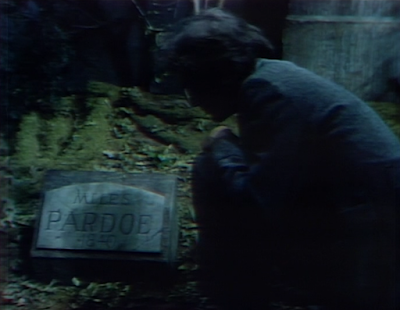 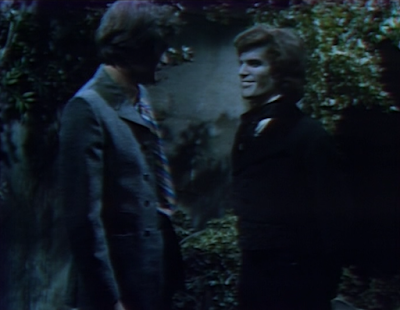 Quentin finishes digging the grave, exposing a coffin. He tells Gerard that it's Quentin Collins' coffin, and Gerard smiles.

Carolyn comes in to see Daphne with a large box, and tells Barnabas and Julia that she wants to see her alone. They leave the two of them.

Daphne asks her if Gerard sent the dress, and if she must put it on now. She asks Carolyn if the children will die, too, and refuses to put on the dress. Barnabas demands that Carolyn open the door. She does. He asks Carolyn what she told Daphne. Carolyn says she pities them for thinking they can change anything. She tells him that Gerard will wave his green flag, and walks out. Barnabas asks Daphne what Carolyn brought her. 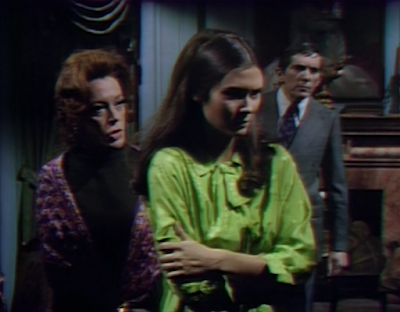 Quentin says he doesn't want to look in the coffin because he'll remember. He says it's empty because Quentin was supposed to be buried in 1840. He can't remember why he wasn't. He asks Gerard if it's time now, and he nods.

Daphne tells Julia that he knows, and there's nothing she can do. Julia calls for Barnabas.

Quentin says he won't go if Daphne won't be there. Gerard gives him a stern look, and Quentin realizes he can't run away from him. He turns and sees Carolyn. He calls her Leticia. She asks if he remembers the night they sang together, and he says that he does. She kisses him, and leaves. Quentin lists off the names of women he remembers. Gerard points at the coffin. 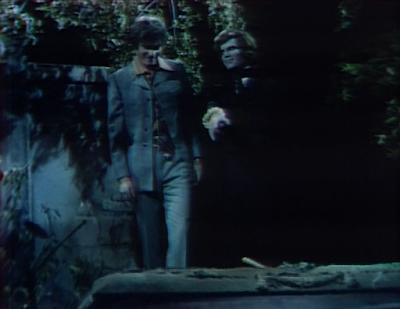 In her room, Daphne cries.

Gerard finishes filling the grave. Six feet under, Quentin has been buried alive. 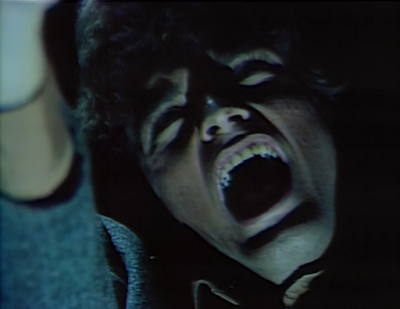 John: Everything truly seems to be shaping up for our 1840 flashback. Now that it's been established that Roxanne has been a vampire since back then... it's only a matter of time before we're transported back. How do you think it will be? I Ching? Time-Traveling Staircase? Phone Booth outside the Circle K?

Christine: Quentin may be going by way of time traveling coffin, but I expect the dynamic duo to find their way back by Quentin's Patented Time-Traveling Staircase. It was interesting that Sebastian said he was not under Roxanne's control since she started working on Maggie, yet he was still having to wear a stylish scarf. It could be because Roxanne's bites leave big, gory holes that take a long time to heal. 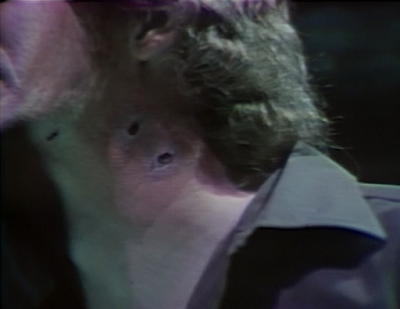 John: So nice to see more than one expression from Gerard in an episode, let alone seeing him somewhat active. Even without speaking to Quentin, it's the closest thing he's had to an actual conversation! And he even did some manual labor today, filling in Quentin's grave!

Christine: Gerard was all smiles and seemed extremely pleased to finally have things going his way. So, are we to believe that Quentin actually lived in 1840 and somehow became immortal during that time period? 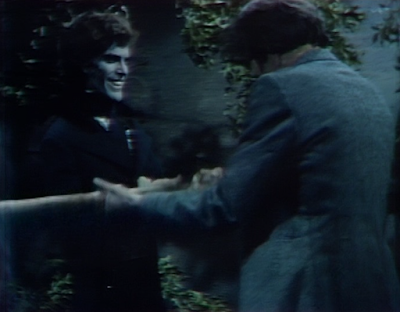 John: If ever a trademark Collinwood quick-disinterment was going to come in handy, it's with Quentin buried alive!

Christine: I wonder if this will be what causes Quentin's mind to snap and sends him to live out his days at Windcliff until he finally escapes in 1995.