Maggie leaves her room, hearing dogs howl outside. Julia realizes that she's being summoned, and decides that she'll let Maggie lead her to the one who bit her. She grabs her crucifix and follows her.


Maggie walks through the woods, with Julia not far behind. But she's apparently far enough behind to lose sight of Maggie, who she ends up calling to. 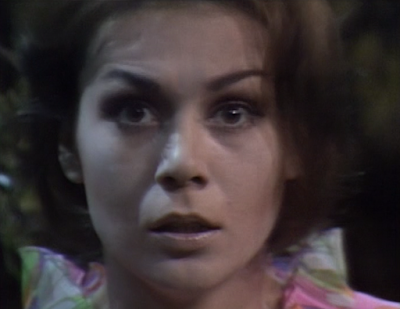 Hallie is sitting on the stairs reading Elizabeth's horoscope when David comes out of the kitchen and sees her. He asks if it says something about them, and she reads what it says, "loved ones will finally reach their home." She says it referred to them that way when it said "loved ones will meet a stranger" the day they met Gerard. David says they'll find out in a minute, because Carrie is going to tell them. Hallie says she's not sure that she wants to know. David starts to leave, and Hallie says that if Gerard wants them to know, he'll be mad if she doesn't go. She says she doesn't want to find out what's going to happen. 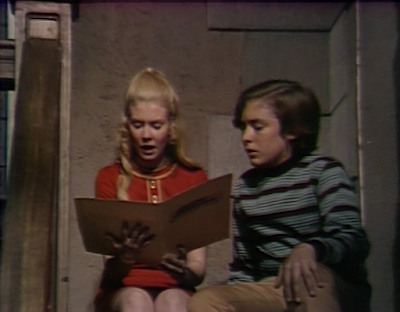 Julia wanders through the woods. Barnabas finds her, and asks why she's not with Maggie. She says Maggie was summoned, but she just disappeared while she was following her. He sends her back to the house. She says she'll be alright with her cross. 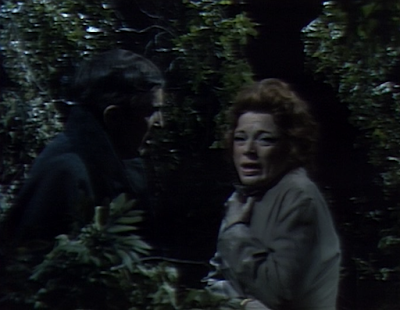 David tells Hallie that it may not be as bad as she thinks. She suggests that he's frightened, too. They hear a voice calling David. He thinks it's Carrie. He tells Hallie they have to go. They start upstairs as Julia returns. She asks where they're going, and why they're not asleep. David says they couldn't sleep with the dogs howling. Julia sends them upstairs to bed, and goes into the drawing room. 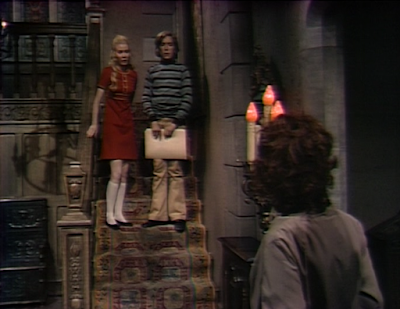 Barnabas returns to Collinwood with Maggie. Julia helps him take her upstairs.

In the playroom, David calls to Carrie. Hallie says that Gerard has stopped her. She says she's scared that Carrie looks so much like her. The carousel music box starts to play, as David asks who's in the room with them. 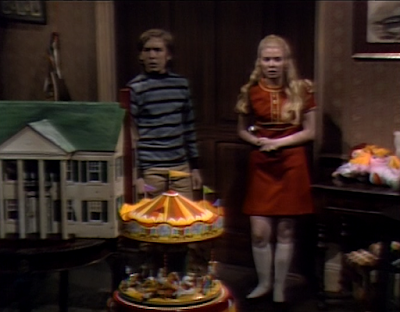 Julia says Maggie will need a transfusion. He says they can't answer questions the hospital will ask. Julia tells him that she'll go get everything she needs. Maggie opens her eyes, and Barnabas tells her that she'll be alright. He asks her what happened. He promises that it will be their secret, and that he will stop it. He tells her to look into his eyes. She moans and turns away. 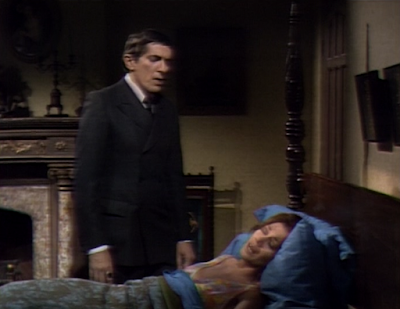 In the playroom, the lights go on in Rose Cottage. David looks inside and sees the dolls in their seats. He tells Hallie that Carrie will explain everything. 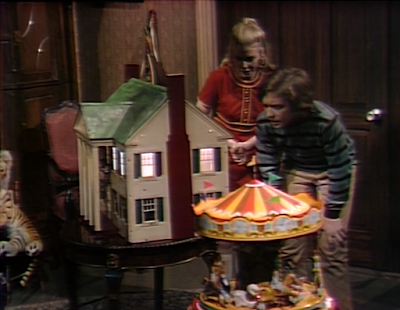 Julia takes Maggie's pulse as she receives a blood transfusion. Barnabas says she mustn't leave the room. Julia's surprised Barnabas couldn't get her to tell him who did it. He says it's a battle between he and whoever has control over Maggie. Julia wonders what they should tell the family, noting that the bite marks would be noticed, and linked to other cases. She wonders why this is happening now, and whether this links up to what they found in 1995. She asks if there could be a link between Barnabas and the person responsible, and he says there would only be a link if he created that person. 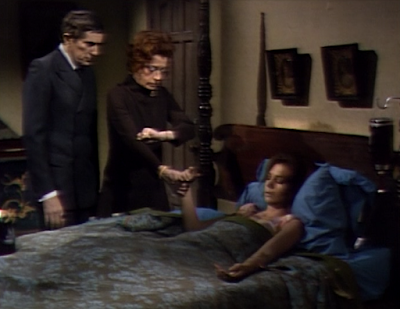 Hallie and David sit in the playroom, waiting for Carrie. She suddenly feels cold and says there's someone in the room. She walks to Rose Cottage and sees a tiny ship model in the dollhouse. She says she's sure it's the model ship from his room, now in the dollhouse. She says they can destroy the doll house. He says they can't. He reminds her they burned the dolls, but they returned to the doll house. 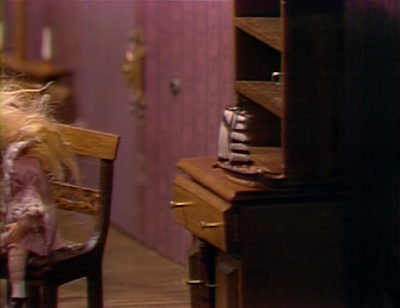 Barnabas suggests that Julia get some rest, since she'll have to stay with Maggie all day long. He wonders where in the village might there be another coffin in another secret room. In Quentin's diary, Julia finds a reference to 'G' and a cottage. She's sure it's Gerard, and Rose Cottage being referred to. She says when they find out about Rose Cottage, they'll find out about the murder, too. 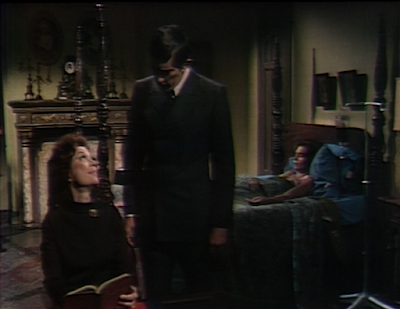 David sits on the rocking horse. He gets off and tells Hallie he wants to go. They start to leave and Hallie looks back and sees the dolls are gone. He blames the spirits for taking things. They open the playroom door, and hear Carrie's voice, telling them not to go. She tells them to look in Rose Cottage to find out what happened to them. She tells them to look through the window. They look through the window and see themselves in Rose Cottage. Carrie tells them that now they know what is to happen to them. 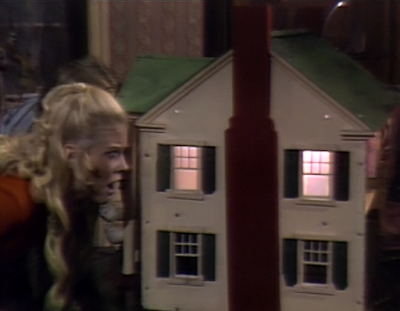 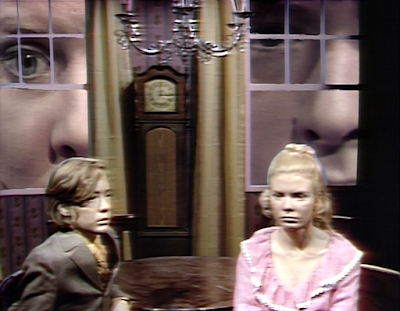 John: I can't believe someone thought it would be a good idea to show Julia's feet walking across the carpet that's supposed to be outside in the woods... I'm not even sure why they did it. It appears that she was supposed to step on a branch, but you'd think they would have just used a decent sound effect if they wanted to suggest that Maggie heard someone following her. 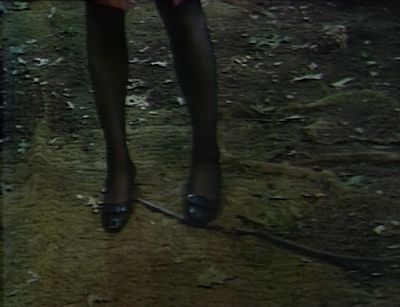 Christine: Well, they had to show how Julia lost sight of Maggie in the forest. The focus on her legs was to show that was looking down, which enabled Maggie to slip away. Back in the day, viewers did not have access to pause or hdtv, so the fact that Julia was displacing the forest carpet while attempting to make it look like she snapped a branch would have gone largely unnoticed.

John: While it would certainly be interesting to find out that Roxanne is a vampire because of Barnabas, I'm just looking forward to her eventual reveal. I really hope they don't drag it out too long. Oh, who am I kidding. The writers never heard the words "too long."

Christine: It may be more interesting to see what happens when Roxanne finds out that Barnabas is a vampire. Perhaps then she'll take him up on that dinner date.

John: I do like the idea of David and Hallie being trapped in the doll house forever. And it was a great shot of the two of them looking in through the window and seeing themselves sitting at the table. Since the same actors appear twice, it's quite possibly the most complex chroma key effect in the history of the show!

Christine: It is a novel idea, though the purpose for them being installed at Rose Cottage is not very clear. It's always nice to see Barnabas and Julia sharing an affectionate moment together. 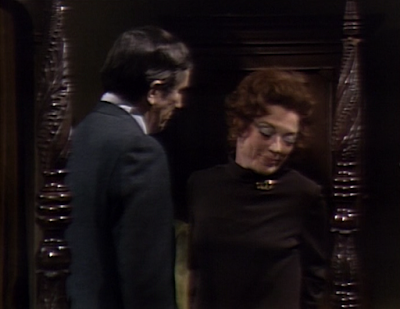 Barnabas: How well you look after me, Julia.
Julia: A habit, I suppose.