Rumson brings Julia to a portrait of his wife. Julia is shocked to see the portrait of Rumson's wife, who he tells her is named Angelique. Julia says the portrait looks very old. He says it was painted on an old canvas, in a costume she was wearing in a ball. He says he saw her photo in his fashion magazine. He went to a photo shoot she was at and it was love at first sight. The phone rings, and he says she's arrived and will be there within 20 minutes. He tells Julia to amuse herself. 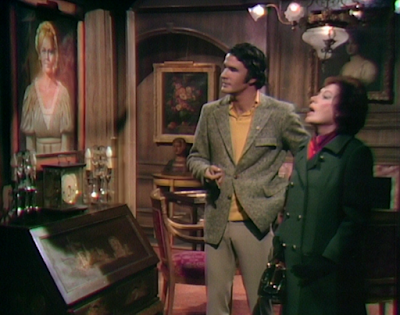 Maggie tells David that he has to do his schoolwork, and his handwriting had better improve. He asks why he can't play with Michael. Maggie reminds him that he's got a cold, and besides, they shouldn't always be underfoot at the antique store. David finishes his paperwork, and tells her she's done. Michael arrives and points out that David didn't come see him, so he came to Collinwood. Maggie says that she didn't want them playing because David is getting a cold. David assures her that they'll sit and play quietly. He promises they won't even leave the house. Maggie says Michael will have to leave if they start roughhousing. David asks Michael what he wants to play, but he just stares at Maggie. She asks him if anything is wrong. David says they can play Wall Street. Michael says he knows it doesn't matter what game they play. 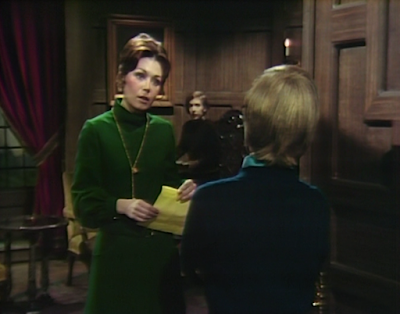 Rumson kisses Angelique, and tells her there's a woman to talk to her about the Tate painting. He asks her to get rid of her quickly. 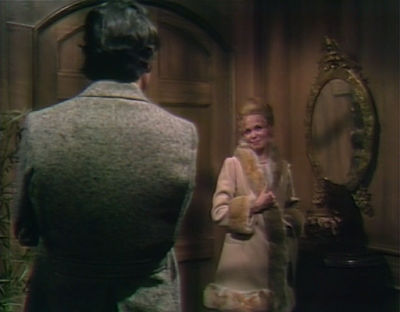 Angelique enters the gallery, and is just as shocked to see Julia. She asks why she came. She says she wants nothing to do with the Collins family. She says she's changed, and she's happy now. She says Barnabas would never believe that she is in love, or loved. Julia tells her that Barnabas might surprise her. Angelique explains that she gave up her powers in exchange for the chance at love as a human. She says she knew someone would eventually find her. Julia asks her why she has the portrait of Quentin if the past means nothing. 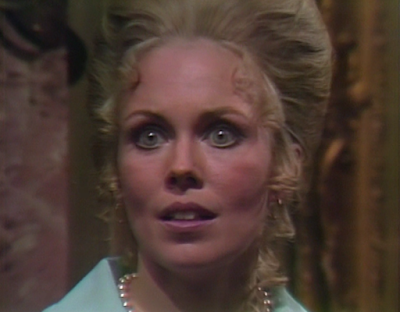 She says that when she was thinking about marrying Sky, she came across the painting in a gallery. It reminded her of Barnabas and Quentin, and all the unhappiness they had brought her. The gallery owner told Sky that she had regularly come to see it, and he bought it as a surprise wedding present. She begs Julia not to tell the others she's there. She says she won't if she gives her the picture. Julia explains that Quentin has returned, and he hasn't aged, but he has lost his memory. She tells Angelique that she must help her. 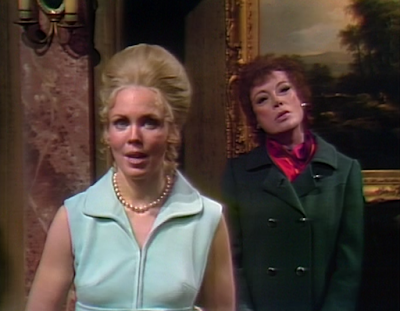 David and Michael are playing Wall Street. David tells Michael that he saw him cheat and take money from the bank. Michael says he has to win. David says that in that case, there's no point playing. David gets up, and Michael commands him to look at him. He tells him to sit down and finish the game. He does, and adds that Michael will win. 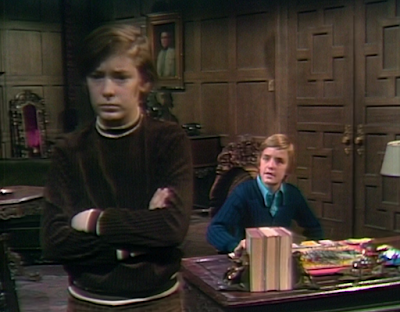 Maggie comes in and says if Michael will excuse him for a minute, she'll review his homework. Michael says he won't, and then denies to Maggie that he said that. He tells her that David's lecture can wait. Michael suggests that Maggie go back to her room. She tells him that she doesn't take orders from him. 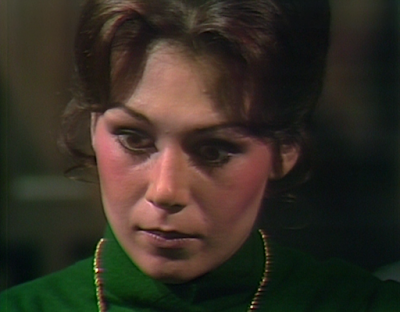 Maggie gives David five minutes, and says he has to come to her room, alone. She leaves, and Michael says he hates her, and she'll be sorry. Michael tells David that the game is finished. He sends him up to  listen to her lecture, and then he says they will have fun. David says he won't do anything to hurt Maggie. Michael says he didn't say anything about hurting her. He says they'll have a new game to play once it's dark. 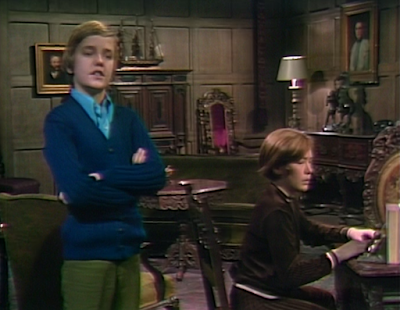 Julia says she'll send someone to pick up the painting in a few days after she's gone, and that she'll have it back to her by the following weekend. She asks Julia not to tell anyone about her. Julia promises not to, and Angelique adds that she never wants to see her again, either. Julia agrees. Julia leaves, Rumson returns, and Angelique kisses him. 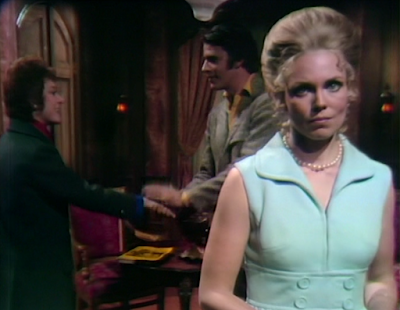 Maggie looks for David and Michael. Lightning flashes and the lights go out.

David tells Michael he shouldn't have taken the fuses out. Michael says he just wanted to see if Maggie was afraid of the dark, and then tells him to hide because she's coming.

Maggie searches for David. She goes into her bedroom and the door slams shut behind her. It's locked. She calls to David, who asks her what's wrong. She says he knows, and tells him to open the door. He does, and she says she wants him to help her find the fuse box. David says he didn't do it, and Maggie says she knows who did. She tells Michael she's going to call Megan and Philip to come get him. He says he'll call them himself. He goes downstairs and Maggie tells David that as far as she's concerned, Michael can never come back again. David tells her to please not say that. 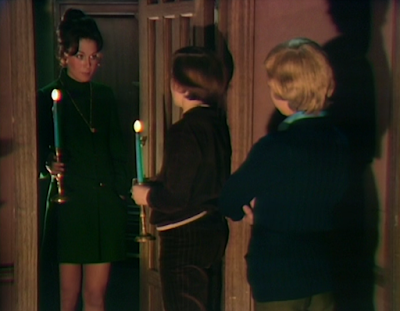 Maggie returns to he room and prepares for bed. She hears a strange breathing. She traces the sound to behind a wall, and a secret door opens in front of her. 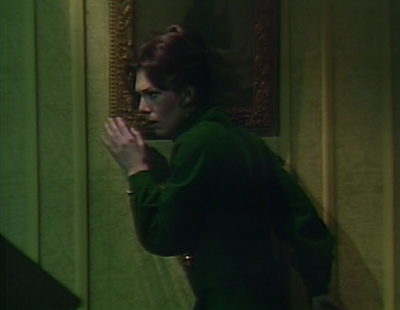 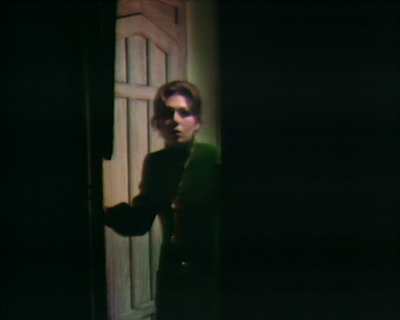 John: So in the Dark Shadows Universe, Monopoly is called Wall Street. Was anyone surprised to see the evil spawn would cheat at Monopoly? 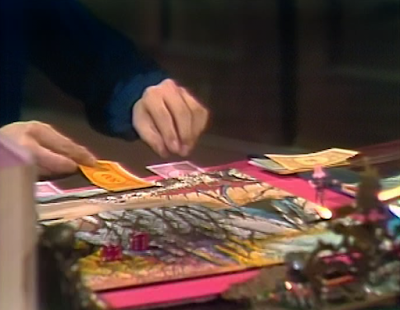 Christine: I am surprised he would cheat. I thought the Leviathans were supposed to be a superior race to humans, in which case, he should be able to win handily without cheating.  On the other hand, if the game really is Wall Street, then cheating would make sense. Incidentally, that may be Monopoly money, but that is definitely not the Monopoly game board.

John: I don't believe for a second that Angelique is a content bride living in luxury. But, even if that were true, something tells me that now she knows that Quentin is alive and well in the future, and looking just as handsome as he did 100 years ago, she's eventually going to turn up on the doorstep in Collinwood. It's only a matter of time.

Christine: You may be right. Her story about being allowed to live as a human if she could get a man to fall in love with her without using supernatural powers checks with what she told Barnabas in Episode 882, however, she told Julia she was at Tate's studio the night he covered up Quentin's portrait and began to work on "A View from South Wales," but the only one with Tate that night was Count Petofi, who returned his power to create, and was then stabbed by Aristede, where he was laid up on Tate's couch in Episode 876.

John: I guess Michael didn't get the message from Barnabas about who's boss. He sure is a nasty kid. I can't believe Maggie let him stick around as long as she did! But even stranger, why didn't they replace the fuses that Michael had removed?

Christine: The Leviathan child is a spoiled brat for sure, though it's not really clear who is Leviathan boss. Is it Barnabas?
Posted by John Scoleri at 6:00 AM