Barnabas arrives at the sheriff's office to find the sheriff on the floor. Jeb appears and accuses Barnabas of coming to betray him. He asks what Barnabas is doing there. Barnabas says he killed Paul, and now he has done this. He tells Jeb they had better get out. 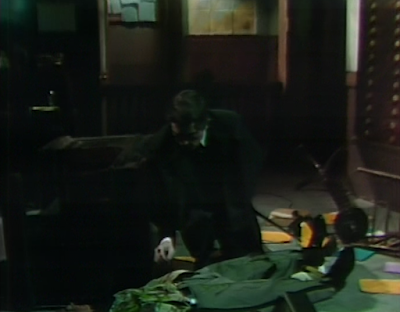 Jeb wants to know why he was there, first. Barnabas says that the sheriff found Paul's cufflink in the antique shop, and he came to explain it. Jeb says he could say that he came in and saw Barnabas kneeling over the sheriff's body. Barnabas tells him that he lives by the rules, and Jeb should, too. He says there is to be no more killing. Jeb asks if he can stop him, and leaves. Barnabas leaves as well. 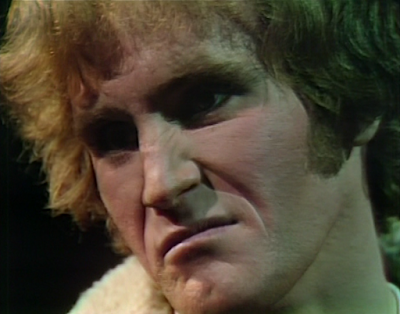 On the phone, Elizabeth tells Megan that she insists she and Philip come to Paul's funeral, regardless of the rumors it being associated with the antique shop. After she hangs up, Roger tells her it will only lead to more gossip. Elizabeth wants to know why Julia brought Paul to Stokes rather than bringing him home to Collinwood. Roger admits that he also believes there might be something more going on. He says Paul was a scoundrel and worthless man, but they should investigate it privately and hush it up publicly. 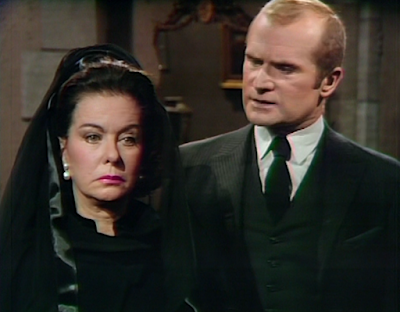 Carolyn says that should be the family motto. She says her father was murdered, and she intends to find out who killed him. She says she loved him, and Roger reminds her that she barely knew him. She asks her mother if she can remember loving him. Her mother tells her not to cry. They retire to the drawing room. 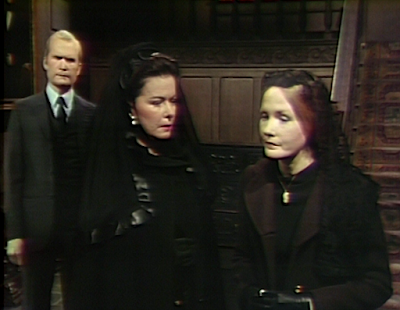 Barnabas arrives and is pleased to see that they haven't left yet. He tells Roger that he thinks he could have helped Paul, and Roger says no one could help him. Barnabas tells Roger that the killer has struck again, killing Sheriff Davenport. Roger asks how that could happen. Barnabas says the killer is an animal. Elizabeth and Carolyn emerge from the drawing room, and Roger asks Barnabas not to say anything to them about the sheriff. 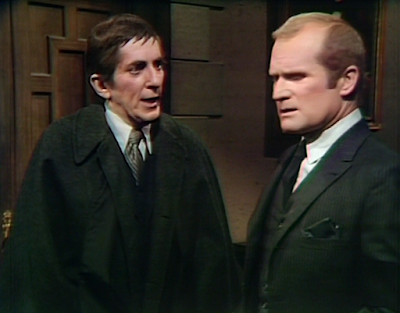 Jeb arrives at the antique shop and finds a closed sign on the door. He walks right in and calls for Megan and Philip. He's upset that they would leave without telling him. He finds a note saying they are going to Paul Stoddard's funeral. 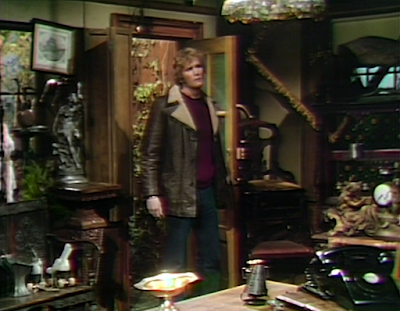 Carolyn throws a flower into her father's grave. Roger says they should leave now. She asks her mother to leave her there. She says she could have saved him. Elizabeth says no one could. Carolyn says that he's dead because people say that. 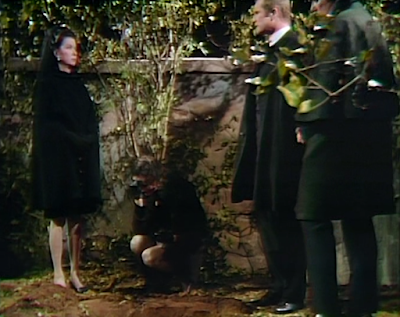 Jeb watches from behind a tombstone. 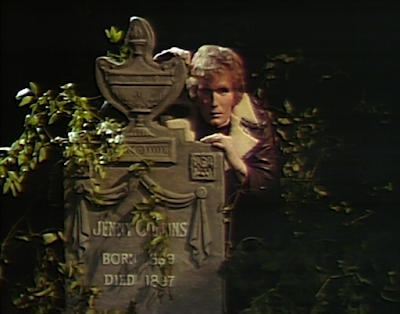 Roger says they're going back to the house now. Carolyn tells him not to expect her to forget her father.

Jeb is playing solitaire in the antique shop when Barnabas arrives. He asks him what has happened, and if the police have been there. Jeb says they were there and found nothing after Paul died. Barnabas tells Jeb that he is not to go to his room tonight, and if he does, not to change. He thinks there's a good chance the police will be back. Jeb says no one can kill him in his room, not even Barnabas. Jeb asks if he's told anyone at Collinwood about him yet. Barnabas says he hasn't said anything yet. Jeb threatens to punish Barnabas if he doesn't arrange for him to get Carolyn soon. Jeb asks if she has been in love before. Barnabas says he must forget her. He spoiled the plan, and caused her great grief. Barnabas reminds him that the book won't allow him to take Paul's place in the ceremony, and Jeb tells him to forget about the book. Barnabas says he needs to give Carolyn time. 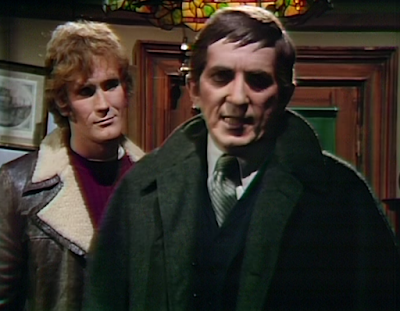 Barnabas leaves the antique shop, thinking that he will see to it that Carolyn's time never comes. 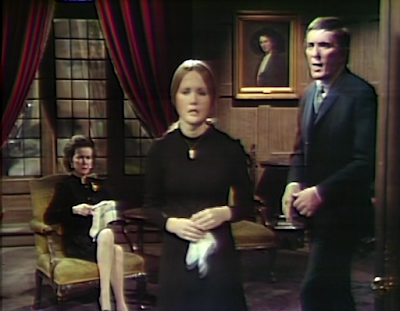 She leaves. Barnabas tells Elizabeth that Carolyn needs to go to New York. Elizabeth says that they must make her one of them. He says the book says it will not be her time for months, and he will not hasten it. 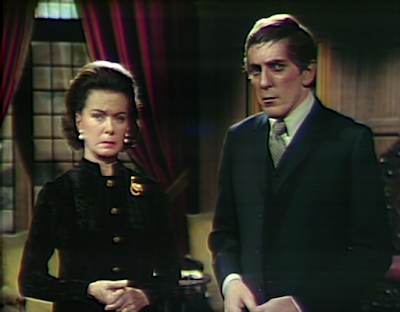 Carolyn leaves a note for Megan in the antique shop. Jeb sneaks up behind her and covers her eyes. She's frightened by him. He introduces himself, and says he knows who she is. She asks about Megan and Philip, and he says they're out. He says they told him so much about her. 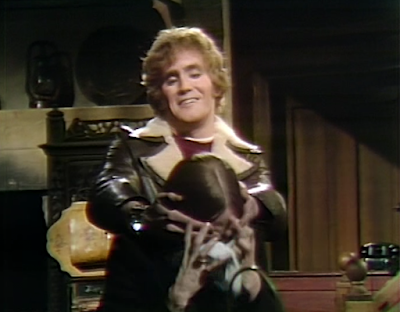 He adds that he will help her forget about her father. She says that no one can. He offers several ways to make her forget. She goes to leave but he stops her. She turns to look at him, and smiles. She says goodbye, and leaves the antique shop. 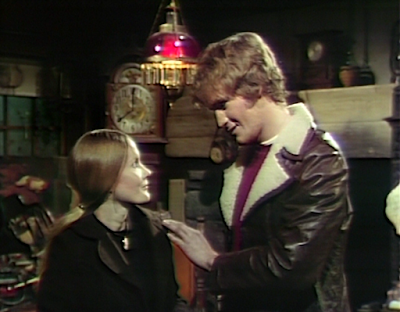 Barnabas tells Jeb that he thought the matter was settled. Jeb says that she will go up the stairs and join him in his room. Barnabas is surprised to hear that she too would have his ability to change form. He tells Jeb that he cannot have Carolyn, and Jeb tells him that he will, and that he will marry her on Friday. 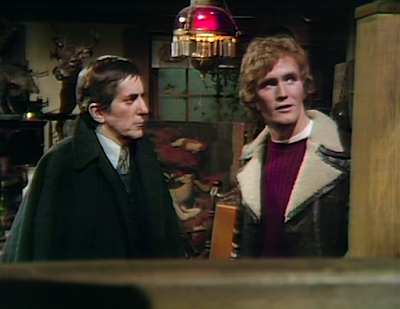 John: If Barnabas truly had the upper hand, you think he would have taken the Leviathan creature over his knee by now. But in its latest form, Jeb, it remains defiant, leading us to believe that Barnabas, the de facto leader of the Collinwood Local Leviathans, has no real influence over him.

Christine: The Leviathan chain of command has always seemed a bit fluid, though I suppose now that the Leviathan brat is all grown up, he thinks he is the leader of the Leviathan clan. I doubt he is the progeny Oberon and Haza hoped for when they handed Barnabas the Leviathan box, with his overt disdain for the rules laid out in the Leviathan text, but this is what permissive parenting will get you. 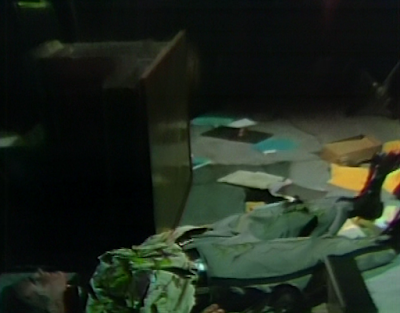 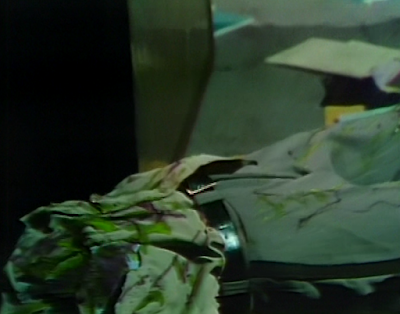 John: I get that the Todd's had the day off today, but isn't it odd to invite them to the funeral and not have them show up at the graveside service? 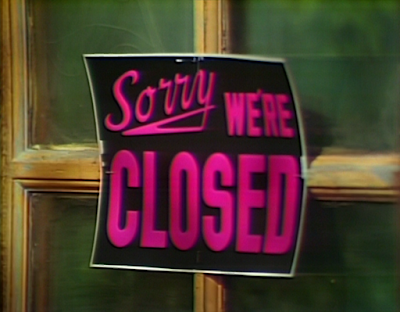 Christine: Since no minister was present, it appeared that the service was over, and it's reasonable to assume they attended the service since Carolyn wrote Megan a note thanking her for coming.

John: Ah, Jeb, the latest in a long line of sleazy suitors for Carolyn. At least we've got a scheduled wedding date to look forward to!

Christine: Jeb must have some unseen powers to be able to turn her head, because that guess-who move is pretty lame! I was surprised she didn't instantly connect it to when creepy Michael used the same move on her. I shudder at the thought of their slime fest of a honeymoon in the room at the top of the stairs. 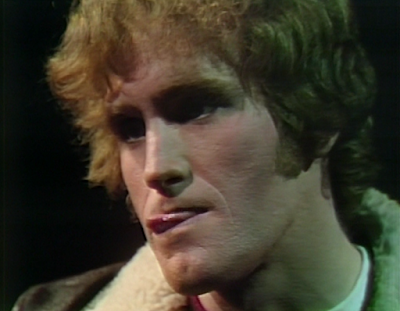 Together with their families,
Miss Carolyn Stoddard,
daughter of Elizabeth Collins Stoddard and the late Paul Stoddard,
and Jebez Hawkes,
son of Leviathan,
request the honor of your presence at their marriage
Friday, the thirtieth of January
nineteen seventy
At four o'clock in the afternoon
Collinsport Antique Shop