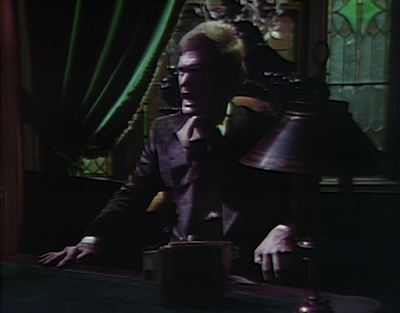 Grant and Chris enter Tate's house. Tate tells them not to come any closer. He looks at Grant and calls him a liar. He says he's a young man, not Quentin Collins. Grant says he too looks young for an old man. Tate says there's a way to stay young. He then calls Grant Quentin, and says it's due to the genius of Tate. He says Quentin took Amanda Harris from him. He then starts his stupid laughing. Quentin throws a vase of flowers at him, and the body falls down. His head rolls along the floor. Grant runs out, and Chris picks up the head of Charles Delaware Tate. He says it isn't real. He puts it next to the dummy body. He says he's not leaving until he finds Tate. 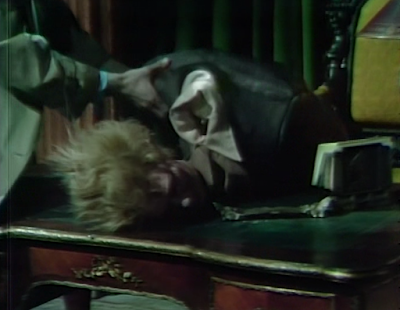 He hears a man crying. He opens a curtain and finds a wrinkled old man. He asks if he's Tate, and the man says Tate died years ago, because he killed him when he got old and ugly. He says he made a new Tate who was young and handsome. 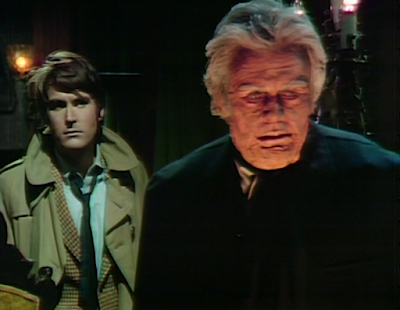 He picks up the head and says he's gone, too. He stares into the face of the dummy and tells Chris that he destroyed him. He tells Chris to go away. Chris says he wants him to paint his portrait, like he did for Quentin. He tells Tate that he's a werewolf, and says he's not leaving without a portrait. Tate says he can paint, but it won't help him. He says things were different then. 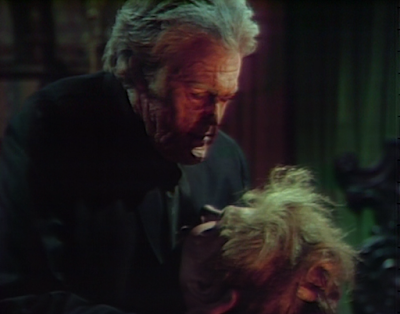 Tate tells him to leave or he'll set his dogs on him. Chris demands that he give him the key to the room they're in. Tate pulls it out of a drawer. Chris takes it and locks them in. Tate grabs the dummy head and starts to cry. Chris tells him to get out his canvas and paint. He explains that there will be a full moon tonight, and he's not leaving until Tate completes his portrait. He suggests that he complete it before the moon rises. 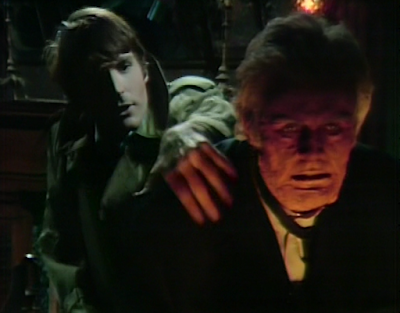 Carolyn is cleaning up at the antique shop when someone puts his hands over her eyes. She tells Alex not to do that, and then realizes it's not Alex. Michael introduces himself to her, and gives her a story about an accident that resulted in his coming to stay with his cousins. He says he'll be happy with them because she's there. She says he must say that to all the girls, and he tells her not to laugh at him. 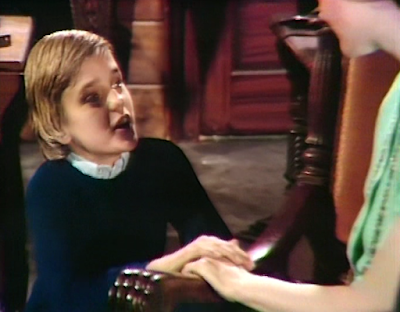 She gives him a task to do in the shop, and explains that she wouldn't ask a child to do that. He does the task and finds a locket. He tells her that he's got a present for her. He hands her the locket. She says it's Megan's. He says she gave it to him, and he's giving it to her. Philip comes downstairs and says they seem quite involved. Carolyn gives Philip the locket to return to Megan. Michael tells Philip to ask Megan and see what she says about whose locket it really is. 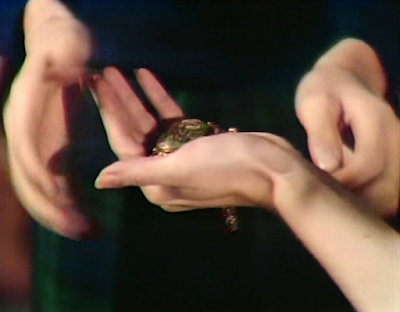 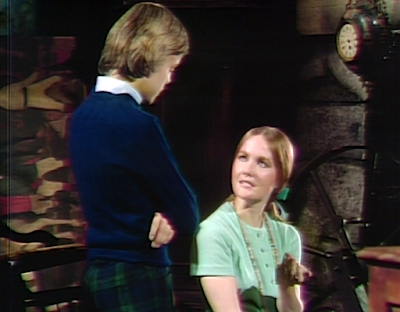 Grant wanders through the woods, wondering why he ran away from Tate's. He wonders who Amanda Harris is. And who he is. And why Tate kept laughing at him. 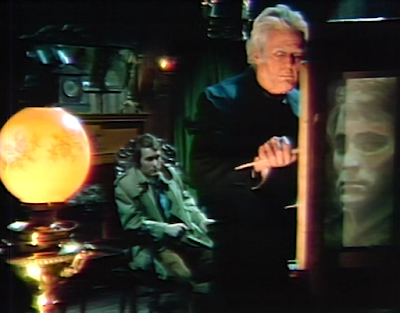 Michael leers at Carolyn in the antique store. She is clearly uncomfortable, and tells Philip that she's going for a cup of coffee. Michael offers to go with her and Philip stops him. She leaves, and Michael tells him that he's making her uncomfortable by staring at her. 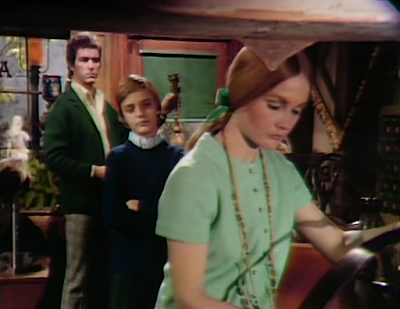 Philip tells him not to try and rush things. He says he's endangering things by moving things too fast. Michael says he has no right to talk to him like this, and Philip says it was stupid for him to give Megan's locket to Carolyn. Michael stomps upstairs, and reminds Philip that he won't always be small. 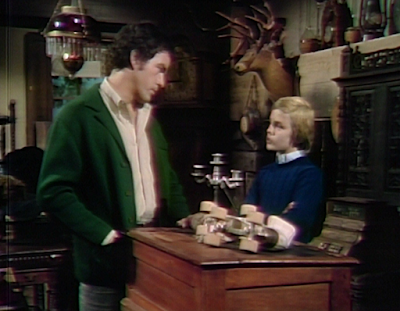 Grant is compelled to return to Tate's house.

Tate puts the finishing touches on Chris Jenning's portrait. He tells him to take it and leave. Grant drops to his knees and cries out in pain. Tate reminds him that he told him it wouldn't work. He says he did as he was asked. Tate asks for the key, but Chris doesn't respond. He turns into a werewolf. 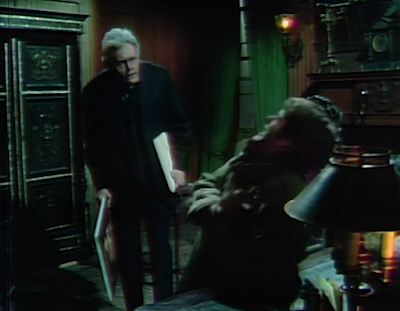 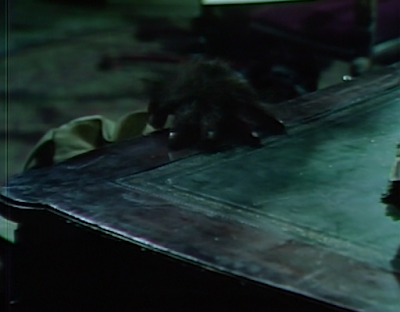 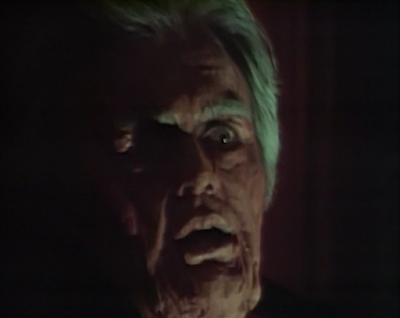 Grant arrives back at Tate's only to hear his screaming from outside the door. 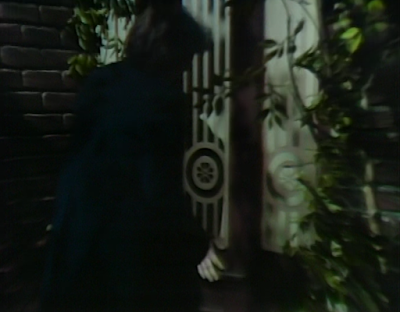 John: They didn't go with the Dick Smith school of old age make-up for Old Man Tate, and it shows. I think even Dead Jeremiah Collins looked better! 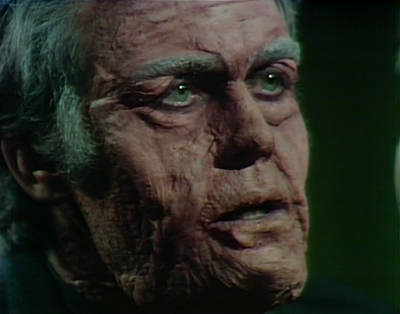 Christine: They had to show why he would make a young dummy of himself, and then cry when it got broken. He is pretty hideous. It is certainly nowhere near the realistic aged appearance Dick Smith gave Barnabas in Episode 350. It looks a lot more like what happened to Angelique after Sam messed with her portrait.


John: We've met a new breed of creepy stalker on Dark Shadows! And to think, Michael is just a kid. Will this evil man-child continue to drool over Carolyn as he gets older and older in the days and weeks ahead? 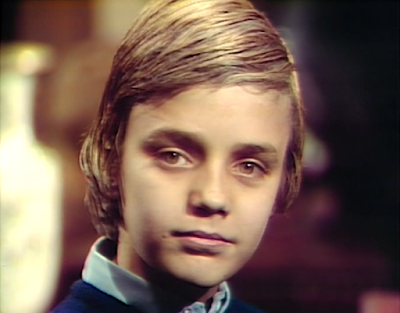 Christine: It can only get worse.

John: If you can't afford to bring in another actor to play the full werewolf, you go with the wolf's paw! So if Tate was right, he didn't paint fast enough. And if Chris was right, he didn't give Tate enough time to finish his masterwork before the moon rose. Whatever the case, I wonder if this will signal the return of Count Petofi to sprinkle some magic fairy dust on the new portrait to make it a magical werewolf mirror.

Christine: It seems to me that Tate no longer has the powers bestowed upon him by the Hand of Count Petofi, which would explain why he didn't just paint a youthful portrait of himself instead of making a lame imposter dummy, and why he told Chris that painting a portrait of him would not help, since things were different when he painted Quentin. It might also suggest that Petofi did not survive his ordeal with Blackwood in Episode 883. Was the wolf's head in the antique shop foreshadowing Chris' transformation, or signifying Michael's wolfish behavior, drooling over Carolyn? 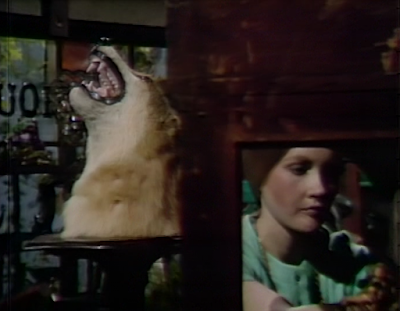