Julia, Grant and Amanda go into a room where Julia says there's a portrait of Quentin by Charles Delaware Tate. Grant asks her if it looks like him. She says she hasn't seen it. She says the professor has removed a landscape painted over it. Julia asks him to look at the portrait. He agrees. Julia uncovers it, and upon seeing it, Amanda screams. She runs out of the room, leaving Quentin to look at it. It's of a withered, 100 year-old, sore-ridden Quentin Collins. Quentin turns away from it. 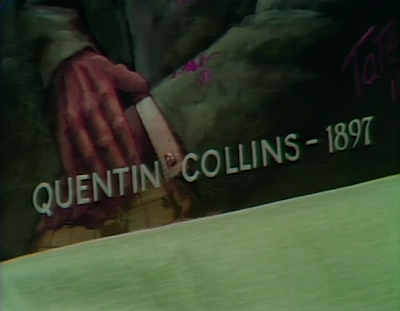 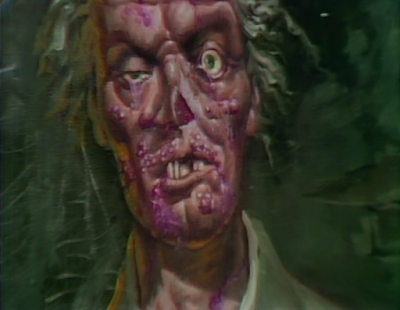 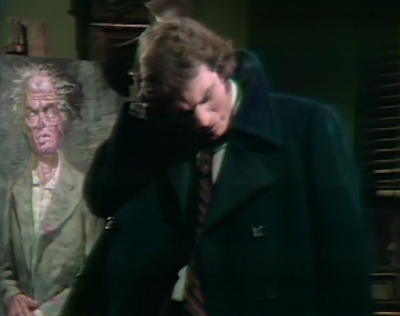 Outside, Olivia wonders if that's how Quentin would look if not for the portrait. She wonders if she too should look the same. She turns to go back to him and finds Mr. Best waiting for her. She says she still has five minutes, and Quentin may remember her. She asks him to let her go back to see if Quentin knows her. 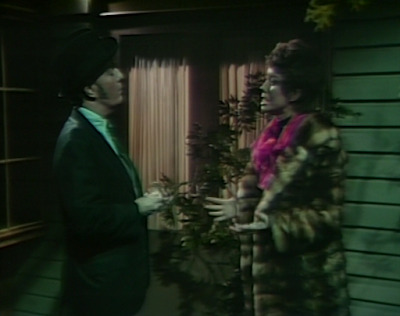 Julia tells Quentin if the painting means nothing to him, he can look at it. He agrees to examine it more closely. He says he remembers the day the portrait was painted. He says the portrait is as he truly is. He's surprised she can still look at him. He calls her Julia, and says that's what he called her when they first met. He remembers Amanda, and then that Olivia is Amanda. 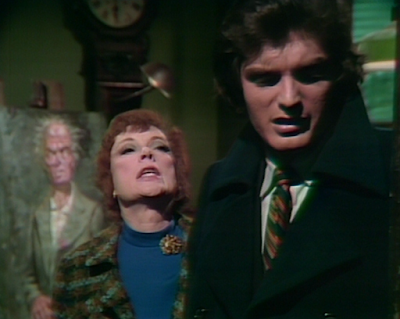 Mr. Best says she must come with him, and promises her that it shall not be unpleasant. She says she'll never see Quentin again, and he tells her she doesn't know that. She pleads for one moment with Quentin. Julia asks if he still loves Amanda, and he says he always has. Julia says he must tell her, or she will die tonight. He runs outside.

Quentin calls for Amanda, and finds her handkerchief on the ground. 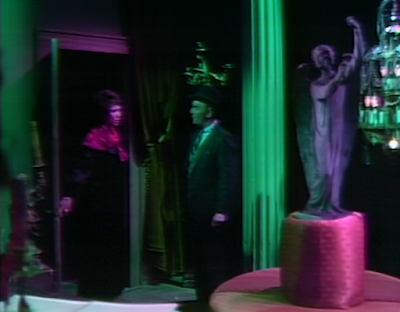 Amanda tries to get out the same door, but cannot open it. A bellboy appears with a key and says he can let her out. She takes the key, but it doesn't work in the lock. He says he's fooled a lot with that trick. He confirms she can't get out by that door. She asks if there's another way. He says there is. 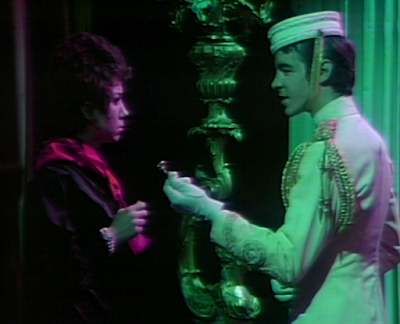 She offers him a trinket, but he says it's of no value to him. He remembers her from 70 years ago. He says she was lucky to be let go back then. He says he's there to show her to her room. She cries as he tells her that he'll give her a nice room. 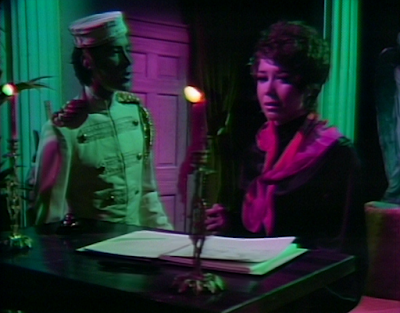 In Amanda's room, Quentin realizes that he'll never see her again. He asks Julia why she didn't tell him who she was. She asks if it would have helped, since he didn't know who he was. He tells Julia that Amanda asked him if he loved her, and realizes that if he had said yes, it might have saved her. Julia tells him that he has to start thinking about... when he interrupts her and tells her to leave him alone. Quentin takes a letter opener to his throat and says he will be with her again when Mr. Best enters and tells him to stop. He explains that while it was Amanda's time, it's not his. Quentin goes to attack him, but is unable to. Mr. Best says he is impervious to attack. He's surprised to find that Quentin loves her. Quentin asks him to make a wager with him for her life. Best tells him he knows that he's alive thanks to Count Petofi. He asks Quentin if he would stay with Amanda. Quentin says he would, and asks Best if he'll do it.

Best returns to his 'hotel' with Quentin. Quentin asks if he'll have to stay there forever, and Best says only if he can't get out. Best leads him to a door. Quentin opens it. Thunder and lightning flashes. Best tells him that the door is the way out. He says it's seldom used, but every now and then he gives someone who impresses him a chance to escape. He says it takes courage and cunning. Quentin asks what's out there—if it's a trap. Best says it's many traps, and asks him if he wants to try. Quentin says yes, with Amanda. 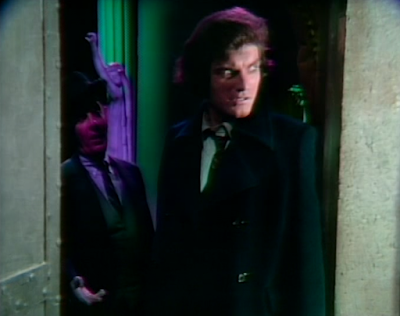 Best tells him that if they touch each other, she will be lost to him forever. If they both reach the outside world, they will be together for eternity. He adds that if he loses his way, he will be lost, too. He offers Quentin candles, and bids him good luck. Quentin picks up the candles and goes to the door. He opens it, and Olivia appears behind him. She reaches out to touch his shoulder. 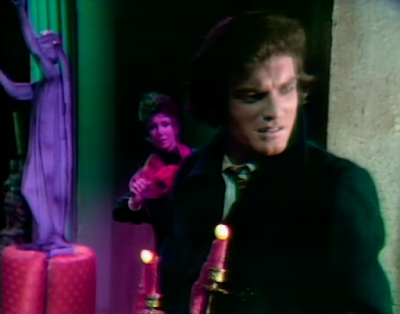 John: I was pleased to be right about the portrait, but it's probably more telling about the writers' lack of imagination then any grand insight I have. That said, even I wasn't expecting quite so derivative of the portrait from the 1945 film The Picture of Dorian Gray. 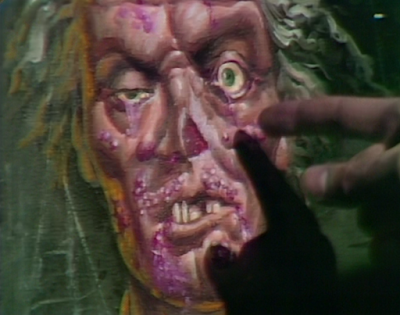 Christine: It could have been a lack of imagination on the part of the writers, but I prefer to consider it a tribute to an enduring tale and a great movie moment.


John: It seemed to me that Death's Bellhop showed up on set of the wrong show. What was with that accent? It was telling that his credit was presented on a blank background cut into the credits over the set we're used to... 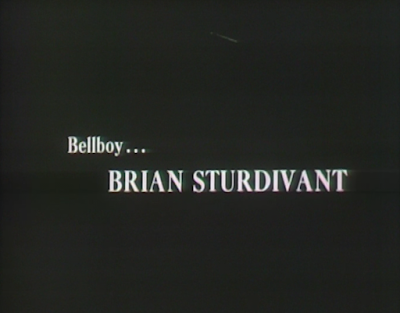 Christine: I think it was trying to be a cockney accent, and I'm still trying to work out why Death has a bellboy to begin with. The fact that he got an afterthought end title rates him higher than some other folks who have appeared without any credit at all. We will be seeing this lad again later this summer.

John: Ah, Mr. Best is a sporting man. That always makes for good drama. But couldn't they have done a bit more to setup what it was Quentin would need to do to 'escape' his hotel? This is even more frustrating than the lack of a visible Leviathan creature. Though it would be funny if tomorrow's episode starts with Amanda touching Quentin's shoulder and being whisked away into the abyss... Looking forward to seeing that one, since it's my official birthday episode of Dark Shadows!

Christine: Once again, we are expected to employ our imaginations to make up for the lack of detail provided. Hopefully you'll get something exciting in the episode that aired the day you were born. Since the leap year has still got us out of sync, we'll have to wish you a Happy Birthday today! 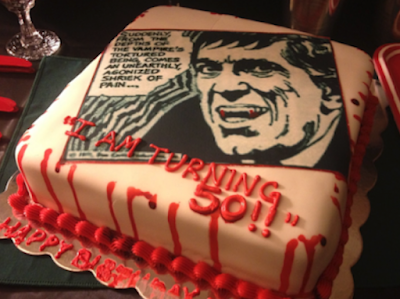 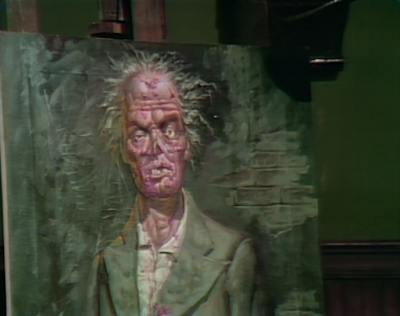 That wasn't an edit with the Bellboy's name. I'm guessing the black used on his title card wasn't dark enough to key out over the set shot, so they just took the camera shooting it full to give him credit. If that was an edit, in those days, the music would have been noticeably cut. Plus the way they went live to tape they wouldn't have bothered. I direct television for a living, by the way...haha