Maggie returns to he room and prepares for bed. She hears a strange breathing. She calls out to David and says she knows that it's him. She tells him to come out from hiding. A secret door opens in her room. She tells David to come out, and the door slams behind her. 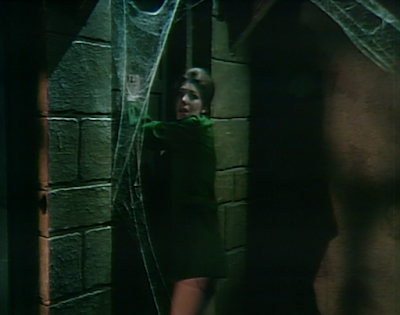 Maggie wanders through the secret corridor and asks David if he's doing this because she sent Michael home. She then calls out asking if Michael is responsible. She searches for a way out. 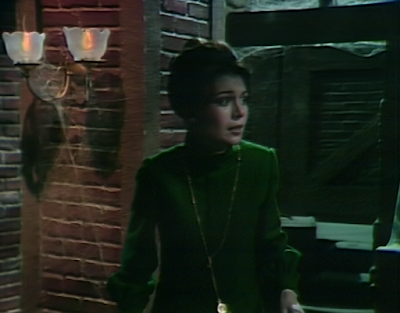 In the antique store, Megan appears to be frustrated. Philip arrives and she tells him that he was supposed to be back hours ago. She says she called to check in on him, and he wasn't where he said he was for the past two hours. She demands to know where he has been. He says he drove out to the bluff and watched the ocean for two hours. He says he was thinking about their life. He asks her why they can't choose to live their life the way they want. She suggests they close up the shop and go to bed. He agrees, and asks her if Michael is asleep. She says he's spending the night at Collinwood. 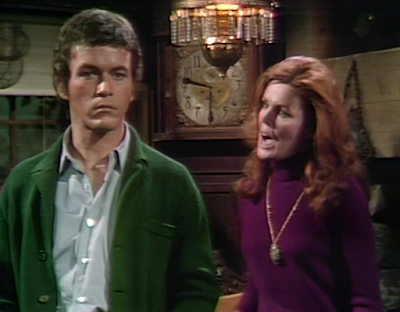 Philip is shocked, and accuses her of not knowing how to say no to him. He says she's gone too far. He says it's dangerous to let Michael stay with David. He says he's going to Collinwood to get him. He says that Michael makes his own rules, and it's not safe to leave him with other people. Megan tries to convince him that Michael is a wonderful child. Megan warns Philip to stop persecuting him. He asks her what she'll do if he doesn't. She breaks down and asks him what's wrong with them. He tells her that he doesn't know, and sometimes wishes they had never seen the box. She tells him not to say that, as Michael might be taken from them. He asks if that would be so bad, and she says it would. 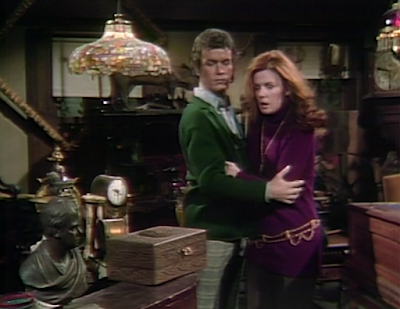 Roger returns to Collinwood and hears David playing with someone in the drawing room. He hears Michael describing that they're playing by his rules. Roger asks David who his friend is. Michael introduces himself, and David says he's Alexander's cousin. Roger says he knew that before he opened the door. Roger asks about Maggie, and David says he assumes she's still sleeping. 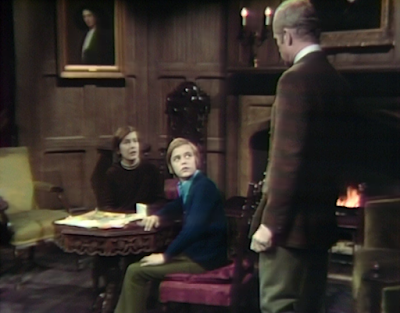 Roger leaves them, and Michael asks why David didn't tell him his father hated Alexander. David asks if they can finish the game, and Michael flips the board over, saying the game is finished. 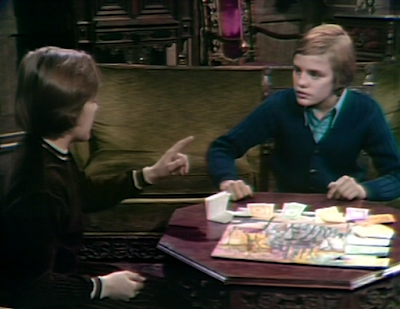 Roger goes to see Maggie and finds her room empty.

Maggie walks through another door, which slams shut behind her. She once again hears the strange breathing. 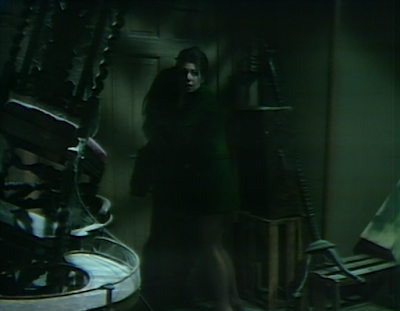 Roger comes downstairs and asks David if Maggie said she was going out. David says she must be somewhere in the house, as it's unlike her to leave the house. Roger asks him if anything happened last night. He says Maggie wasn't in her room and her bed hadn't been slept it. David says he doesn't understand, and Roger says he'll do a thorough search of the house. Roger goes upstairs, and David asks Michael if he did anything to Maggie. He tells David that he doesn't have any idea where she is. 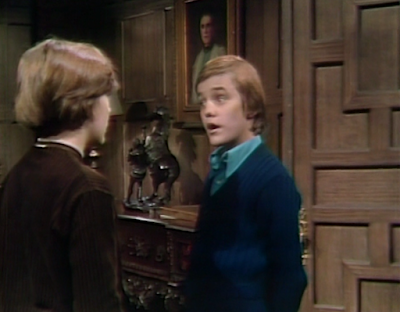 David and Michael play cards. David seems upset. Michael tells him to stop worrying about the stupid governess. Roger comes downstairs and says he's going to give Maggie a piece of his mind when he sees her. There's a knock at the door. Roger gets it. It's Philip, arriving to pickup Michael. Michael says they're playing a game. Michael says he can't wait for them to finish. Roger adds that David must attend to his lessons. Michael says that David can't do that until his governess returns. Philip asks about her, and Roger says she seems to have disappeared. 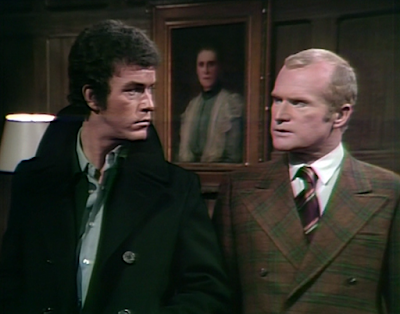 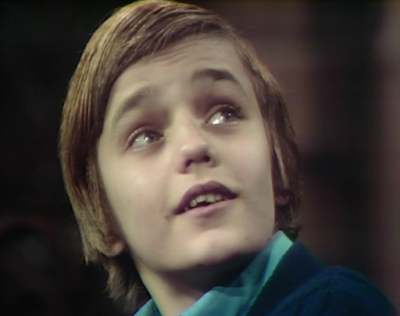 Megan is dusting when Philip drags Michael into the antique store. Michael tells Megan that Philip is blaming him for David's governess disappearing. Philip says Michael did something to her. Megan doesn't believe it. Philip tells Megan to find out from Michael where she is and what he did to her. Megan tells him to leave Michael alone. Philip prepares to spank Michael, and Megan tells him that if he does, he'll be sorry. 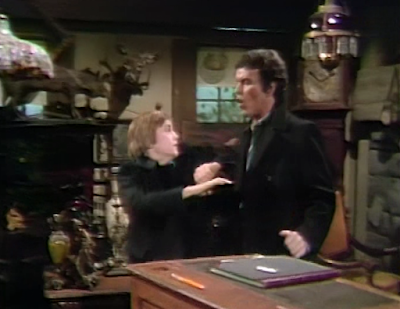 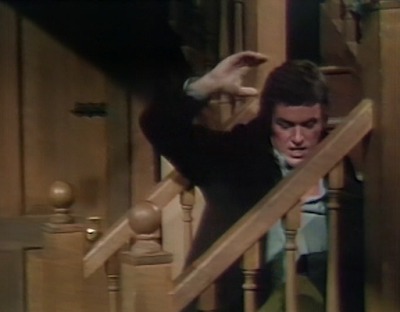 Michael runs to Megan, denying that he did anything. She assures Michael that no one will ever hurt him. Philip goes upstairs. Michael tells Megan that Philip will never understand him, and they will fail as a result. He says that Philip doesn't really believe in their cause. He touches her cheek, and asks her if there's anything more important than what they believe in. She agrees. 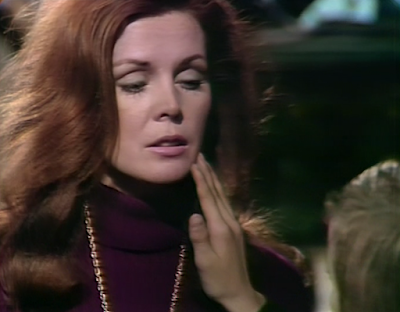 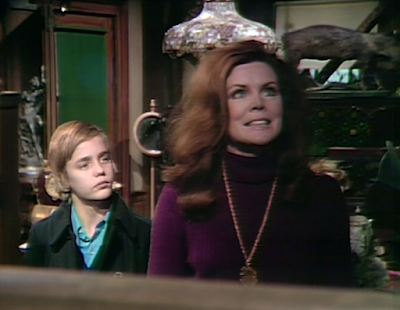 He tells her that Philip shouldn't be one of them anymore, and she agrees. He tells her that she'll do something about it, and she says that she will. Michael leaves the antique shop, and Megan takes a gun from inside a desk. 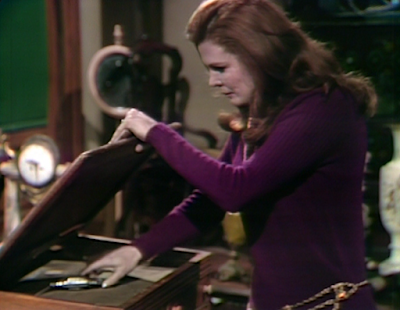 John: Honestly, how complex could the secret passages be that Maggie would be trapped in them overnight? Everyone else seemed to make a straight shot from the bedroom to the drawing room on their first attempt.

Christine: I think we're supposed to believe that it's the Leviathan breathing that's got her all befuddled and unable to find her way out. I believe it's the same passage that Josette used to sneak away with Barnabas. Where is that ghost when Maggie needs her to lead her out? Maybe she was the one who lit the lamps in the cobwebby passage.

John: I was hoping that Philip was going to admit to having an affair. But Megan seemed quick to buy his, "I just spent two hours staring at the ocean, thinking about us," excuse. Heck, even finding out he was drowning his sorrows at the Blue Whale for two hours would have been more believable!

Christine: Michael certainly needs to be disciplined, but isn't he a little old to be turned over the knee for a spanking? He seems more the age to get grounded. He should be sent to his room to do some heavy breathing by himself for awhile.

John: I really wish I had a better sense of what exactly these Leviathans were capable of. Most of the time, they appear to be in control, and at others, they seem to be at odds with their Leviathan leanings. As a result, it just comes across as completely inconsistent characters, constantly flip flopping about who's leading the Leviathan charge, and who's potentially turning against it.

Christine: I am under the impression that the Leviathans don't have absolute control over the humans, and their own personalities seem to be leaking through from time to time. I wonder if Michael's plan is to have Megan go to jail for killing Phillip, so that he can convince Leviathan Liz to provide him a place to stay at Collinwood where he can be closer to Carolyn.