Paul searches the antique shop, and heads upstairs. He hears breathing behind the door and unlatches the bolt, and unlocks the door with the key. He steps inside and is frightened by what he sees. He screams in terror. He tells it to stay away from him. 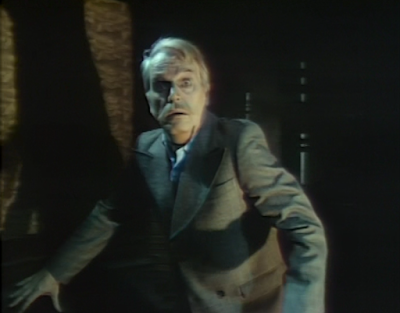 Megan and Philip return to the antique shop. She says that someone has been there. Philip says Carolyn has the only other key. She asks if he came out of the room again, and Philip goes upstairs to check. 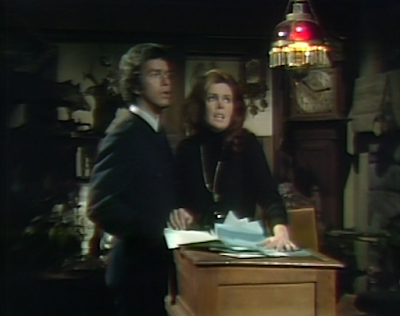 He finds Paul in the room and is shocked by what he sees. He calls Megan upstairs. She asks how he got in there and Philip says they've got to get Stoddard downstairs. Megan tries to reason with the creature, saying he can't stay. She says he's giving them a warning, and wouldn't let them take Paul out. The go outside and lock the door. She asks what Philip thinks he'll do with Paul. 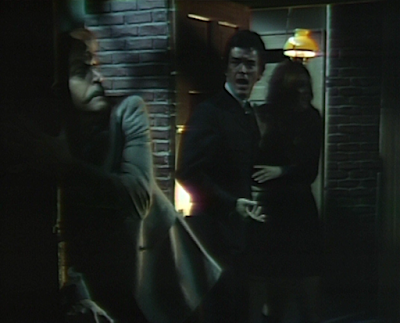 Julia tells Barnabas she knows he doesn't want her involved in Paul's case. He says he doesn't care. She asks what happened to him in the past, and when he says nothing, she refuses to believe him. She says he used to care for the people in Collinwood, and he says he still does, but tells her to stay out of this. She begs him to let her help him. He tells her that he doesn't want to involve her—he must do it alone. He asks her to watch over Carolyn. 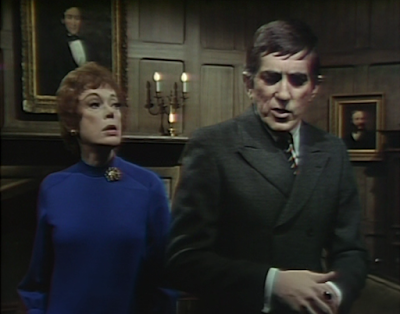 The phone rings, and it's Megan for Barnabas. She tells him she needs him at the antique shop at once. She says Paul is upstairs in the room. He tells her he'll try to get there before she closes. Julia asks him what happened at the antique shop. She presses to know about his involvement with the Todds, but he leaves. Carolyn comes downstairs and says her father is gone. She says he had planned to go into town alone and she's worried about him. She leaves and Julia follows her. 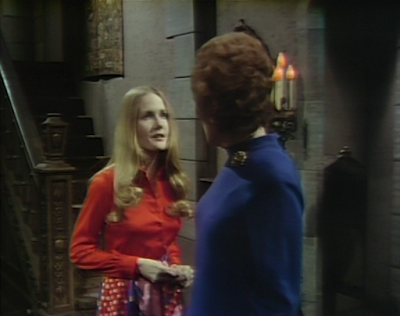 Barnabas arrives at the antique store and asks how Paul got in. Megan says he must have taken her keys at Colliwood.

Philip listens outside the door to Michael's room. As Barnabas and Megan arrive, he says there has just been breathing. They all go inside. Barnabas tells them to go downstairs and set up a cot. The creature sounds agitated as Barnabas says he is taking the man out. He commands it to stay where it is. He says he is the master, and he is taking the man out. He escorts Paul out of the room, and they take him downstairs. 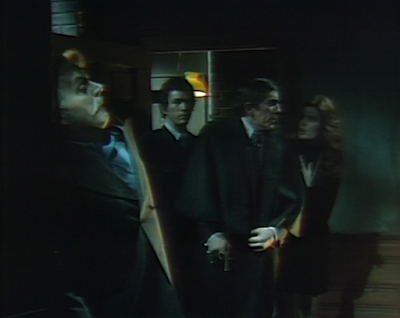 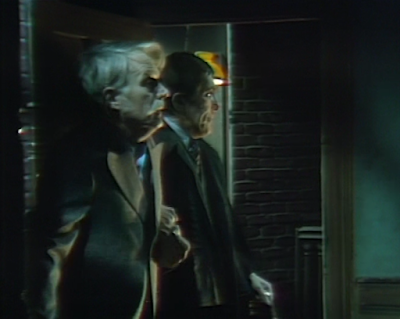 At the Inn, Julia says her father isn't at The Blue Whale or the Inn. They keep searching for him.

Barnabas and Philip lead Paul to a cot in the basement. They lay him down and cover him. They hear someone entering the shop, and Megan goes upstairs. Barnabas says Paul appears to be in a state of shock, and sends Philip upstairs. 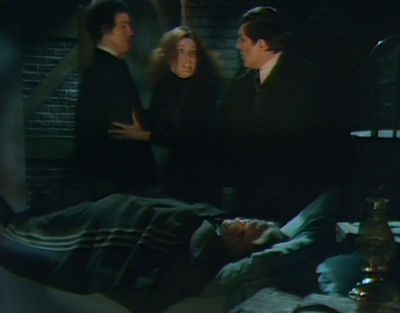 Megan comes upstairs and finds Carolyn and Julia. Carolyn says they're looking for her father. Julia suggests that they go to the police. Philip asks if he may have already returned to Collinwood.

Paul starts to get up, and Barnabas tries to hold him down. He knocks something down.

Hearing the sound, Julia asks what that was, and wonders if anyone else is there. Philip says they're all alone. 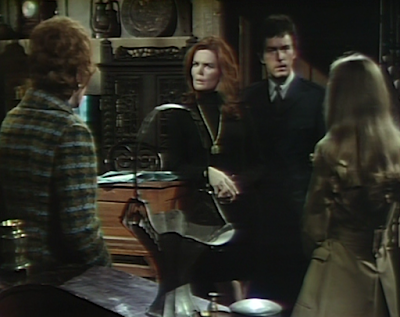 Megan tells Carolyn that she hopes his father is alright. Philip comes upstairs with an oil lamp he blames for making the sound.

Julia suggests that Carolyn return to Collinwood, and she'll keep looking for him. 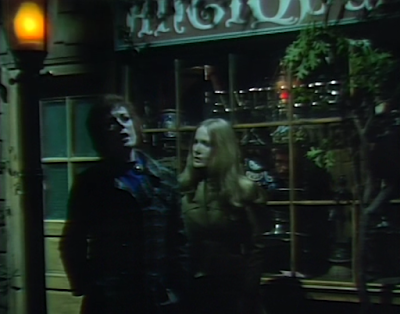 Barnabas comes upstairs. Philip asks about Paul, and Barnabas says he's locked in the basement. He says they'll start drugging him in the morning. Megan says he should become one of them, or disposed of. Barnabas admonishes her, yelling that there's to be no killing, and asking if she's so indoctrinated by his thinking... then stops. She asks if he's alright. Philip says the real problem is upstairs. Barnabas says they need to ensure the door upstairs is secure, and they are not to go in there. Barnabas leaves the antique shop. 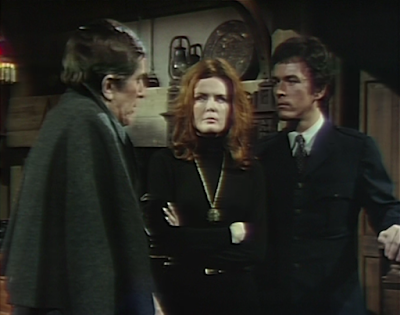 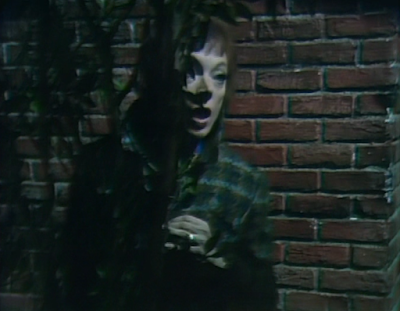 Megan sends Philip up to bed, saying she'll bring him a sleeping pill.

Upstairs, Philip listens at the door. He doesn't hear anything. Megan joins him, and asks if they should check on him. He reminds her of Barnabas' orders. She asks if he noticed something different about Barnabas. She's questioning his judgement. He says they can discuss it tomorrow, and tells her they should go to bed. 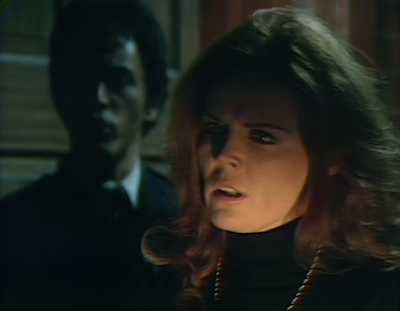 Paul lies in the cot downstairs, muttering to himself.

Philip is in bed asleep. Megan asks if he's awake. He doesn't respond. She leaves the room.

Megan goes to Michael's room and unlocks the door. She leaves, and The handle turns and opens.

Megan listens to the breathing in the hall from inside their bedroom.

Something makes its way downstairs to the basement.

Paul smells something that reminds him of the room upstairs. He hears a breathing outside the door. He thinks it's his imagination, and then realizes it isn't. He thinks the creature is coming for him, and he has nowhere to escape. He picks up a chair and brandishes it. The noises outside the door grow louder. 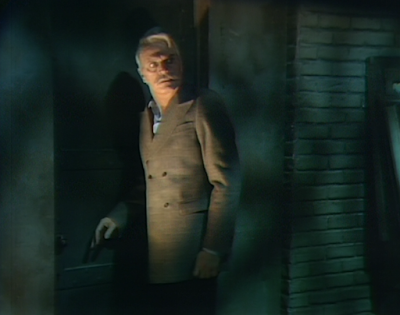 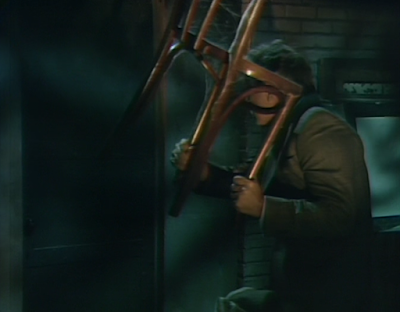 John: Sadly, Paul's encounter with the creature was anticlimactic. I'm not surprised that we still haven't seen 'it' yet, but you'd think he might have been a little worse for wear after spending time alone in its room.

Christine: It was pretty disappointing, especially for a Friday. We should have at least gotten some torn clothes or messed up hair. That's not too much to ask. 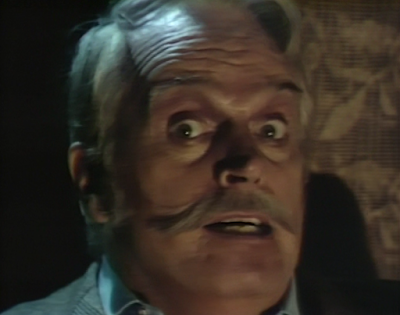 John: We almost got a Barnabas/Julia reconciliation... it seems like that might not be far off (finally!).

Christine: It is odd the way Barnabas seems to have thrown off most of the shackles of his Leviathan possession. I wonder how he was able to do that. Maybe it wears off after a while.

John: Boy it almost seems like they're going to have to show us something next week, but I'm already disappointed that it will probably just be the next slightly taller, slightly older blonde kid from central casting...

Christine: Maybe we'll get both the blond kid and whatever the budget and chromakey allows in portraying the Leviathan kid in its natural state.
Posted by John Scoleri at 6:00 AM