In the antique shop, Philip goes upstairs. Michael tells Megan that Philip will never understand him, and they will fail as a result. He says that Philip doesn't really believe in their cause. He touches her cheek, and asks her if there's anything more important than what they believe in. She agrees. He tells her that Philip shouldn't be one of them anymore, and she agrees. He tells her that she'll do something about it, and she says that she will. Michael leaves the antique shop, and Megan takes a gun from inside a desk. 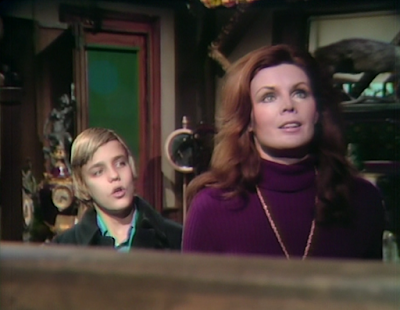 Philip returns to the antique store and asks where Michael is. She says she's sorry, and pulls the gun on him. Barnabas comes in and stops her. He takes the gun from Megan and sends her upstairs. He asks Philip if the boy has been troublesome. Philip confirms that he has. Barnabas says he knew he would be difficult to handle. Philip adds that Michael persuaded Megan to let him stay at Collinwood, and something happened. 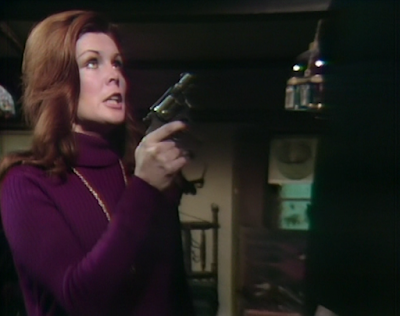 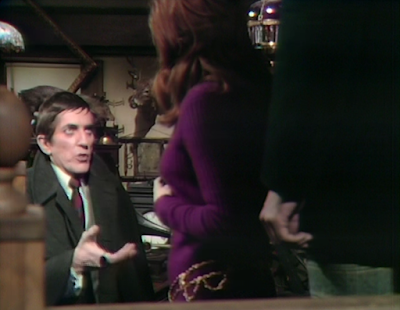 Michael sneaks into Collinwood. David sees him and asks him what he's doing. Michael says he left his book there. David asks if he left it where Maggie is. Michael innocently asks if she hasn't come back yet. David says he knows she hasn't. He takes him into the drawing room and asks him where Maggie is, so they can find her. Michael asks who 'they' are, and David says the police. He says his father is convinced something happened to her. David says they'll be in a lot of trouble when they find her. Michael says that he won't be in trouble. He goes to find his book, and when David says he had better go with him in case he's seen, Michael tells him that he doesn't need anyone. 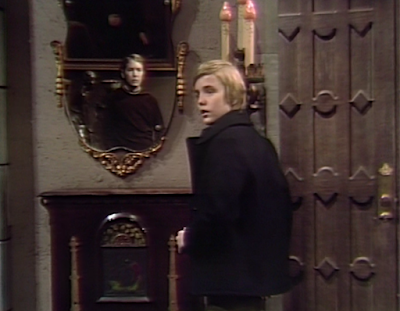 Maggie, still trapped in the hidden rooms, wonders who's responsible for her being trapped. She starts to hear the strange breathing again. She screams out, asking who's outside the room. 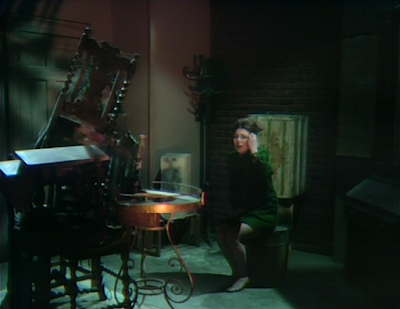 Philip says Michael denied having anything to do with Maggie's disappearance. He says he was about to spank Michael when Megan intervened. Barnabas says Michael must be made to listen. He adds that he must be confined to his room until he's no longer Michael. Philip says they've described him as an orphaned relative, and don't know where to tell them he's gone. Barnabas says his departure will be different than the baby and Alexander. He tells Philip to get the boy. He leaves to go to Collinwood, and Barnabas calls for Megan. 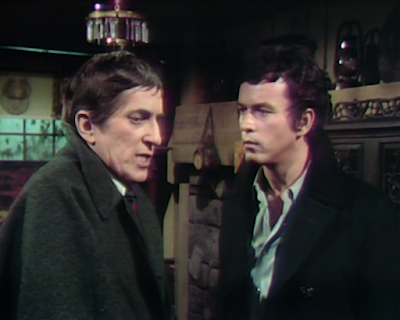 He wonders why sometimes he doubts what he's doing, while other times he's convinced that the cause is right. He realizes it all started when he opened the Leviathan box, and he must find a way to fight it. 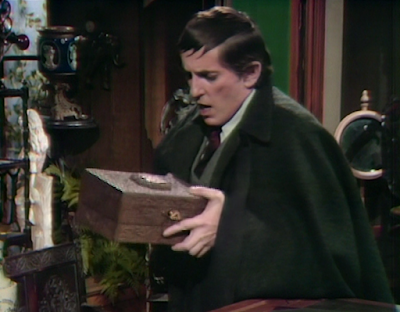 Megan comes downstairs and asks if she will be punished. Barnabas says he understands she thought she was doing right, but she must understand  her responsibility. She says she feels as though she let Michael down. Barnabas points out that Michael causes friction between her and Philip. Barnabas tells her that her first allegiance is not to Michael, but to him. She says she serves Michael. Barnabas says she must reconsider. She says that his is the only cause to serve, and Barnabas says he was just testing her. He adds that she's blind to Michael's faults, and must see him for who he is, and discipline him when necessary. She hugs Barnabas and asks him what they are to do. He says he'll tell her what must happen now, and asks her not to grieve for Michael. 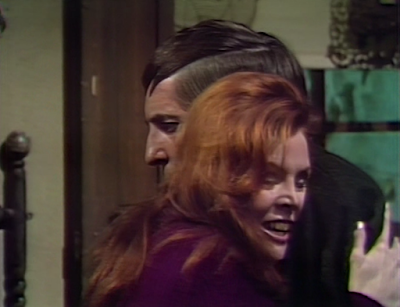 Maggie is frightened by the breathing, which suddenly stops. She then hears a voice calling her name. It says she doesn't have to be afraid. She asks if it's Michael. The voice says he's coming in soon. She begs to be let out, and the voice says that no one else can hear her. 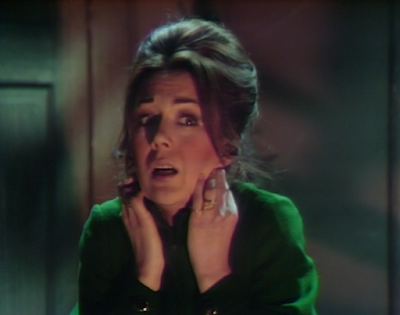 David is pacing in the drawing room when Philip arrives looking for Michael. David says he thought he went back to the antique shop. Philip takes David into the drawing room and asks if Maggie has been found. David says she hasn't. Philip tells him that Michael can't hurt him, and asks him what he knows. He tells him that he's one of them, and he's responsible to help. He asks what they'll do if Maggie is dead. David says she can't be dead, as that would be against the rules. David says Michael promised that he wouldn't hurt her. Philip asks what he knows. David tells him what happened between he, Michael and Maggie last night. He says Michael wanted to play a game with Maggie to scare her. Philip asks where she was last seen, and when David says her bedroom, Philip asks him to take him there. 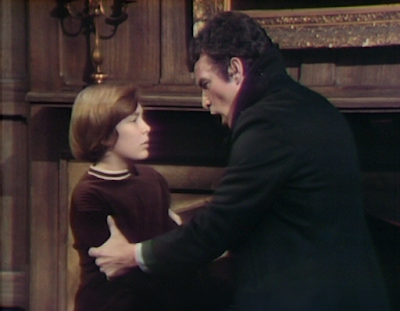 David brings Philip to Maggie's room. Philip asks David if he would have heard Michael lead Maggie into the hall. Philip asks if there's any way out of the room, and David shows him the secret panel. Philip sends David to Roger, saying not to tell him that he's in the house, and goes looking for Maggie. 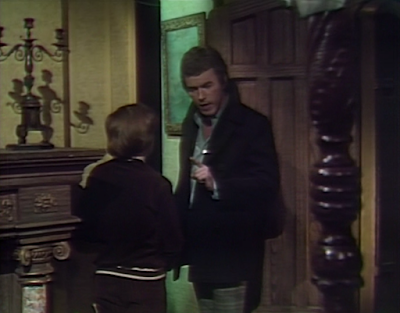 Philip makes his way through the secret passages. After passing through, Michael emerges, smiling. 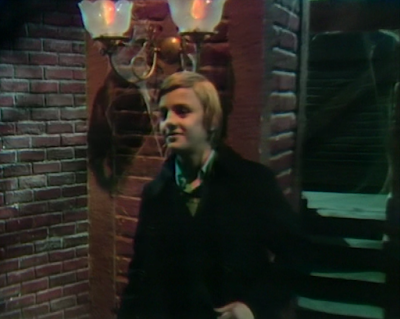 Maggie hears footsteps and picks up a candlestick for protection. She hears the voice saying that he's going to open the door and she'll see who he is. She says if he comes in she'll kill him.

Philip finds a door and asks if Maggie is inside. He opens the door. 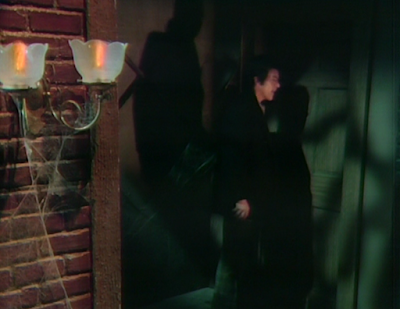 Inside, Maggie raises the candlestick, ready to strike. 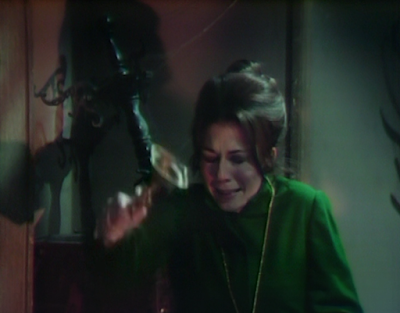 Christine: Maybe nobody can hear her because of the heavy breathing. But seriously, for a house that was built with secret passages and jail cells, soundproof rooms would not be out of the ordinary.

John: So Barnabas was nice enough to share my concern about the waffling between devotion to the Leviathan cause and struggles falling into line. Of course he doesn't provide any information that explains it. I did find it amusing when he tried to convince Megan, and then had to fall back to the old, "I was just testing you..." routine.

Christine: According to Barnabas, it sounds as if the current incarnation of the Leviathan child is about to expire. I wonder if he'll be all grown up by the end of the week.

John: I expected that Maggie might knock Philip out with the candlestick today, and reveal tomorrow that he's only unconscious and not dead. Since they didn't go that route, I'm less sure. Perhaps Philip will be meeting old man Death who has been hanging around Collinsport.

Christine: That certainly would be to Michael's advantage, though I expect she may be sharing a room with loco Paul Stoddard once she starts babbling about how Michael locked her up and breathed heavily through the door at her. 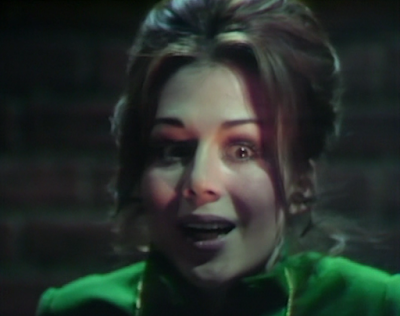