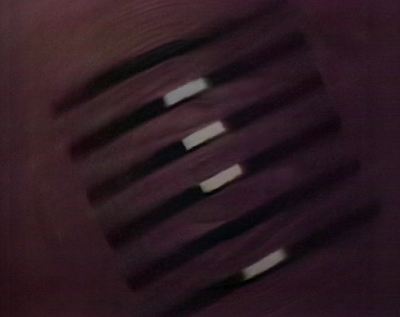 Petofi envisions the door with the I Ching hexagram. He approaches it and it opens. He steps through and it shuts behind him. He sees the gypsy scimitar slicing through the air. The blade approaches his throat, and he says that it has no power to destroy him. If it did, it would know to strike at his hand, not his throat. 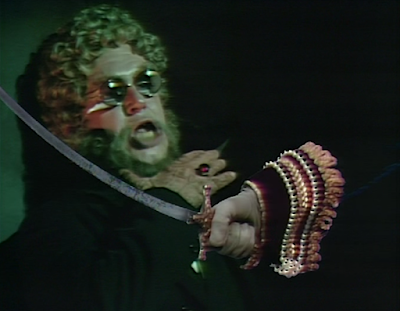 Julia watches over Petofi as he describes darkness, and then passes out. She starts to sneak out when Aristede stops her. He asks how she thought she'd get past him. She says she doesn't want to be there. He says that none of them do, but they must until they master her secret of time travel. 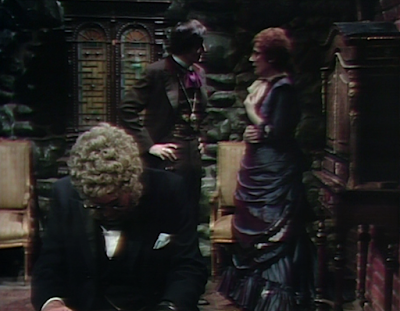 He asks what she's done with Petofi, and she says he's in the deepest part of his trance. He asks how long he'll stay that way, and tells her if anything happens to Petofi, she's as good as dead. 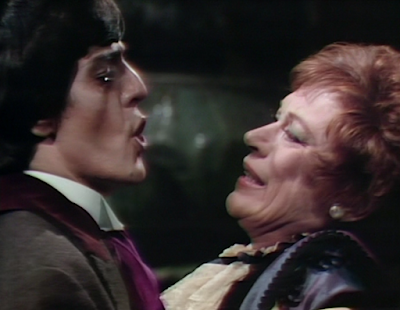 Petofi finds himself in a curtained room. He hears singing. He looks around the room and realizes that he's in a gypsy tribunal, and they're coming for him. He opens a set of double doors and sees Barnabas' face, fangs bared. He shuts it and opens another door to roaring fire. Suddenly, his magic hand begins to choke him. 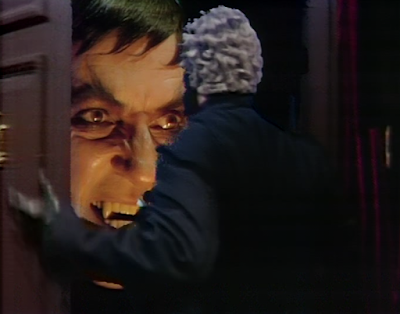 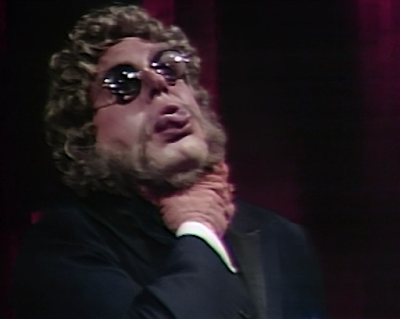 Aristede asks what's happening to Petofi, as he groans and struggles. Aristede tries to wake him. Petofi's hand clutches his own throat and he stands up as it starts to choke him. Aristede pulls the hand away. He orders Julia to revive him immediately. 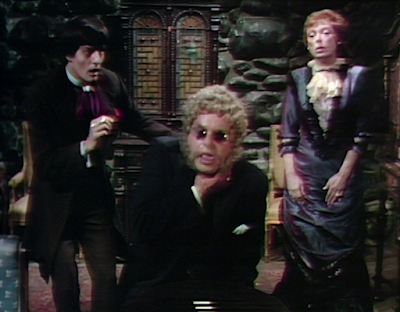 Barnabas waits in the woods. Beth leaves Collinwood with a packed bag when she is stopped by Barnabas. He tells her someone's life is at stake. He tells her he's sorry about what happened between her and Quentin, and asks her to help him. She says he can force her to help him, and he says he never meant to hurt her. She says Quentin hadn't either. She asks if Magda can help him. He says he can't find her, and he can't currently trust Quentin. He says that a friend has been abducted by Count Petofi, and he needs to know if she's alright, and where she's being kept. He says he cannot go, and he just needs her to confirm his suspicions. She agrees to help him. 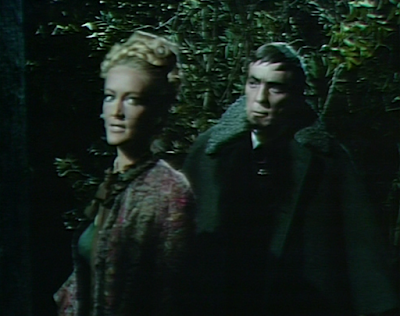 Petofi has regained consciousness. He wipes the I Ching wands from the table, and accuses Julia of lying to him. He asks her to tell Aristede what happened to him. She says she has no idea what he experienced. He says she was in control. He asks her why he didn't go to the future, but instead found himself in the midst of an Etotsi tribunal. She says she doesn't even know what that is. 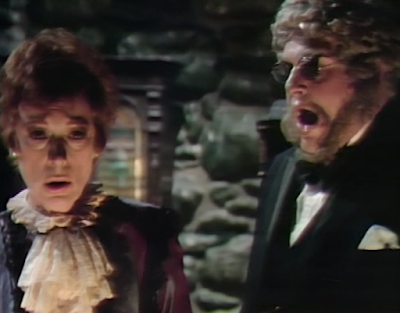 He gives her one last chance for her to tell him how to use the I Ching to reach the future. Petofi says that he doesn't need a servant, but he keeps Aristede on since he personally shuns violence, whereas Aristede has no such scruples. Julia says she doesn't know what he wants to know. Petofi leaves and tells Aristede he can dispose of Julia as he wishes. 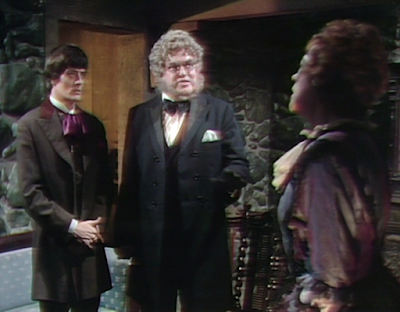 Aristede has tied up Julia. He says he hasn't yet decided what he's going to do with her.

Beth sneaks into Petofi's lair, and hears Julia talking to Aristede. He hears Aristede say he's going to kill her. Beth hides when Aristede steps out of the room. He tells her he's leaving to get some materials. He goes back in with a gun and some more rope. Beth sneaks back out. 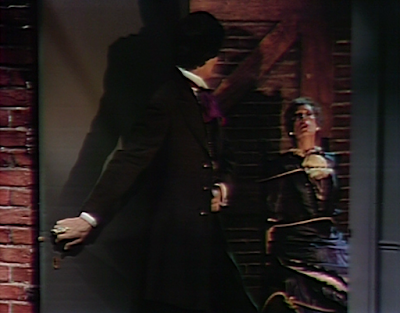 Beth returns to Barnabas and confirms that Aristede is going to kill Julia. She says Petofi is not there, but Barnabas must go there immediately to save Julia. 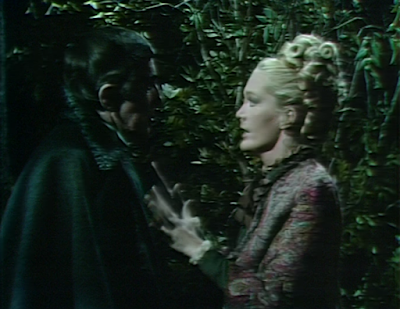 Aristede has created a device that will cause Julia to be shot when someone opens the door to the room. He says that he's expecting Barnabas will come to rescue her, and end up being her executioner. He puts a gag in her mouth and closes the door. Barnabas enters and tells Aristede to tell him where Julia is, or he will kill her. Aristede says there's no one there. He invites Barnabas to search the place, and he opens the door, causing the gun to fire. Barnabas sees Julia in the chair, apparently shot. 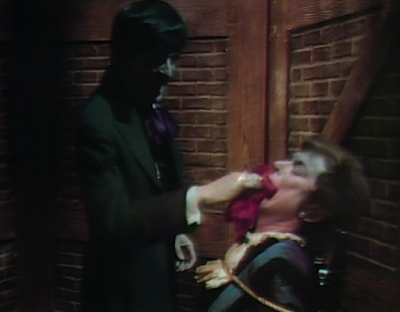 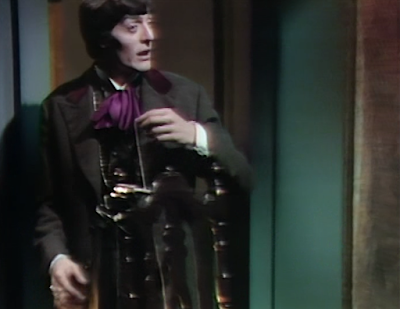 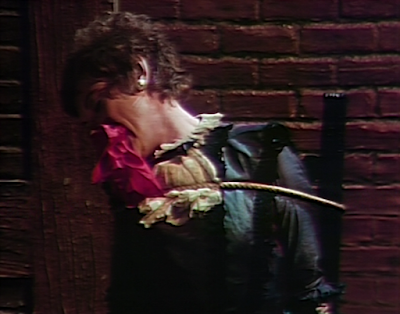 John: Petofi's doorways to doom reminded me of the good old Dream Curse! It's always exciting to see a new set on the show; I hope we'll see more of the Etotsi tribunal in the very near future. And wasn't it nice of Petofi to have told the ghostly scimitar his true weakness? Maybe next time he encounters it, it will go straight for his wrist!

Christine: That was out of character for Petofi, but also for the gypsy scimitar, which should have known to go for the hand without being told to do so. While it's not clear why Petofi can't seem to make it through the correct I Ching door as easily as Barnabas and Julia, it was a fantastically dressed set that was wonderfully enhanced by the Gregorian chants. I love the way Petofi gurgled and lolled his tongue as he choked himself! 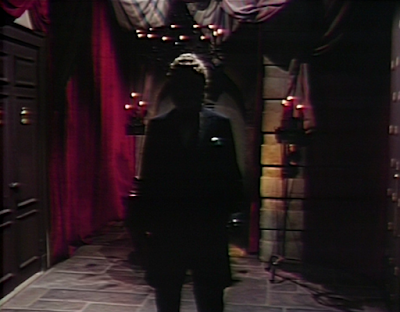 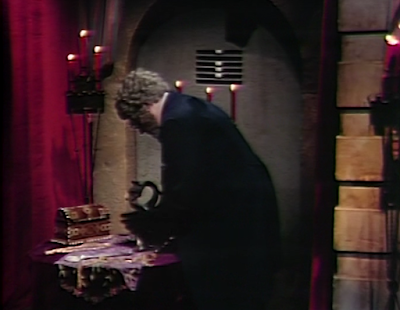 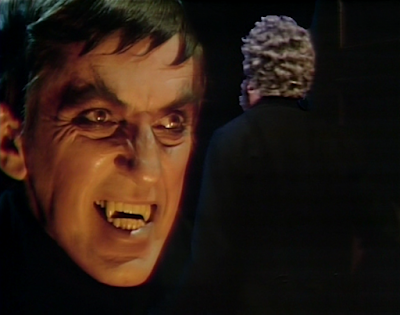 John: I was a little surprised that Julia didn't try to convince Petofi that the I Ching wands brought him to his future... a future in which he had to face the gypsy tribunal!

Christine: You'd think with all his power he'd be able to throw a proper hexagram and direct himself through the correct door. Perhaps it's his evil intent that causes the I Ching to lead him to a bad end.

John: Aristede sure seemed to take no time at all to manufacture his Rube Goldberg device to have Barnabas shoot Julia. I'm anxious to see if it misfired tomorrow, or if it was loaded with blanks... because Julia obviously can't be dead, right? 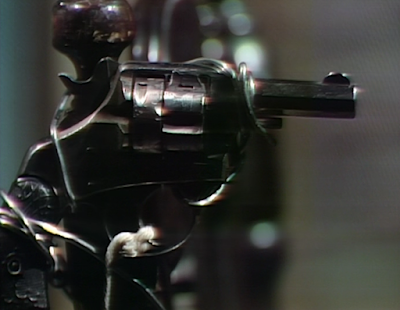 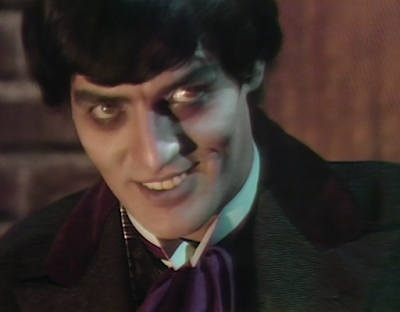 Christine: Julia is in it for the long haul, so she's not dead, though if she is, I expect she'll be revived. Perhaps the scorched string is evidence of a misfire. Hopefully, Julia's near death experience will lead Barnabas to finally profess his true love for her. 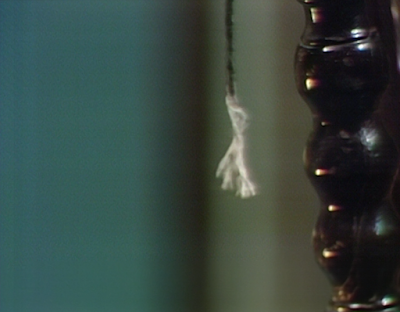 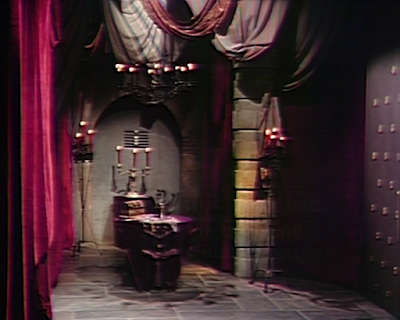