Quentin is locked in his room in an attempt to avoid death. He refuses to believe Jamison would turn on him, nor can he imagine who would try to kill him. 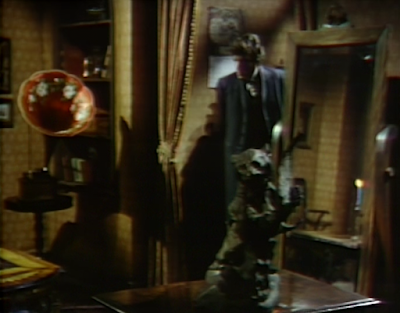 Petofi comes to see him, but he refuses to let him in, thinking he might be the one to try and kill him. Petofi tries to convince Quentin to let him in. He explains Charity saw a vision in which Quentin died before the end of the day, and he wants to guide him safely through the night. Quentin refuses his help. Petofi tells him to stay behind the locked door until after midnight. 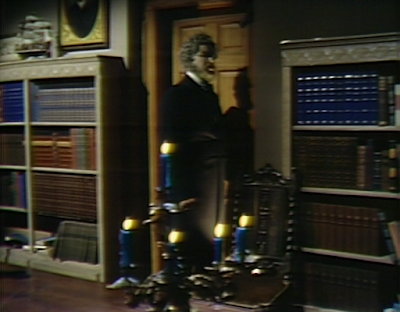 Petofi leaves, and Jamison comes to see Quentin. He asks to be let in. Quentin opens the door. He asks Jamison what he wants. Jamison thanks him for helping him get better. Quentin says he wouldn't let anything happen to him. He says he'd like to spend more time with Jamison after tonight. Quentin says he doesn't feel like being locked up in his room anymore and they leave together. 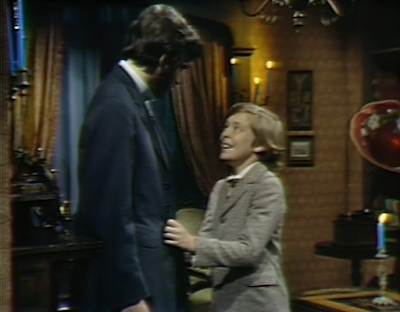 Quentin comes downstairs and runs into Beth. She asks why he ignores her. He snaps at her, and storms back upstairs. Angelique invites her into the drawing room to talk about Quentin. The events play out just as the ghost of Beth explained to Julia. Beth says she and Quentin are getting married, only to have Angelique turn the tables and explain that she and Quentin are getting married. Beth is shocked, and runs off. 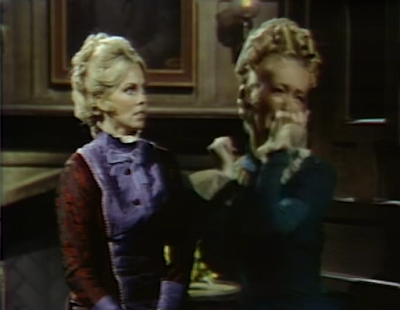 Beth admires a bottle of poison. Jamison comes in to see her. He sees that she's distraught, and realizes she has a bottle of poison. She tells him that Quentin is going to marry Angelique instead of her. Jamison tells her not to cry. He says he won't leave her alone unless she promises not to hurt herself. She does, and he leaves her. She takes a revolver from her dresser, but puts it back. 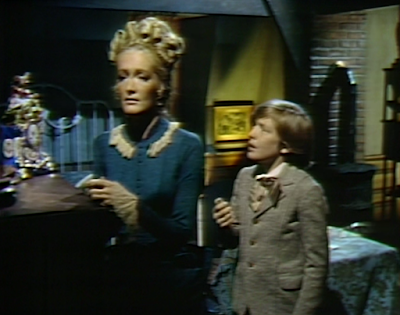 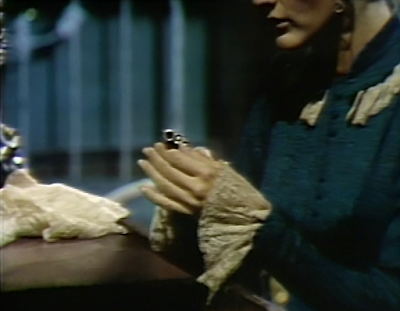 Angelique tells Quentin that she had to tell Beth. They kiss, and Jamison walks in on them. He says he wants to speak to Quentin, alone. Quentin sends Angelique away. 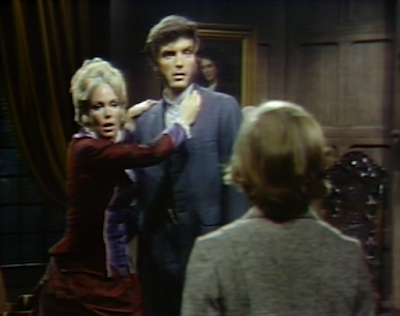 Jamison asks if he plans to marry Angelique, and asks why he would break his word to Beth. He asks why he would make her almost kill herself. Quentin offers to go see her, and Jamison asks him why he did it. Quentin tries to explain, but Jamison won't accept it. He tells Quentin that he hates him, and runs off. Quentin shouts after him that he did it to protect him. The clock chimes, and Quentin locks himself in the drawing room. Beth's gun is on top of her dresser. She picks it up. 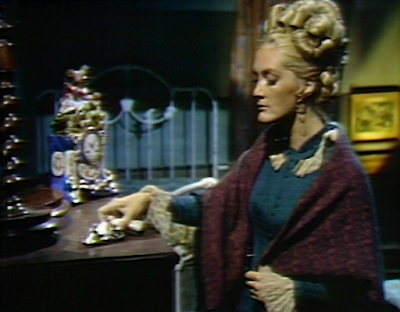 The clock chimes midnight. As Quentin begins to celebrate, Beth knocks on the door. He lets her in. He apologizes to her, and hugs her, explaining he didn't have another choice. She draws the gun on him. He realizes that she's the one destined to kill him. She says she almost killed herself because of him, and now she has to save herself from him. She tells him she can't think of him with another woman. 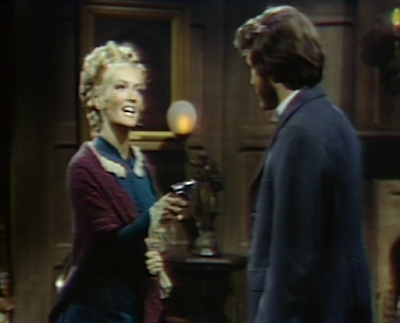 She prepares to shoot him when Petofi enters and demands that she give him the pistol. He takes it, and asks Quentin if he's ready to trust him now. He sends Quentin up to his room, and says he will join him after he attends to Beth. Quentin leaves. Petofi suggests that Beth leave Collinwood, noting that her part in the drama has played out. 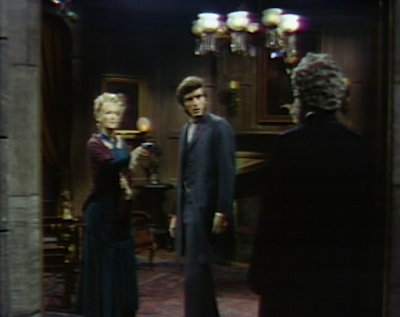 Quentin is drinking when Petofi arrives in his room. Quentin thanks him. Petofi says he did it because he likes him. He says his price is to find out from Barnabas how he came from the future, and how he plans to return. Quentin refuses to help him. 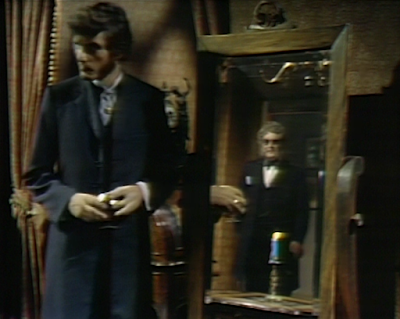 Petofi explains that Quentin is unable to deny him what he wants. Petofi reminds him that he ended his curse. Petofi explains that he commissioned the portrait that took over the werewolf curse. Quentin pulls the painting out of the closet and uncovers it, revealing it's now him. Petofi says that the price of a betrayal of a friend is worth always being able to look like the portrait. He tells Quentin that he belongs to him now. 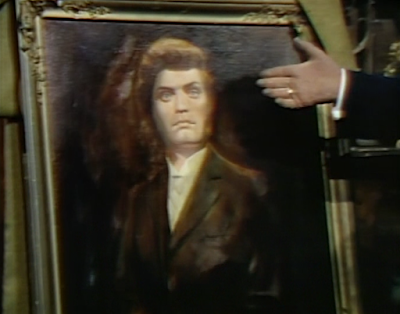 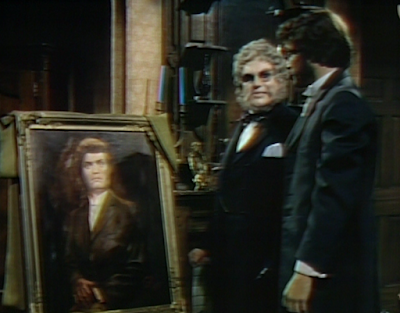 John: I love how we get a calendar zoom-in before the opening credits, just in case anyone has forgotten what day it is today. 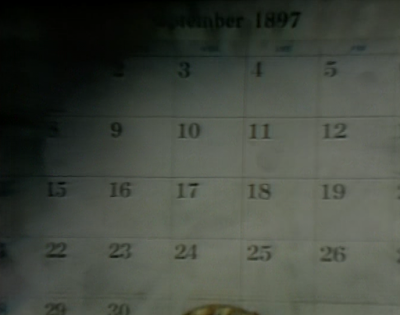 Christine: I was surprised the day wasn't circled in red.

John: It was awkward watching the replay of the scenes we previously saw Beth's ghost describe to Julia. It doesn't really mesh with the preceding scene where Quentin and Jamison left his room together, seemingly to spend some quality time together.

Christine: It was disjointed to have Quentin be chummy and all smiles with David and suddenly become agitated and act rudely to Beth when he encountered her. 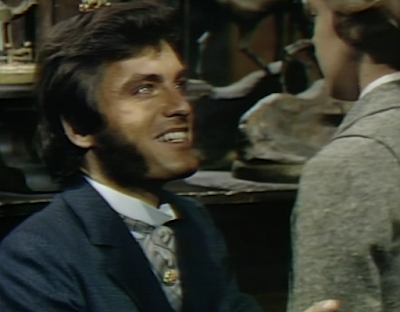 John: Petofi arrives just in time to save the day. Had the scene played out as we had previously seen, Quentin would have already been shot before Petofi stepped in, as Beth pulled the trigger during their embrace. Oh, well. It's a classic Cliffhanger cheat. Petofi goes on to reveal his 'fee' for saving Quentin from his curse (and sweetening the deal by apparently offering him a Dorian Gray deal with the devil, which appeals to Quentin's vanity). I wonder if that portrait will eventually turn up in the future, or if the writers will explain its absence by destroying it sometime between now and then.

Christine: I wonder how future events will be altered as a result of Quentin escaping his September 10th death deadline.